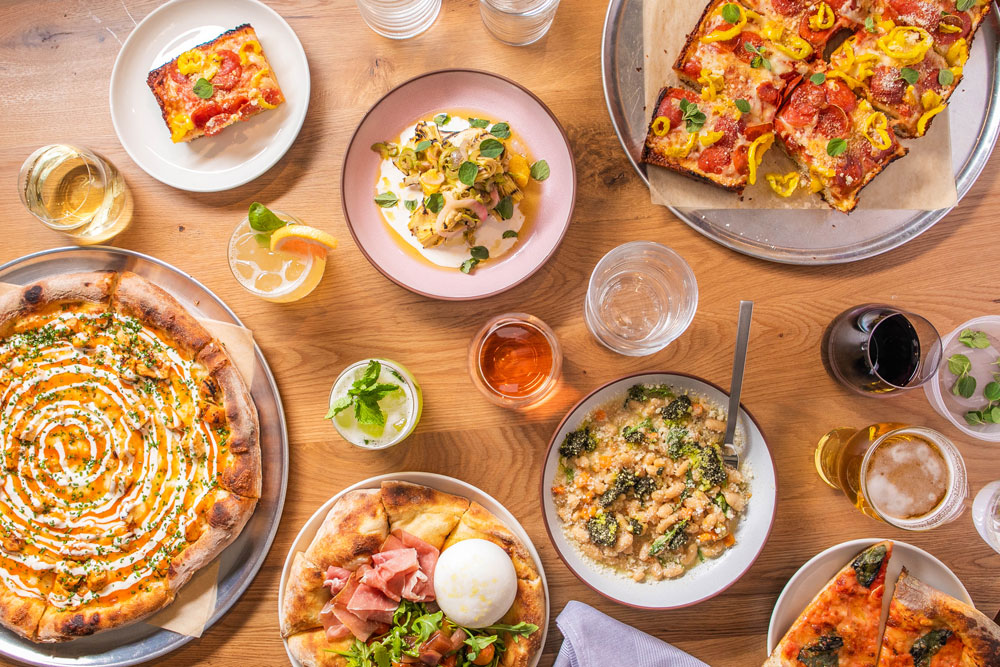 You’re likely familiar with big Burrito Restaurant Group. Pittsburgh’s most established restaurant umbrella was founded in 1993 by Tom Baron and Juno Yoon with Mad Mex in Oakland; a year later, they opened Kaya, which is when now-president and corporate chef Bill Fuller came on board as a sous chef. The following decade brought Casbah, Soba, Umi and Eleven Contemporary Kitchen, four now-closed restaurants, a prominent catering operation and numerous Mad Mex locations (currently 11).

After a 15-year pause in new concepts, big Burrito opened Alta Via in O’Hara in 2019. Ownership toyed with offering pizza as part of the mix but nixed the idea prior to the restaurant opening. Instead, a spin-off was on the horizon: Alta Via Pizzeria, an approachable, full-service yet casual restaurant the group opened in March in Bakery Square. The new concept has pizza at its core along with a varied menu of Alta Via-like dishes such as salads and grilled vegetables, plus a few sandwiches.

In another timeline, Bakery Square owners Walnut Capital might have leaned into trendy national chains such as Sweetgreen, Piada Italian Street Food and Bonefish Grill as cornerstones as it refurbished the Larimer plaza. While there are a few mass-market behemoths such as Starbucks and Jimmy John’s (with an upscale ice cream chain, Jeni’s Splendid Ice Creams, on the way) the prime spots in the center are populated by Pittsburgh-based eateries such as Galley Bakery Square and tako Torta (with a second Japanese-inspired concept from the Richard DeShantz Restaurant Group slated for late this year).

AVP, while far from perfect, is my favorite so far. 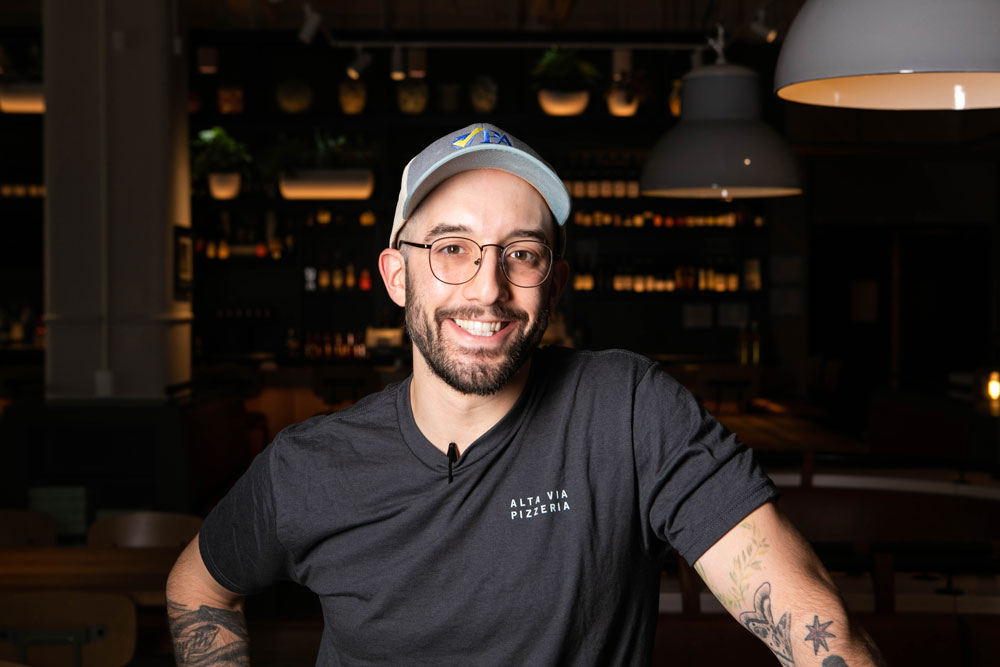 The restaurant group had the organizational capacity to execute it. Big Burrito’s parent company, Whole Enchilada, received a significant amount of federal pandemic support: $7.63 million over two PPP loans and a $10 million grant from the Restaurant Revitalization Fund. The funds were spent throughout 18 restaurants (all open again, though not yet at pre-pandemic hours), the catering operation and nearly 1,000 employees and left them in a stronger position than many restaurant owners in the region. While a version of AVP had previously been in the works for Lower Lawrenceville in 2020 (that project was scrapped due to the pandemic), having the financial assistance, no doubt, helped big Burrito get this establishment built, staffed and running.

Executive chef Darren Layre, an avid baker and former Alta Via sous chef, offers two types of pies at AVP: a 14-inch round and a six-cut, rectangular tray pizza. Both are noteworthy for their flavorful, long-fermented dough, but the round pies tend to be more structurally sound.

Those pies are prepared in the new-American baker style of pizza made popular in San Francisco and made possible on a broader scale by the PizzaMaster, an electric oven that’s all the rage right now because of its easy flexibility and range in temperature control — features you won’t find in traditional wood-fired ovens or the gas-fueled ovens that have dominated pizza in the United States since the late 1940s. You get a hybrid style that has a puffy, eggshell crust giving way to a thinner interior with a gentle tug as you eat it. AVP’s version of it is one of the better bases for round pizza in Pittsburgh. 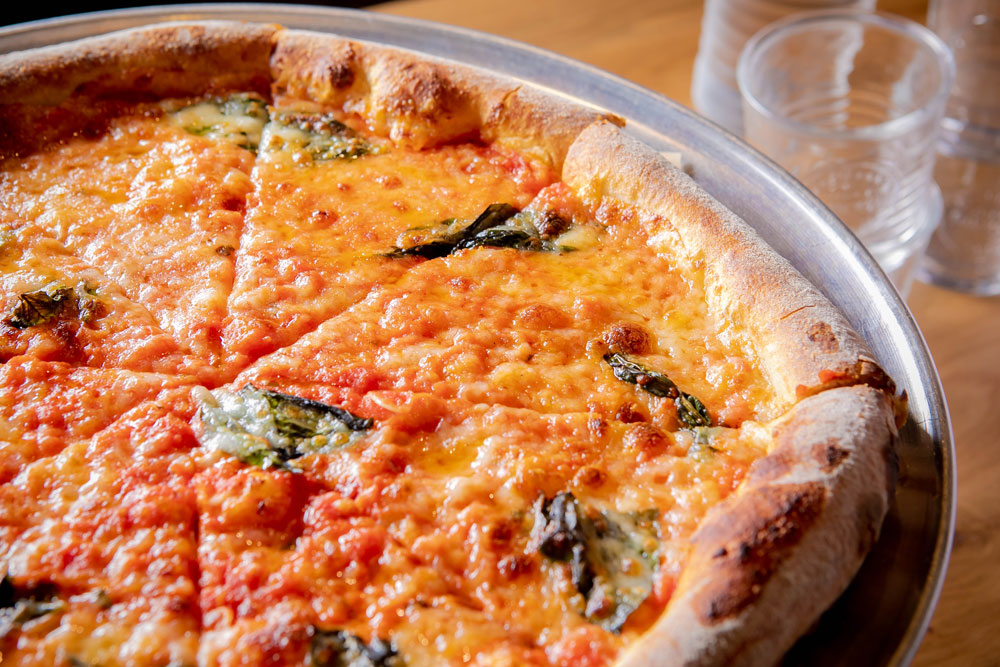 When the tray pizzas work as intended, they imbue the best qualities of crispy grandma-style and puffy, frico-crusted Detroit-style, with none of the greasiness typical of the latter. Often, however, the dough is too dense to enjoy thoroughly. As for the frico, the caramelized cheese lining the outside brings addictive salty umami, but because AVP’s tray pies are less lofty than a typical Detroit pizza, it becomes overpowering halfway through your second cut.

There are a bunch of specialty builds available for both styles of pie. They’re quite enticing on paper but not always executed as they should be. And that’s too bad because perfect pizza is all about balance, and when the harmony is off, the pie doesn’t sing as it should. Once again, the round pies typically were better made, but not always. The Juliet, which should have been a delightful white pie with sausage, charred cherry tomato, red onion and rosemary, had twice as much cheese as needed, which left an under-baked center and our crew’s palates longing for what might have been.

Oddly enough, the most balanced pie I tried, aside from a lovely classic margherita, was the Mad Mex Wing-O. It wasn’t for me, but I can appreciate how the big-flavor crowd-pleaser was executed with thin slices of nicely grilled chicken that someone clearly was paying attention to while cooking (as opposed to the pre-sliced, frozen and reheated chicken you’d find at a chain) and just enough ranch dressing and wing sauce to make it shine. 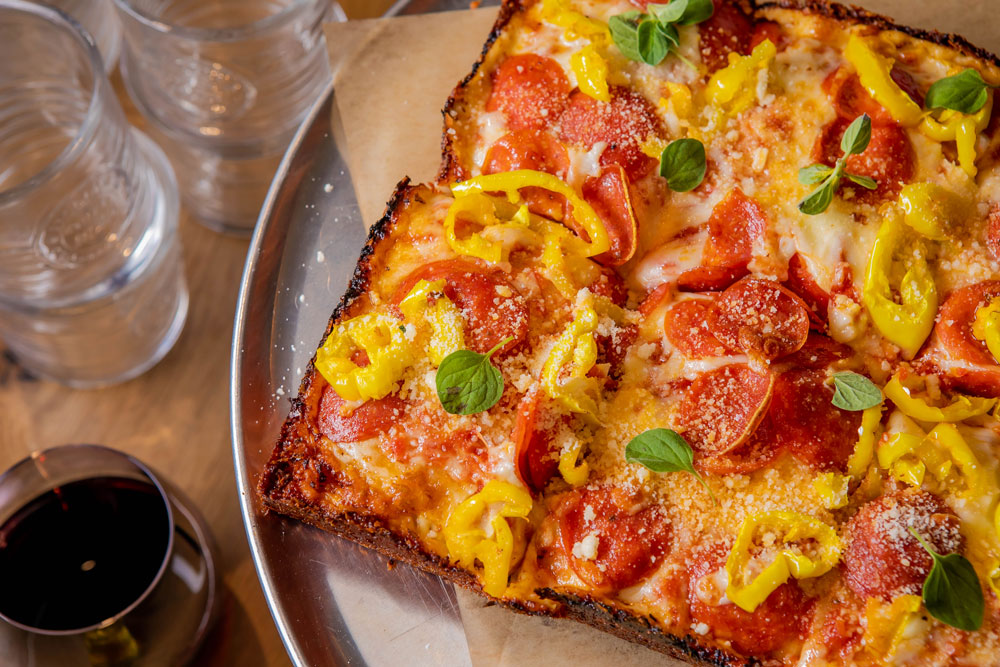 Most of the tray pies I tried looked like they were assembled by a guest who might have snuck into the kitchen after having one too many from the restaurant’s excellent bar program (aside from the Bicicleta cocktail, which stoked memories of sad, flat wine). On one visit, my pals and I shared a pie called Flora; some sections were popping with grassy asparagus and blistered tomatoes, while others were blank spaces of white sauce. Similarly, AVP’s pepperoni classic had mountains of (lovely) pepperoni on some squares, rafts of pickled banana peppers on others and nothing but cheese on one.

The rest of AVP’s relatively extensive menu is generally enjoyable, and it won’t take much to tighten up the items that could use it. The rotating selection of six vegetable dishes pulled from Alta Via’s menu are must-gets, especially the artichokes and broccolini. Both are grilled with smoky char and dressed with just enough oomph of accompaniment to make them shine. And even though you’re almost certainly going to get a pizza at AVP, consider burrata piadina as an alternative (or, heck, get both). It comes with a lobe of creamy, slightly sour, I’m-going-to-fight-you-for-the-last-bite housemade mozzarella and a salad of good quality prosciutto, arugula and cherry tomatoes. The accompanying flatbread, from the same dough as the round pie, is light with a gentle pull and just a slight crispness around the edges.

I don’t think there needs to be a hamburger on a menu that otherwise leans toward Mediterranean and pizza-shop-extras (such as a spicy meatball sandwich that gets props for the Amoroso roll but knocks for the oversized, tacky meatballs that feel prefabricated). Still, they do indeed have one, and the AVP Burger is everything you’d want a double-stacked, thin-patty burger to be, with nice touches such as the addition of punctuation-mark balsamic red onions and bitter arugula. 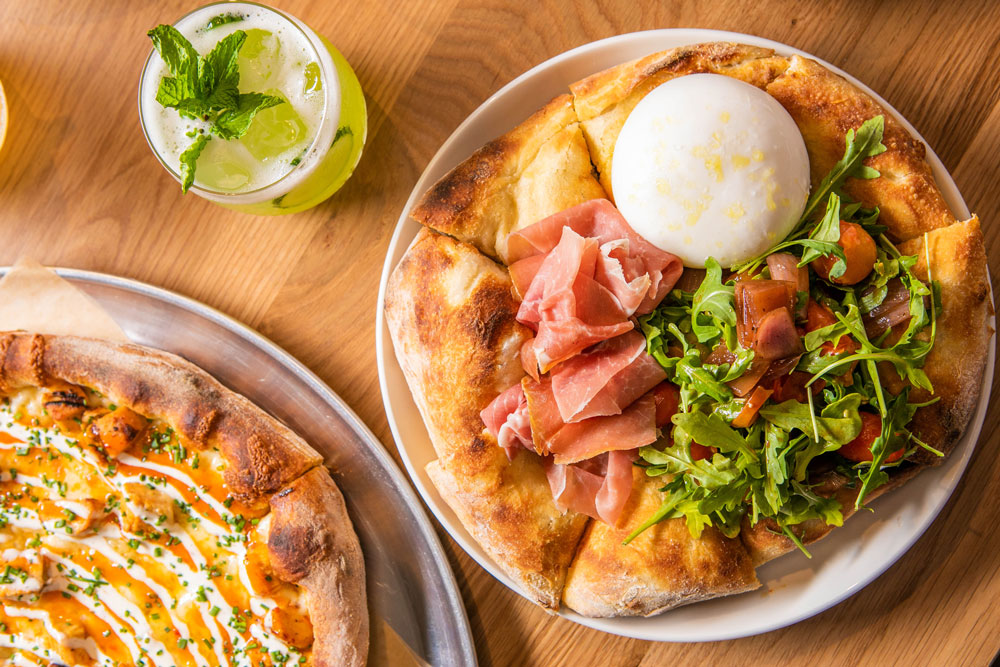 Other dishes miss the mark, but not by much. A grain salad with lentils, farro, Lacinato kale, radish, carrot, citrus, pine nuts and lemon vinaigrette is food fuel you might want after a workout at the nearby LA Fitness but needs significantly more acidity and a couple of pinches of salt to be a star unto itself. Semolina-crusted zucchini is a clever idea for a twist on Pittsburgh’s beloved zucchini planks, but not if they’re cut like shoestring fries. The just-right ones were nice, but most were either over-or under-cooked, and they weren’t very nice to pick up and dip in the zingy red or ranch dipping sauces. You could use a fork, but it’s a weird sharable the way it’s currently prepared. A wider cut would do the trick here.

Be sure to get soft-serve gelato for dessert. It’s thicker than a typical soft serve (closer in texture to a frozen custard), and it’s just what you’d want to finish a meal at AVP. Pistachio, with soft nuttiness and not overly sweet, is a pretty-close-to-perfect rendition of a gelato flavor that almost everybody else messes up. And it’s even better with the addition of toasted hazelnuts, one of the free toppings offered with each serving. Consider yourself lucky if it’s offered when you visit (but don’t hesitate to order a vanilla-chocolate swirl or the flavor of the day if it isn’t).

Big Burrito has long been and continues to be a training ground for the Pittsburgh restaurant industry. That’s quite evident in the youthful but enthusiastic, super-informed and well-trained servers at AVP, who, to a person, made me feel bullish about the future of Pittsburgh’s front-of-house staffing. On every visit, my pals and I felt like our time was valued with check-ins and updates delivered in a way that didn’t make us feel rushed. AVP is very good with the soft touches, too. In a town where you almost always get something the size of a coaster when you ask for a share plate, I appreciated how every table comes set with properly sized plates right when you sit down. Families with small children will be grateful that the establishment offers pizza-themed coloring books and crayons to keep the kids entertained. 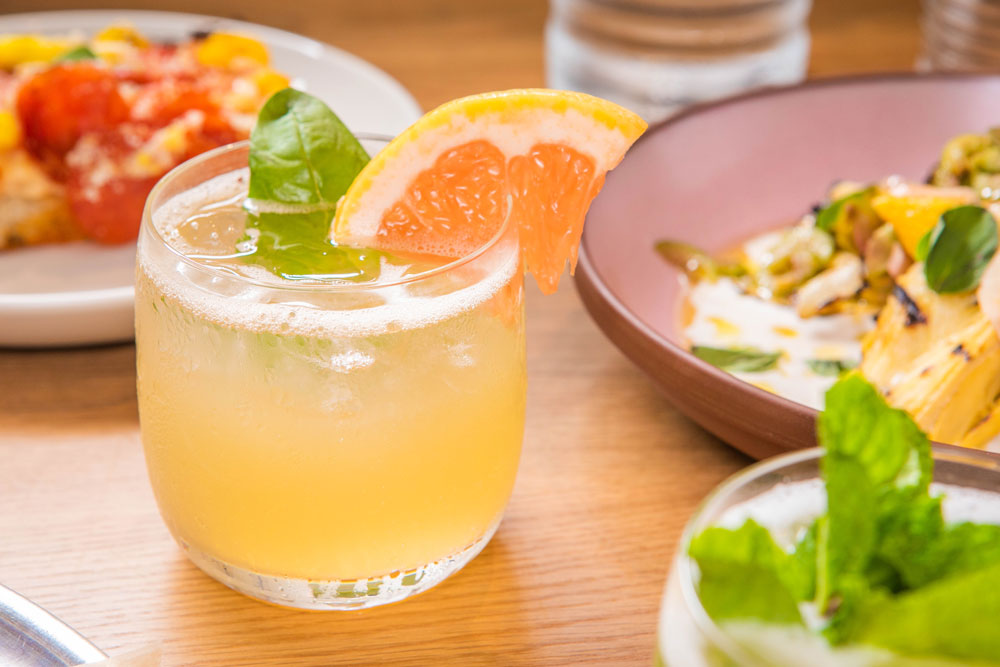 THE AVP COCKTAIL PROGRAM IS LOVELY

Big Burrito hired Karen Herold of Studio K Creative in Chicago for the big picture design (she also did Alta Via’s) of the warm, inviting interior. Baron sectioned the space into zones that break up the space yet keep the energy flowing. The restaurant is very lively. On all of my visits, the establishment was filled with multi-generational family gatherings, boisterous after-work hangs, dudes watching sports at the bar and couples seemingly having lovely dates. And, aside from the music — every time I went, it was a different style, ranging from a nightclub in 2008, songs only your uncle likes to dance to at the bar mitzvah and pop tunes you never want to hear again — it’s a lovely spot to spend a couple of hours.

There’s a glass-box courtyard atrium with an outdoorsy feel (it will make a wonderful winter garden in a few months). And you can pick up pizza at the takeaway window to bring home or enjoy it by the massive screen in Bakery Square’s courtyard.

AVP lands in a good niche between fast-casual and upscale. Big Burrito’s next big thing is a second location of Alta Via that’s expected to open in Market Square later this year, and I could see the restaurant group expanding this concept to multiple locations, too.

This article appears in the July 2022 issue of Pittsburgh Magazine.
Categories: From the Magazine, PGHeats, Restaurant Reviews
Tags: restaurant review