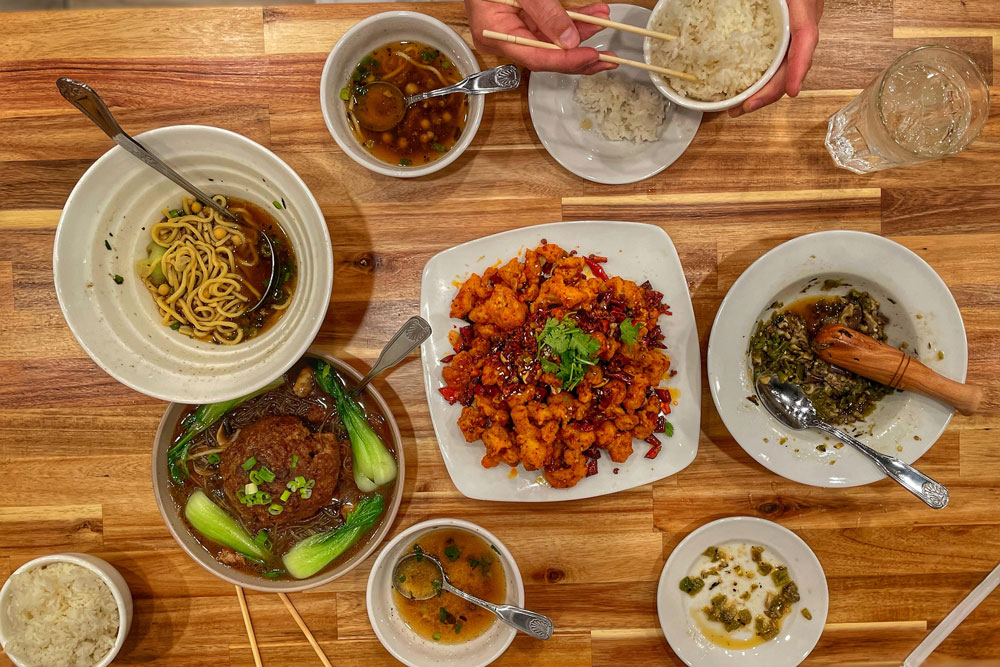 Yue Bai Wei
I’d planned to meet my pal Keith for dinner at Everyday Noodles earlier this week, but the restaurant was closed due to a lingering power failure from the massive storm that ravaged the city. As an alternative, I suggested we move across the street to Rose Tea Cafe — but, to my surprise, another restaurant, Yue Bai Wei, is now operating in the location.

“It was a pretty sudden decision to do this. They were planning on opening a restaurant but hadn’t thought of opening it here. But this location opened up, and they decided it was time to do it,” says Eric Chung. His mother, Alice Fu, owns the restaurant with Zhiyuan Tang and Li Tang. All three were formerly associated with Sichuan Gourmet.

On a 2019 trip to Sichuan Gourmet, a smashed eggplant dish piqued my interest, seeming to suggest a honing-in at the restaurant. That’s when I learned that Zhiyuan Tang, a polished chef who started his culinary career in 1987 in Chengdu, China, had taken over the kitchen a few months prior and was updating the restaurant’s menu. 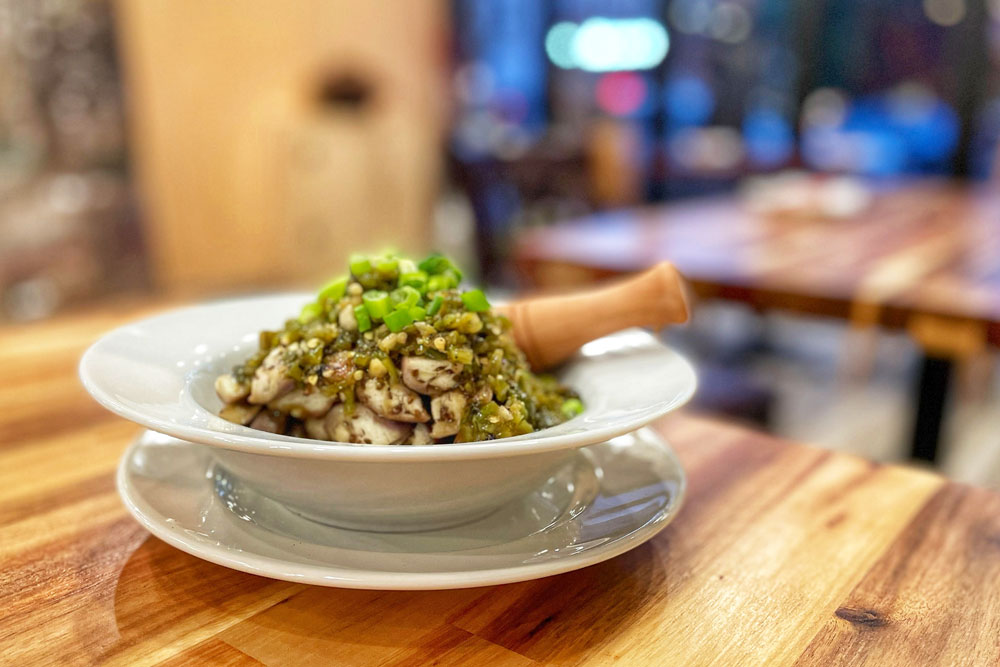 A similar dish, smashed eggplant with hot pepper, caught my attention while eating at Yue Bai Wei (before I learned Tang had left Sichuan Gourmet and now was running this kitchen). Soft, supple eggplant is dressed with a garlicky, sesame-oil-laced pepper sauce that builds in spiciness as you eat it. It’s a compelling dish and one that’s hard to stop eating (and its flavor continues to develop as it sits). It was one of my favorites at Sichuan Gourmet, and it’s even better here. “This is a dish that isn’t afraid to be what it is,” Keith said.

In fact, “this whole restaurant isn’t afraid to be what it is,” was the general impression I felt driving home following my first meal. I was impressed with Tang’s updating of the Sichuan Gourmet menu from one that leaned more toward well-prepared Chinese-American offerings to a more well-rounded one when he was hired as that restaurant’s executive chef, and he seems even more unbridled here. His menu offers a deep selection of Sichuan dishes, and all four I tried were exceptionally balanced, with strong attention to detail and complexity.

Of the better-known Sichuan offerings, I thought Tang’s Chongqing chicken was well-executed, with the crispy chicken and popping spice expected of the dish (though I wouldn’t have minded a bit more numbing Sichuan peppercorn); the addition of peanuts added a contrasting texture. A massive lion’s head meatball (shi zi tou, 狮子头), well-browned on the outside and velvety within, was served with glass noodles, crunchy bean sprouts and al-dente bok choy, all in a sauce rich with five-spice. It’s a complete meal on its own.

The dish I kept going back to was soybean paste noodles with stock soup, a brothy version of a dish called zha jiang mian (炸酱面) that has its origins in northeastern China but is widespread throughout the country. It’s comfort food, and, once again, everything was delicately balanced.

I haven’t yet learned why Rose Tea Cafe closed as quickly as it did; Fu says the three, all formerly associated with nearby Sichuan Gourmet, had already been discussing opening a restaurant of their own. Still, this all happened much faster than expected, and the opening is still a work-in-progress, so expect the menu to change a bit as they get a sense of what works and for the bare-bones dining room to become more decorated as time goes by.

“It’s a competitive area. There are already a number of really good restaurants around here. But they are confident in their skills,” Chung says. After my first visit, I’m confident they will succeed, too. 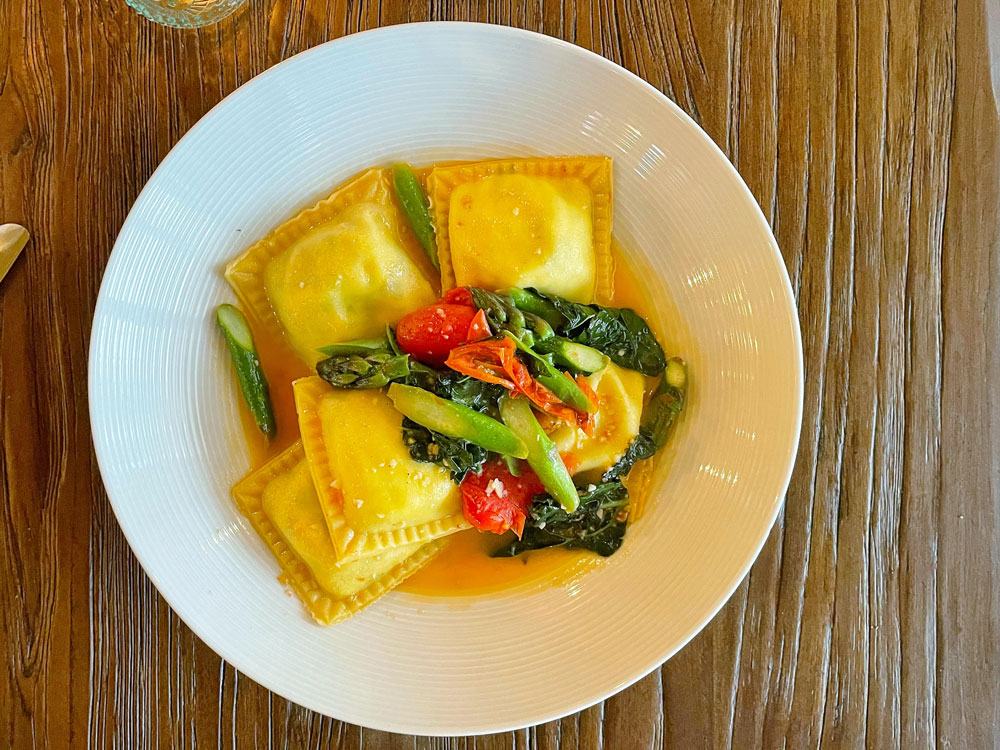 LOOK AT THOSE CHONKY RAVIOLI

LeVia Trattoria
Brothers Christopher and Anthony Castine have heaps of experience in Pittsburgh’s hospitality industry. Anthony spent the past seven years as corporate chef of Burnt Orange Restaurant Group (Sienna Mercado, Sienna on the Square) and, prior to that, as sous chef at Cure. Chris most recently served as chef de cuisine at Sienna on the Square; previously, he worked in both front- and back-of-house positions at Union Standard, Cure, Spoon and Avenue B.

When Sienna on the Square closed last summer as a casualty of the COVID-19 pandemic, the brothers decided to strike out independently. Last month, they opened LeVia Trattoria in the former Cure space in Upper Lawrenceville.

“Our main goal is to be a neighborhood mainstay,” Chris Castine, who runs the restaurant’s front-of-house, says.

When I visited earlier this month, I found a neighborhood restaurant comfortable enough for someone to visit more than once a week if they wanted to walk up for a quick bite — yet also a worthwhile attraction for people interested in venturing out for a nice meal. It’s in line with newer establishments such as Oak Hill Post and Fig & Ash; there’s attention to detail in the cooking and presentation of dishes with service and ambiance that allow for comfortable unwinding over a meal.

Anthony Castine is the executive chef, and he’s offering a restrained menu of Italian-influenced dishes. His handmade pastas are a real standout — I was especially smitten with spinach and ricotta ravioli with kale, asparagus and blistered cherry tomatoes. “Yes!” I exclaimed after digging into the chonky ravioli, which were skillfully made and cooked. Matched with the vegetables, it was hearty but not super-heavy; it felt like a dish we should be eating at the end of spring when the days are warm and evenings are still just a little chilly.

I loved some of the starters, too. Beef tartare had a lot going on for a small-plate menu item. And though I wish Castine cut the roasted cauliflower into slightly smaller pieces, it was an exciting and balanced dish when eating together with the accompanying taleggio cream, honeycomb, crispy capers and toasted fennel. If pork belly is your thing, the LeVia version with braised napa and creamy polenta is so stellar from start to finish that you’ll (like I) wish it were also available in large-plate format.

Look for small menu changes every week or two, and every few months guests can expect more significant seasonal changes. 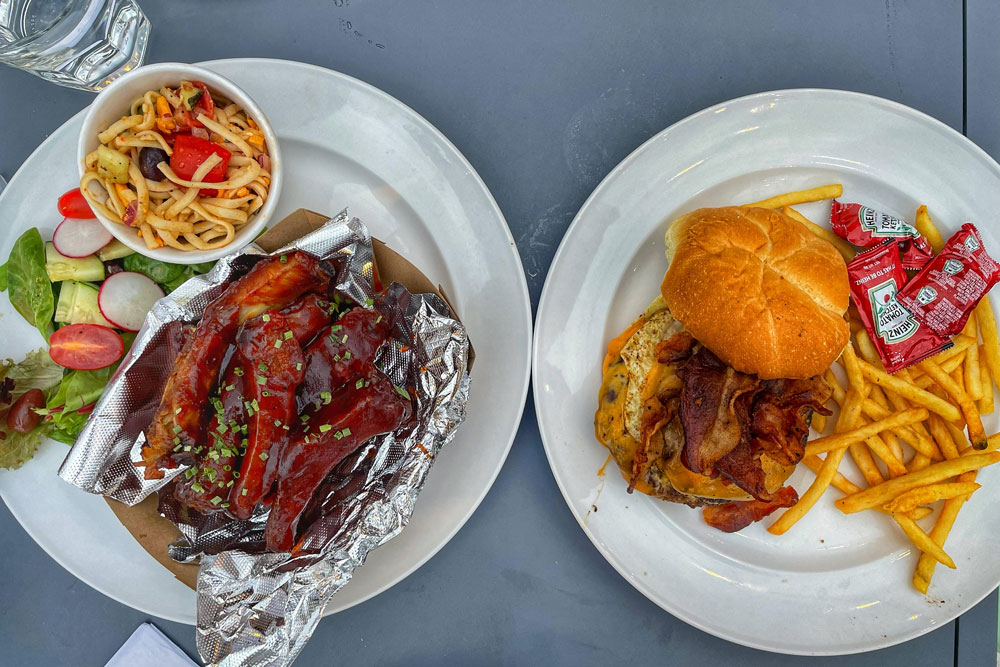 RIBS FROM GG’S CAFE AND A SMASHBURGER FROM BUBBA’S

Galley Bakery Square
A new location from The Galley Group is now open in Bakery Square. It works the same way as Federal Galley on the North Side and the now-closed Smallman Galley in the Strip District — four restaurant owners operate food stalls and the Galley Group runs the bar program.

GG’s Cafe is owned by Meredith and Christine Galloway. It features a comfort-food forward menu of sandwiches, sides such as macaroni and cheese and specials such as roast chicken and baby back ribs. I quite enjoyed the ribs, which were tug-off-the-bone toothsome.

Bubba’s, an offshoot of radio personality Marc “Bubba” Snider’s Bubba’s Burghers, which has locations in Canonsburg and Triadelphia, WV, features — you guessed it — hamburgers. The burgers are made from daily-ground 28-day aged New York Strip steak blended with ribeye, sirloin and brisket. Bubba’s now-closed original location in Bridgeville made my 2017 hamburgers list — I loved the meaty patties that were seared on a flat-top and finished under a broiler. At Galley Bakery Square, with chef Christina St. Clair at the helm, the burgers served smashburger style and I think will be real crowd-pleasers. I certainly enjoyed mine.

Somi is run by Hoa Le, who also operates Shaka in the Federal Galley and previously ran Banhmilicious at Smallman Galley. Her Galley Bakery Square concept is branded as “healthy Asian comfort food” with a focus on microgreens. Finally, there’s City Fresh Pasta. The eight-year-old business, which also operates a cafe and food truck, offers a variety of house-made pasta, as well as a small selection of sandwiches, soups and salads.