With executive chef Zhiyuan Tang running the show, the longstanding Sichuan establishment now is one of Pittsburgh’s most exciting restaurants. 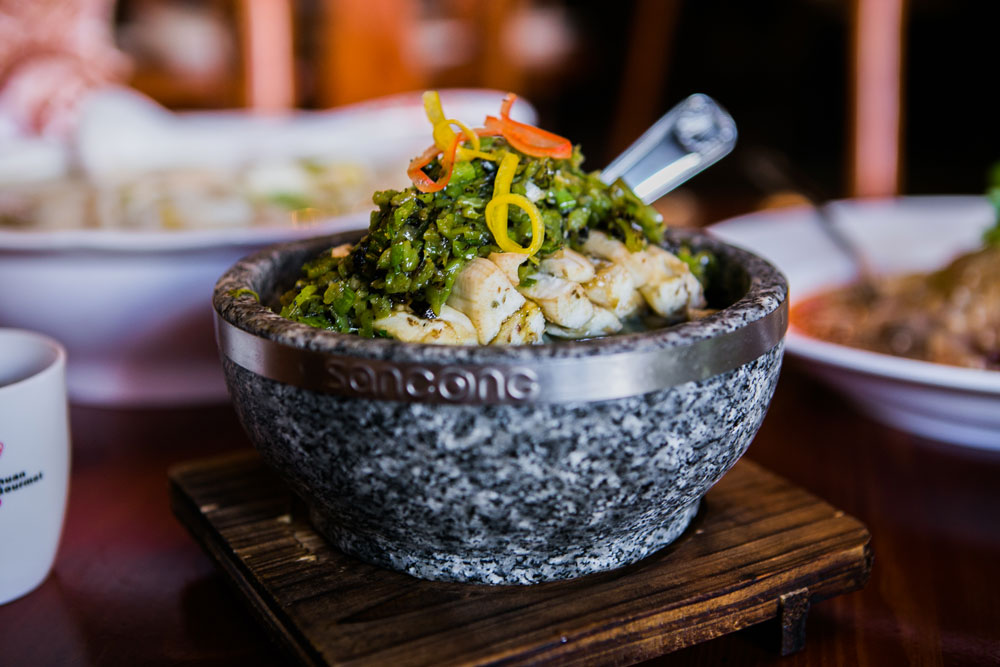 An eggplant dish caught my attention when I popped into Sichuan Gourmet in Squirrel Hill six months ago.

The restaurant’s original location — there’s a branch in Oakland, too — had been slowly introducing new dishes in addition to other upgrades, such as a dining room redesign. And this dish was spectacular, with pillowy wedges of the nightshade laced with sesame oil, pickled peppers and herbs. It wasn’t fancy, though the presentation, which stacked them like a mason building a wall in a little stone pot, was. A few days later, I was already plotting a return visit for more of that luxurious umami.

I’d always found Sichuan Gourmet more of a serviceable, all-around-fine restaurant rather than a Sichuan superstar. But in the past year, the restaurant has upped its game. In a sense, it had to: There are new players in Pittsburgh’s regional Chinese restaurant market, and diners are savvier.

A little more than a decade ago, the restaurant’s co-owner, Weixiang You, was a graduate student at Pitt’s School of Information Science. Surrounded by mediocre Westernized Chinese restaurants, he was having a hard time finding food that he recognized from home. It took him a year, but he finally found a restaurant that satisfied his cravings — China Star, a small establishment near Ross Park Mall. He became a regular and befriended the chef, Wei Zhu. You earned his degree in 2010 but was having difficulty finding a job, so, in 2001, he partnered with China Star owners Zhong Zhuang and Yongpeng Xia on a second location in Squirrel Hill. They brought Zhu with them. The partners soon rebranded the restaurant as Sichuan Gourmet. Zhu left in 2014 to open nearby Chengdu Gourmet, and the restaurant languished for a few years until the owners traveled to China to recruit a new chef — they found Zhiyuan Tang, who ranks among the best in town, no matter what the cuisine, in late 2017. 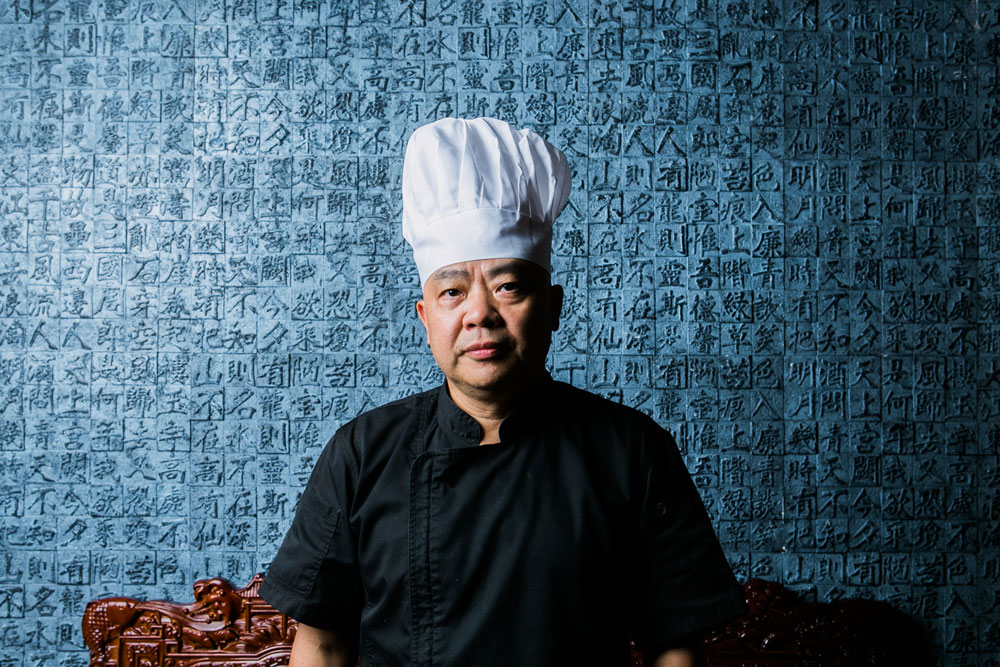 Tang is a pedigreed chef, having started his culinary career in Chengdu, China, in 1987, working his way to earn the highest ranking in the professional Chinese cooking system. It took him a few months to settle in and find his footing; now, he is strutting his culinary prowess by introducing dishes not typically found at Pittsburgh restaurants.

Tang’s cuisine is served in one of the most inviting and comfortable dining rooms in Squirrel Hill. The main floor, with a green, yellow, brown and grey tile mosaic in the center, has comfortable booths and tables for groups of all sizes; if you grow bored talking to your friends, you can watch Chinese culinary shows on the screens hanging on the walls; they’re shot with higher production value than most American food TV. There’s an upstep to a secondary area with a handful of tables built for hot pots, and there are two neatly designed banquet rooms with sturdy Lazy Susans set atop beautiful wood tables. Don’t miss the grey ceramic squares lining the wall in the foyer — it’s Chinese poetry. And do feel free to take one of the small red envelopes hanging from the tree near the entrance; if you find a dollar bill in one, you’re lucky. 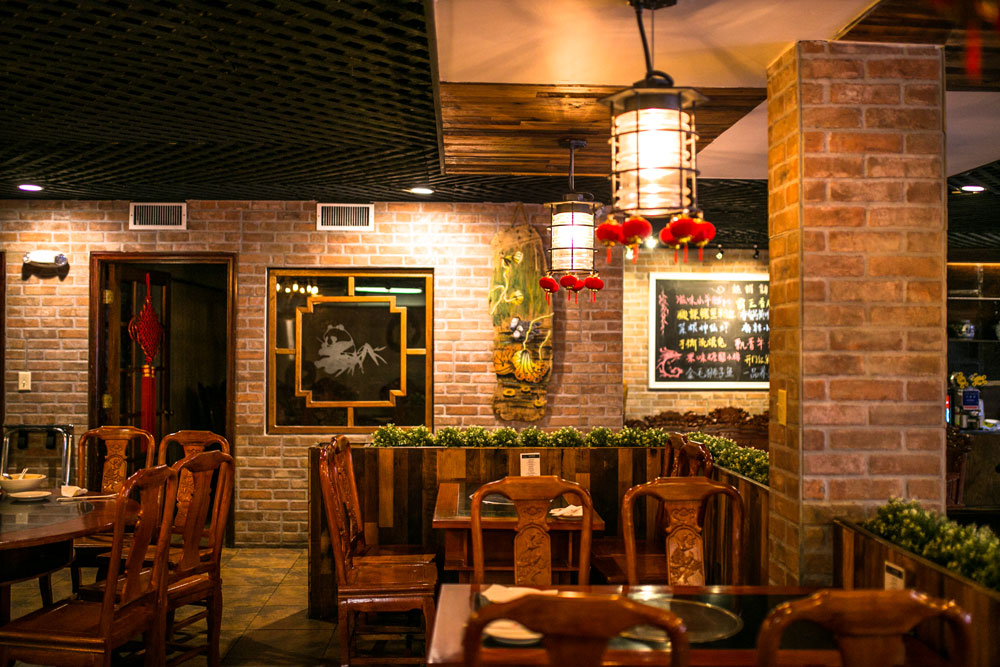 Pay attention to the small printed menu on each table and the chalkboard menu on the wall in the foyer — the specials were among the most enthralling and visually appealing dishes I tried, and they often come with a bit of a show. Crispy rabbit, presented on a bed of puffed rice noodles with flat-leaf parsley and a pickled vegetable flower, is crispy as advertised. It’s mild enough in flavor that it serves a perfect introduction to eating rabbit, and the den of vegetables buried beneath would have made the bunnies that had invaded my garden this summer as happy as they were while eating my parsley.

My friend and I clapped as a server brought the appropriately named flaming beef to the table and continued to cheer as she added more fire upon its arrival. The flavor was as good as the show, with tender, shaved beef, bean sprouts and celery laced in a head-tingling, garlicky sauce. A dish roughly translated as “Nourishing Healthy Tofu” ate like Sichuan spa cuisine: planks of house-made, seaweed-coated soft tofu radiated from a center core of steamed broccoli. Interspersed between the tofu were chopped vegetables, such as carrots, celery, peas and corn, with wee shrimp floating in the mild sauce. It wasn’t the most dynamic dish, though I did find the soothing flavor a necessary contrast to some of the more fiery dishes. 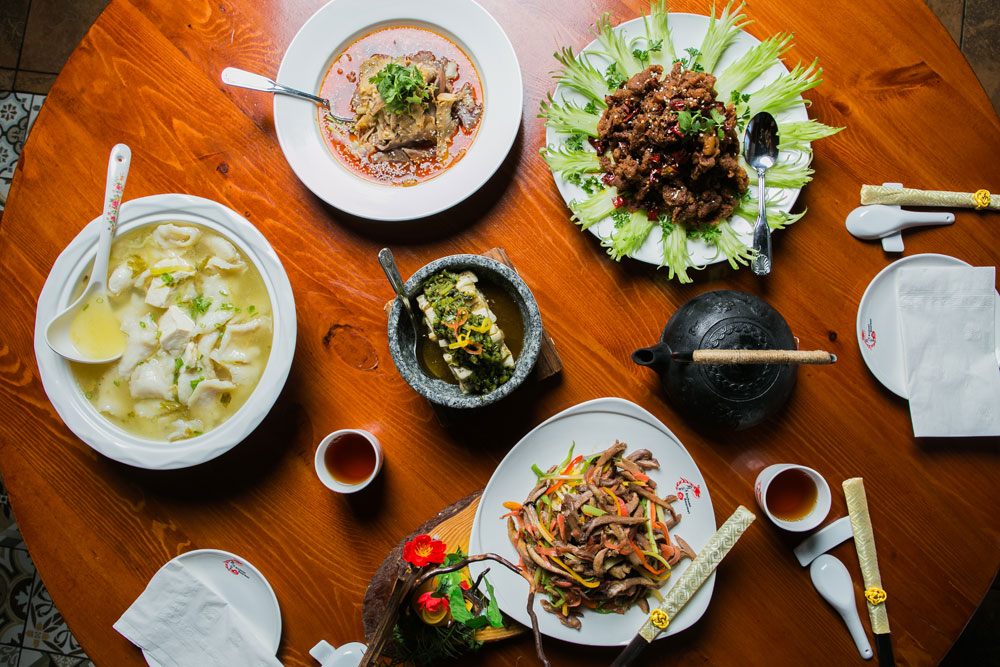 Sichuan dishes that have been on the menu for years have been fine-tuned to stand out. Fish fillets with pickled sour vegetable soup rivals the eggplant and hot peppers for my favorite dish. Our group went ga-ga, then silently meditative, then ga-ga again, while we were slurping it. Two days later, we continued to praise the icebergs of soft tofu and chunks of buttery fish floating in a sour, sweet, deeply resonant yet delicately flavored broth with undernotes of ginger and a heady aroma. It was a nice touch that our server took the time to portion everything into individual bowls, too.

Sichuan Gourmet’s cumin lamb is extra crispy, thanks to a dusting of cornstarch prior to cooking. Its heat is a little less assertive than I’ve found elsewhere, but the cookery is more nuanced, too. It’s a treat to get a cracklin, ma-la forward bite; I wish there were even more of those. Dry-sauteed green beans with pork feature toothsome beans resonant with wok-hei and savory sesame flavor, with a double-down oomph from soy-sauce-laced ground pork. And, I found the sauce dressing the restaurant’s dan-dan noodles enjoyable as there was enough sour and spice to counterbalance the peanut butter sweetness at its base.

On the flip side, some dishes that typically are my favorites fall short. Chongqing chicken, a preparation that often is fought over for every last bite, ended the night in a to-go box; it was gummy and missing the special ma-la zing that has your scalp tingling as you crave for more, more, more. Pickled vegetables and shredded pepper with vinegar also felt a little flat and flabby. 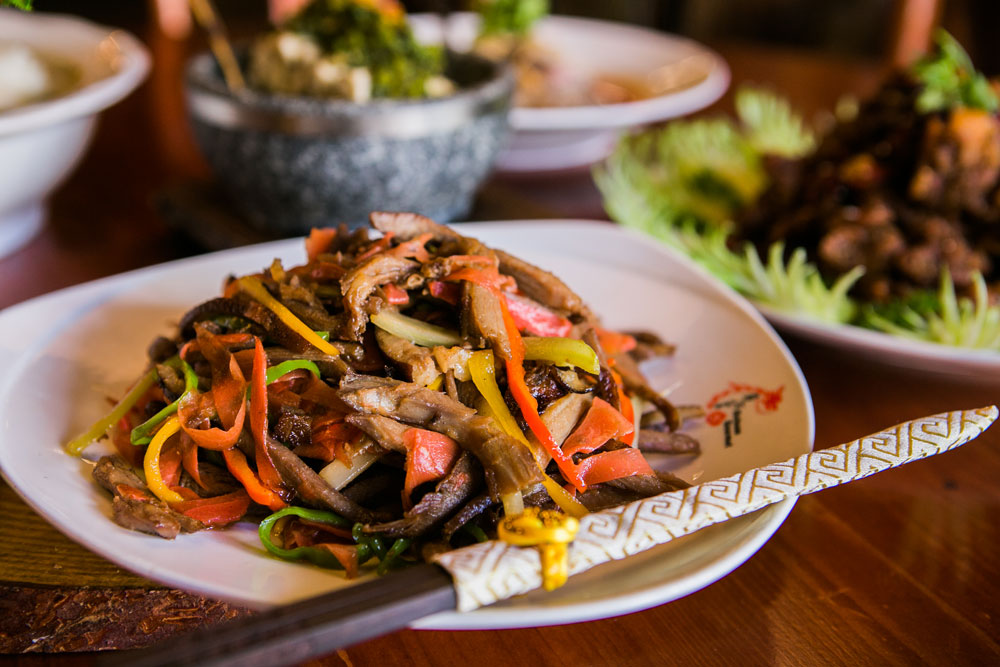 But there are other items you should definitely order. Braised beef with bamboo in a clay pot might come in a steel bowl rather than a clay pot, but it sure is perfect autumnal comfort food, bubbling with luscious brisket and al dente bamboo shoots that look like fingers gesturing “eat me” in a mahogany sauce with a little kick and warm spice. I wish the dish had a little more bok choy; it would have eaten like a complete meal if that were the case. Don’t skip shredded duck with baby ginger, which garnered a round of “Oh wow” from the entire table. The duck is super savory, with Maillard and smoke notes, the ginger is vigorous and the accompanying peppers offer fruity heat. It’s an extraordinarily balanced dish with umami that could lead to easy overeating. 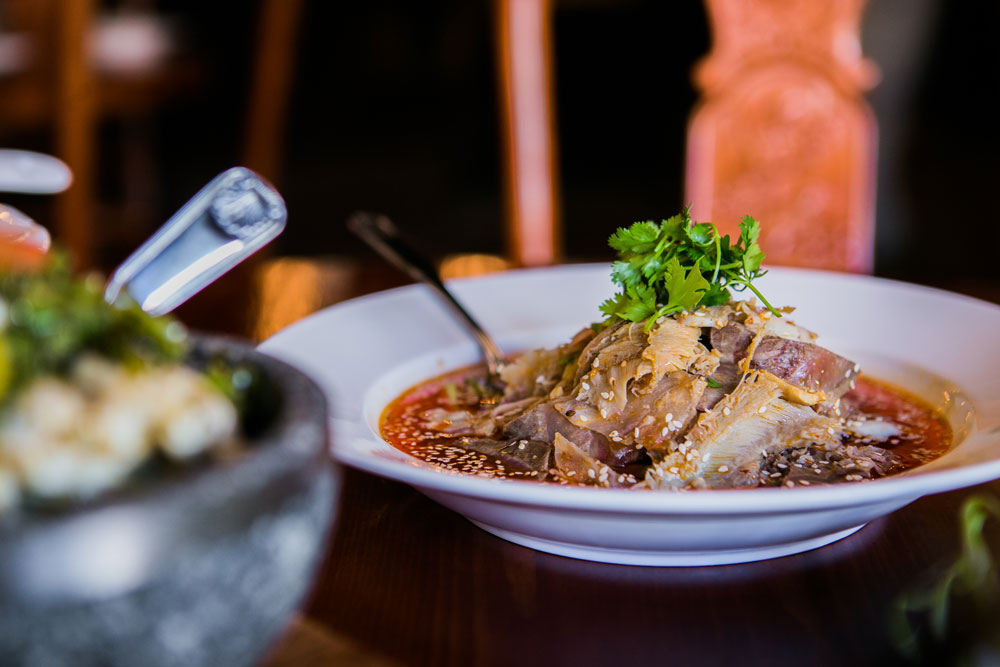 I like how servers here adapt to a guest’s knowledge of Sichuan food. Rather than a “these dishes are very spicy” warning that often comes at Pittsburgh restaurants, a server leaned into our eagerness and guided us to a dish called beef tripe and tongue in chili oil after she informed us the delicious eggplant dish was sold out (sigh, sigh, sigh) for the evening. This was one of the most compelling dishes I’ve had recently. The paper-thin tripe is delicate and soft, the tongue characterized by sweet, beefy flavor. Accompanying it were peanuts, celery, sesame seeds. It was plated beautifully and full of aromatic appeal. There is heat, but it builds rather than hits you over the head. The dish is the best introduction to tripe I’ve had in Pittsburgh.

Squirrel Hill is Pittsburgh’s most captivating dining neighborhood. It’s easy to argue that Sichuan Gourmet, with Tang at the helm, is its most thrilling destination. I’m excited to eat here, often, and I can’t wait to try a dish a neighboring table ordered — lotus and cauliflower in a miniature cauldron swaying over an open fire that looked so much fun that several people took a video of it.