Three openings and a relaunch have my attention this month. 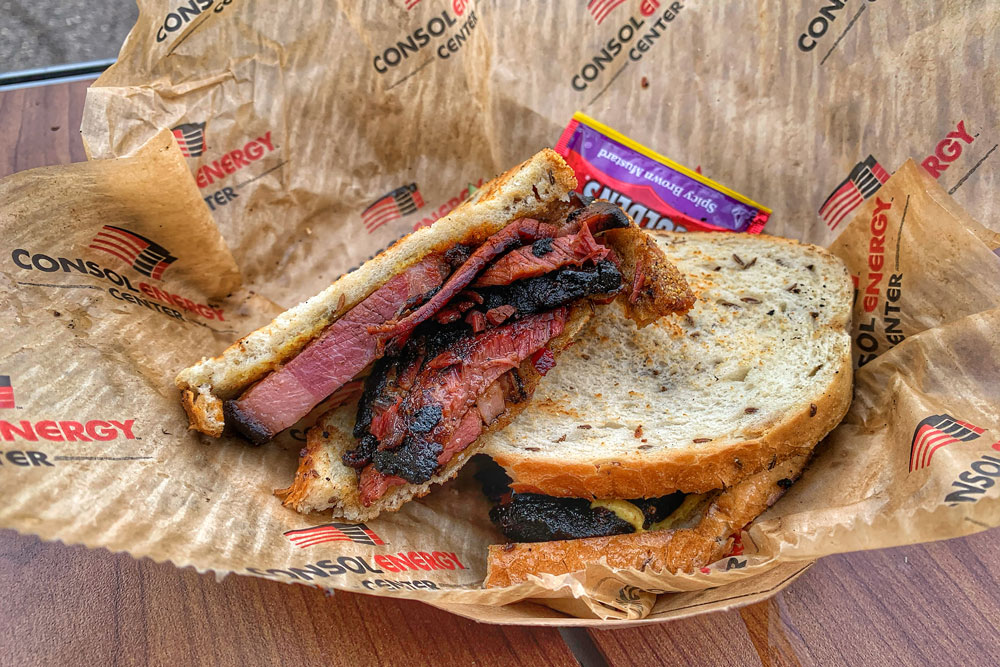 PHOTO BY HAL B KLEIN

Haskel’s Deli
Jon Barr, most recently sous chef at Acorn, is living his Jewish deli dreams on his new food truck, Haskel’s Deli. Barr’s offers his interpretation of Lower East Side deli classics without veering too far from their origins. Pastrami sandwiches are the heart of the modest menu. The tender meat is smokier and less coriander-heavy than you’d get at, say, Katz’s Delicatessen or 2nd Ave. Deli. Barr says he draws influence from the smoked brisket that’s a signature of Montreal’s Jewish delis, and it’s a treat to have something like this in Pittsburgh. Barr is making a shoyu ramen tare for the base of his matzo ball soup broth; it’s richer and sweeter than what you might expect from a matzo ball soup. His matzo balls are sinkers, but even those of us who prefer the floater style will appreciate the flavor and texture of his dumplings. The menu is rounded out with knishes, a seitan sandwich, stuffed cabbage fried rice and slaw. And, of course, a selection of Dr. Brown’s sodas. Look to Haskel’s Deli’s Instagram or website for its schedule.
haskelsdeli.com

Confections by Casey Renee
For the past 18 months, Casey Renee has been crafting her outstanding sweet treats at various locations around town. This week, the former Whitfield pastry chef, a two-time James Beard award semifinalist and one of Pittsburgh Magazine Chefs of the Year in 2016, opened her own space in Wilkinsburg. Although she plans on expanding into a retail operation long-term, the ordering process remains the same for the time being — order Renee’s cakes, cookies, truffles and more online at least 48 hours in advance as everything is custom made. Renee says having a larger, dedicated space allows her the freedom to be more creative, so she’s planning on expanding her offerings, which includes both standard items and seasonal specials. Cake parfaits, for instance, are something she plans on diving deeper into. “I can do a composed dish, which is something I miss from being a pastry chef. It gives me more room to work with fun seasonal things,” she says.
confectionspgh.com

Over The Bar Bicycle Cafe Hastings
The beloved bar and restaurant Over The Bar now has a third iteration, this one in the South Hills. The Bridgevale location, approximately two years in the making, joins owner Michael Kotyk’s original E. Carson Street location (2009) and North Park branch (2011) as part of what’s now a small chain of bicycle-friendly — but, really, friendly to everyone — gathering place. The spacious interior will seat approximately 200 guests at full capacity, and there’s plenty of room for outdoor dining, which is the way to go for the moment. OTB Hastings menu is similar to the two other locations; we’ve previously lauded OTB as having one of the best hamburgers in Pittsburgh, so expect that to be a draw here, too. The rest of the menu is a series of crowd-pleasers, with everything from energy building “healthy ride bowls” to wings and nachos. With Kotyk’s strong track record of offering a great beer selection at his establishments, it’s no surprise that OTB Hastings follows suit with a blend of local and national breweries that’ll please everyone from your keep-it-Miller pal to the microbrew enthusiast.
1595 Mayview Rd., Bridgevale; 412/319-7212, otbbicyclecafe.com/hastings

Allegro Hearth Bakery
Allegro Hearth Bakery is back in business after being closed for more than eight months. Owner Omar Abuhejleh, who also operates B52, put a temporary hold on his Squirrel Hill establishment at the end of March out of public health concerns surrounding the then-emergent COVID-19 crisis. He and his team have spent the intervening time completely restructuring the bakery’s recipes. The most important of those changes — the entire operation is now vegan. Abuhejleh says that, while the recipes are ready, he’s still in the process of bringing the rest of the business up to full-speed. Expect limited hours for the first couple of weeks, with an updated website and online ordering system coming in the near-future.
2034 Murray Ave., Squirrel Hill; 412/422-5623, instagram.com/allegrohearthbakery