Make haste for tacos, pizza and porchetta sandwiches. All three of these fast-casual options launched in May, but they really began to shine this month. 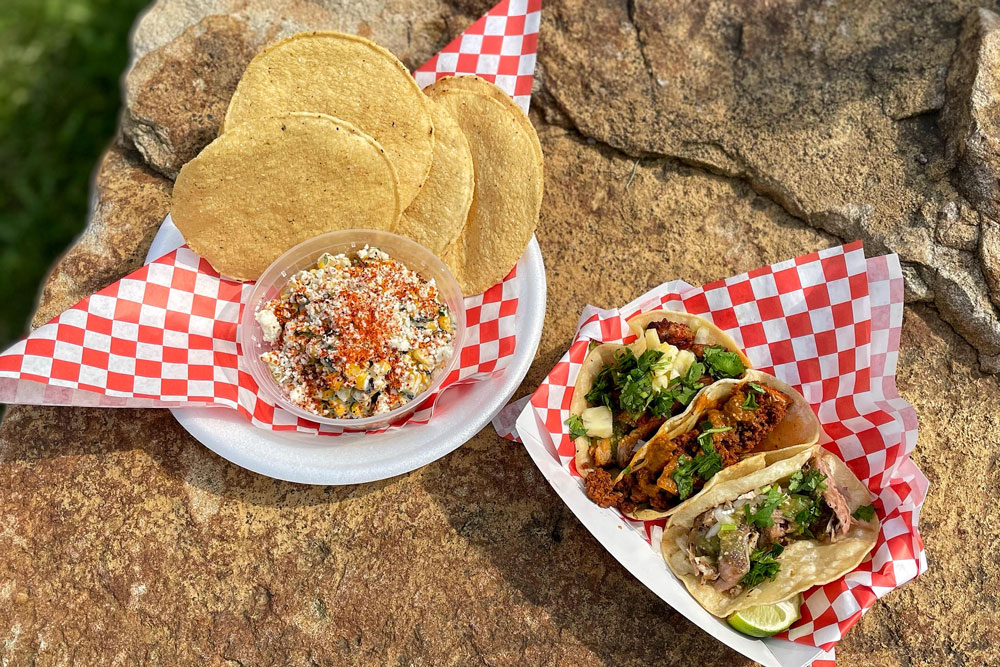 Taqueria El Pastorcito
Jose Tecuanhuehue has been a fixture in Pittsburgh kitchens for more than 20 years ago. The Puebla, Mexico native worked in restaurants such as Hyde Park, Braddock’s American Brasserie and The Cheesecake Factory after getting his start in the city at Casa Reyna in the Strip District in the mid-2000s. While he was taking a temporary pause from restaurants last year to work in construction, he and his wife, Bernice, a native of Oaxaca, Mexico, decided to open a mobile food trailer, Taqueria El Pastorcito. For the past few months, it’s been popping up at breweries in the city and suburbs.

“It’s a street taco place. What we’re doing is very common in Mexico, but you don’t see a lot of it — especially with the flavors we’re using — here in Pittsburgh,” Tecuanhuehue says. “That’s why we’re doing it.”

The specific taco compositions will rotate and on a recent Saturday included al pastor, carnitas, carne asada and chicken fajitas, plus mixed meat options such as chori-pollo and campechanos.

It’s a rarity in Pittsburgh to find al pastor this good; in fact, it’s some of the best I’ve ever had here. Tecuanhuehue piles slices of marinated pork onto a vertical spit, slowly cooking the meat to crispy, fatty perfection. Garnish the tacos with salsa verde, raw onions, cilantro, pineapple and lime juice, and you’re in for a treat. The Taqueria El Pastorcito carnitas are terrific, too, luscious with soft and savory porkiness. And I dug the chori-chicken, a blend of chorizo and griddled chicken breast that worked as a harmony of texture and flavor. Taqueria El Pastorcito currently is using prepared corn tortillas, but Tecuanhuehue says they plan to make tortillas from scratch once they can establish a rhythm or find another employee.

The menu is rounded out with offerings such as veggie quesadillas and esquites, as well as occasional specials such as huaraches topped with beans, meat and lettuce. The esquites, a mix of charred kernels of corn in a tangy, just a little sweet blend of cotija cheese, mayonnaise, crema, powdered chili and cilantro make for an excellent side, a quick snack or even a pizza topping if you happen to order and are making a peach pizza that night (but maybe that’s just me).

Tecuanhuehue says he learned how to cook from his grandmother — “she wasn’t a professional chef, but she was the best cook around,” he says — and that once the business gets moving, he hopes to include some of her recipes, including barbacoa, four versions of guacamole and various bean dishes on his menus.

“We’re trying to find a bigger food truck so that we can add more of the food we want to offer,” he says.

In the shorter term, look for tortas to appear on the menu soon and, once the weather turns cold, white chili chicken with rice.

Taqueria El Pastorcito is popping up primarily at breweries in the city and the suburbs and has a few regular slots such as Wednesdays at Trace Brewing in Bloomfield. It’s best to check the eatery’s Facebook page to know where it will be any given week. 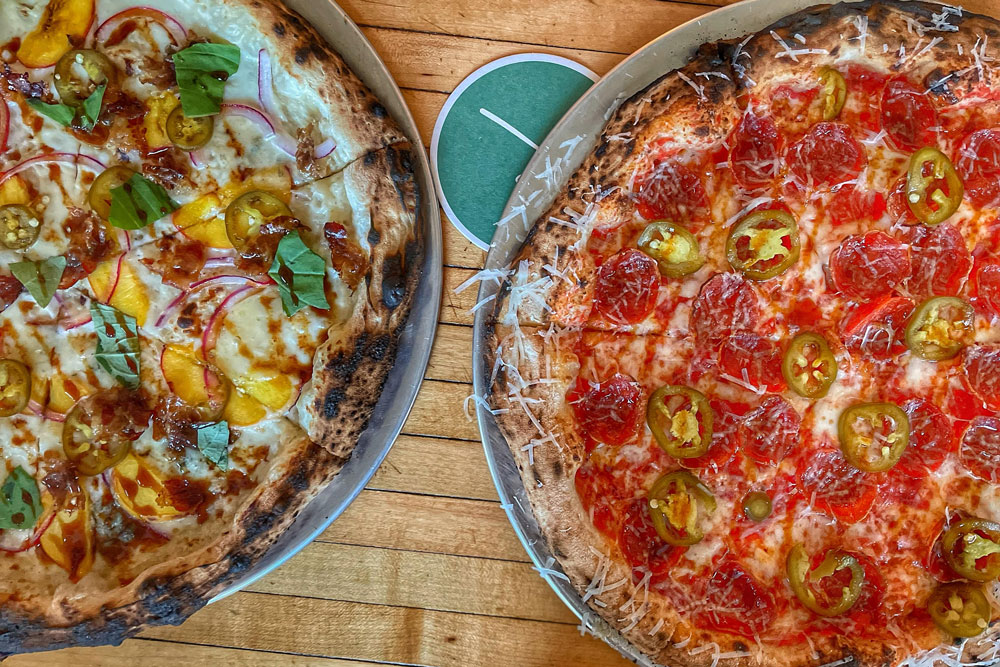 Woodfired by Lorelei
Pittsburgh’s pizza landscape took a knock in June 2020 when Anthony Giaramita shuttered his most excellent pizzeria, Pizza Taglio, to move to France with his wife. The location and its top-of-the-line oven sat idle for nearly a year until the Independent Hospitality Group, which operates the adjacent bar Lorelei (as well as Independent Brewing Company and Hidden Harbor in Squirrel Hill), opened Woodfired by Lorelei in May.

Dan McGhee, who first arrived in Pittsburgh in 2005 to attend culinary school at the now-closed Le Cordon Bleu, is the establishment’s pizzaiolo. As a result of a long career in Pittsburgh restaurants, McGhee brings a wealth of experience to Woodfired. Still, he’s relatively new to pizza, having spent the past two-and-a-half years at Iron Born Pizza, where he was sous chef and manager of its Strip District location. Prior to that, McGhee worked primarily in chef-driven restaurants such as Morcilla, Scratch Food & Beverage (now Scratch & Co.) and Independent Brewing Company, as well as Andrew’s Steak and Seafood, the former steakhouse at Rivers Casino.

“I really got into the daily flow of pizza life at Iron Born. With fine dining, you have a very small window of clientele you serve. With pizza, you can still do elevated food. You can think through the ingredients you put on a pizza. You can make little tweaks here and there. You can do a lot of things,” McGhee says.

The heat generated by Woodfired’s oven can reach more than 900 degrees Fahrenheit, which means that McGhee is looking toward the fast-cooking, thin and airy dough structures of Neapolitan and neo-Neapolitan traditions, but, he says, “I’ve never stressed trying to make this pizza authentic Neapolitan. There are people who have been doing this for a long time who are doing it much better than I ever could. I appreciate and have a lot of respect for that, but it’s not what I want to do with my pizza.”

To that end, McGhee is making pies that sit somewhere between an old-school New York City coal oven pie such as John’s of Bleecker Street and a neo-Neapolitan one. The 14-inch pies are stretched relatively thin and cooked to a slightly chewy texture with a hint of crispiness, with a puffy, pleasantly charred rind. McGhee uses a shorter fermentation time — 24 hours, as compared to up to 72 for a neo-Neapolitan pie — which means a less assertive flavor in the crust and slightly higher hydration (63%), which gives the crust the flexibility of a New York pie. He says he’s still in the process of working with various types of flour to get the dough where he wants it to be.

McGhee’s topping builds are where you taste his culinary background, particularly the influences from Morcilla and Scratch. His specialty pies work as composed dishes yet aren’t overly fussy or complex to veer into the realm of novelty.

A red sauce pie with pepperoni, hot honey and Pecorino is a reasonably standard tilt (the hot honey craze began with Mike Kurtz adding honey and chili infusion, which he now sells as Mike’s Hot Honey, to a pie at Pauly Gee’s in New York in the late 2000s). McGhee’s addition of pickled jalapeño kicks — to borrow a well-trodden phrase that works as it should here — it up a notch with fruited heat and tang. A white pie with Chambersburg peaches, coppa secca, Gorgonzola, pickled jalapeño, red onion, basil and pomegranate molasses speaks to peak summer; I’m a big fan of using fruit as a balancing agent on an otherwise quite savory ingredient build on a pizza, and this one works marvelously.

Regarding that pomegranate molasses; it’s a nod to McGhee’s volunteer work with the resettled refugee support organization Hello Neighbor, for whom he mentors a family from Syria. He says that using a Middle Eastern finish such as pomegranate molasses rather than an Italian one such as balsamic vinegar here is a way for him to share their culinary conversations. “I want to do more of that. Use ingredients that are slightly different but not that far off that what you might be familiar with,” he says.

It’s exciting. I’m looking forward to seeing where McGhee takes it; as it stands, Woodfired is already on its way to being one of Pittsburgh’s top-tier pizzerias. You can sit at the bar at Lorelei, where you can enjoy a fantastic selection of wine, beer and cocktails with your pizza or order a pie for takeout. 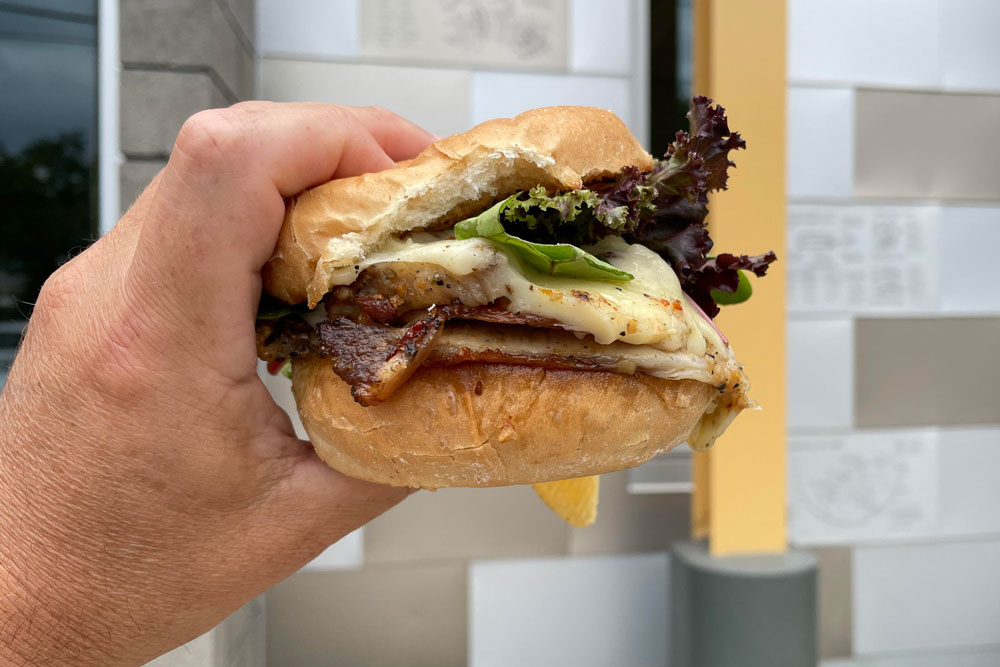 The heart of the Progression Bistro menu — which is deliberately small — is a porchetta sandwich. It begins with a recipe the Moonan has been working on since 2010. “I’ve been pretty fascinated with them since then,” he says. “But it’s not a great a la carte item on a restaurant menu. It’s better for family-style dining, but it also is pretty perfect for sandwiches.”

Moonan and Mauthe met while helping the Walnut Grill company open the regional chain’s St. Louis location. Moonan first worked for Walnut Grill at its Walnut Street location in Shadyside in 2010; that location has since closed, but the company now operates 10 outposts around Pittsburgh and St. Louis. Moonan went on to work around town at restaurants such as Hyde Park, Sonoma Grill and Pines Tavern until landing a position at Longue Vue Club, a private club in Verona. Mauthe worked in fine dining in the D.C. metro area prior to returning to Pittsburgh eight years ago and was also in the Longue Vue Club kitchen when, last May, he and Moonan launched Progression Bistro after deciding that working for someone else during the COVID-19 pandemic wasn’t working for them. Another friend, Chris Kuhn, who spent the past 20 years primarily in front-of-house positions, most recently at the now-closed Social at Bakery Square, joined them in the endeavor.

The chefs use a fennel seed, black pepper and salt seasoning rub on the pork, which they stuff with a blend of fennel, carrot, garlic and shallot puree prior to rolling; that move adds body, moisture and sweetness. It’s cooked slow and low in a combi oven in the commercial kitchen at Fulton Commons, where the trio bases its operation.

Once on the truck, the porchetta is served shaved in a soft Mancini’s Bread Co. bun, topped with Swiss cheese, peppery salad mix and aioli seasoned with fenugreek, caraway, turmeric, chili and garlic.

The other focus of the Progression Bistro is on grain and salad bowls, which Mauthe says are there to add balance to the rich porchetta sandwiches, as well as an expanded offering for customers who don’t eat meat (for those who do, chicken and salmon are available as add-ons. I found the grain bowl — a mix of bulgar, quinoa, garbanzo beans, tomatoes, onions and carrots with a house-made citronette — to be a delightful counterpoint to my crushable sandwich.

Progression Bistro typically is rolling five days a week. Moonan says they are aiming to have regularly scheduled appearances next summer. For now, the best way to find them is on social media.