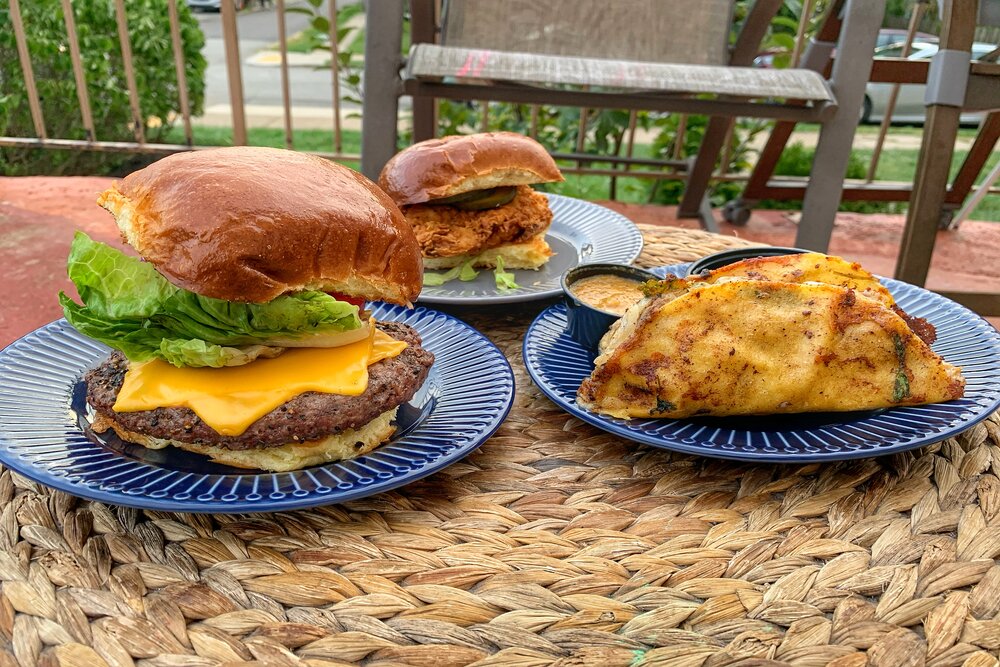 Cat Cannon and Cecil Usher are linchpins of Pittsburgh’s food and beverage industry. Over the last decade, each of them has developed cocktail programs at some of the city’s most notable bars and restaurants and served as officers in Pittsburgh’s chapter of the United States Bartenders Guild. Together, they started a consulting company, Mindful Hospitality. Now, they’re proprietors of a new neighborhood tavern, St. Clair Social.

“We wanted to open a place where you could go three nights a week,” says Usher.

The return of a neighborhood pub that serves better-than-standard comfort food is a movement on the rise, a natural pivot from the everyone-has-bespoke-cocktails and dishes that were a little too fancy for a Tuesday night trend that by the late-2010s was beginning to feel overdone and tired. That push for comfort has become even more prominent as diners slowly start to return to restaurants and food-forward bars.

“When you’re done working, you don’t always go to a fancy cocktail bar. Sometimes you want to go smash some wings and have a beer and a shot. But you want it to be really good food and really good drinks, and you want to have that at your neighborhood watering hole,” says Cannon.

“Burgers, wings, darts, pinball. Tchotchkes on the bar and walls. Those forgotten era cocktails,” says Usher. “We wanted to go back to that feel, and we wanted to deliver that at a high level.”

Cannon and Usher have delivered at a high level in Pittsburgh for years. Usher worked for the Richard DeShantz Restaurant Group, eventually rising to become the group’s beverage director; Cannon crafted cocktails at Harvard & Highland and later helped develop the bar programs at Smallman Galley and Federal Galley. The two worked together at Lorelei prior to launching Mindful Hospitality a year ago. 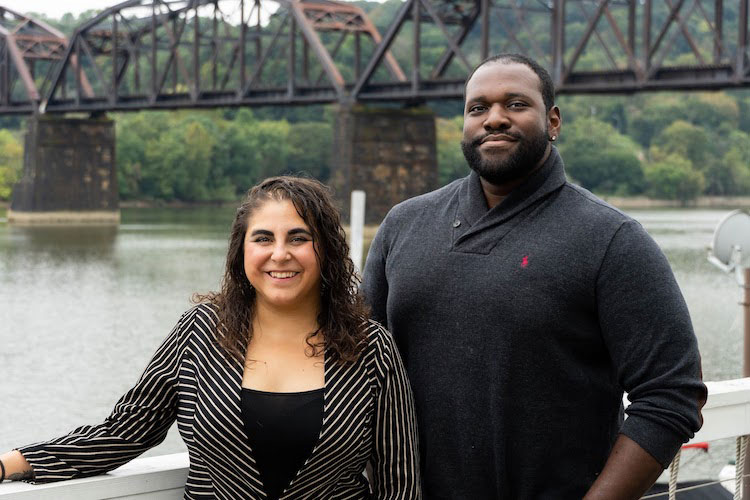 As Mindful Hospitality, the duo was running Commerce Bar in East Liberty, consulting with proprietors on building cocktail lists and hosting private events when COVID-19 changed the dynamics of their livelihoods. “For two months, we weren’t sure what we were going to do. We didn’t know if our business was a luxury. Every bar doesn’t need a consultant to open up. So what does this mean for our industry? Rather than focus on what we might not be able to do, we focused on what we could do,” says Usher.

They worked with The Warren to help provide meals for suddenly unemployed service industry workers and helped where needed to buoy the industry. In June, they struck a partnership with the owner of the former SYN Taqueria + Pizzeria space (which also housed Sharp Edge Beer Emporium for 28 years).

They hired Will Randall to run the kitchen. Another longtime DeShantz employee, Randall, most recently was chef de cuisine at Muddy Waters. For St. Clair Social, he’s built a menu of crowd-pleasers. There are wings, smoked gouda mac & cheese, mussels and short rib poutine to start, as well as a seasonal salad if you’re feeling less indulgent. Sandwiches and hamburgers make up much of the menu, which is rounded out by a few tacos.

There also are daily specials. Look for a both-sides-of-the-coin Monday that is both meatless and features 50 cent chicken wings; taco Tuesday; Southern-style dishes are served on Wednesday, Thursday is a featured mussel dish; and Fridays and Saturdays are for upscale dining, full-plate dinner specials. “We want that nostalgic neighborhood bar feel, and having weekly specials is part of that,” Cannon says.

Cannon and Usher’s drinks list is a lot of fun, with a growing menu of cocktails drawn from the 1950s swinger era through the party-time 1990s. “We’ve worked in the industry in such a deep way that even when we try to be casual about it, it’s going to be nicer than you’d expect from a neighborhood place,” says Usher, noting, for example, a high-end Long Island Iced Tea is in the works.

Still, they’re not stepping outside the box with their cocktails. Their espresso martini might be made with cold-brew coffee and Maggie’s Farm coffee liqueur — and pulled from a nitro tap for a creamy mouthfeel — but, as Cannon says, “It’s still a standard espresso martini. It’s still served in a martini glass. We’re not reinventing the wheel. We just did something a little cool with it.” 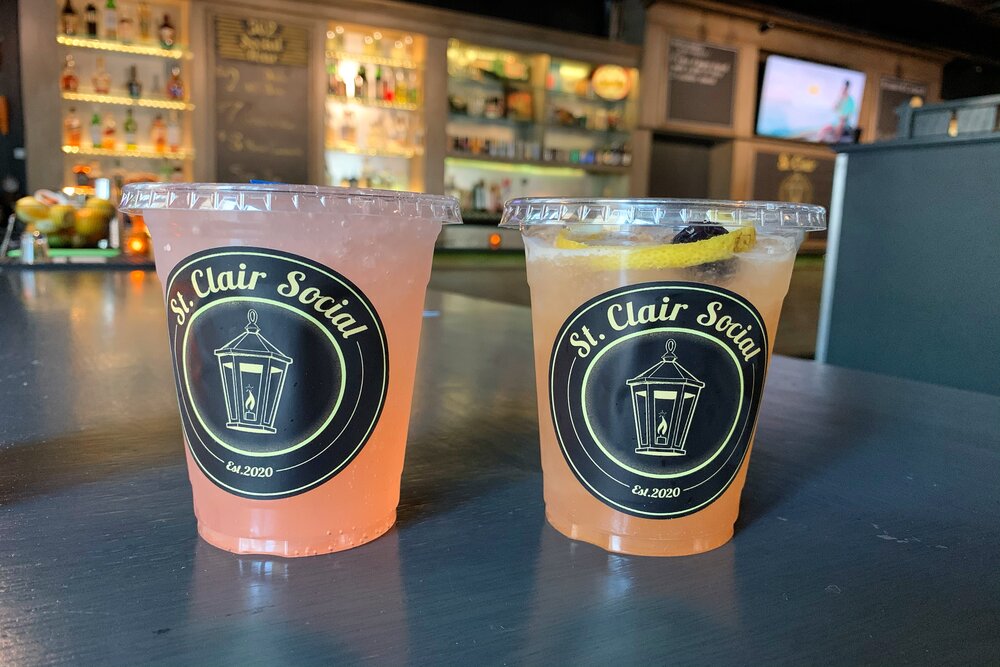 Considering the quality of the ingredients, those cocktails are reasonably priced, too, ranging from $8 to $10. There’s a small, inexpensive and tasty wine list, a Pittsburgh-heavy tap list and a few cans and bottles, too. All in all, it’s the kind of beverage program you’d be thrilled to find at a neighborhood bar.

Indeed, what I found on an initial visit this week is an establishment that delivers on its promise.

The refreshed dining room felt breezy and comfortable, and the small groups of people gathered at appropriately distanced tables all seemed to be having a lovely time. My takeout held nicely on the 5-minute drive to a friend’s house. The crispy chicken sandwich was indeed crispy, and it had a nice tang from a buttermilk brine. I dug dipping the crisp edges of ‘Bar’ ria tacos — a play on birria tacos — griddled corn tortillas stuffed with slow-braised pork shoulder, chihuahua cheese, onions and cilantro into the accompanying braised liquid. And the Social Burger was a very good tavern-style burger, with noticeable grill flavor.

It’s no surprise that Usher and Cannon’s cocktails were spot-on. The Paloma was refreshing and enhanced with soft baking-spice notes of cinnamon and star anise. And don’t miss out on the Saturn, a tiki cocktail that is not nearly as celebrated as it should; the gin-based cocktail with passionfruit, lemon, orgeat and falernum is a bright, punchy treat.

Cannon and Usher plan to slowly build on what they’ve started, though precisely how that plays out will depend on the course of the COVID-19 pandemic. One thing they know will guide them along the way is their commitment to running a relaxed, welcoming space. “The food and cocktail level is still right there. But it comes in a comfortable and easy package,” Usher says.