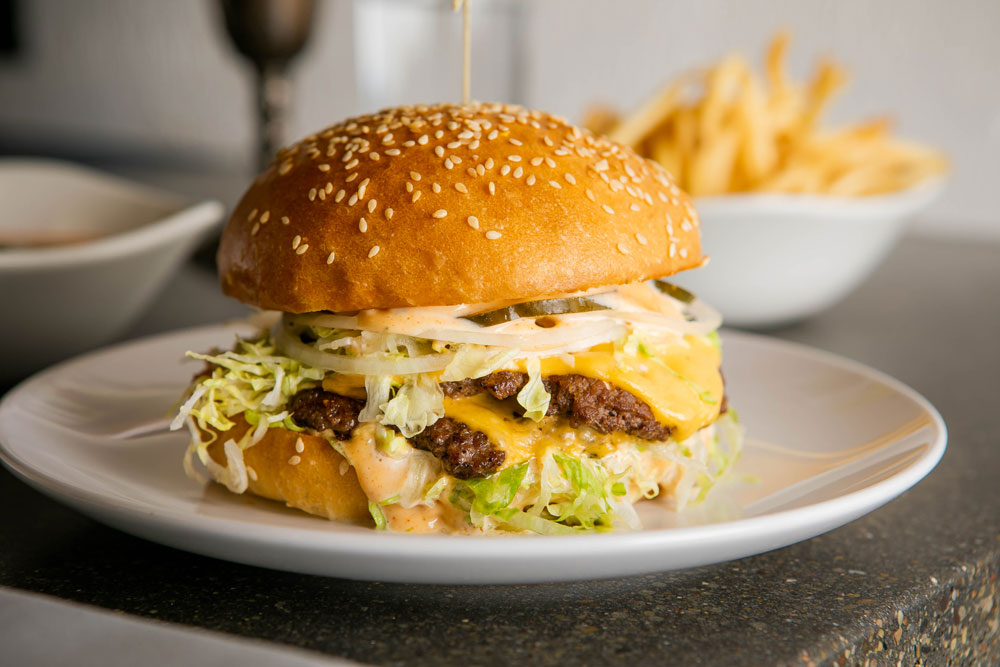 PUT THIS BURGER IN PITTSBURGH’S HAMBURGER HALL OF FAME

On a chilly December afternoon, two old pals sipped coffee at a window table in the small dining room of Oak Hill Post in Brookline, immersed in a game of euchre. A few tables over, I was enraptured by the restaurant’s breakfast sandwich, a biscuit stacked with a fried egg with a just-dippy yolk, melted American cheese, a slice of tomato, shredded lettuce and Duke’s mayo; you can add proteins such as breakfast sausage, bacon and fried chicken for a couple bucks more. I ordered mine with pork roll, which added a nice, meaty salinity.

The handheld was so well composed it changed my perspective on what makes a great breakfast sandwich. My preferred vessel is a Kaiser roll, but I planted my flag in Camp Biscuit that afternoon. Crusty on the outside, fluffy on the inside, a little sweet and a little buttery, Oak Hill Post’s offering is perhaps the best biscuit I’ve had in Pittsburgh. And it doesn’t crumble apart as you eat it, a rarity in the biscuit-sandwich world.

I’m drawn to Oak Hill Post’s sandwich menu every time I visit. The All American Burger is a textbook example of a diner-style burger; it easily earns a spot in Pittsburgh’s hamburger Hall of Fame. The two beef patties are smooshed smashburger style onto a griddle, but not to the aggressively deep laciness that dominates our early ’20s hamburger world. Instead, these are more like the juicy, thin patties you’d find at a classic roadside diner. As is the case for nearly all the dishes at Oak Hill Post, the rest of the burger is built to perfect harmony, a song of texture and flavor. It’s crunchy from shredded Iceberg lettuce, salty and creamy from melted American cheese, slightly sour and pungent from pickles and onions and saucy just to the point of saturation — but not so drippy as to require a mountain of napkins. The squishy sesame seed bun is precisely the right fit for this style of hamburger, too. 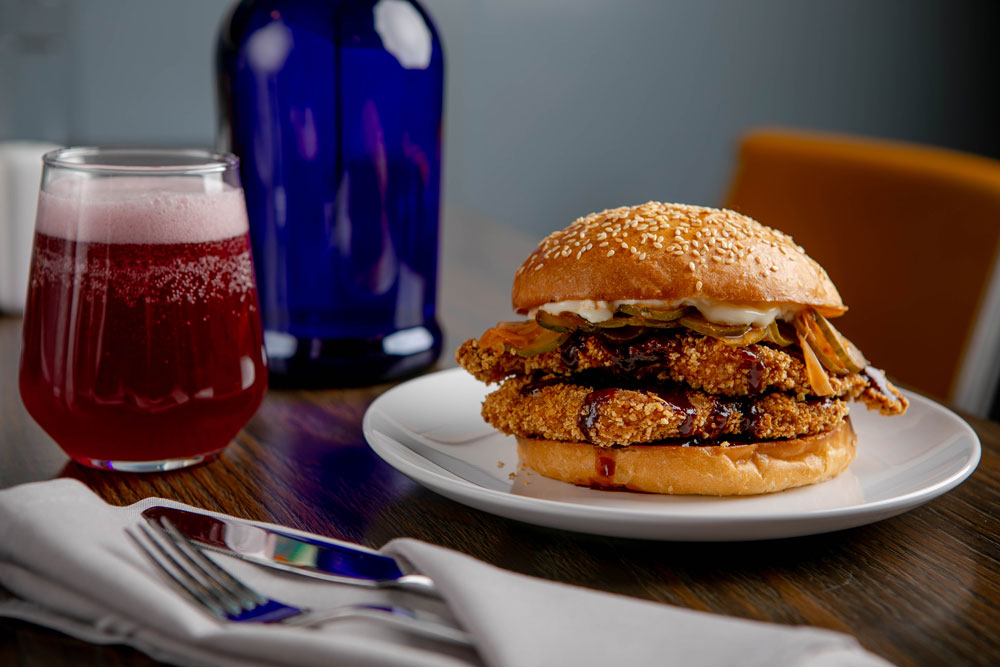 Pittsburgh still clings, by and large, to the Nashville-style hot chicken sandwich trend. Oak Hill Post doesn’t, and its signature fried chicken sandwich, No. 26, is a smart build that flies above the flock. The chicken is crispy. The sweet funk of fermented celeriac and radish in the house-made kimchi add a bit of earthy ethereality. It’s just a touch spicy from gochujang and smoothly tangy from Duke’s mayonnaise. The inside of the bun is beautifully toasted on the griddle to add depth and strength to the structure. This is a sandwich made by professional chefs who love making sandwiches.

Indeed, the only sandwich that fell a little short of my expectations was Martha My Dear, an under-seasoned chicken salad sandwich served between two slices of Texas toast far too thick for the role. There wasn’t enough celery, which could have added herbaceousness and texture, and the accompanying walnuts could have used a little more toasting.

Owners Christian Schulz and Rebecca Nicholson have melded years of hospitality industry experience ranging from luxury hotels to pub pop-ups to craft a modern diner that serves excellent food with a side of small-town vibe. Schulz is the restaurant’s head chef. He trained as a musician prior to finding his way into the restaurant industry at the now-closed Crested Duck; he later took positions at the former Block 292 and Root 174 restaurants and then Senti prior to launching a pop-up series called Menuette, which lasted for about two years, with Nicholson. She runs front-of-house and business operations and is the primary sounding board for new menu ideas. Nicholson studied hospitality at Penn State University and worked front- and back-of-house in New York City, San Francisco, San Diego and Los Angeles prior to returning to her home city to do the same in Pittsburgh restaurants. 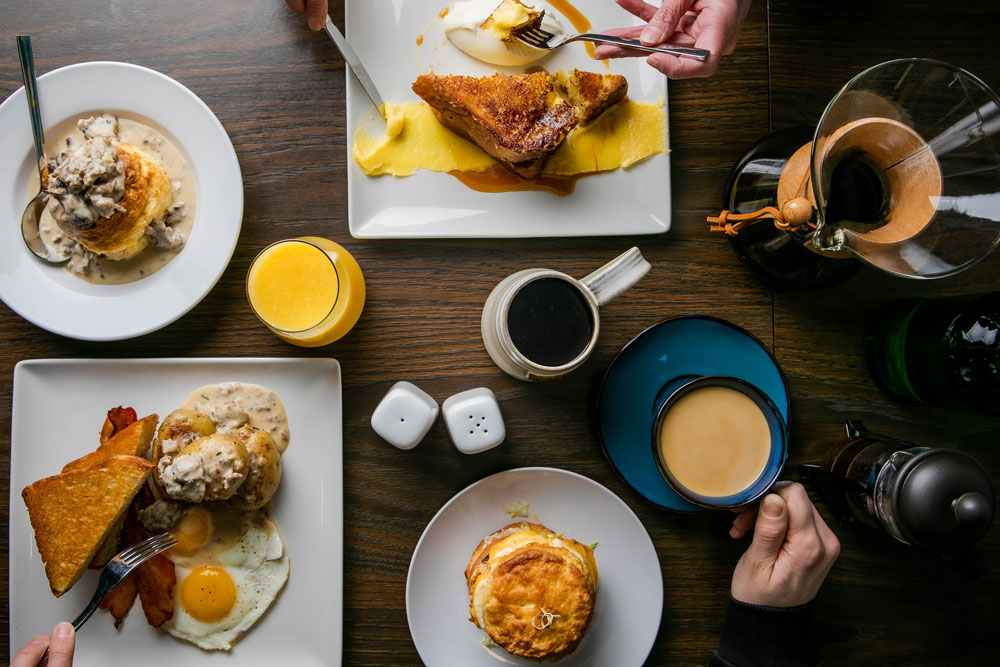 On all of my visits, staff greeted by name what felt like a parade of frequent customers. On one evening, one of them even popped in to drop off a holiday gift. I love how these old-time local diner connections, something that feels like a rarity these days, are juxtaposed by what might at first feel like a very nü-wave luncheonette. Oak Hill Post’s shelves are stacked with ceramic pour-over coffee brewers, glass jars of vivid spices and the hippest cookbooks. You can hear incantations of “behind,” “fire burger,” “two minutes to pick-up on eggs” sung in the cadence of a well-oiled finer-dining restaurant from the open kitchen, too.

It works because Schulz and Nicholson have a clear perspective of what they think a kitchen should deliver (even if, primarily due to the ever-changing world of the coronavirus pandemic, they haven’t landed on what the final result will look like) and what feels like a sincere desire to make their guests happy and serve the neighborhood. The food isn’t made for Instagram (though it is often quite prettily plated), and the service has no whiffs of pretentiousness. Rather, it’s a hospitality-forward spot that also delivers a delicious meal.

Take all that upscale coffee equipment. Nitro cold brew is designed to be smooth and naturally sweet, which is why the barista at many third-wave coffee spots will strongly suggest trying it as they made it should you ask for milk and sugar. At Oak Hill Post, it arrives at the table swirling various shades of cocoa and an offer of “can I get you some cream with this?” It doesn’t need the cream or any sugar, but nobody here is going to judge you if that’s how you want to drink it. 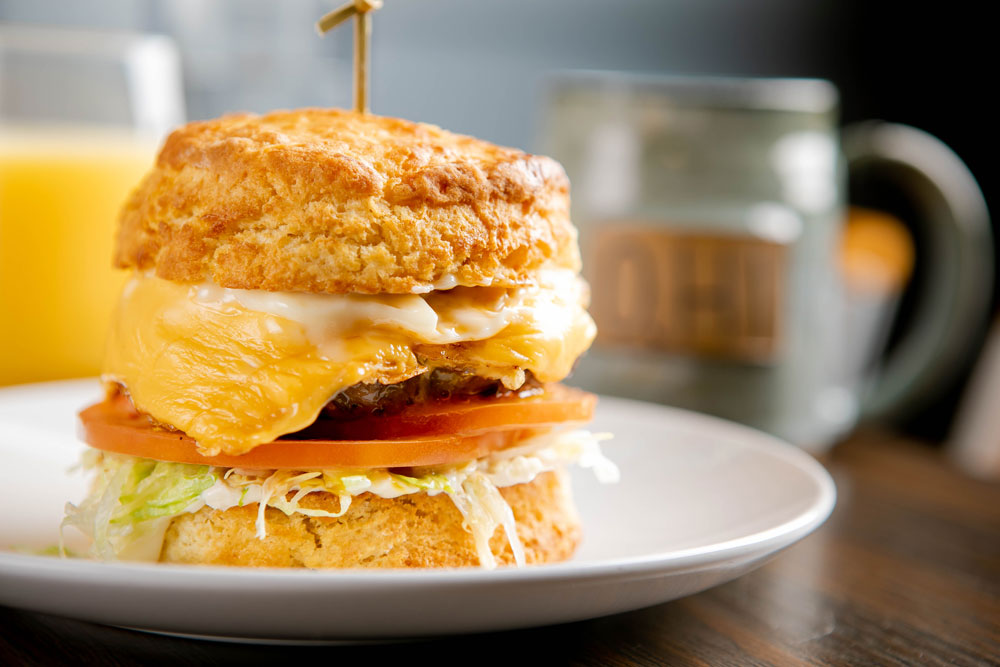 BISCUIT BREAKFAST SANDWICH? INTO IT.

The duo planned to open a more refined version of Menuette when they signed a lease for the space in March 2020. But with the onset of the pandemic and subsequent shutdowns, they moved to a more casual concept of prepared foods and offered a pay-what-you-can price structure when they opened; they rebranded as Oak Hill Post in August of that year. The following 19 months saw a mix of very successful — Oak Hill Post is already a Pittsburgh Magazine Best Restaurant — experiments in takeout, sandwiches, pasta dishes and other ideas as the establishment found its footing to align with what the neighborhood wanted.

Schulz and Nicholson eventually opened for breakfast in September because there was a demand for it, and it’s become a considerable part of their business. When I dined at Oak Hill Post in late autumn and early winter, there was limited dinner service — think blue plate specials such as pork chops with smashed potatoes and sauerkraut and chicken kimchi sausage with potato gratin and broccolini. It was quite good, particularly if you were seeking a well-prepared, complete meal that didn’t bust the budget. Because dinner hasn’t caught on in the same way that the daytime menu has, however, and out of a desire to have the entire kitchen team work together, Nicholson and Schulz have since decided to suspend evening service for the foreseeable future to focus on more popular breakfast and lunch hours. 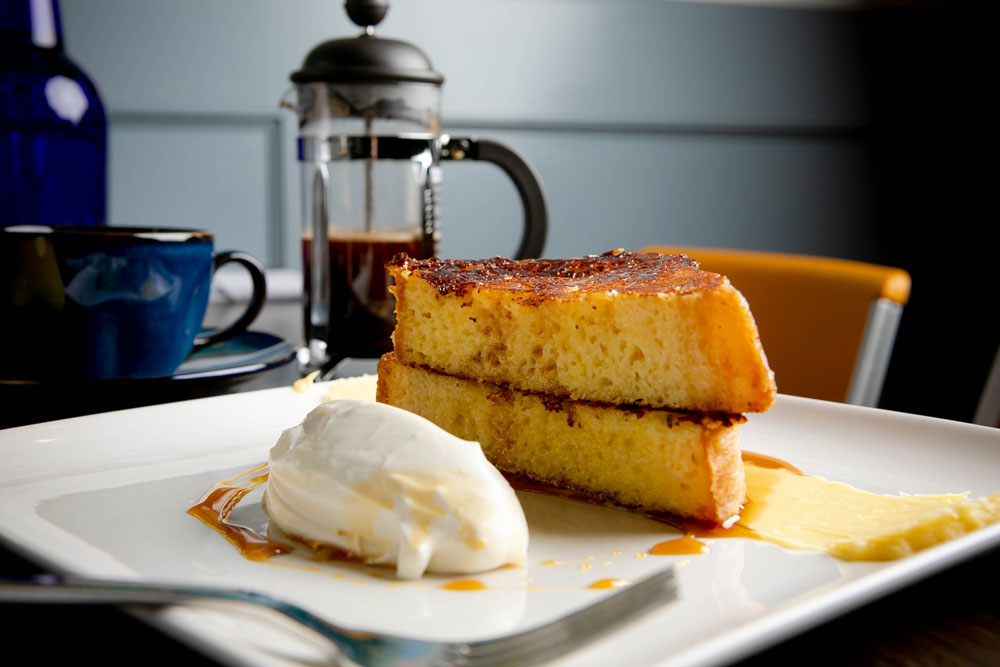 Lucky for us, breakfast, which includes that fantastic breakfast sandwich, is outstanding. If you have a morning sweet tooth, you’ll go gaga for the restaurant’s French toast with bright lemon curd, airy, slightly sweet and slightly savory ricotta mousse, and Paul Family Farms maple syrup. It’s like eating custard encased in crisp bread; every breakfast restaurant serves French toast but hardly anyone ever prepares it like it ought to be. Still, I would have preferred the lemon curd served on the side instead of streaked below (a rare moment where the presentation takes precedence over flavor) because of how intensely citrusy it is.

Although the biscuit sandwich is currently my go-to for a savory breakfast, Oak Hill Post’s breakfast burrito — scrambled eggs, french fries, sausage gravy, American cheese and sriracha in a flour tortilla — is a good spin on a hearty morning classic and worth ordering, particularly if you’re looking for a full meal on the go. Shoestring fries don’t rank high in my canon of french fries — and I would prefer standard, steak or crinkle-cut with my burger and chicken sandwich — yet they are a great choice here, adding unobtrusive but necessary texture to the burrito. As is the case with the breakfast sandwich, there are proteins available to add, but be careful because the sausage gravy, which comes standard in every burrito, can overwhelm them (in my case, it blew away the flavor of crispy fried chicken). I like the idea of a classic diner breakfast served as a burrito, but using a less assertive gravy or even a different sauce entirely would offer a less intrusive canvas. I sure am excited to have that flavorful sausage gravy with some biscuits sometime down the road, though. 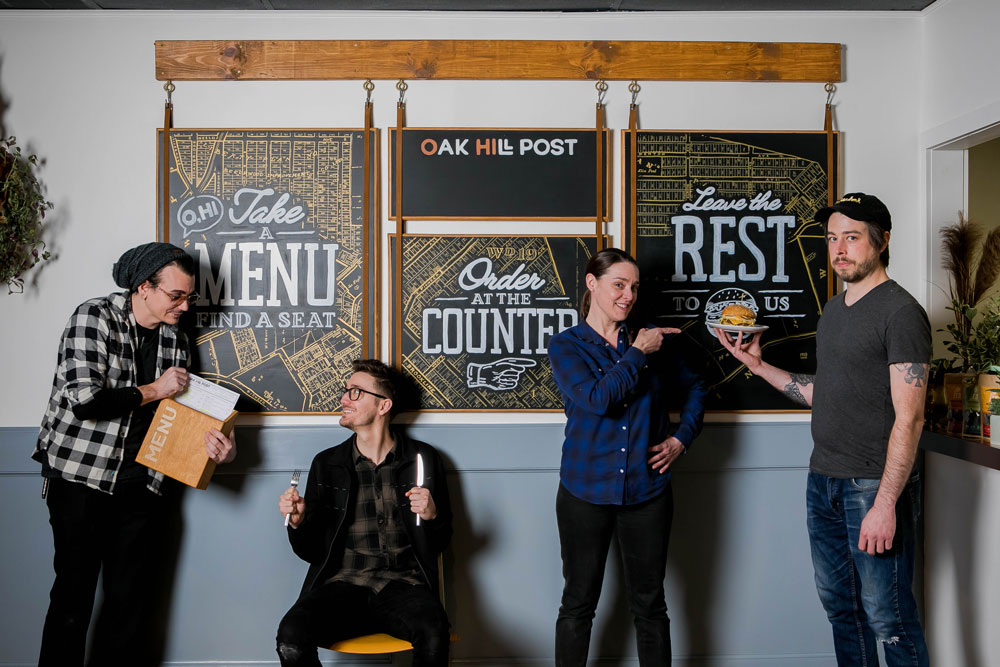 THE OAK HILL POST CREW PLAY WITH THEIR FOOD.

With the reduced hours, Schulz says he and the rest of the kitchen crew will have more time to play with and expand the menu. I’d love to see more thoughtful vegan or vegetarian options — they’re pretty scant right now, though some dishes can be augmented for vegetarian diners — as part of that mix. They certainly have the talent to add more dynamism to what’s offered without alienating people who already know what they love at Oak Hill Post. If they do that, they’ll cement the path they already are forging — running an accessible yet ambitious restaurant that’ll be a tasty South Hills fixture for years to come.