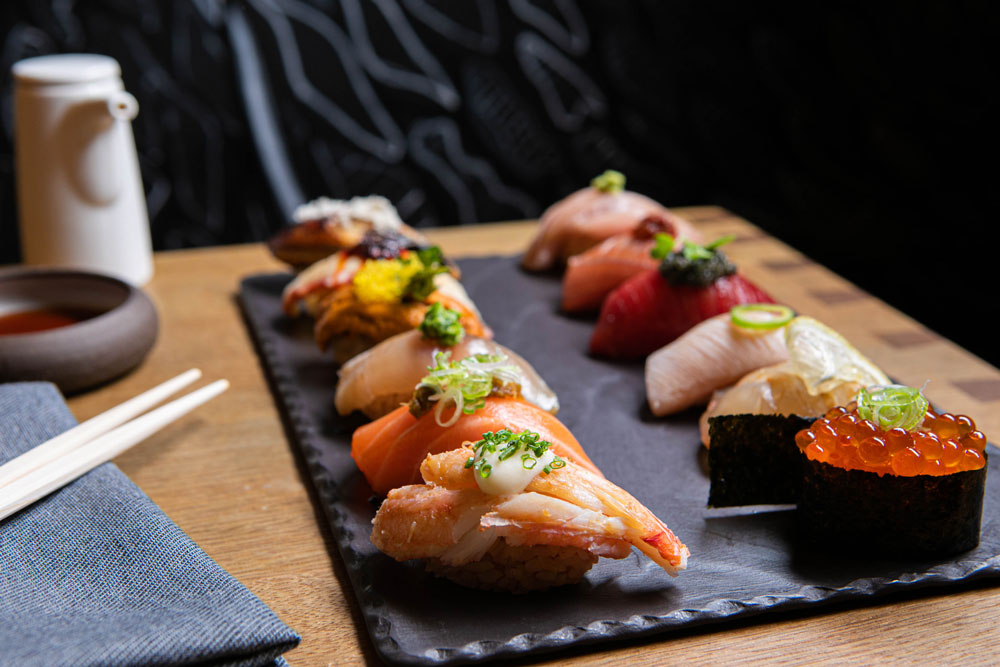 Raw wood beams straddle the dining room like the bones of a whale, while little touches throughout — such as pops of pink flowers and colorful trinkets on the back-bar bookshelves — break the minimalist atmosphere to make the space feel lived in. Likewise, the downtempo music is more soothing than the higher-octane Richard DeShantz Restaurant Group concepts such as the adjacent täkō and (temporarily closed) Butcher and the Rye.

RDRG proprietors Richard DeShantz and Tolga Sevdik are Pittsburgh’s contemporary restaurant empire builders. Over the past decade, they’ve opened a series of establishments that always feel like the right fit for the time. The duo — DeShantz is the creative and culinary visionary and Sevdik handles the nuts and bolts of operational logistics — has a rare knack for catering to broad appeal while still paying enough attention to the small details to rise above their banal mass-market counterparts.

One of the DeShantz Group’s secrets to success is hiring, developing and retaining talent, and the engaging, hospitality-forward front-of-house and bar staff are primarily longtime employees of the company. RDRG recruited Michael Taylor, formerly of Umami, to guide Gi-Jin forward as its chef de cuisine. It was a smart move. Taylor is one of Pittsburgh’s rising stars, and he’s displaying some strong technique as he continues to better his craft. At Gi-Jin, he’s bringing in quality fish and butchering them on-site with deft knife-work that highlights the right texture for each fish. 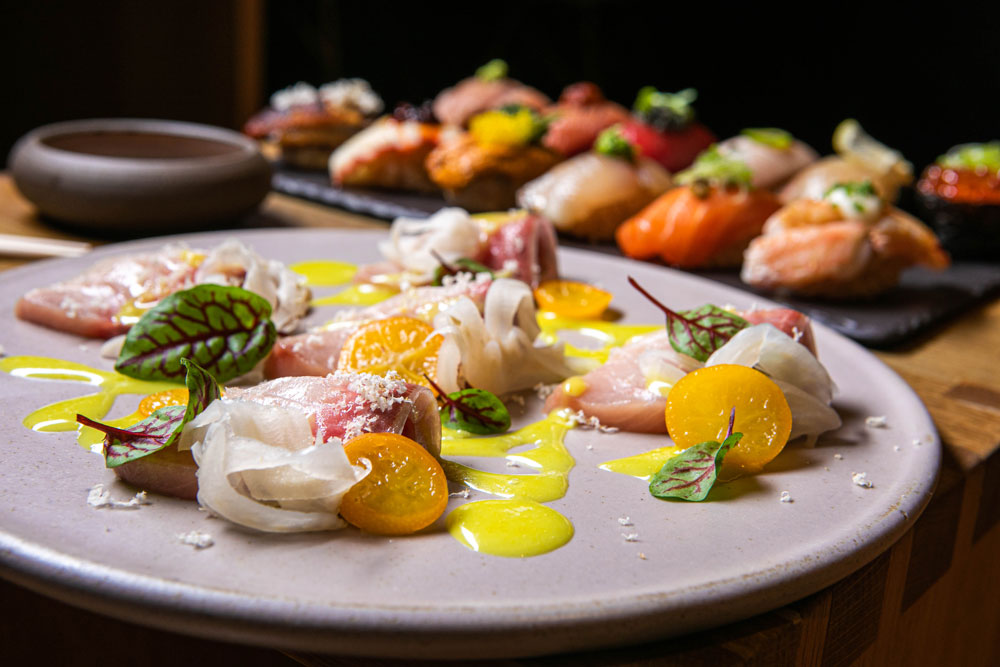 At the top of the menu is a selection of cold and hot small plates, and here is where Gi-Jin is putting out some of the most exciting dishes in town right now. Take the hamachi appetizer, which has tender slices of hamachi set on a vivid palette of winter-soft yellow, pink and orange yuzu emulsion, compressed kumquat, red-veined sorrel, pickled fennel, fresh horseradish and yuzu salt. Those garnishes highlight the mild fish with sweet, tangy and sour notes, enhance its velvety texture and finish with a crunchy zing from the salt.

Equally as delectable is beef tataki, one of the few non-fish dishes on the menu. Taylor draws on Korean influences with white kimchi, gochujang (fermented red chili paste), house-made bulgogi sauce, sesame puffed rice and a sunny side up Jidori egg dressing lightly seared wafers of steak. It’s dramatically plated and ridiculously delicious, one of those dishes you think about the next day. (Plus, it’s smart to include a menu item that appeals to people who are less inclined to eat raw fish.)

Occasionally, the composed dishes miss the mark, feeling more like a work-in-progress or a handy-yet-under-delivered way to use fish trimmings. Toro tartare with paddlefish caviar, whipped tofu, plum ponzu, pickled daikon, mayu oil and nori wasn’t bad, per se; it just had way too much going on, as all the other components washed out the toro. I’d have preferred a leaner, more assertive section of tuna here (which would have helped make the texture less gummy), and I’m not sure why whipped tofu was used as an accoutrement with such a fatty cut of fish. The accompanying plate-sized cracker was hard to shatter, and it did so unevenly; worse, it didn’t enhance the enjoyment of the dish. 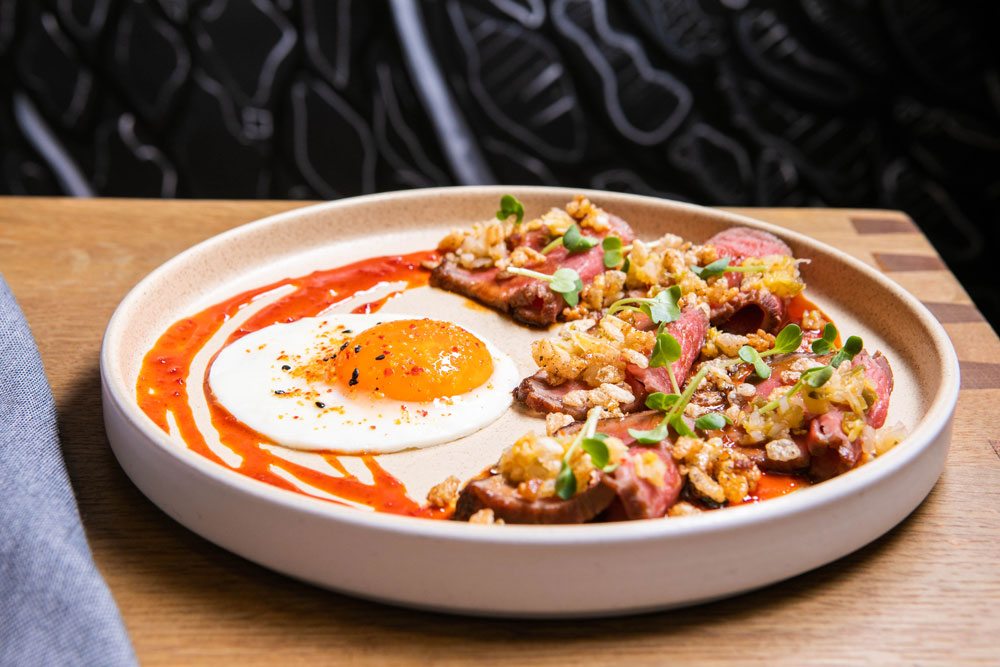 Below the starters on the menu is a selection of nigiri, the seemingly simple yet often beguiling combination of sliced raw fish and seasoned rice. It’s reason alone to visit Gi-Jin, as what they are offering is in Pittsburgh’s very limited top tier. As for what to order, there are menu standards such as tuna and salmon variations and ever-changing seasonal items, so find out what’s offered and discuss your preferences with your server. As a general rule, try to balance your meal with lighter options such as sea bream and bolder selections such as uni (which on a recent visit was beautifully rich and briny).

I appreciate how Taylor is dressing individual pieces, such as topping Spanish mackerel with wasabi chimichurri that cut through the intensity of the full-flavored fish, brightening up sweet scallops with lime zest, and garnishing hamachi with ponzu, preserved lemon and scallion. He works with a light yet specific touch, though I think he could go one punch up with wasabi on most of his pieces.

On that note, I wondered why I was given soy sauce and wasabi on my visits but was never informed that the bites come seasoned, which means that we should enjoy them as-is. It was a rare, yet repeated, service flaw for an otherwise highly informed front-of-house staff. The flow is off, too. Two luxurious bites — silky, umami-bomb A5 Miyazaki wagyu and lusty, luscious o-toro — typically are a grand finale at sushi restaurants; it throws off the thrust of the meal when these are served prior to the rest of the lighter nigiri pieces, as they were on my visits. 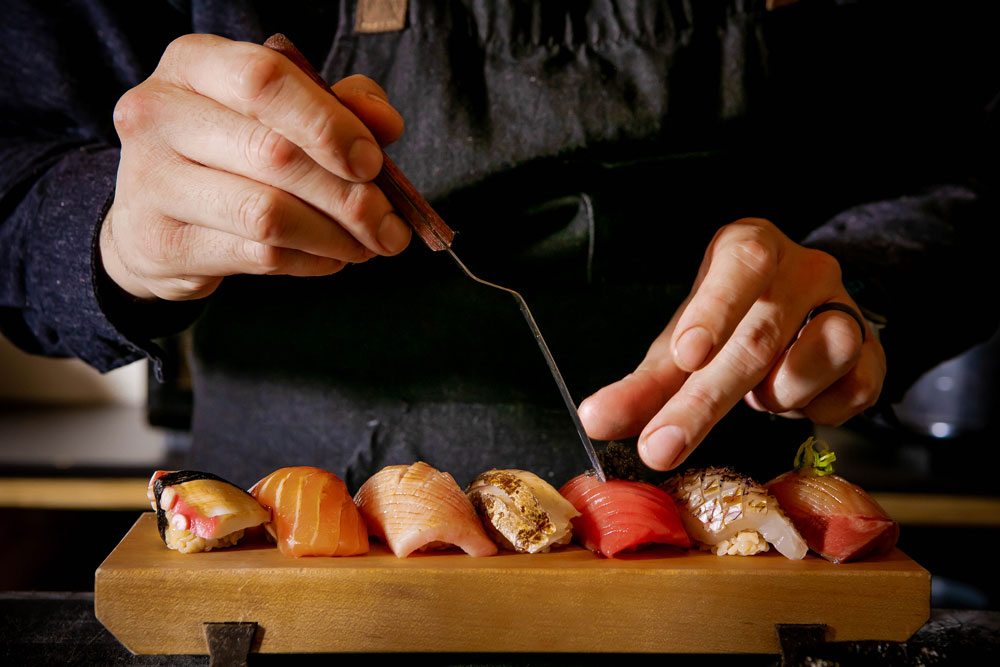 Sushi connoisseurs know that rice is as important as the fish in an outstanding bite of nigiri. At Gi-Jin, it’s cooked plump and firm as it should be and generally is appropriately seasoned with the right amount of vinegar, though on one visit, it could have been a touch drier. It was served just shy of body temperature on most occasions, but that’s more a result of sending out several bites together (rather than piece-by-piece) than inattention to detail. I’d love for an omakase option, but, as it stands, I would suggest asking your server to limit each round of nigiri to a maximum of four bites.

The section of the menu that needs the most work is the fairly lengthy selection of hand rolls, which is a bit of a disappointment considering the establishment bills itself as a “hand roll and gin bar.” A couple of them, particularly the toro and eel, are harmonious in composition. Unfortunately, the rest of the bunch are overstuffed burdens that blow out the fish with a confusion of flavors. Some, such as an oversauced miso-torched salmon roll, performed like a toothpaste tube, with fillings coming out the edges and the nori reduced to sogginess. 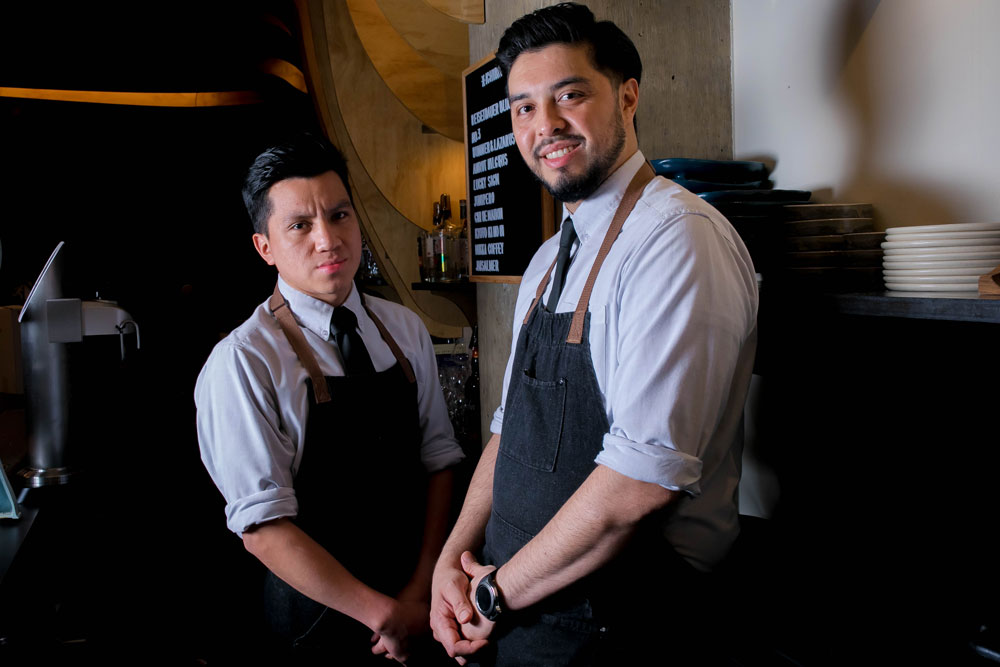 The large portion sizes of the hand rolls — and, to a lesser extent, the nigiri — meant I felt uncomfortably full before the end of the meal, which is something that ought not to happen in a well-thought-out raw fish restaurant (sure, you can order fewer items, but part of the point of the experience is to be able to enjoy a variety of selections). It also meant that I skipped ordering dessert on a February visit, which was too bad because RDRG pastry chef James D. Wroblewski II is one of the best in town. His petite menu of desserts at Gi-Jin is terrific, particularly matcha misu (tiramisu cream, matcha-honey tea and ladyfingers) — which, with notes of green-tea Twix, was hands-down better than any traditional tiramisu I’ve had in Pittsburgh.

I’m not into the idea of having Gi-Jin’s menu accessible only by QR code. There’s a lot to take in here, particularly with the lengthy beverage list, which is terrific and leans heavily into selections of sake and gin that you’re not going to find elsewhere in Pittsburgh.

Why not make better use of technology? If I’m already forced to look at my phone to determine what to order, it would be useful to have access to flavor notes to help understand the nuances of a beverage such as sake that is largely unfamiliar to Pittsburgh diners. I’d also love for RDRG to offer a digital waitlist; the 34-seat restaurant is one of the toughest tables in town to get, with reservations filling up weeks in advance, and the only way to snag a last-minute table is to follow the establishment on social media and call when you see that tables are available. 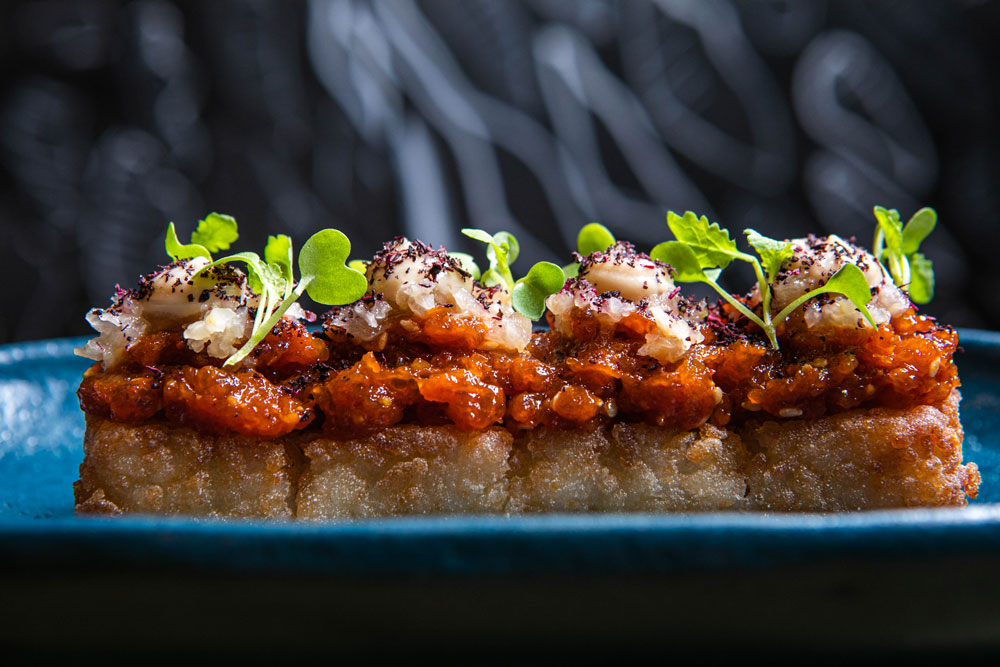 Gi-Jin might not be “Jiro Dreams of Sushi,” but that doesn’t matter because it does just what it’s supposed to do: offer a convivial and often delicious diversion from the hectic mess of the early 2020s.

From my first visit the week the restaurant opened to my most recent one last month, Gi-Jin’s trajectory has arced upward. DeShantz seems to be allowing Taylor the freedom to experiment and push forward, and he has access to quality ingredients. With a little more recipe testing on the small plates and streamlining the handrolls, Gi-Jin will be a feather in the cap of Downtown dining.

For now, choose a couple of the small plates to share with your table (one per every two people), select four to six bites of nigiri and stick with the toro and eel handrolls. Split a dessert and a bottle or two of sake, and you’re in for a wonderful night.