Following a two-year hiatus, the beloved South Side establishment returns as an even better restaurant. 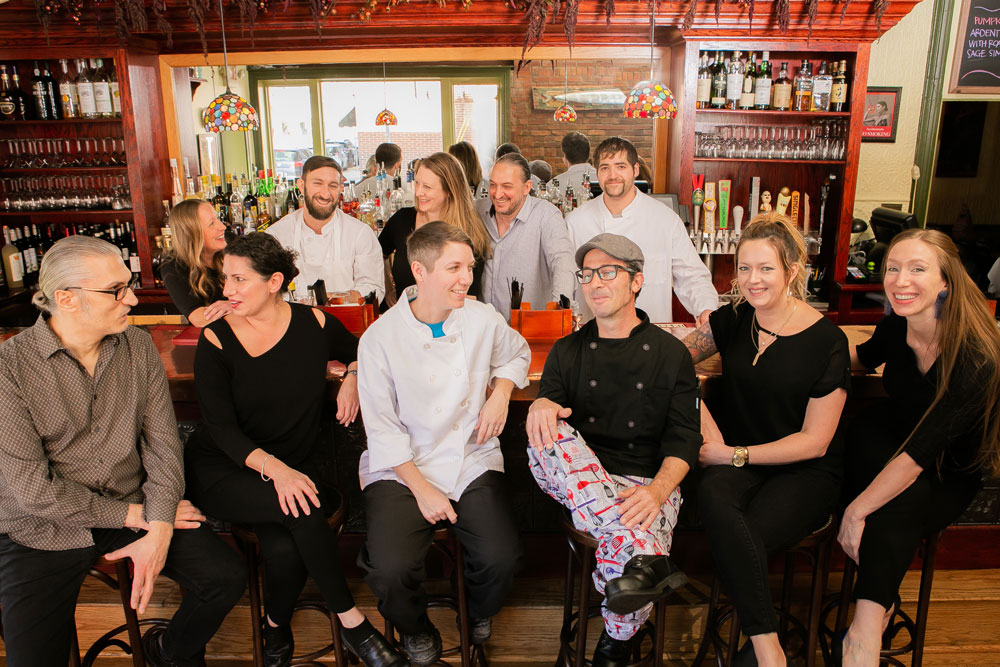 In 2017, Michele and Cindy Savoia decided to close their beloved Dish Osteria and Wine Bar. After 17 years of full-tilt, late-night hospitality, it was time, they said, for a break. In the months prior to its April shuttering, tables were packed. On the final night, tears were shed.

When the Savoias re-opened Dish two years later, it was, aside from some added soundproofing and a few new bottles of amaro, as if they’d frozen time at their South Side oasis. Yet something did change: When it closed, Dish Osteria ranked among Pittsburgh’s best restaurants. Now it is exceptional.

I felt that the first week of Dish 2.0 while I was crushing an amped-up version of rigatoni alla scamorza affumicata. It was Dish’s most popular menu item during its first run, and one of the few things in Pittsburgh I hope will never be removed from a restaurant menu. The I-can’t-stop-eating-this combination of toothsome rigatoni in a creamy sauce of smoked scamorza and Reggiano cheeses, prosciutto, peas, roasted and salted pistachio nuts is jubilation in a bowl. Numerous visits later in October, my friends and I — all longtime Dish regulars — gushed about the establishment’s evolution over a bowl of insalata di pere e pecorino, a dreamy salad of tender pears dressed in fig cotto, peppery arugula and radicchio, walnuts, pumpkin and pomegranate seeds, and pungent Sicilian pecorino, all drizzled with honey. 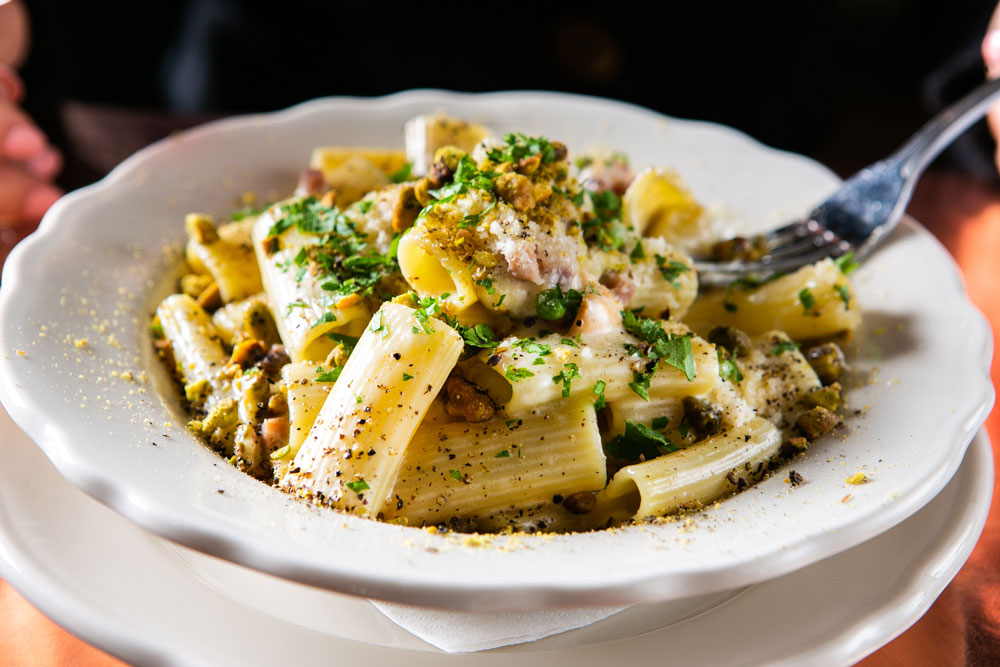 Want proof a place is special? Nearly the entire pre-closing staff left good jobs elsewhere to return to Dish. They’re a hospitality-forward bunch, and as skilled professionals do, they make your evening feel effortless. Having one of those nights where you feel like you need to be taken care of? That’s what Dish is for. Or maybe it’s a night where you want a bit of escapism? A visit to Dish works for that, too.

After all, that’s what Dish was supposed to be when the Savoias opened it in 2000, taking over a building with a ton of history and just three previous owners. In 1885, a pair of Austrian and German immigrants opened Fisher Saloon. In 1928, the building was sold and became Wilson’s. From 1946 until 1999, it was operated as the famous Irish pub McCann’s. The Savoias planned on carrying on that tradition of operating a neighborhood bar. In many ways, they have. Dish is warmth and joy, exactly what a neighborhood place should be — at its core, the Savoias run a classy joint with really lovely things to eat, a place where you could have a full meal or just pop in for a snack before or after ywhatever else you’re doing that night. Color me happy when I saddle up to the signature copper bar, order a well-made classic or classic-spin cocktail, or a glass from the curated wine list, and sit down with a plate of grilled sardines or pan-fried anchovies, fresh as can be and anointed with lemon, parsley and olive oil. It’s straightforward and perfect, and I wish we had more places like it around town.

It’s icing on the cake, then, that it also is an ethereal place for dinner. 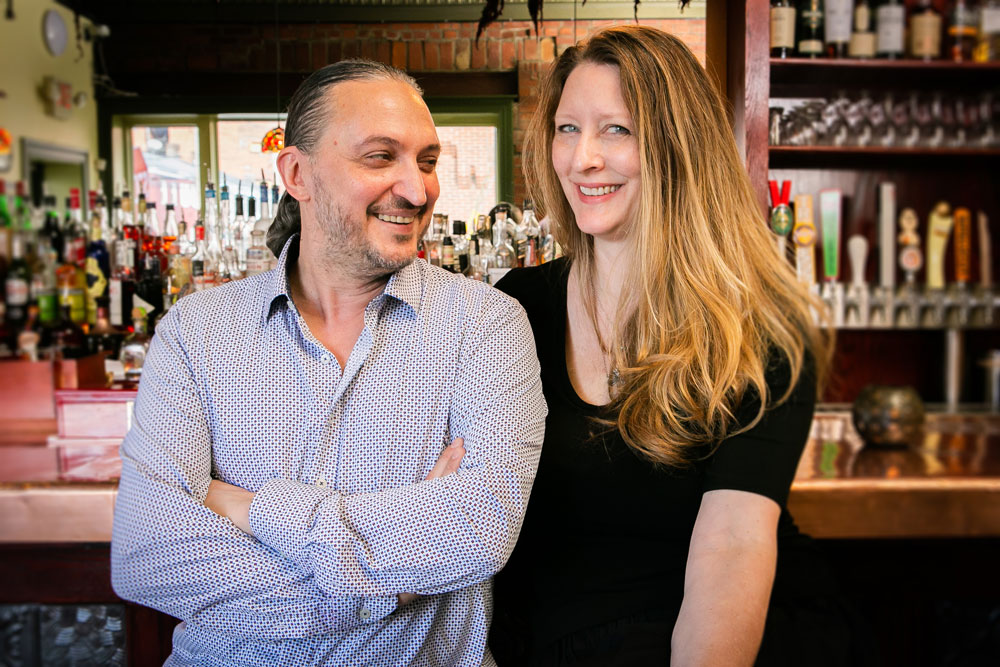 Michele Savoia runs the kitchen and he’s cooking with a bounce in his step; the two-year sabbatical has him rested and refocused. He’s paying attention to the little details, and that extends to the garnishes at the edge of the plate. Take a dish such as capesante al polline di finocchio, pan-roasted sea scallops dusted with wild Tuscan fennel pollen. Sure, the sweet scallops were appropriately seared on the outside and tender within, but that’s as they should be. Savoia turned an often humdrum menu item into an exciting dish with a soft dusting of fennel pollen, an ingredient more celebrated by gardeners and foragers than it is by chefs, and by planting the bivalves on a bed of salty, crunchy sea asparagus rather than a basic garnish. He’s stepped up the quality of ingredients, too, partnering with producers such as Churchview Farm to have specific peppers, tomatoes and other ingredients grown for him. On top of that, he’s consistently serving some of the finest seafood in town. 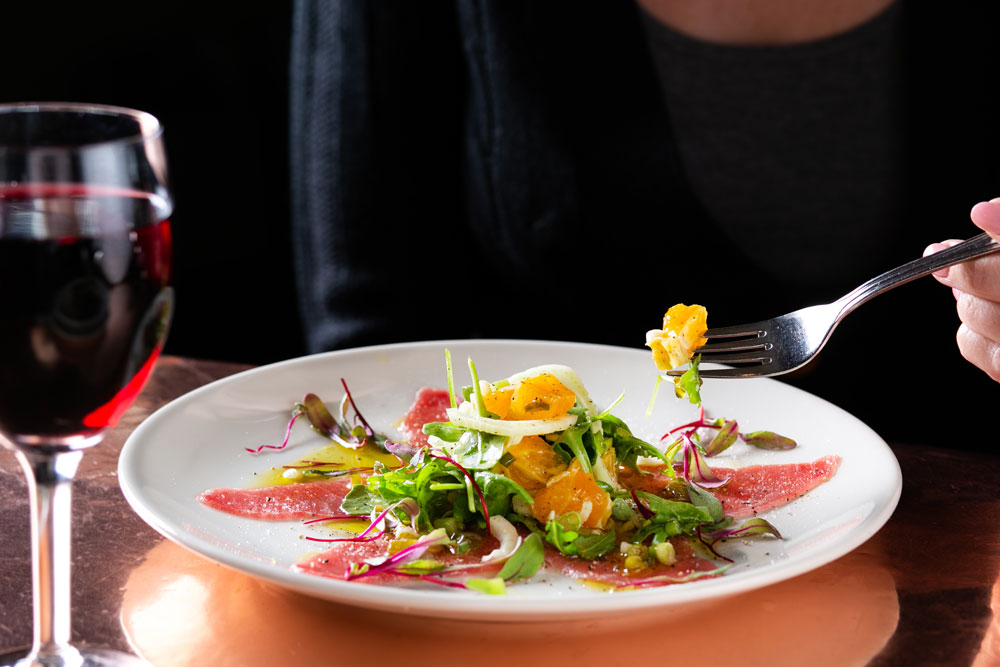 Savoia’s menu is primarily southern Italian and is driven by a philosophy that the best thing to do is let great ingredients shine. He’s marrying the right balance of technique and component construction to nudge them to full deliciousness. It sure is satisfying to find yourself fist-pounding a table in joy at tuna carpaccio, an often-disappointing dish that leaves you wondering why people put it on menus. Here, it’s exquisite — fatty, sweet Pacific tuna belly elevated by a kiss of tangerine and lemon dressing, arugula and fennel. Commonplace gnocchi with brown butter and sage evokes similar feelings, whether on its own or as a side to a lovely roasted veal scaloppine; either way, you’re getting a crisp-leaning-into-a-pillow bite.

I love Savoia’s focus on textures, particularly the use of house-made pasta as an accent in soups. (You should always order soup.) At the peak of the summer season, zuppa di pomodori e zucchine — heirloom tomatoes and zucchini — shined in a vegetarian broth with strips of maltagliati pasta, Sicilian pecorino pepato and basil. It was the perfect vibe for the time of the year when the day is hot and the night is brisk, something that eats substantially but isn’t bulky like a winter soup. Then there is zuppa di vongole, clam cockles soup, which ranks high among the regular rotation of Dish dishes I crave the most deeply. It’s sweet and smoky from the tomatoes, briny and oceanic from the tender cockles and sexy from the saffron. Fregola, semolina pasta with a shape similar to couscous, brings the alluring bowl down to earth; it felt like fortification for the forthcoming cold winter nights. 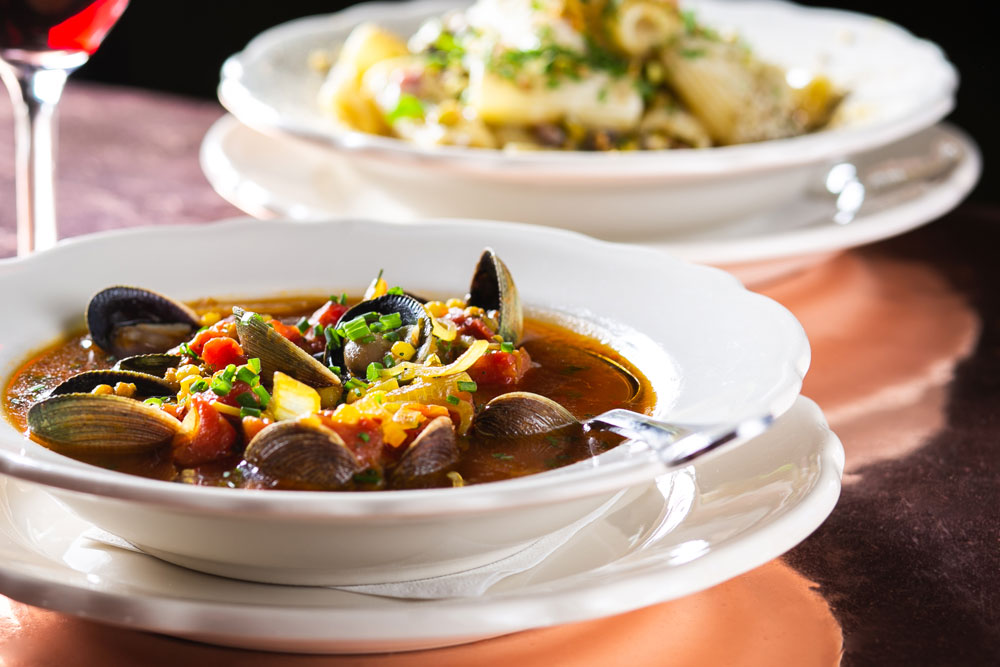 I’d typically end a restaurant review with something constructive for the restaurant. I wouldn’t change a thing about Dish (though, given its success, adding an online reservation system might make the experience a bit easier to navigate). Instead, a tip for someone who might be trying Dish for the first time: As a guest, open yourself to participating-in rather than demanding-of, because what makes Dish so special is the genuine thrill that the Savoias and the staff find sharing hospitality. The space, even with the new soundproofing, can be loud, especially in the front room. And you’ll be packed in tightly in the dining room. Hey, that’s OK. Know before you go that you’re going to have an experience where you might (or might not) end up in conversation with a bar regular who comes every Wednesday night for a glass of wine and bowl of outstanding house-made pasta, or a couple who have had a monthly standing reservation for years. It doesn’t mean you need to join the party, but the bar area often will be filled with old friends who have been regulars at Dish for more than a decade, so you’ll enjoy yourself more if you match your energy with what you’re getting. We could use a little more connection in our lives, and it’s a cherished establishment like Dish that reminds me of that. It should for you, too.