Given To Fly Chicken Sandwiches Landing at Federal Galley in April 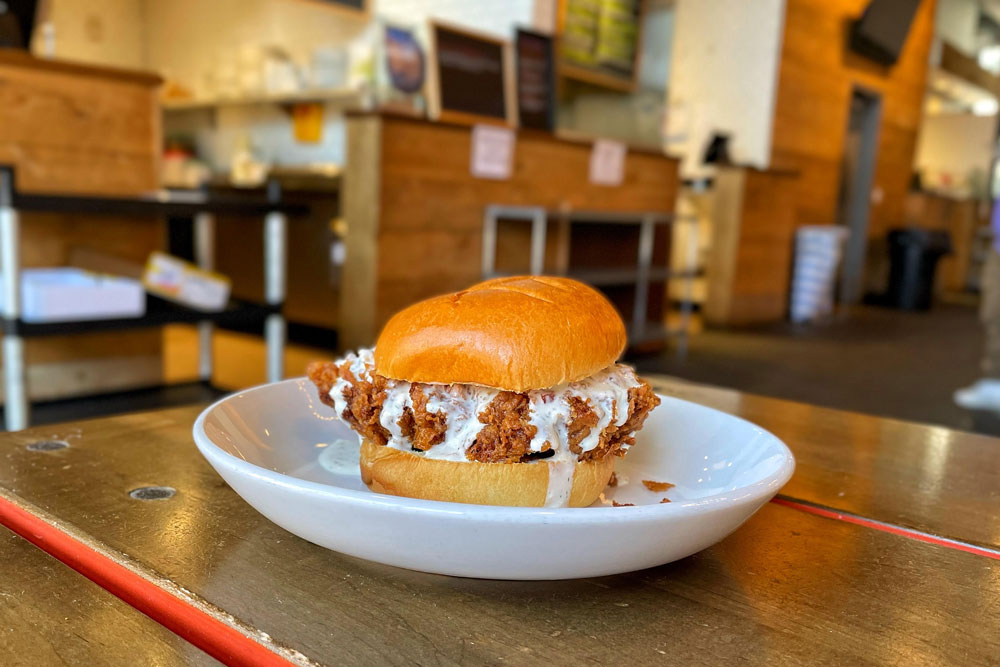 Although smashburgers have eclipsed fried chicken sandwiches as the must-have handheld on Pittsburgh restaurant menus in 2022, cravings for crispy chicken dressed and served in a bun aren’t going to ebb any time soon (or ever). If you’re looking to satisfy that hankering, get ready for Given To Fly, a fried chicken counter opening at Federal Galley on the North Shore next month.

It’s run by Troy Beck and Katie Peric, two longtime restaurant professionals who, like many others over the past two years, were ready to move on from finer-dining, chef-driven concepts.

“COVID reminded me that people don’t always want fancy, especially in this city,” says Beck, who was general manager of Garbarino’s and The Twisted Frenchman until 2020. Prior to that, he was the beverage director at Kona Country Club in Hawaii, and previously worked behind the bar at Poulet Bleu and Meat & Potatoes.

Peric comes to Pittsburgh from Morgantown, where she was back-of-house manager and pastry chef at Table 9, a New American restaurant overlooking the Monongahela River. She moved to Pittsburgh in March 2020 to take a position at Federal Galley’s Provision PGH, but the job never started because Gov. Tom Wolf’s stay-at-home order came just days later. 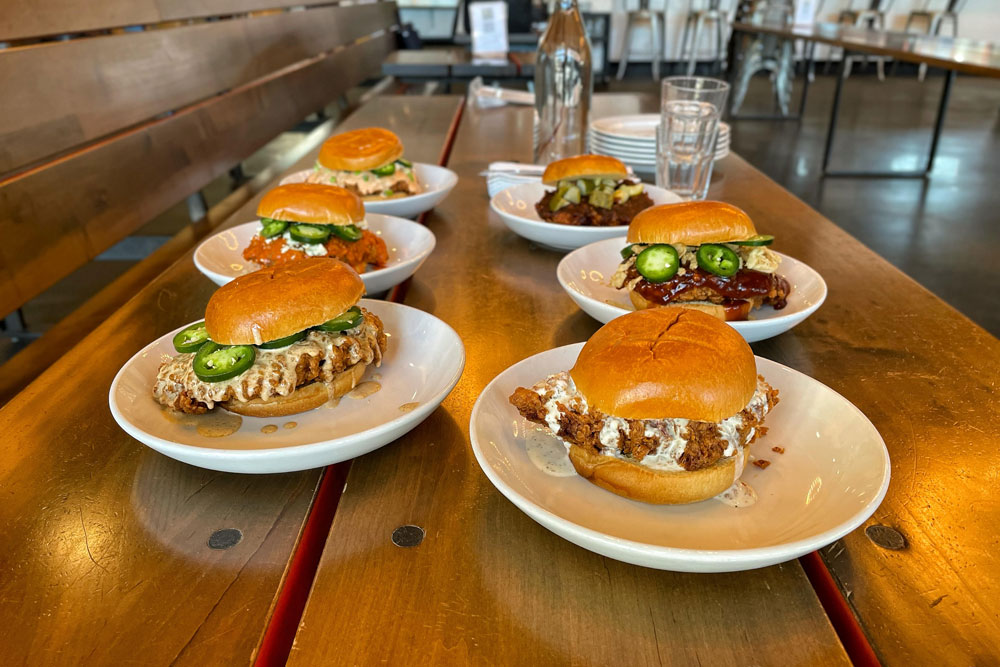 As it happens, Peric is back in the space she originally planned on working in, but this time she’ll be running the kitchen.

Peric says she draws on her southern West Virginia roots for the chicken breast sandwiches. She uses a buttermilk and hot sauce marinade and then double-breads the chicken in seasoned flour prior to frying. “It’s a basic, easy Southern fried chicken fry. I don’t want it to take too much away from the sauces and toppings,” she says.

“It’s about having a variety of flavors but not trying to overthink things too much. What would someone order at their favorite watering hole down the street? That’s the whole concept,” Beck says. “What makes them feel at home and how can we elevate those flavors just a little bit?”

To that end, the opening menu will feature items such as a Wendy’s-inspired bacon-ranch sandwich with Monterey Jack cheese that puts a slightly nuanced spin on the fast food classic. Lime-habanero dressing adds a bit of zing to a barbecue chicken sandwich topped with crispy onions. Buffalo chicken is, as Beck says, “A Buffalo chicken sandwich, that’s it.” Nobu is a Japanese-inspired mix of sesame oil, infused spicy mayo, eel sauce (sake, mirin, sugar and soy sauce), scallion and raw jalapeno; Beck says it’s designed to be all the things people love about a sushi roll but with chicken instead of raw fish. 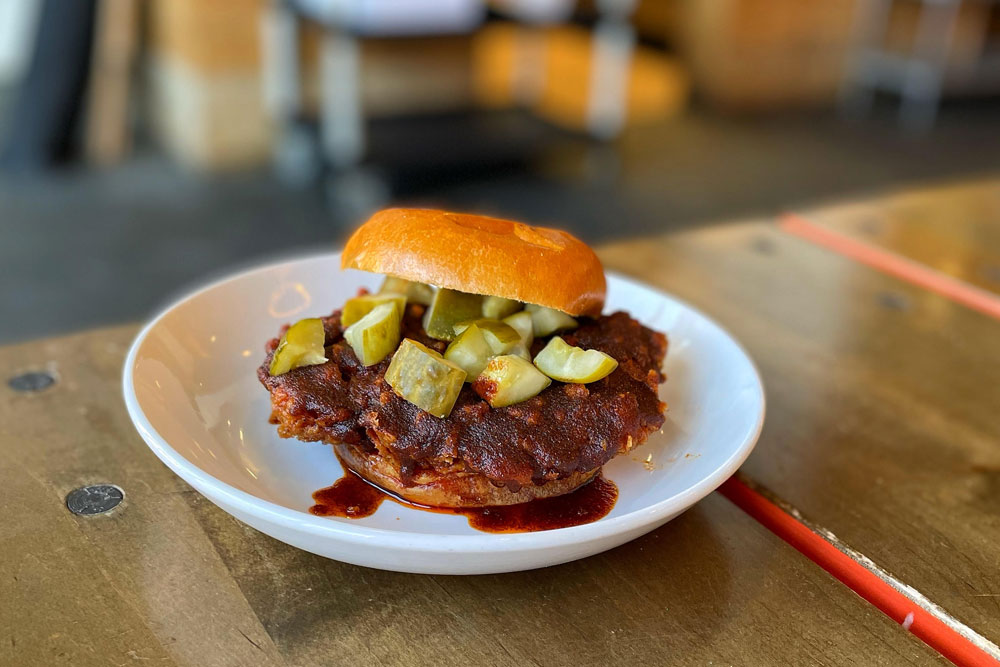 I sampled the menu last week and appreciated the layers of flavor on all of those easy-to-love sandwiches. And Given To Fly’s Nashville hot chicken sandwich, with lingering Cayenne pepper heat and sweet backnotes, may very well be my favorite version of that style of chicken sandwich in Pittsburgh right now.

The menu is rounded out by sides such as a linguine salad inspired by Beck’s grandmother’s Fourth of July picnic recipe, classic cherry pepper macaroni salad, Japanese potato salad and biscuits.

The restaurant comes to Federal Galley with a built-in fan base — Beck and Peric started a cottage business in 2020, promoting their sandwiches on Instagram and delivering the goods to homes around Pittsburgh; they also would pop up at breweries from time to time.

Given To Fly has two meanings: Beck’s great grandmother, a farmer, used to tell her large family, “All right, they’re given to fly” when meals were ready; it’s also the name of one of Beck’s favorite songs, a Pearl Jam tune from the band’s 1998 album “Yield.”

While some of the offerings from the initial rollout likely will become menu fixtures, Beck says that dishes will change seasonally and sometimes more frequently than that. “It’s all based on chicken and a bun. The only thing we have to make and store are sauces and garnishes. So we can really do whatever we want, whenever we want,” he says.

Given To Fly opens in Federal Galley on April 1. For now, you can follow the restaurant on Instagram.