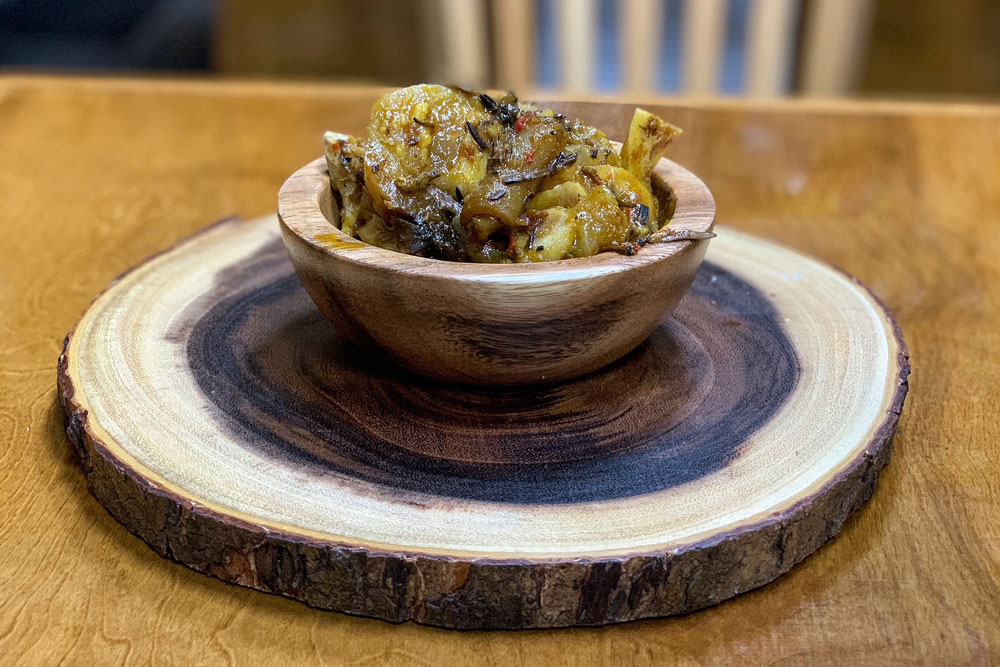 Walking into African Cuisine in Squirrel Hill, you’ll find Saudat Lawal overseeing a kitchen buzzing with the preparation of the soups, stews and starches of Nigeria, the seventh largest country by population on the planet. Layered dishes such as iyan, ofe-onugbu and suya reflect Lawal’s culinary training; she comes from a long line of chefs.

Lawal’s great-grandmother, grandmother and parents all ran restaurants in Nigeria. Lawal first shopped the open markets in Ibadan for ingredients when she was 10 and learned how to butcher meat shortly after that. “I learned in-and-out how to cook from my family. How to shop, how to prepare the meat, how to combine ingredients for the recipes,” she says. 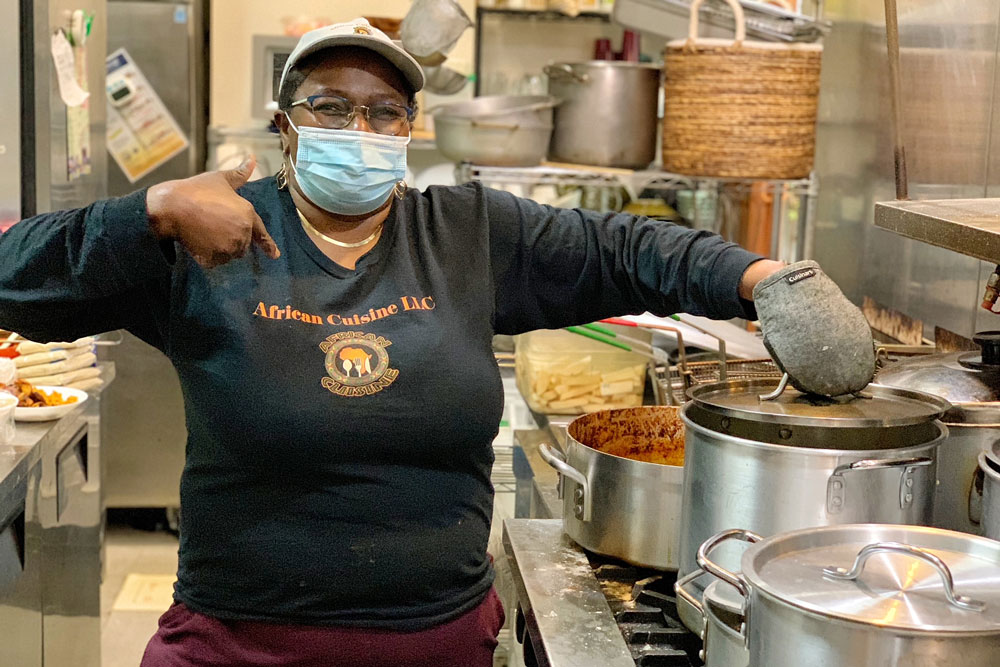 “Nigeria is a country three times the size of Italy, and it has just as many regional cuisines. The food in the north is influenced by the availability of cattle and other livestock; our coastal regions use more fresh fish than their neighbors, which highlight dried or smoked fish in their dishes.” Yewande Komolafe, the Nigerian-born, Brooklyn-based chef, writer and photographer, wrote in the New York Times in 2019. “Red palm oil suffuses dishes from the south. In a country where dozens of ethnic groups interact, we have developed a cuisine that transcends tribal boundaries, recipes that can be considered national dishes.”

It’s a cuisine splendid in complexity. A variety of hot peppers, blended in various permutations to suit specific dishes, feature heavily as ingredients. Dishes are often seasoned with stockfish (unsalted, air-dried cod), crawfish or dried shrimp (if you eat a vegetarian, vegan or Kosher diet, or are allergic to crustaceans, be sure to clarify the composition of dishes when you order). The most common meats in Nigerian cuisine are goat and beef, and dishes that use them often are a nose-to-tail recognition of the animal.

I’m here for it, and I hope you will be, too. On my first visit, a bowl of goat pepper soup, one of four pepper soups on the menu, unctuous from slow-simmered goat, was comfort on a night of lingering late-winter chill. On a second visit, I ordered fresh fish pepper soup, straw-hued and translucent aside from the hunks of fresh snapper and pebbles of peppers. Each broth rang true to itself, but both resonated with warm spices and the heat of Lawal’s pepper blend. “We don’t say a dish is spicy — we say it has pepper. Pepper is not meant to overburden your palate, but to stimulate it with an interplay of flavors, and to bring your mouth to life,” Komolafe wrote. 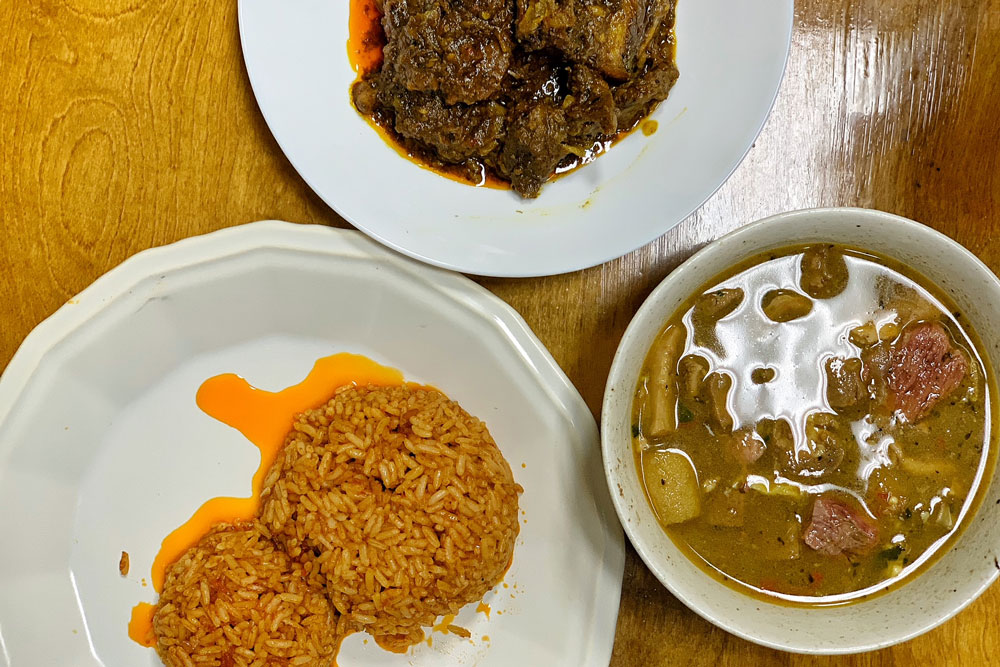 I’m happy to report Lawal and her family aren’t pulling any punches or trying to Americanize what they are offering. She and her family traveled to Maryland to pick up ingredients such as stockfish. On top of that, they made a significant investment to have peppers, spices and other hard-to-find items imported from Nigeria. “This food will give you a little bit of a kick,” Lawal says.

Lawal says the only significant adaptation she’s made for Western eaters is to offer the items a la carte so that people can get familiar with the variety of dishes. “We don’t want to make combinations where someone says I like this, but I don’t want to eat this,” she says.

Assemble a variety of dishes to build your meal. Just about everything is meant for sharing, but, of course, use discretion in doing so as we navigate together through what hopefully is the end of the long COVID tunnel.

Some items pair more harmoniously than others. Ewedu (palava sauce), for example, goes best with amala and eba. “You want to combine those because the textures go together. If you got fufu with this, you might not be as happy because it’s not as good to balance something [such as ewedu] with a slimy texture. You would want that with egusi or banga,” she says, noting that the best thing to do if you’re unsure about what goes with what is to ask for guidance; she and her staff are ready to guide new customers through their menu. 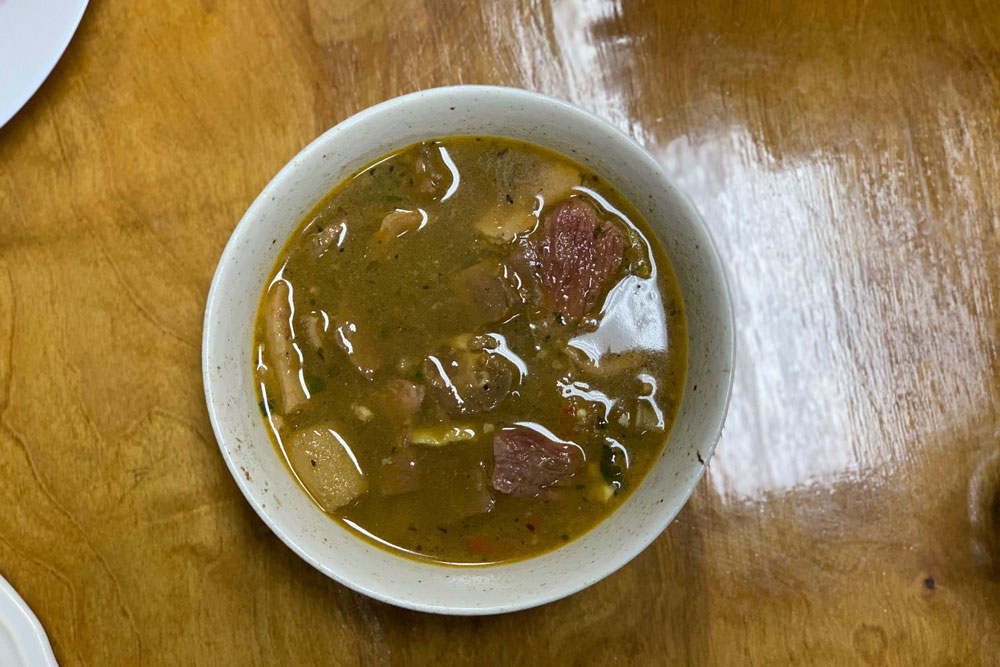 Opening African Cuisine is Lawal’s third act. Rather than join the family business when she was younger, Lawal went to school, earned a bachelor’s degree in accounting and got a job working for African Petroleum. Lawal continued to work for that company when she and her husband emigrated to the United States in 1997, settling in Providence, Rhode Island. There, she volunteered to help a friend of a friend who was hospitalized following complications following childbirth. “I loved the rapport I had with nurses and doctors. It changed my mind about what I wanted to do,” she says.

She returned to school and built a second career as a registered nurse. She and her husband purchased a house in Pittsburgh in 2010 — they’d visited friends here and were drawn in by the (at the time) affordable housing prices. In between the two cities, they returned to Nigeria for several years to immerse their children in their home country’s culture.

Now, Lawal is on the cusp of earning a doctorate in nursing with an emphasis on psychiatry. That’s right, she opened a restaurant deep into a pandemic while she’s finishing her dissertation. “I think I went to bed after 2 a.m. last night and was up again a few hours later to start cooking,” she says.

Like generations before her, Lawal has family support: her mother, husband, children, sister and extended family all work at the restaurant, too. “It must be genetic. All my children are incredible cooks. When he was a child, my son would wake up and start mixing stuff together. I’d ask what he was cooking, and he said he didn’t have a name for it yet. But it smelled so good that by the time he was done cooking, you’d feel so famished you were ready to eat the whole bowl,” she says.

“Nigeria is vast, and its dishes reflect the geographic, cultural and ethnic divides that exist within our country. When it is explored in depth, our cuisine reveals the nuances of regions and peoples, and those of diaspora and return,” Komolafe wrote in the Times.

It’s a good reminder that a texture, flavor or cut of meat that might at first seem out of the box to you is part of another person’s rich, and very long, culinary tradition. “Some textures, like gummy, might not be familiar to everyone,” Lawal says. “But the dishes are so delicious, and people will be happy when they try them.”