PM Dining Critic Hal B. Klein is catching up with two late openings and one under-the-radar gem from last year in his monthly round-up.

It’s been a relatively slow couple of months for Pittsburgh restaurant openings. One of 2021’s late additions, Moonlit Burgers, made my Best New Restaurants list, and you can read about it there. There are a few developments with old favorites, too, such as the return of indoor dining to Bar Marco, which just celebrated its 10th year in business, and restored breakfast and lunch service at DiAnoia’s Eatery. 40 North just added a takeaway lunch menu, and I’m looking forward to trying that.

So for this month’s list, I’m looking back at two openings from late last year that are starting to get rolling and one comfort food gem that has flown under the radar since last spring. 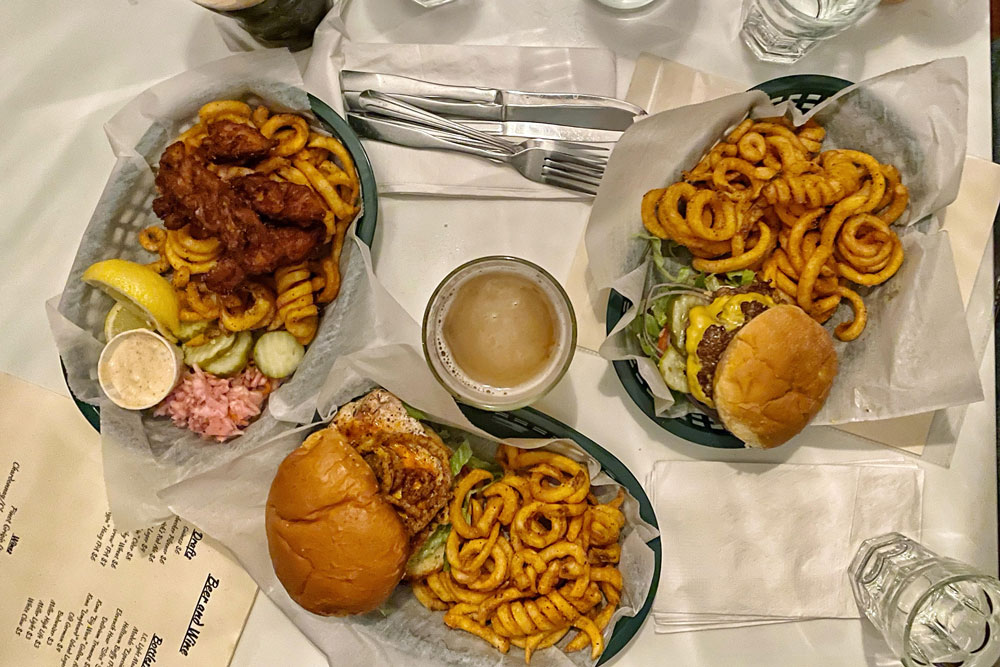 One of Pittsburgh’s most beloved neighborhood institutions roared back to life at the end of October when the Monterey Pub reopened with new ownership and management. Rick Krist and Monica Zmuda purchased the Mexican War Streets pub from Mark and Nancy Wade earlier last year; it had been closed since the onset of the coronavirus pandemic in March 2020.

“We tried not to change too much. The neighborhood truly loves the pub, and they had a lot of anxiety about if we were going to ruin their favorite watering hole,” says general manager Sophia Milinkovic.

The space feels a little spruced up and brighter but fundamentally retains the vibe that made it such an institution over the years. It’s the latest chapter for the building, which has a history as a neighborhood watering hole that dates back to before Prohibition.

Milinkovic most recently served as beverage director at Federal Galley, and the whole staff at Monterey Pub worked together behind the North Side food hall bar for the past four years. There’s a certain feeling you get when you’re visiting an establishment where the staff is dialed into the same vision for hospitality. I’ve gotten that kick-back-and-relax, we’ve-got-you-taken-care-of energy that’s matched with restaurant industry veterans’ sensibility for hospitality.

“It’s an opportunity for us as a group of service industry professionals to show what we can do. The investors are letting us do what we know how to do. They don’t micromanage. They don’t nitpick,” Milinkovic says.

D.J. Hitchman, formerly of Kaya and Pittsburgh Sandwich Society, is the Monterey Pub’s chef. He’s offering a honed-in menu of old-school favorites such as a crushable, double-stacked hamburger and shepherd’s pie. I quite enjoyed Hitchman’s juicy, crunchy fried fish component of his fish & chips plate, too. The “chips” here are curly fries, and they’re cooked nicely, but they aren’t my favorite kind of french fry (this space cries out for proper Irish-style chips). In addition to the regular menu of pub favorites, you can expect Hitchman and his team to offer specials from time to time. And a few weeks ago, they added Saturday and Sunday brunch menus with a breakfast sandwich, a diner-style bacon, eggs and potato breakfast plate and French toast, plus some sandwiches.

The bar menu is pretty straightforward, with a handful of bespoke cocktails, eight beers on tap plus cans and bottles blending local and national breweries and a decent wine selection. With a team of longtime bartenders, they’re going to be able to shake and stir any of your favorite drinks, and it’s just the right place for a pour of whiskey, too.

There’s a bonus for soccer fans, too: Monterey Pub streams Premier League games and other international matches live, even opening early on the weekends to do so.

All in all, Milinkovic sums it up pretty nicely. “It’s homey, it’s comfortable and the vibe is good,” she says. 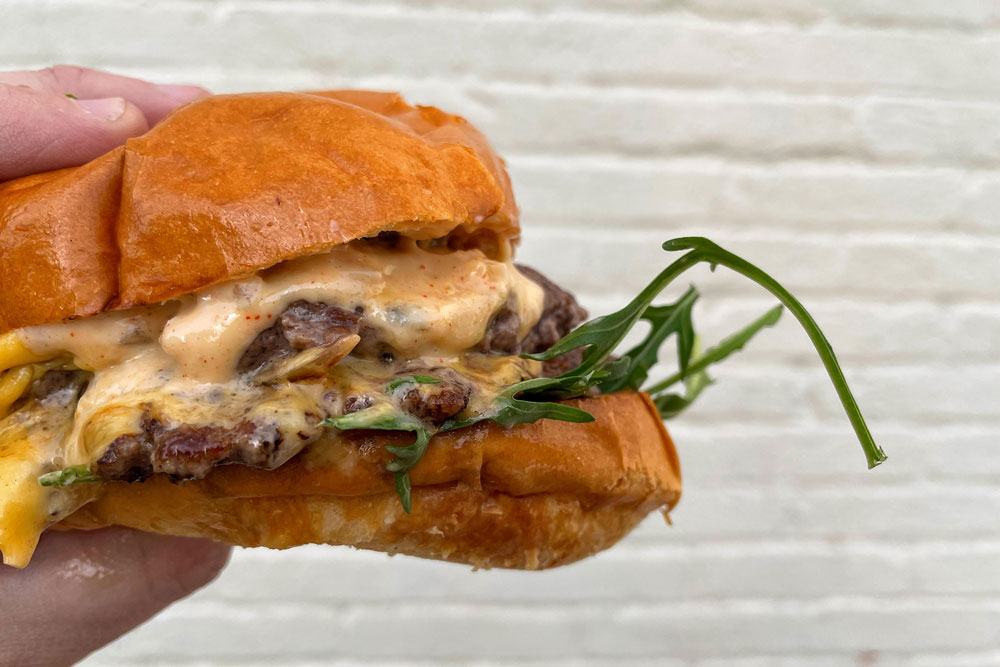 Mindy Heisler and Hart Johnson were fixtures at the beloved Piper’s Pub on the South Side for more than a decade. Heisler served as the bar’s general manager and chef and ran the kitchen at neighboring Pub Chip Shop, and Johnson was a loquacious fixture behind the bar.

Heisler had left Piper’s prior to the onset of the coronavirus pandemic to launch a catering company focused on entertainment venue green rooms, including the one at The Pavilion at Star Lake, but the business wasn’t able to move forward due to the pandemic. Johnson was furloughed when Piper’s shuttered in March 2020 (the bar is set to reopen sometime soon, though no date has been announced).

“We couldn’t just sit here and do nothing. All of our friends with families are working from home and homeschooling their kids, and most of them don’t have time to cook regular meals. Let’s solve a problem for them,” Johnson says.

They put together a food delivery email list in March 2020 and operated under the radar for the rest of that year. A year ago, the couple rented and refurbished an old pizza shop in Sharpsburg and officially opened their prepared meal business, Mindy’s Take and Bake.

The couple takes orders from 8 a.m. Sunday to 4 p.m. Tuesday of each week, with delivery and pick-up on Saturdays. Heisler prepares substantial yet easy to reheat meals such as cassoulet; sesame-crusted salmon with carrots, broccoli and rice; and jerk-rubbed pork tenderloin with cheesy corn grits and ancho-chili cauliflower. In addition, she’ll occasionally offer themed meals, such as the recent Burns Night dinner that featured haggis, too.

Heisler and Johnson run a pop-up in their space on Fridays and Saturdays, and it’s terrific. “We felt guilty about running a few hoods and not offering anything for the neighborhood to eat. There aren’t a lot of hot food options in Sharpsburg, so we decided to open a few days a week,” Johnson says.

The pop-up menu always includes fried chicken biscuit sandwiches, two kinds of smashburgers and a soup. “We know how to make really good fried chicken. We love smashburgers. We love to make biscuits. The rest is whatever we feel like making,” Johnson says.

The smashburger is excellent. And this big boy with two beefy patties with tart special sauce, vegetal arugula and butter pickles is further evidence that Pittsburgh right now is riding a sweet hamburger wave — it’s another very excellent take on the diner-style smashburger.

When I picked up food last weekend, Heisler was offering “Slightly Less Famous Bowl,” a riff on a KFC classic with fried chicken pieces, creamy mashed potatoes, sweet buttered corn, fried onion straws and pan gravy. It’s a heavy dish, perfect for a mellow winter afternoon. Juicy, salty, crispy chicken cuts through the creamy mashed potatoes, with corn adding buttery, grassy notes and the fried onions serving to boost the bowl’s texture and zing. The pan sauce is classic, after school style. It reminds me of the best childhood lunches.

Be sure to get the fried mac and cheese balls if they are offered. The little nuggets are remarkably crunchy on the outside and have a soft, cheesy interior. Dip them in the accompanying tangy tomato dipping sauce, and it’s a real treat.

Johnson says that the duo likely will expand hours in the coming months, but no firm plans are set. 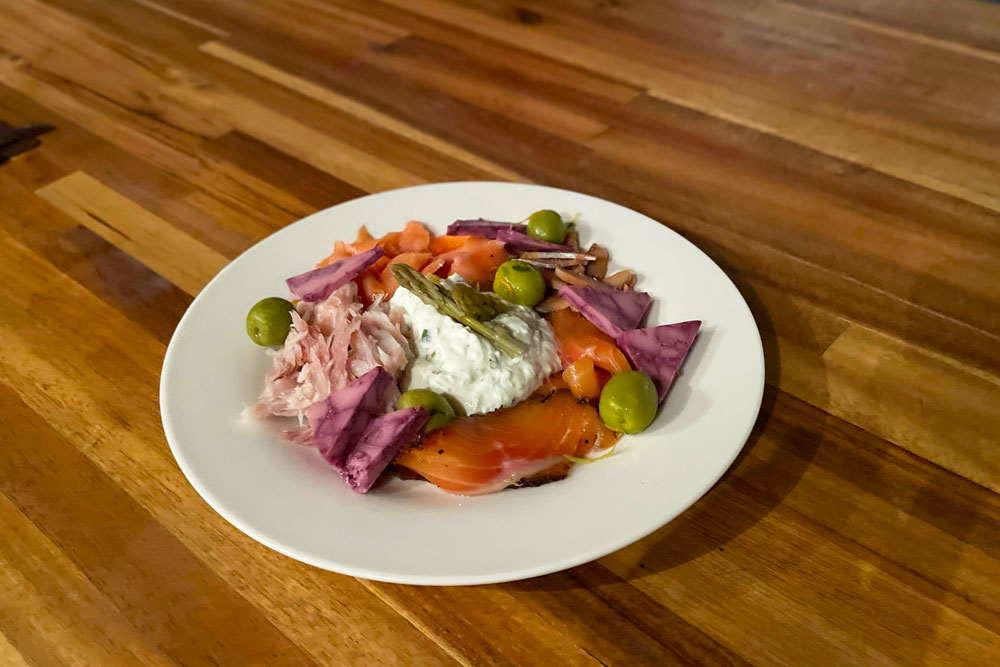 Tzveti Gintcheva is a cook who has worked behind the scenes in Pittsburgh restaurants for more than two decades. The Sofia, Bulgaria native got her start under the wing of Toni Pais at Café Zao and Café Zinho, spent several years in the kitchen of Dish Osteria, and for the past few years has worked in restaurants such as Carmella’s Plates and Pints, Vivo Kitchen and Fig & Ash.

Five years ago, however, Gintcheva purchased a building on a stretch of California Avenue in Brighton Heights that once housed the Stone Front Witch Way Inn, intending to turn the ground floor of the building into a restaurant. However, bringing the space up to code was a costly endeavor, and then the pandemic further put the kibosh on her plans. So instead, she built a space that offers something a little different for Pittsburgh — a bar with a menu of garde manger platters that might serve as a pre- or post-dinner stop (but could quite easily work as a standalone destination).

“I’m from the Balkans and I wanted to share our way of eating at a bar,” she says.

Gintcheva offers a menu of 10 platters of scratch and prepared foods, each with an international focus and all designed for sharing.

The mezze plate features the garlicky Balkan roasted red pepper spread, topped with salty sheep-milk feta; tangy Genoa salami; luxurious roasted eggplants with tomatoes; and Bulgarian Kashkaval cheese, a cow’s milk cheese that eats like a young cheddar. That plate also has a serving of house-made kimchi, a geographic departure that Gintcheva decided to include because, “Bulgarians like cabbage and I like to ferment things, so it felt like it made sense to add it to this plate.”

The Norwegian plate also ate like a meal. Gintcheva’s house-cured gravlax (cured salmon) is silky with peppery coffee undertones. She also made the snejanka, a cucumber, yogurt and garlic dip that paired beautifully with the smoked whitefish on the platter. The plate is rounded out by savory cold-smoked salmon, Porto-wine cheese and green olives, plus a few bites of blind robin, a salted and smoked herring with a fishy umami explosion I found worked brilliantly as an alarm-bell palate cleanser but might be a bit overwhelming for less fish-inclined eaters.

The Bocadillos Bar drinks program is a draw. Gintcheva operates her space with a brewery license, which means she can also ferment cider and wine. She made two of the four wines currently offered and her Viognier, which started with Australian grapes and was aged in oak for nine months prior to service, is dry and crisp; it’s one of the better house-made wines I’ve had in a Pittsburgh bar. The spirits served at the bar include Boyd & Blair vodka and BLY rum from Pennsylvania Pure Distilleries, spiced rum and falernum from Maggie’s Farm Rum Distillery and Old Tom gin from Eight Oaks Farm Distillery. Gintcheva is sourcing most of her beer from Burgh’ers Brewing; head brewer Neil Glausier lives nearby.

Rather than feeling like she’s walled in by the license, which means 100% of the alcohol she serves must be produced in Pennsylvania, she feels like it adds to the work she’s doing. “If you are part of the local economy and put your best effort to connect, that’s how we get through as a community during times like these,” she says.

I love the way Gintcheva restored the space, too. The long bar with moody lighting and small touches such as old cameras tucked into the walls, as well as the corrugated steel siding wall behind the bar that serves as a backdrop for what will be a rotating photo exhibit, contribute to a transportive feeling. There’s room for seating up to 50 people outside, and Gintcheva, who has a degree in landscape architecture, says she has long-term plans to renovate the space, which overlooks the Ohio River; in the short term, she plans to add herb and flower gardens and serve a sit-down menu this summer.

“We’re a little off the beaten path. Our neighbors seem very excited that we are open and we’re feeling humble about that, and we hope we’ll bring people in from all over Pittsburgh,” she says.