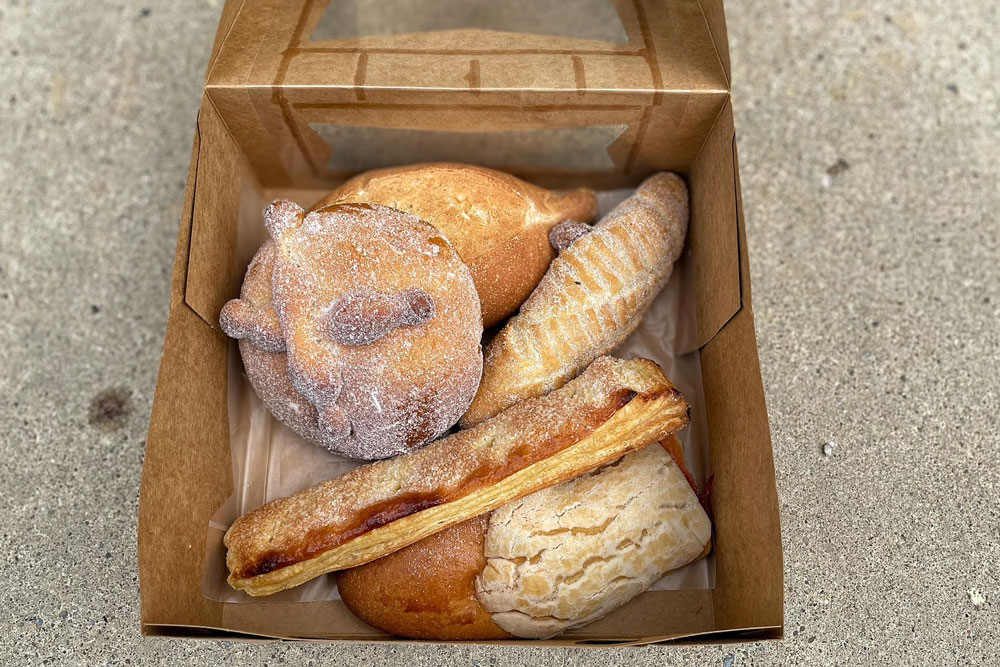 Panadería Jazmin
Every morning, except Mondays, Jose Flores and Jazmin Hernandez fill the display case at Panadería Jazmin with an eye-catching array of at least 25 varieties of pan dulce. In September, the couple opened their Mt. Lebanon bakery, likely the first panadería in the Pittsburgh area, after selling their sweet delicacies at farmers markets throughout the region for nearly three years.

“You can see all the beautiful breads, all the different flavors. It all looks so nice when it’s together,” Flores says as he restocks the case mid-day.

There are conchas, the fluffy, seashell-shaped bread that’s a signature of Mexican bakeries; crispy, ear-shaped and crisp orejas; croissant-like, sugar-dusted bigote; jelly-filled empanadas de fruta; soft, braided trenza and, for Dia de los Muertos, orange-blossom scented pan de muerto. In addition to the stacks of pan dulce, there is a smattering of savory bread such as bolillo and baguette. Even with a face covering on, I found the aromas of sugar, warm wheat, cinnamon, cocoa and anise intoxicating as I slid the glass partition open to pile my selections onto a serving tray. 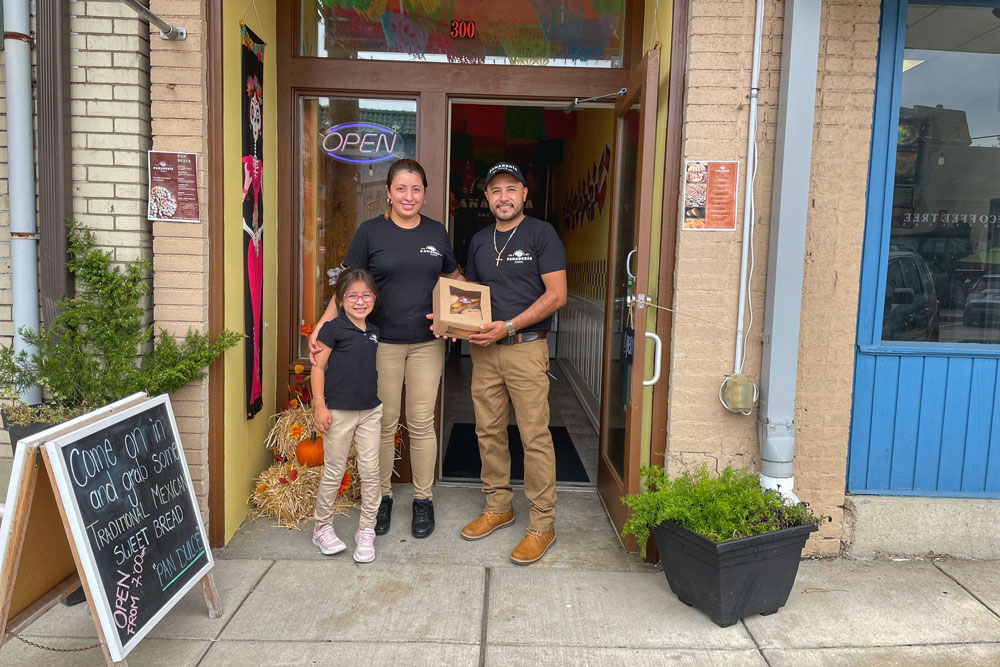 Flores and Hernandez are from just outside Toluca, Mexico, where Hernandez’s family has operated a bakery for nearly 40 years. Flores caught the itch to bake in 2017 while preparing cubiletes de queso at home (you can find the sweet-savory mini-cheesecakes at the far left of the Panadería Jazmin display). To better learn the craft of pan dulce, he worked in the family bakery and a few shops in Toluca. After that, Flores and Hernandez operated a specialty bakery in their hometown for about a year prior to immigrating to the United States. They visited a sister in North Carolina and an uncle in California, but it was a stop to see a friend in Pittsburgh that convinced them this is where they wanted to stay. “We just loved it here,” says Flores.

Everything in the display case is prepared fresh daily — the duo both bake and typically start their day at 2 a.m. There’s a master dough recipe, Flores calls it “our dough mama,” that is then flavored and shaped into various permutations of pan dulce. Some pastries, such as palmera and sweet empanadas, are prepared from laminated dough.

Flores and Hernandez have more than 60 varieties of pan dulce in their repertoire — most are from the traditional panadería cannon, though some are family recipes, and they are working on their own creations. I’ve tried nine of them so far, and I’m hungry for more.

And don’t overlook those bolillos; those rolls are among the best bread I’ve had in Pittsburgh for pressed and toasted sandwiches. 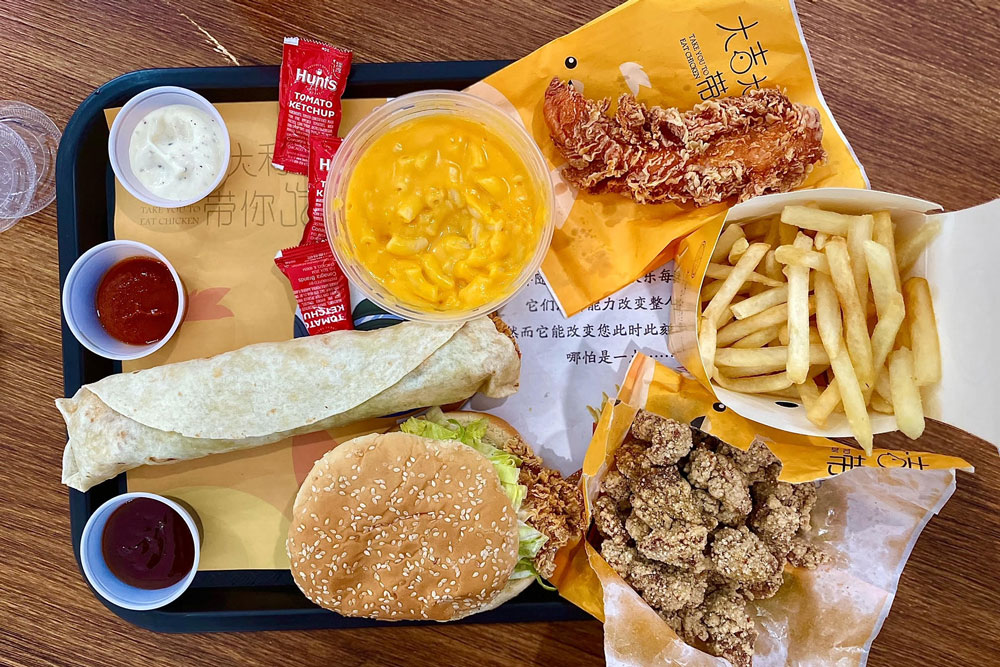 98K Hamburger
What do you get when a restaurant with “hamburger” in its name is a fried chicken joint? An affordable riff on various permutations of crispy, crunchy and craveable poultry.

The Squirrel Hill establishment’s signature dish — hot spicy crispy thigh burger — is an excellent example of why this is an exciting opening. The sandwich features a juicy and well-seasoned chicken thigh twice-breaded in wheat flour, fried to craggy perfection and dressed with shredded lettuce and a garlicky white sauce, all inside a soft sesame seed bun. It’s a pretty dreamy version of a fast-food fried chicken sandwich, particularly when adding one of the optional sauces.

98K Hamburger is the fifth storefront of a New York City-based chain and the first location outside of Brooklyn and Queens. The fact that the outpost is in Squirrel Hill reinforces the notion that the neighborhood has become one of the most exciting neighborhoods outside of New York and the San Francisco Bay Area for Chinese cuisine in the United States over the last few years. In the last year or so, the neighborhood added Yue Bai Wei, Jian’s Kitchen, Dagu Rice Noodle and Tsaocaa to an already established roster of regional and pan-Chinese restaurants (including four Pittsburgh Magazine Best Restaurants).

Franchise co-owner Selina Zheng says her aunt, co-owner Xiaoban Zheng, wanted to open a 98K in Pittsburgh after eating at one of the New York locations.

The Zhengs met with 98K owner Junhao Li, who visited Pittsburgh and agreed that the city had promise as an outpost of his small chain. They then spent time training in New York, where they developed a menu for the Pittsburgh location (every 98K has slightly different menus). 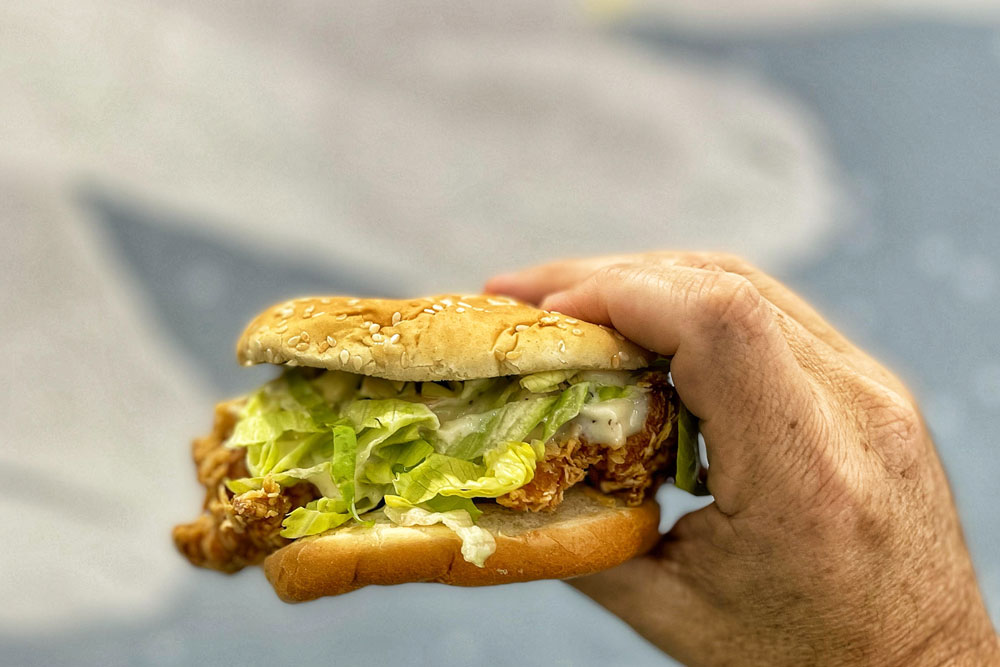 Even though the Pittsburgh restaurant has a smaller menu than the New York locations, there still is a lot to take in the first few times you go there. I suggest starting with one of the sandwiches. From there, look at bone-in pieces such as wings and legs; crispy and juicy, they’re just what you want from a piece of fried chicken. I loved the subtle seasoning on the Szechuan chicken fillet and the crust on the salt & crispy chicken, which is dusted with potato starch prior to frying, too.

The sides could use a little work. On my first visit, the french fries tasted as if they’d only gone through blanching fry and weren’t given a necessary second fry to crisp prior to serving; they were marginally better on my next visit, but, while the chicken is heads above other fast food joints in town, the fries still wouldn’t pull out of the bottom third. Another side, macaroni and cheese, was endearingly lunch-line-ish. I’d love to see a vegetable option beyond a bare-bones garden salad (vegetarians, you won’t share my excitement for 98K).

And yes … there is a hamburger on the menu. It’s a pretty good one, too. The beef patty has a denser mouthfeel than a standard-issue American fast food burger. Still, it’s quite flavorful and, dressed with lettuce, mayonnaise, American cheese and a surprisingly perfect tomato slice (no guarantee that will hold up as we move beyond tomato season), I’d take it over most fast food chains.

The nice thing is that just about everything is affordable (all the sandwiches and wraps, for example, are less than $10), so feel free to mix and match. Indeed, the best way to navigate the menu is to jump in and see what you love. There are various meal sets and mix and match options, too. All in all, it’s an exciting addition to my favorite dining neighborhood in Pittsburgh. 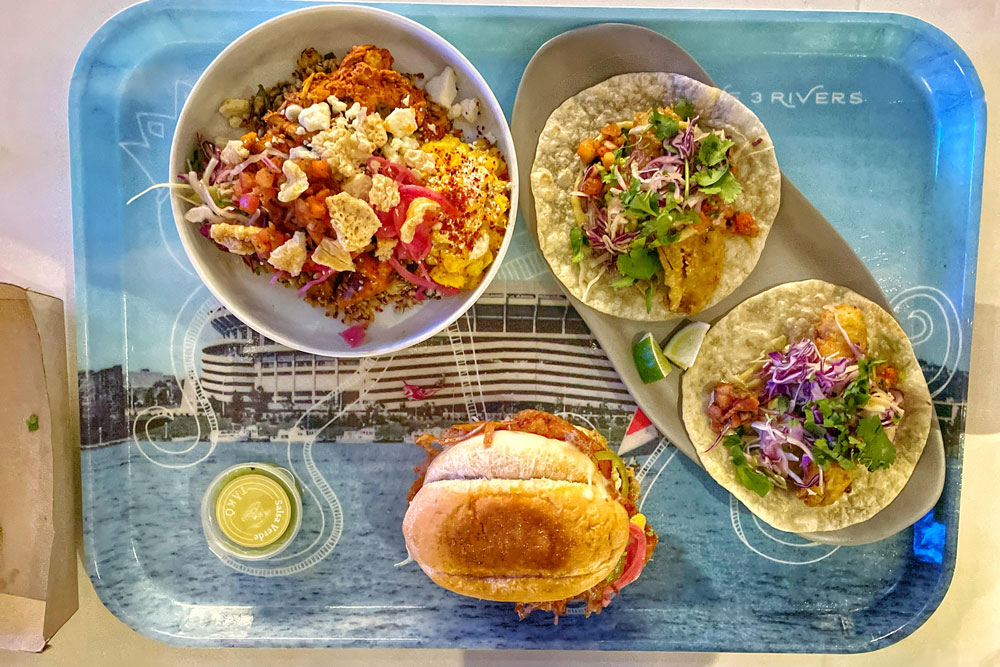 The Bakery Square space is much breezier than its moody Downtown counterpart — here, it’s more than 5,000 square feet of high-ceilinged space with a jungle of (natural and plastic) house plants, warm wood tones and bright white walls. Service is fast-casual. Make your way to the counter at the back right of the restaurant, place your order, grab a seat and you’ll get a text when it’s time to pick your food up from the assigned cubbyhole. It’s a bit impersonal, but it keeps things moving, particularly in this era of short-staffed restaurants.

The energy was high when I visited on Saturday evening.

Build-your-own bowls feels like a significant departure from the hip-cool Downtown restaurant built around Mexican-Japanese fusion tacos, but they are a clever choice for Bakery Square. You start by choosing a base of grains, greens or rice, select a primary ingredient from a list that includes carnitas, chorizo and maitake mushrooms, add dressed vegetables such as charred carrots with guajillo vinaigrette and adobo-marinated pastor cauliflower and top is all off with a selection of cheese, toppings, dressings and crunchy things. I had mine with grains (a nice mix of chickpeas, farro, quinoa and amaranth), seasoned rotisserie chicken and a heap of add-ons and found the whole bowl to be an utterly delightful feel-good meal (enough for two people, really). 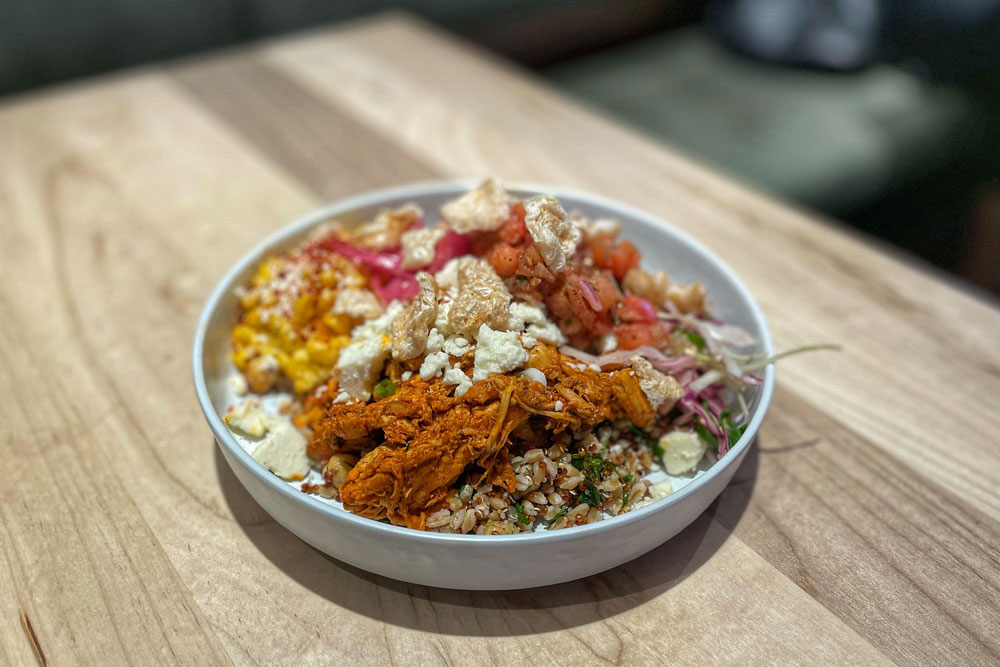 I also loved the texture and layered flavors of my torta Milanese. The sandwich featured a crispy pork cutlet, black bean hummus, sriracha aioli, red cabbage, pickled jalapeño, cilantro and pickled red onion, all in a pressed roll; I’m looking forward to trying the two other torta offerings on the menu.

As is the case at all RDRG establishments, the bar program at täkō Bakery Square is well-crafted. Indeed, with its terrific cocktail, margarita, mezcal and tequila lists, this is where you’ll find the most similarities to the Downtown täkō.

Even on a busy opening weekend night, things moved smoothly. In part, that’s because this is a systems-oriented restaurant group that, a decade in, knows how to design a steady workflow. But this also is an all-hands-on-deck-for-everything opening, with top-level chefs from all the RDRG restaurants in the kitchen and partners Tolga Sevdik and Kevin Kelley hustling front-of-house.

I hope the quality of cooking and ease of service hold up once everyone goes back to their respective restaurants. If they can pull that off, täkō Bakery Square looks to be a strong addition to Pittsburgh’s fast-casual dining options.