Two years into its brick-and-mortar location, Driftwood Oven's owners are defining what makes a good Pittsburgh pizzeria by moving beyond the Neapolitan pie. 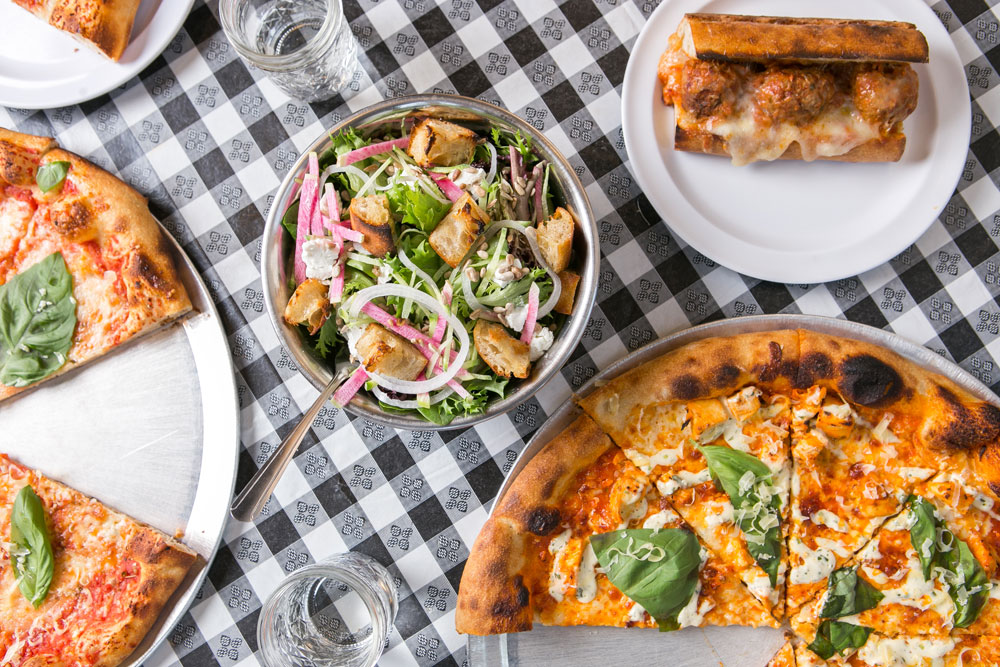 Driftwood Oven has all the trappings of a classic neighborhood pizza shop. There are pies big enough to share, a limited menu of pizza-adjacent dishes such as meatballs and salads, good beer that doesn’t cost too much, checkered tablecloths and friendly staff. But the 2-year-old establishment isn’t banking on nostalgia. Instead, it’s the model for a modern-day Pittsburgh pizzeria, where a sourdough starter and high-quality ingredients are the building blocks of a menu that will encourage you to make the spot part of your regular rotation.

Driftwood Oven owners Neil Blazin and Justin Vetter met in 2012, working front-of-house at Legume in Oakland. Blazin, a budding baker, began channeling his frustration with the state of pizza delivery in Pittsburgh by preparing pies at home using his sourdough starter as a base. In 2015, he and Vetter left Legume to launch a mobile, wood-fired operation. Over the next three years, the duo built a reputation as food vendors worth seeking out, with Blazin preparing airy, fire-kissed neo-Neapolitan pizza and Vetter overseeing increasingly long lines for those sourdough pies. 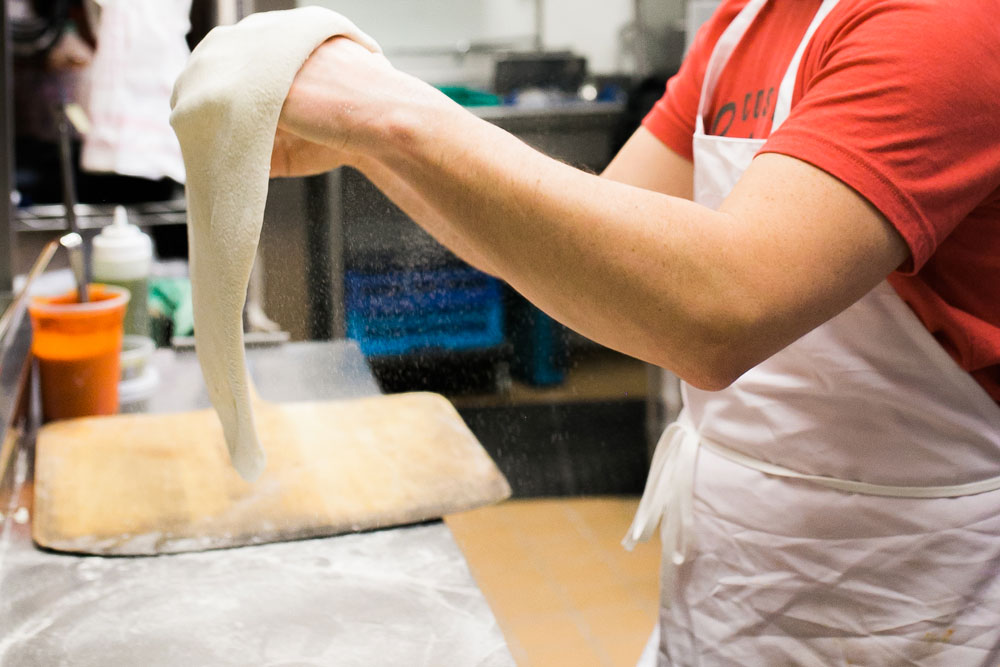 Indoors, Blazin cooks on a gas-powered deck oven. This method doesn’t provide the vulcan heat of a wood-fired one, so he’s adjusted his style, with a menu built around 16-inch, old-world style pizzas. He is one of the best bakers in Pittsburgh, and his sourdough base adds a zesty, complex flavor and more elegant texture than you would find in a typical pie. If he added a pinch of salt, his could very well be my favorite in town.

Blazin organizes his pizza menu into three categories: classic pies, house regulars and Neil’s Rotating Pies, plus a few “grandma-style” cuts. Order a classic if (like me) you’re someone who typically prefers a straightforward pie that lets quality ingredients shine through on each bite. Proof positive of a pizzaiolo’s chops is the ability to make an honest cheese pie; Blazin’s effort, complete with mozzarella hand-pulled from Caputo Brothers curds, sure fits the bill. The most elaborate of the classics is Major Tom, a white-pie holdover from the mobile days; it’s topped with finocchiona, Morita chili oil, herbed ricotta, mozzarella, fresh garlic and white-wine shallot cream sauce. It’s almost excellent, just a little too heavy on the ricotta and too light on the salt. The grandma — or omi — slices are a sleeper hit. Roman-style rectangular cuts are crunchy on the bottom and airy in structure; pair one with a glass of sparkling wine for a weekday pick-me-up. 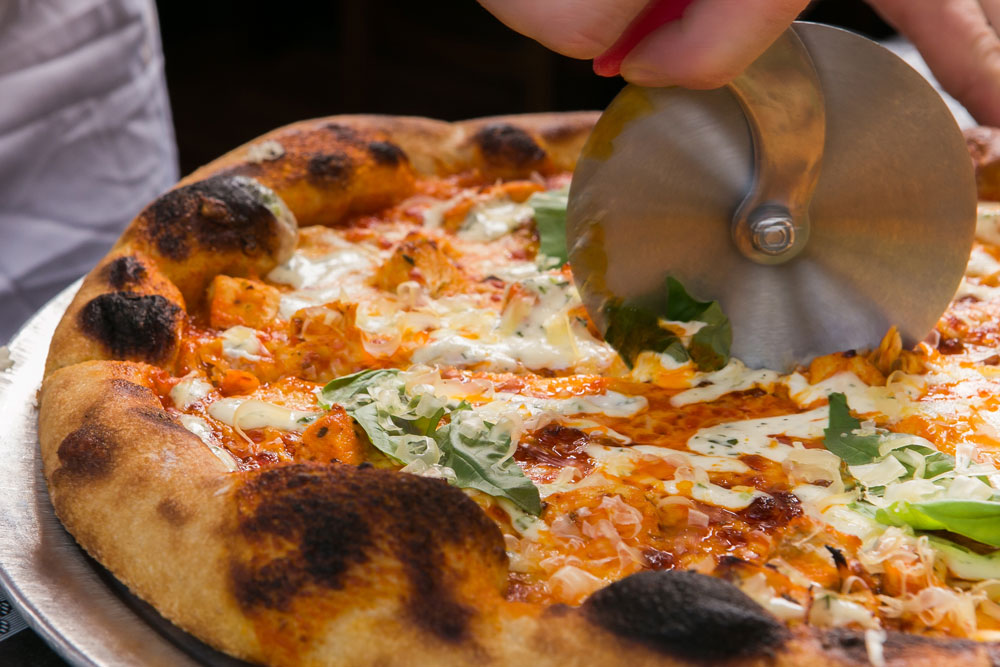 For his house regular and Neil’s Rotating Pies, Blazin isn’t shy about wading into the unrestrained American pizza parlor genre to show diners how much better those topping-heavy mixes can be with great ingredients. I’ve always been antagonistic toward the idea of Buffalo Chicken pizza. Yet even as I was ranting to my friends about how it seems like something you would serve to children at a birthday party, I was inhaling slices of Driftwood Oven’s version. If flavor explosions are your thing, you’re going to love it — there’s house-made ranch, locally raised chicken roasted with care and a blast of piquant Buffalo sauce. My pals and I all agreed, as one friend said, “They made this as chill as it possibly could be. It’s very well balanced. It feels like it’s not going to hurt me later.”

Overall, these intricate permutations are melodious in flavor, but a few miss the mark as amalgamations to top a pizza. A build such as That’ll Do Pig (apple cider-braised pork shoulder, ricotta, mozzarella, wine-shallot cream sauce, apples, parsley, pork jus) might, with a touch more acidity or a sharper cheese, work as a main course, but is it a good idea for a combination when you only want to eat one slice of the pie? I liked the spirit of it, and I loved repurposing it into leftovers, but it didn’t work for me as a pizza.

The limited items that round out Driftwood Oven’s menu are, by and large, destination-worthy on their own. Meatballs, soft and smooth, are prepared with the right amount of bread in addition to pork and beef. You can get them as a side, but they shine in a hoagie. The chosen roll is crunchy on the outside and soft as it gets to the meatball, and its sauce and cheese accoutrements add melty tang. The Italian sandwich is served inside slices of pizza bianca. Layered with meats and pickled vegetables then warmed in the oven, the combination of fat, spice and piquant flavors is enticing — except that these are meats best served at room temperature. My friends, self-styled hoagie experts, figured out the correct hack — ask them to heat the bread and then add the fillings after. 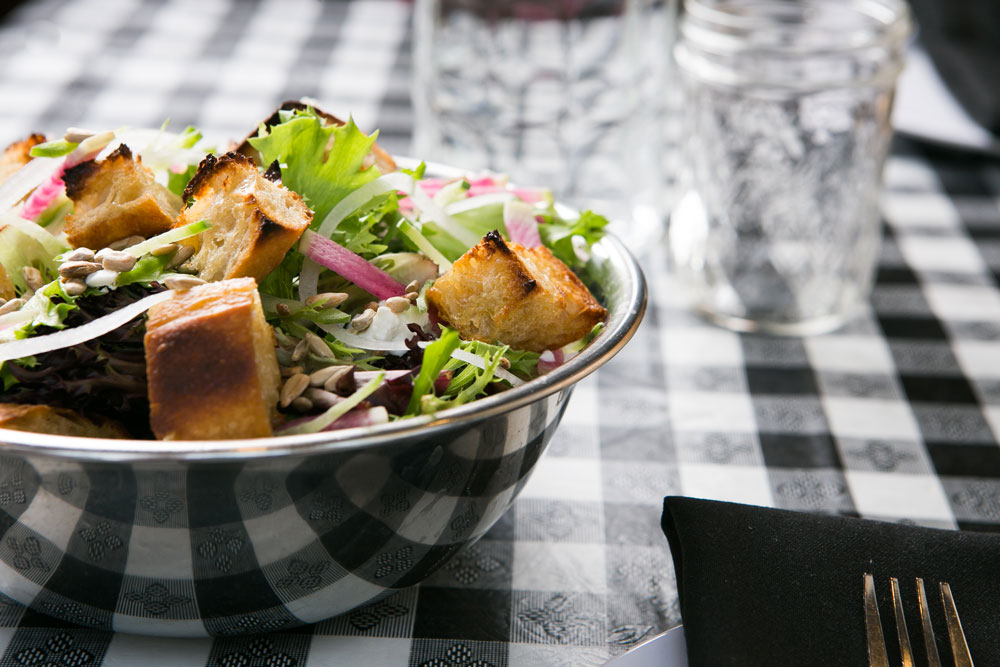 Salads get proper attention, too. I dig the mixed greens, an always-fresh blend augmented with seasonal vegetables, toasted seeds, Goat Rodeo chevre and house-made croutons. And, while kimchi doesn’t scream for a place on a pizzeria menu, it works here. Driftwood Oven’s version is sweet and bright with a ginger zing that balances spicy, funky fermentation; it is a friendly, pickled thing that gets your body ready for some rich, filling food.

Vetter oversees the front-of-house, and he brought his service standard (as well as several colleagues) from Legume. What that means is a warm crew that pays attention to the details, such as making sure your water glass is full and you always have enough napkins to indulge in a messy pie. Nobody seems rushed, yet the staff is always on the move. Here’s something — the restaurant, which now employs 21 people, has only had two employees leave (both on good terms) during its entire run of service. Vetter is having fun with the atmosphere, too — the television, which came with the space, might broadcast sports if it’s a big game, but you’re much more likely to see vintage episodes of the PBS television show “The Joy of Painting” on any given night. 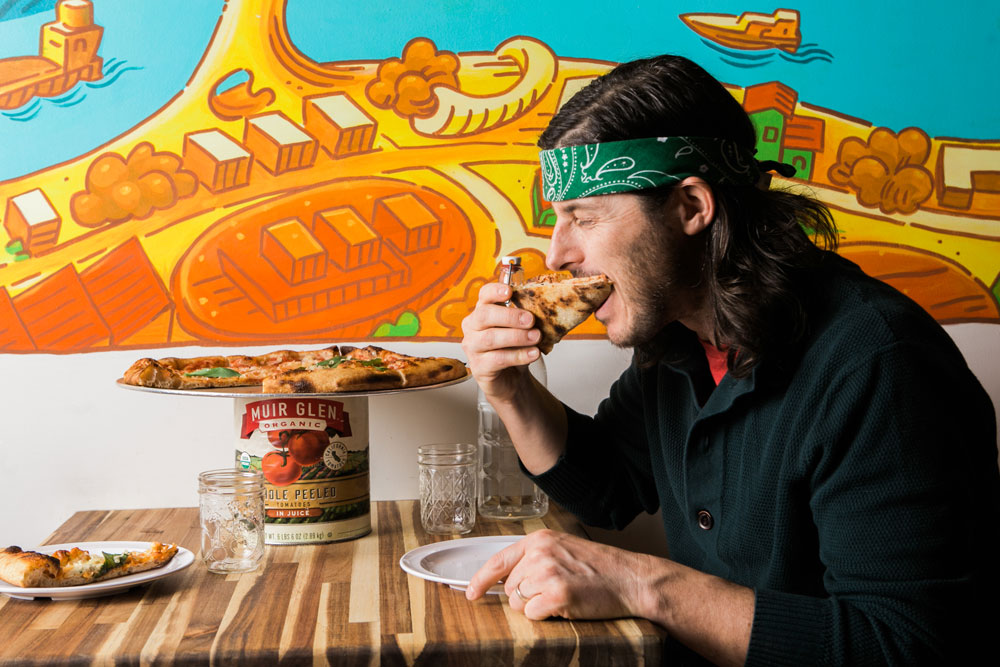 The cheerful space in the heart of Lower Lawrenceville’s restaurant row is anchored by a large mural by local artist Joe Mruk. It depicts Pittsburgh’s confluence of three rivers as a slice of pizza gently elevated from the rest of the pie. A depiction of Driftwood Oven anchors the slice at the base of the crust. It looks like a place that is built into the fabric of the city, and I have a feeling that’s going to be the case. Nearly two years in, Blazin and Vetter aren’t resting on their laurels. They’ve expanded staffing and hours over the past year, part of a consistent theme of small improvements and introductions, such as a bread-share subscription and occasional baked goods pop-ups. It all has me excited to see what happens when a place that already feels like a neighborhood institution becomes one.