Nineteen months after it was meant to launch, a combined Legume and Butterjoint is beginning to take shape in Oakland. 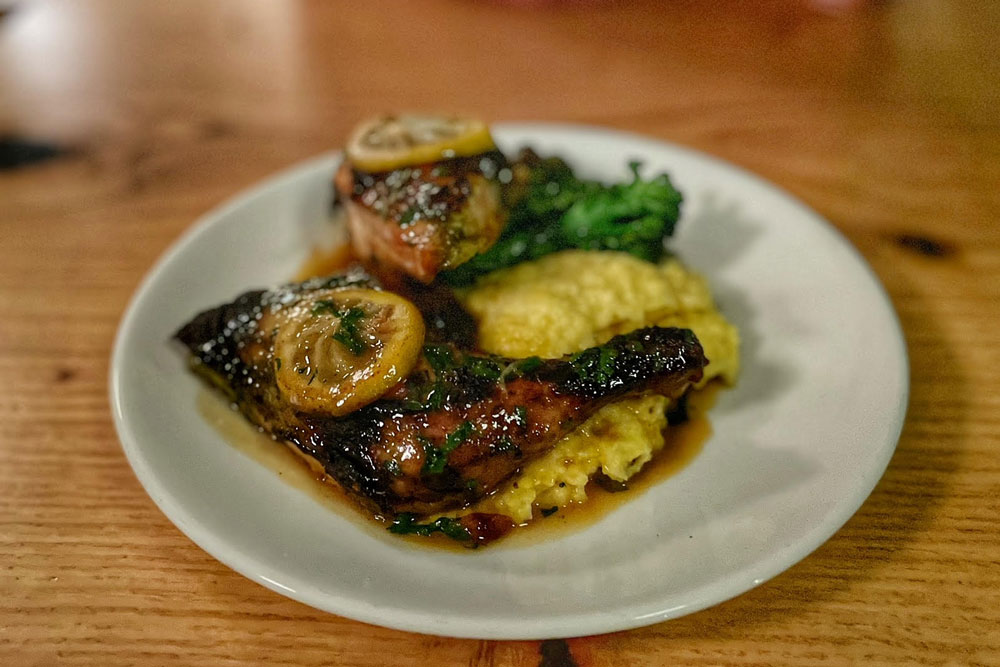 On the last day of February 2020, Trevett and Sarah Hooper closed Legume. The Hoopers were deep into the process of combining their beloved Oakland restaurant and its attached bar, The Butterjoint, into a more streamlined operation called Butterjoint All Day. Trevett Hooper, Legume chef de cuisine Csilla Thackray and Good Faith Restaurant Group kitchen manager Jessica George were working on a new menu that combined the best of both operations. They even ran a few meal services in early March to see how things would land.

And then the coronavirus pandemic struck, and the whole thing drew to a halt.

For more than a year, a skeleton crew offered prepared and frozen meals, weekly specials, desserts and pantry staples such as locally grown grains and homemade yogurt. As the pandemic lingered, many of the key staff, including Thackray and George, moved on to positions in other establishments. During this time, the Hoopers also transitioned their neighboring eatery, Pie For Breakfast, into a daytime pastry and bakeshop called Butterjoint Bakery.

When the restaurant finally opened for limited on-premise service in May 2021, it had severely reduced hours and a menu primarily of Butterjoint greatest hits such as its always terrific pierogi plates and hearty salads. The most significant change was swapping in a smashburger for Butterjoint’s long-standing tavern-style burger. 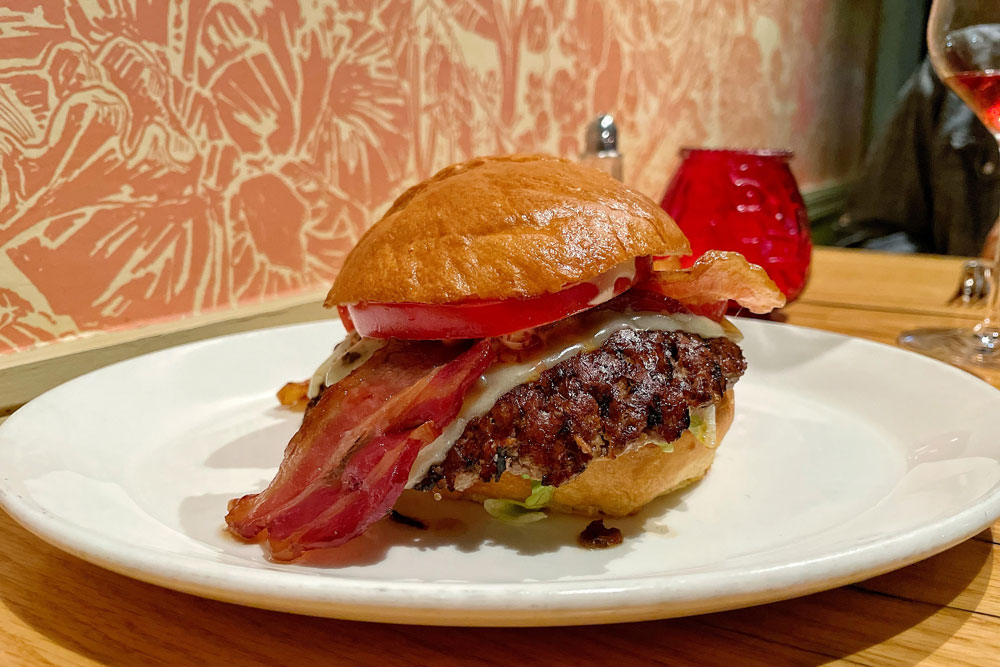 I’ll miss the tavern burger. It consistently ranked among my favorites in Pittsburgh, and when the establishment was employing a full-time butcher for a whole-animal meat program, it was the loftiest burger around. Don’t sweat, hamburger fans — I’m sweet on the new burger, too. It has a brawny beefiness, something you don’t always find in a smashburger, which often is dominated by Maillard-reaction umami. The burger’s accoutrement will rotate; when I had it a few weeks ago, the combination of gruyere, Butterjoint sauce, lettuce and sour dill pickles hit a well-rounded scale of flavor.

At long last, a revived Butterjoint (the “All Day” part of the name is gone) emerged earlier this month with expanded hours — including a rare-for-Pittsburgh Monday night dinner service — and a developing menu more in line with the vision first established so many months ago. The front dining room is updated, too. Designer Thommy Conroy’s fanciful, inviting work pulls together a brighter color palette and artwork, including an original mural in what once formerly was a drab section of the restaurant. A Gen-X-heavy soundtrack featuring artists such as The Ramones, INXS and The Pixies also serves to bolster the more relaxed vibe. 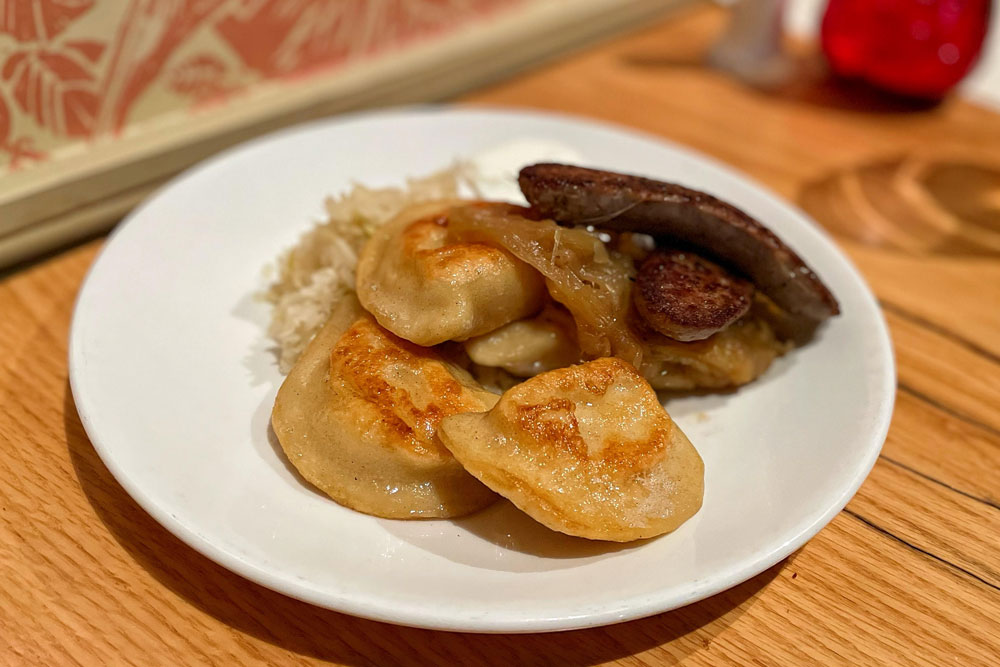 What remains a work in progress is merging the culinary elements of the former Legume’s gravitas with the more laid-back Butterjoint into something cohesive.

“We have these two rivers: the Butterjoint River is meeting up with the old Legume River. But they’re completely different rivers. And we had to figure out how we are going to make that into one,” Hooper says.

One way they’re doing that is with a new executive chef, George Austin. Over the next few weeks, Austin, a chef with more than 20 years of experience in kitchens around Pittsburgh, is working with Hooper to introduce new dishes to help bridge those rivers. 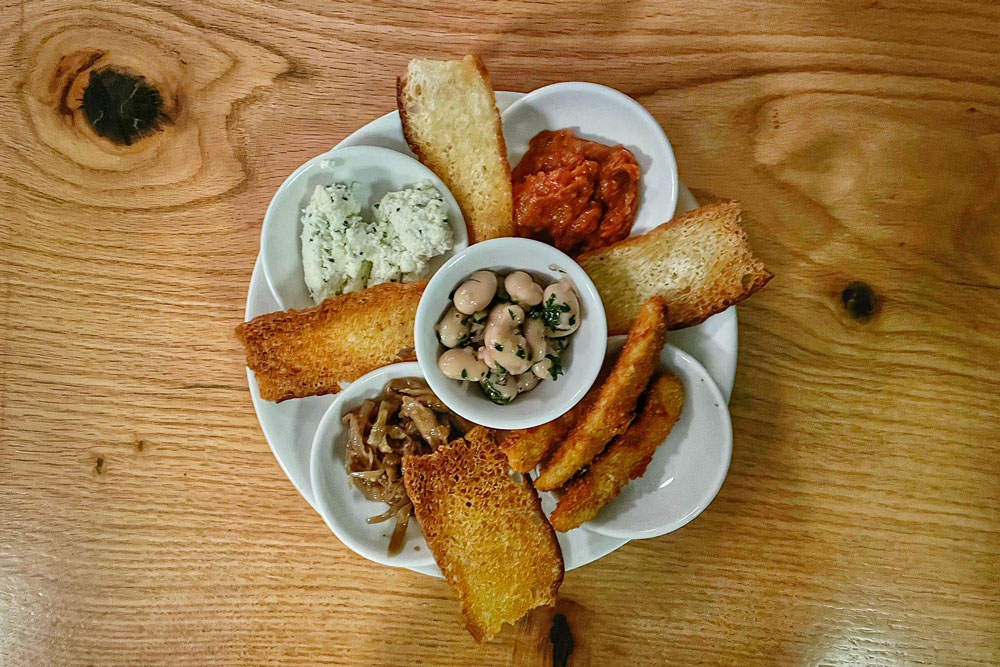 A dish such as Sarah’s Vegetarian Delight indicates where the menu might land. When I ordered it on a recent visit, I loved the little picnic of flavors and textures in the piles of ajvar, fried pickle, marinated lima beans, melanzane sotto aecto and herbed farmer’s cheese. Each component worked on its own (indeed, they are listed individually on this week’s menu), and I liked how you could mix and match them into more complex bites, too. For example, the smooth herbaceousness of the farmer’s cheese and tangy ajvar made for a flavorful combination on the crisp crackers it was served with. It’s a lovely shareable item to start a meal — as is another potentially popular dish, a big crock of plump and tender mussels in white wine, tomato and fennel broth served with a hunk of focaccia — but also works as a standalone light meal.

Sauerkraut balls have popped on and off the Butterjoint menu for years but ought to be a keeper now. The golf-ball-sized bites, served with honey-mustard sauce, mingle creamy, pickly, crunchy and just a little funky. My first thought when I ate one was to wonder why this German Mennonite snack wasn’t featured on more bar menus around town. But as my pals and I talked about the dish, we landed on the idea that the thing that makes it exceptional at Butterjoint is that even though it’s seemingly simple, the bar snack is made better by the kitchen’s fermentation program (the sauerkraut is, as it always has been, homemade) and how it’s prepared with an attention-to-detail every step of the way. 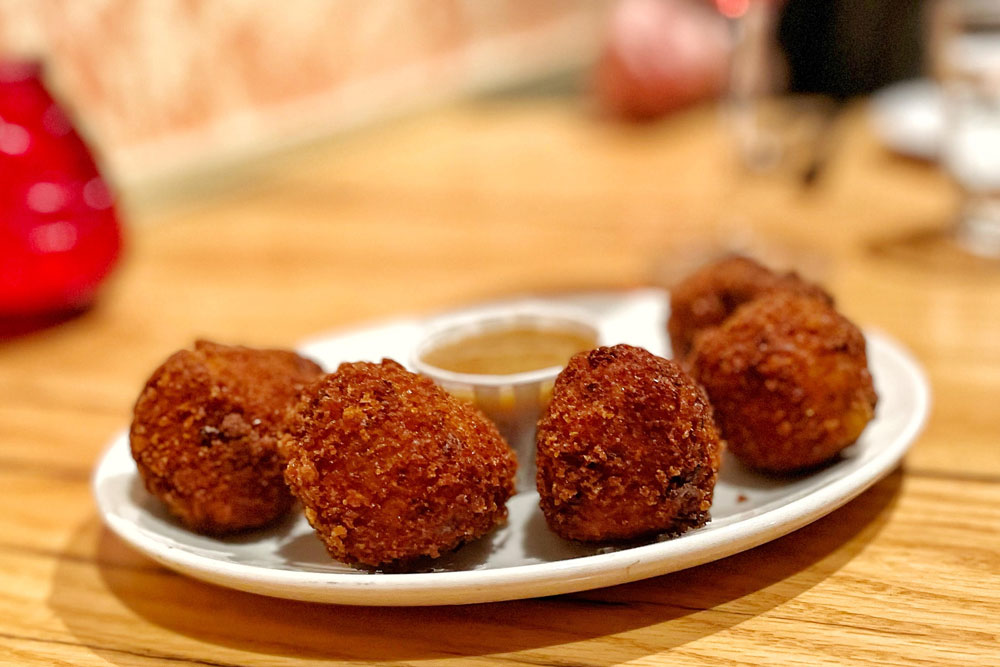 Hooper and Austin are still trying to hone in on what the larger format dishes will look like and how they’ll fit in on a menu that ranges from fish and chips to pan-roasted swordfish with lemon-caper butter and mashed white beans.

“Are we going to a fine dining restaurant or a bar? Right now, it’s a mix of both. We want to give it a little time to see what’s going to happen, but we do need to find a middle ground,” Hooper says.

A newly introduced roast chicken dish — a remarkably tender and herbaceous half-chicken with crispy skin popping with flavor — served with tender-crisp broccolini and corn grits, felt like the right kind of balance for a not-to-fussy but still-made-with-care bistro meal, as do classics such as the pierogi plate, which now features house-made sausage.

Even as Butterjoint metamorphosizes into its latest form, you can feel the nearly 15 years of shared ethos, shared knowledge and shared energy that cement a through-line as one of Pittsburgh’s most essential restaurants. The version that’s emerging now is a reflection of the era. It’s more restrained in ambition than previous iterations but just as worthwhile a destination.