Once Thought to be Closed for Good, Pittsburgh’s Brillobox Reopens

The Bloomfield bar, restaurant and performance space returned this past weekend with new fixtures but the same energy that made it a Pittsburgh institution. 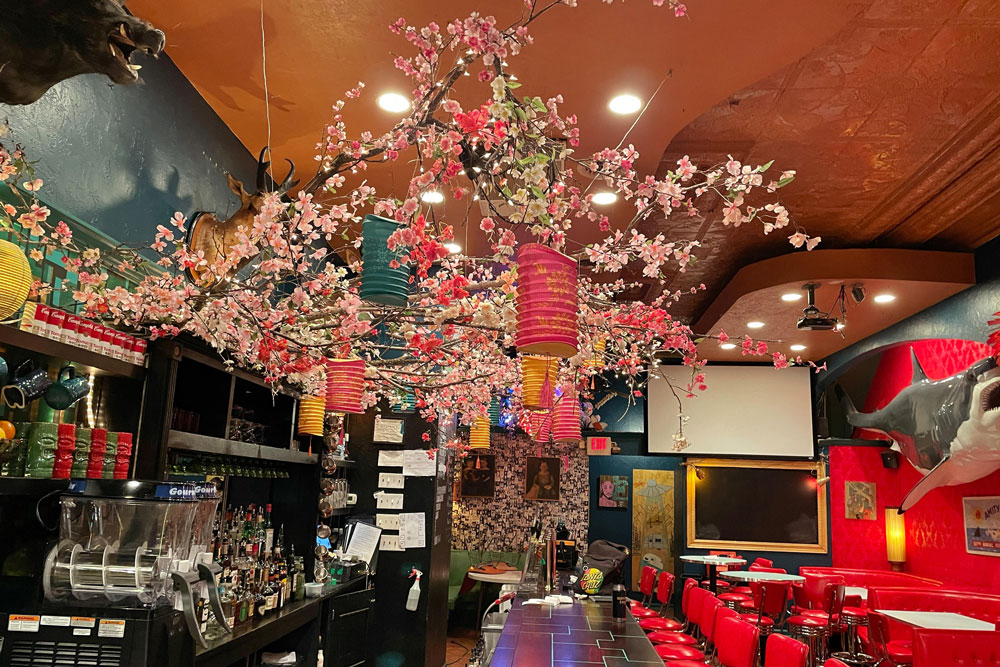 Brillobox, once one of Pittsburgh’s most beloved nightlife establishments, reopened this past weekend following a 19-month hiatus.

“I didn’t want any fanfare or any big opening parties. I just wanted to ease into it,” owner Lou Ickes says. “It wasn’t without a couple of bumps and bruises, but it was good. It’s like jumping back onto a roller coaster.”

Ickes closed the Bloomfield bar, restaurant and performance space he owned with his wife, Janessa Walter, in August 2020 because they couldn’t muster enough revenue to survive the carryout-only restrictions during the initial wave of the coronavirus pandemic. The closure was meant to be permanent.

He and Walter listed the business for sale, but Ickes says they didn’t receive any reasonable offers in the following year. “We’d lost all of our savings paying the bills while it was for sale. We were about to lose our house because it was tied to the business,” he says.

Ickes says he was struggling personally, too. “I thought it would be a lot easier to get out of the bar business than it was. It was horrible,” he says. “I went from being super-social, maybe to a fault, to hiding and not interacting with anybody.”

Ickes says he tried his hand at other occupations, but he felt like his sense of identity and vocation were tied to Brillobox. So he applied for and received a Small Business Administration Shuttered Venue Operators grant, which provided a lifeline for him to reopen the space (Walter isn’t involved in the reboot). “It gave me another chance,” he says. 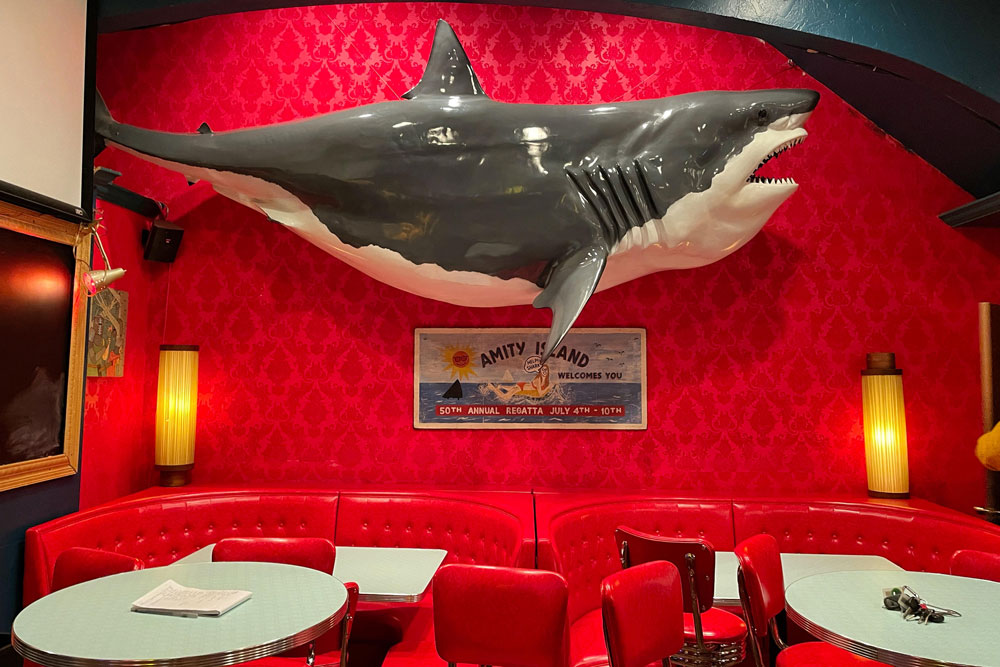 He thought he’d be able to get up and running as early as November 2021, but Brillobox’s Allegheny County Health Department permit had lapsed, which meant that the quirks that had been grandfathered in when the establishment opened in 2005, including its plumbing and kitchen, had to be rebuilt. Brillobox’s signature candy-red booths and chairs might look the same, but they are all new, as is the bar, which was designed by Urban Tree. Nevertheless, the overall design and vibe of the space — from its taxidermy and great white shark to its floral awning above the bar — will be familiar to anybody who had visited the establishment since Ickes and Walter purchased the bar in 2016.

As it was prior to closing, Brillbox’s restaurant menu is an appealing mix of easy-to-love bar food with a heavy emphasis on vegetarian- and vegan-friendly dishes. A two-person culinary team runs the kitchen; Tallulah Elvis Poodle oversees the menu and handles daytime prep and Mike Bonello executes the menu in the evening. 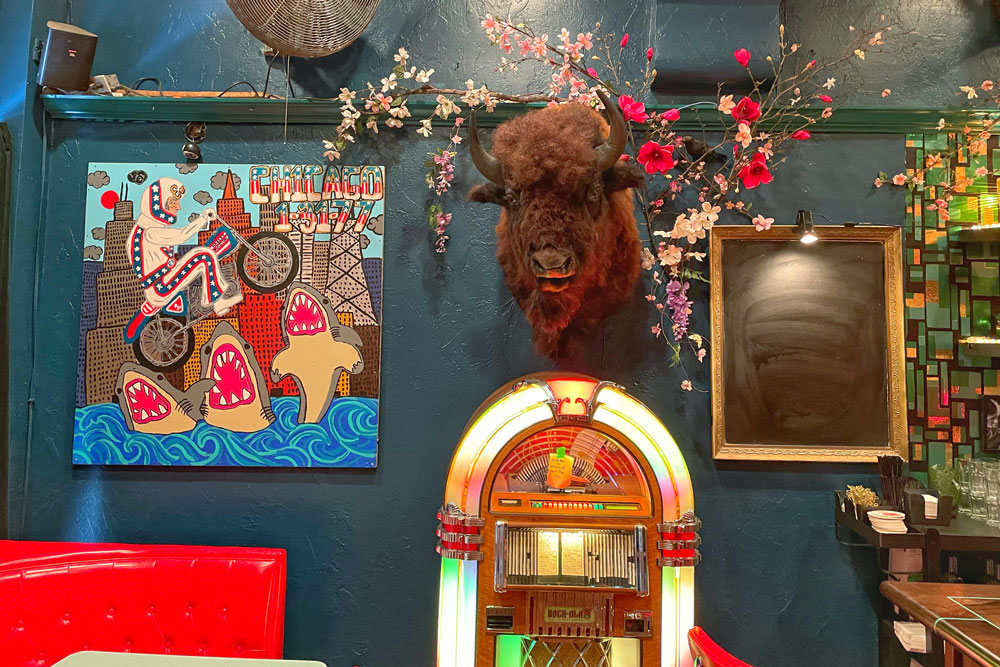 As of now, there isn’t a developed cocktail list at the bar, but Ickes expects the bar team will add one once it finds its footing. Although Ickes thought it might tilt a little more toward the cocktail side with a refreshed back bar and, perhaps, the addition of an amaro list, it looks like Brillbox will continue to occupy the increasingly rare space between high-volume and cocktail bar (it also has an excellent beer list).

“We were trying to take a new approach, but you don’t control how that works. We can do all the cute new glassware and new liquors, but Brillo is Brillo and that was pretty clear from opening weekend. It is what it is here and I’m totally OK with that,” Ickes says.

Ickes says that a comedy show and a band are scheduled for later this month in the second-floor performance space. After that, he says, he’ll slowly ramp up bookings in the small venue.

Brillbox’s reopening was celebrated on social media, with #brilloselfie galore and even a welcome back poem from “people’s poetess” Rachel Ann Bovier entitled “!! Brillobox !!”

It’s all reflective of a bar that long ago was a hip new spot and rode through successive waves of cool to become an institution.

“I bitched and moaned about this place for years, but being closed for this long gave me a little bit of perspective. I missed it, bad,” Ickes says.

However, he adds, Brillobox’s reopening isn’t about revisiting bygone nostalgia. “It’s not about this place or this bar or these booths or the shark or the buffalo head. It’s about people being here with their friends again. That’s it.”