Our new feature by Lori Jakiela offers glimpses into the lives of our fellow Pittsburghers. Up first, Brillobox owner Lou Ickes on the pandemic, metaphysics, corporate cruelty and the future of his Brillobox shark. 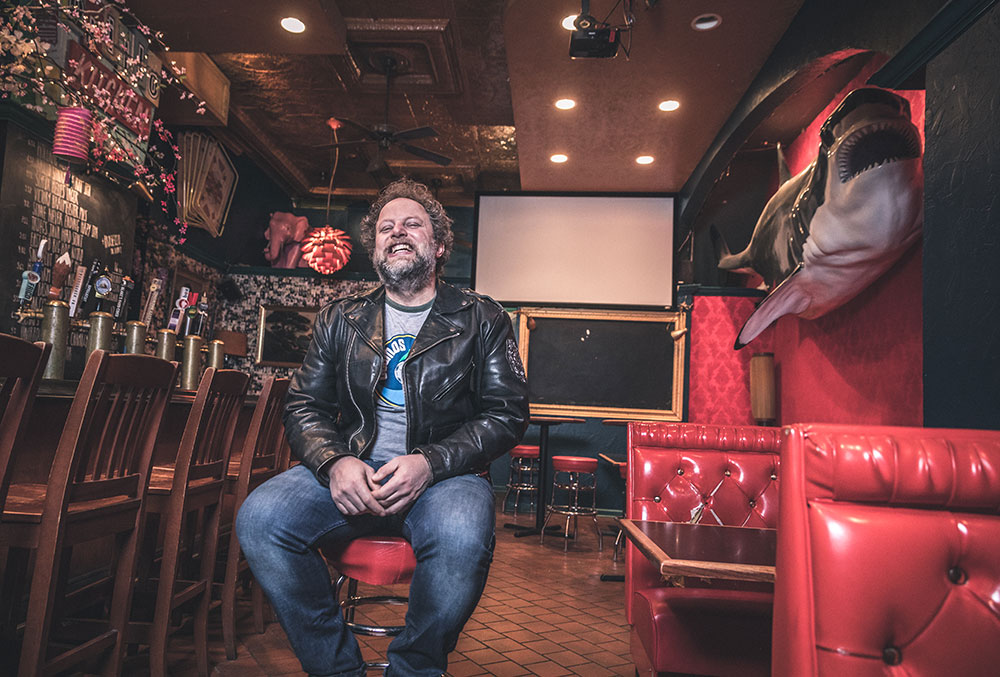 Lou Ickes sits beneath a large black-and-white movie poster. The movie is “Jaws.” We’re talking on Zoom because of the pandemic – Lou from his home in Lawrenceville, me in my basement in Trafford. On the computer screen, it looks like the shark, jaws open, teeth the size of toasters, is about to devour Lou headfirst, which, he says, is how he feels some days since the COVID-19 pandemic led to the shutdown of the Brillobox, a landmark Pittsburgh bar and concert venue he and his wife Janessa Walters owned since 2015.

“We were about to have our fifth anniversary as owners,” Lou says, adjusting his Pirates baseball cap and running a hand over his chin that, during the Brillobox days, was mostly hidden under a woolly beard. Now, after trying a corporate stint post-Brillo, Lou is clean shaven. “We didn’t make it.” 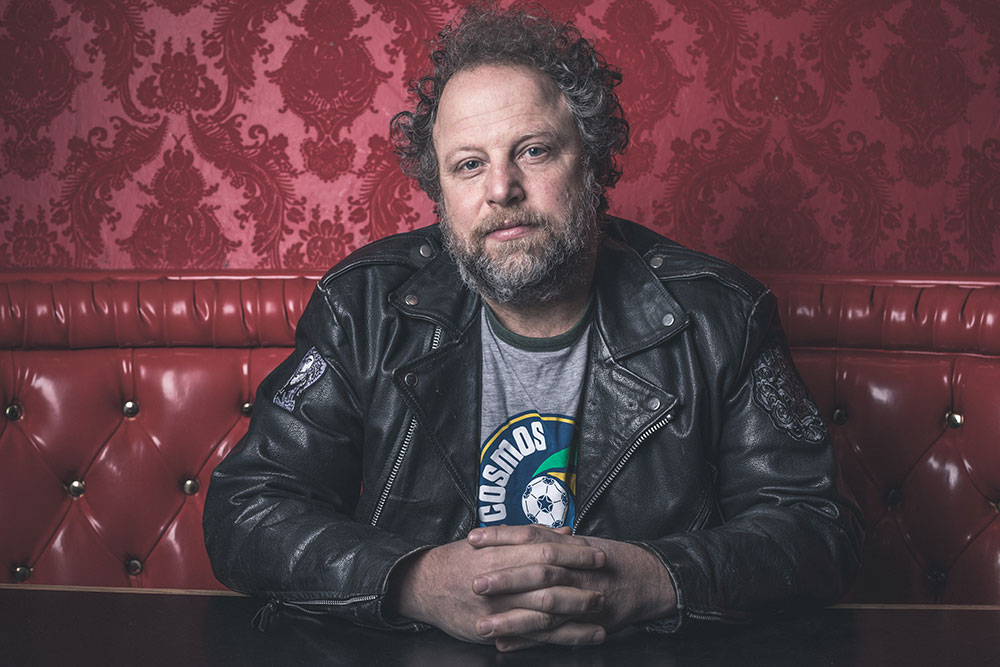 I’ve been having my own pandemic meltdown since early spring, when I realized that no matter what we would try, it was over. At first, every morning, I was in full-blown tears worried about what we were going to do. My wife’s not a crier – not one tear has been shed there – but she has her own floral business. When we closed Brillo, she lost her storefront, too. She’s been working out of the house. She knows her side of life – flowers, people getting married, people dying – will come back some day and she’ll make it work. But right now, our house is full of flowers and I’m still crying a lot and we’re still paying rent and bills at Brillo. Some days it gets really dark.

It’s not just us, of course. The Rex closed. Howlers. Hambones. So many places. I try to imagine what’s going to happen to Pittsburgh. Before, I thought we had too many things going on. And now. When your business is people, when you’re in the business of bringing people together, when you lose that, you lose the soul of the place.

At first, we tried takeout. We opened and closed twice. But I was faking it. I kept trying to tell myself it would be all right, but now who knows when this is going to be over and how we’ll all be permanently changed by that?

Lately, I’ll be watching something on television and people on screen will hug and I will be like, oh man oh jeez don’t do that. I was with my family when my nephew turned 8. We had a birthday party. But no hugs, no nothing. Most days it feels like the human-ness has been sucked out of everything. I don’t know what this will do to us in the long run. I think we’re already damaged a bit. 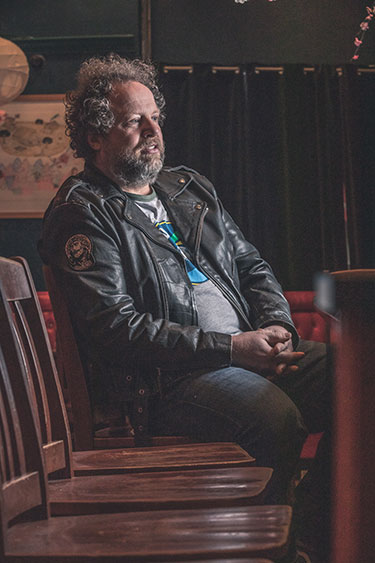 I miss people. I miss our employees. I miss the human vibe. I miss Brillo’s wildness. I miss the life of the place. I didn’t realize how much a part of me the bar was.

After we closed, I tried to find something new. I started a sales job. I’d go in early and leave late. I tried to be into the idea of new beginnings. I pulled it off for two weeks.

After he finally hung up, I was drenched in sweat. I went home and told my wife, “I’m done.” Running the bar could be tough, but I was never treated poorly and I try not to treat other people poorly. I’m not used to cruelty.

It felt good to leave, but now I worry about where I am going to be able to fit. Where can I work and not go crazy? I don’t think I could have a normal job at this point in my life. I don’t know what normal is. Cruelty maybe. I hope not.

Right now, I’m taking philosophy classes online. We’re talking about free will and determinism. I’m writing my final paper on metaphysics in “Star Trek.” I ordered a giant bean bag so I can sit in it and read philosophy books. I think it will be life changing. I couldn’t imagine I’d be 50, looking forward to a giant bean bag and taking a class in metaphysics, but the void is so giant. There’s something missing, right in the heart. It’s hard to feel anything some days. Some days I’m glad for the tears. 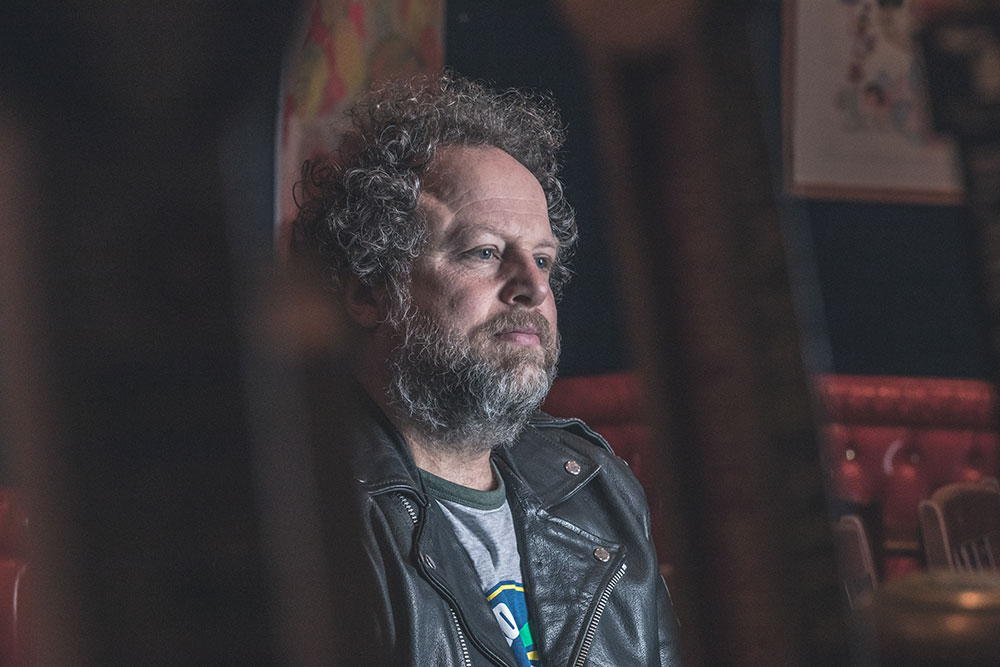 As of now, the Brillobox waits to be sold. It sits frozen in time. The paintings by Lou and other artists; the jukebox; the red pleather booths; the ceramic Elvis busts; the specials board are all still there, along with Brillo’s famous 18-foot replica of a great white shark. Since 2016, the shark has chomped down on the plastic head of a certain politician. When Brillo sells, Lou says, everything will sell with it, except for the jukebox and the shark, which will find a new home in the jujitsu studio where Lou has been a passionate student. He hopes to return one day.

This article appears in the Jan/Feb 2021 issue of Pittsburgh Magazine.
Categories: From the Magazine, Hot Reads, Stories of Our Neighbors