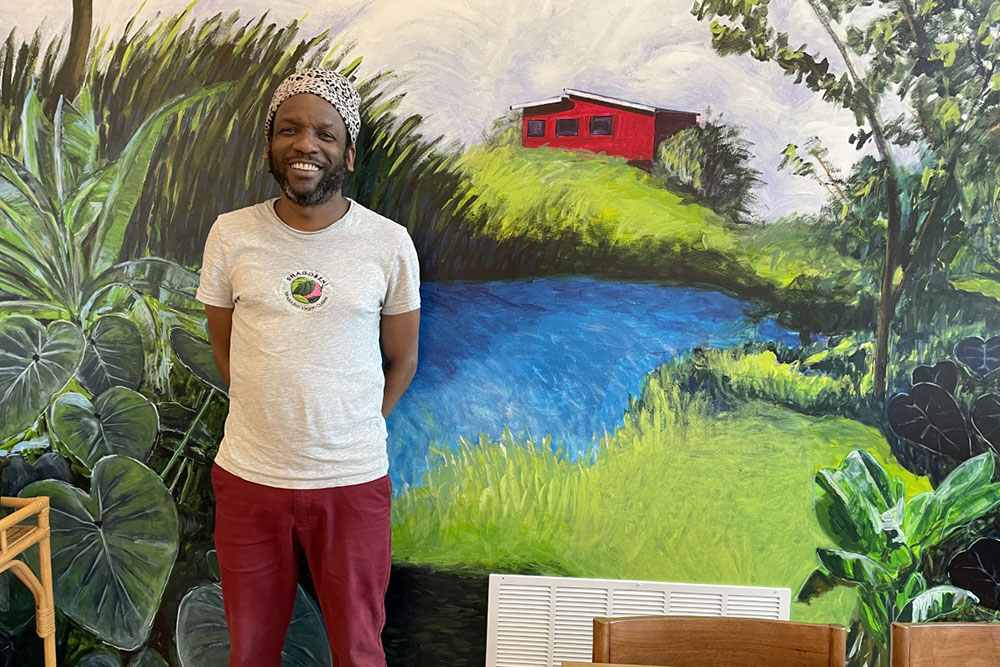 It’s been a rough couple of months for vegan restaurant-goers in Pittsburgh. Three of our favorite vegan and vegetarian eateries announced closings within a few weeks of each other, and other vegetable-forward restaurants such as Bitter Ends Food Co. recently shuttered. There’s some better news, however, from one of Pittsburgh’s other top vegan establishments.

ShadoBeni, which had operated as a pop-up at farmers markets, now has a standalone restaurant on the North Side.

“It’s been steady from the start. We already have people who have become regulars,” says chef/co-owner Ulric Joseph, who operates the business with his wife, Jennie Canning.

Joseph’s focus on vegan Trinidadian cuisine is unique in Pittsburgh. The Caribbean island is a culinary crossroads, drawing influences from an oftentimes dark colonial history that has over the centuries incorporated East Indian, African, Creole, Chinese and Western European foodways, augmented by indigenous ingredients, into its cuisine. Although Trinidadian food isn’t necessarily vegan, Joseph, whose paternal grandparents were farmers, says it’s not a big twist to prepare it that way. 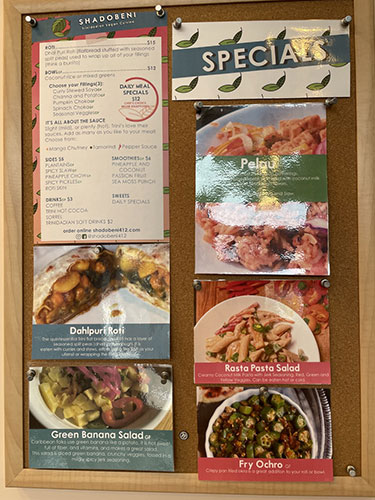 “We’re starting small and building slowly,” Joseph says of the menu. “I don’t want to tell people we don’t have this or we don’t have that. I’d rather keep the menu tight and make sure we have enough of everything we say we’ll have.”

He’ll always offer two dishes on weekdays — dhal puri roti and bowls — both of which are customizable. Dhal puri roti is a flatbread dusted with split peas and stuffed with curried stewed soya, chickpeas and potatoes and spinach chokra (you can choose up to three fillings) and seasoned with Joseph’s house-made sauces. The bowls are similar, except they have a base of coconut rice and greens. He’s also offering daily specials such as pelau (a mix of rice, carrots, pigeon peas and soya stewed in coconut milk, burnt sugar and spices) and turmeric rice with jerk chick-un (a meat-free chicken substitute) and sweet peppers.

On weekends, Joseph offers doubles, the popular Trinidadian street food consisting of two pieces of the turmeric-spiced flatbread bara topped with curried chickpeas and condiments. Joseph says here’s where having a brick-and-mortar restaurant, rather than operating solely at the farmers markets, makes a difference.

“We had to prepare the doubles in advance and sell them frozen when we were at the markets. And now I can make it on the spot just like the way we do it at home,” he says.

The menu is rounded out by beverages such as sea moss smoothies, sorrel (hibiscus) drink and hot cocoa that highlight important Trinidadian crops, as well as a few house-made desserts.

Aside from the ingredients native to Trinidad, Joseph says his goal is to get just about all his vegetables and mushrooms from local farmers once the season gets going. He’s going to add specials highlighting regional ingredients now that Western Pennsylvania’s agricultural season is rolling. Look for corn soup, for example, later this summer.

He’ll get those at the local markets, too. Canning, who manages the business, will continue to oversee the ShadoBeni stands at the Bloomfield and North Side farmers markets. “We have a bunch of customers out there who buy from us every week, and we want to make sure we can still service them,” Joseph says. 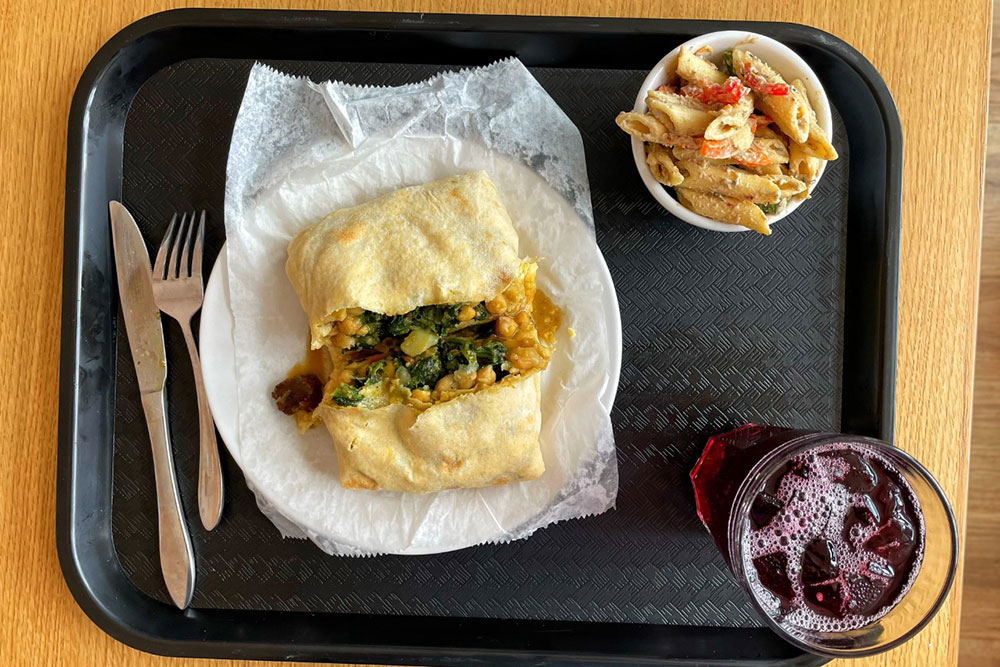 The 12-seat restaurant (plus a few outdoor seats) is cheerful, with a massive mural as a focal point of a farmscape in Trinidad that Joseph painted. Joseph worked as an artist (he was the 2019 Three Rivers Arts Festival Best of Show winner for Juried Visual Art Exhibition) and professor prior to launching ShadoBeni with Canning in 2019.

“This was the view outside the back window of my friend’s house. It’s where I go to unwind. I’d look out this window and be marveled by all the green. A lot of these plants are edible, too,” he says.

Joseph says that (in addition to sharing the cuisine of Trinidad) sustainability is the restaurant’s core mission. He’s eaten a vegetarian diet since 1995 and believes that serving vegan food is a means to reduce the potential harm our diets can affect the climate. To further reduce waste, Worm Return, a nearby composting business, picks up all the food scraps and used servingware twice a week.

“I’m not trying to change the world with this restaurant. But you can change, even if it’s in a small way, how you, your family and your community eat. That in itself is a big move in the right direction,” Joseph says.