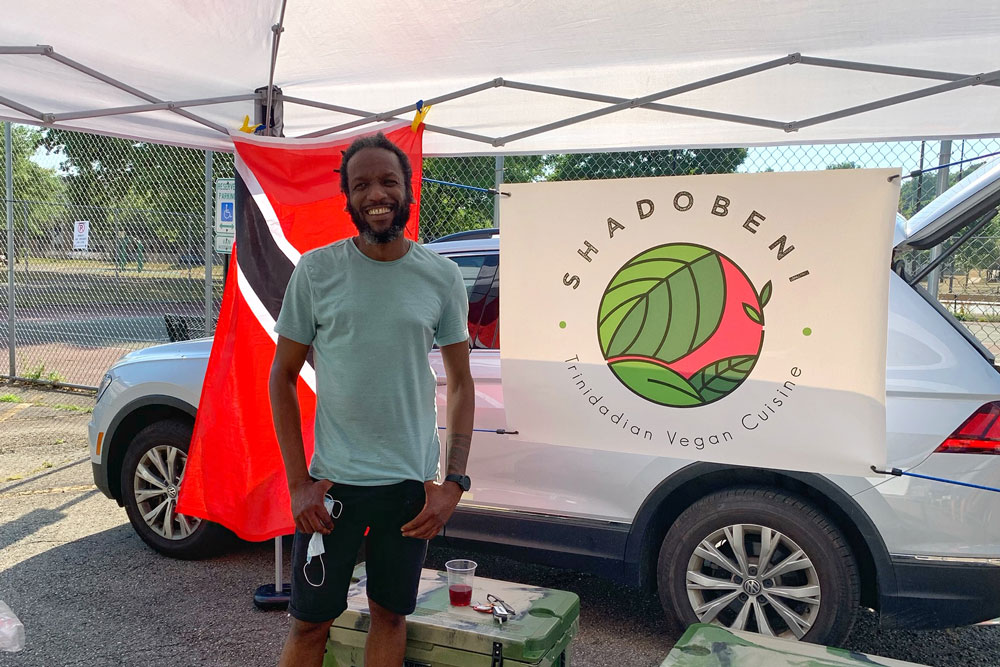 ShadoBeni, the Trinidadian vegan stand that pops up weekly in Squirrel Hill, East Liberty and Lawrenceville, is emerging as a standout in Pittsburgh’s growing company of excellent prepared-food offerings found at the region’s farmers markets.

It’s run by Ulric Joseph, an artist who spent seven years driving back and forth from Pittsburgh to Baltimore to work as a professor at Maryland Institute College of Art. The long commute dragged on him, but it also gave him a lot of time to think about how he wanted to navigate his life. Joseph knew, for example, that he preferred creating art to teaching it (he was the 2019 Three Rivers Arts Festival Best of Show winner for Juried Visual Art Exhibition).

Joseph named his concept ShadoBeni to honor the pungent herb (also known as chadon beni and culantro), which grows wild all over Trinidad. The heart of his menu is doubles, the popular Trinidadian breakfast dish and street food. It begins with bara, a turmeric-spiced, fried flatbread. The bara is topped with curried chickpeas and a variety of vivid chutney including bright shado beni, fiery pepper sauce and sweet, tangy tamarind; cooling minced cucumber adds additional texture. You’ll see a lot of Indian influences such as curry and chutney in Joseph’s cooking, signs of a cuisine informed by Trinidad’s multifaceted cultural and colonial history. “It’s such a mixed culture there that it’s hard to wrap your brain around it,” says Joseph, who moved from Trinidad to Baltimore when he was 24.

Lay out two bara, top them with the chickpeas and the chutneys, and have at it; Joseph’s doubles are among the most satisfying dishes in Pittsburgh right now. The layering of toppings also speaks to his artistic voice. “I go for the bright colors in my art when other people might not. It wouldn’t surprise me that it shows in my food,” he says.

Opening a restaurant wasn’t Joseph’s intended path to leave his job teaching, but, following a family visit to Trinidad, his wife, Jennie Canning, suggested he pursue cooking the island’s cuisine full time. “She noticed so much of the food is vegan. And that’s something Pittsburgh could use more of,” Joseph says. “I always was the person cooking when we had friends over to visit. I’d get good feedback from friends and family,” he adds. 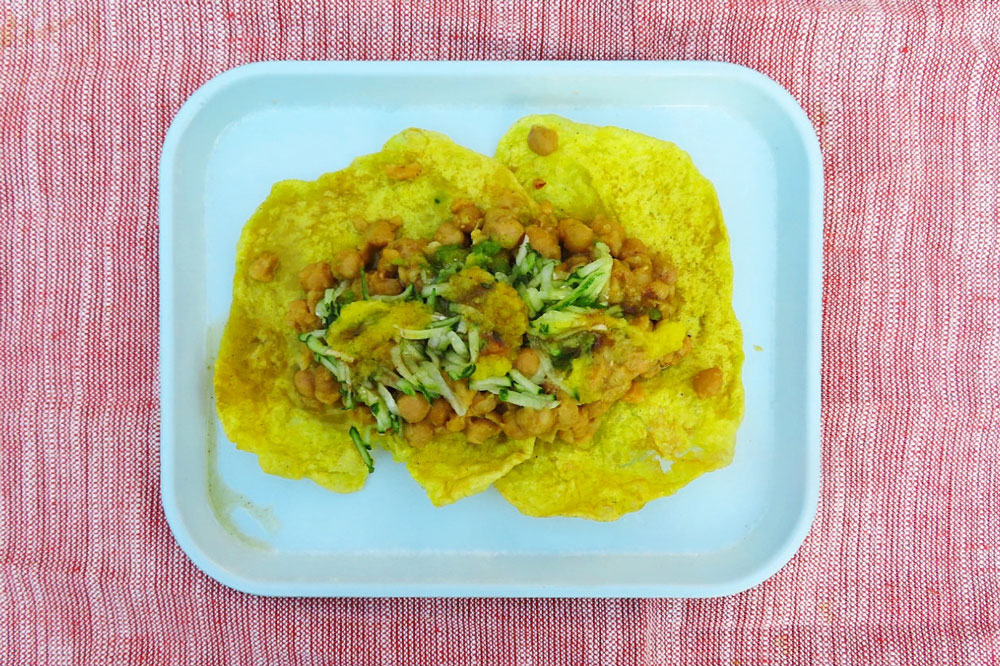 For Joseph, food has long been a source of delight and strength. He’s eaten a vegetarian diet since 1995 (his love of cheese keeps him from a fully vegan diet). His paternal grandparents were farmers, and, he says, “My mom would send me out to go pick shado beni. Or, she’d say go outside and get some tea from the tea bush. Food was medicine because other medicine had to be imported.”

Trinidad is the largest island of Trinidad and Tobago, the southernmost island nation in the Caribbean. To that end, Trinidad’s contemporary cuisine represents a centuries-long fusion of the foodways established by enslaved and free Africans, indentured Indian laborers, Spanish, French and British colonizers and Chinese immigrants, as well as the indigenous ingredients of its geography.

Joseph says he keeps the ShadoBeni market menu tight because of the limitations of what’s possible at a market stand. He always has doubles on his menu, and, typically, serves one other primary item. Coo Coo and Callaloo, a dish with cornmeal (the Americas) and okra (Africa); pastelles, a Spanish-influenced dish popular throughout the Caribbean; and pelau, a Creole dish of rice and pigeon peas simmered in coconut milk, are a few of his recent offerings.

The good news for those of us who are eager for a deeper dive is Joseph is in the process of building a standalone ShadoBeni on the North Side. He expects to open in November. “I’m all in with the restaurant business,” he says.

Until then, orders are opened on the ShadoBeni website on Wednesdays for the upcoming week’s markets.