The new venture from the big Burrito Restaurant Group pops up this week at Bakery Square with a full opening in early March. 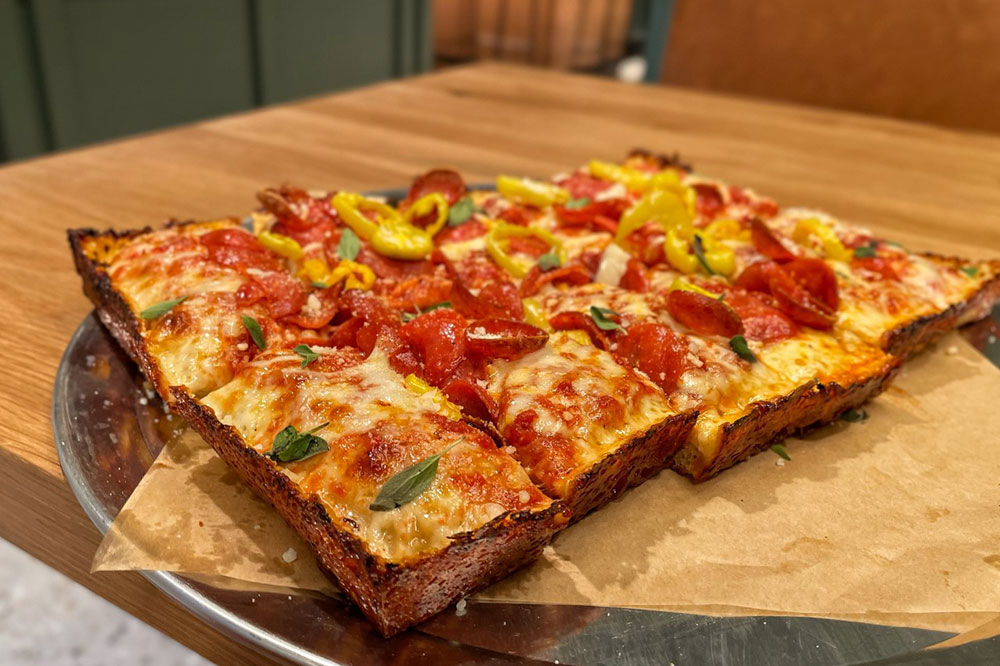 Pittsburgh is set to get another excellent pizza option when big Burrito Restaurant Group’s latest venture, Alta Via Pizzeria, opens in Bakery Square in coming weeks.

“Pizza has been in our brains for a long time,” says big Burrito corporate chef and president Bill Fuller. “Before Alta Via, we asked ourselves if it was going to be pizza and pasta or just pasta. We went with pasta, and a little more upscale, but the pizza part never went away,” he says, noting that a similar concept was in the works for Lower Lawrenceville prior to the coronavirus pandemic.

Alta Via Pizzeria is helmed by longtime big Burrito chef Darren Layre, who started preparing pizza in Alta Via’s O’Hara kitchen several years ago. “It all started with sheet tray grandma-style pizzas for staff meals. That was the seed. From then on, we met every week. We made pizzas every week. And here we are,” he says.

Look for two permutations of pizza in Bakery Square: a 14-inch round pie and a focaccia-based square pie. The dough for both pizzas is fermented for two days prior to baking and contains approximately 10% percent whole wheat flour. The pies are cooked in a PizzaMaster electric pizza oven, which is all the rage right now. “You can cook basically any style of pizza in them,” says Fuller. 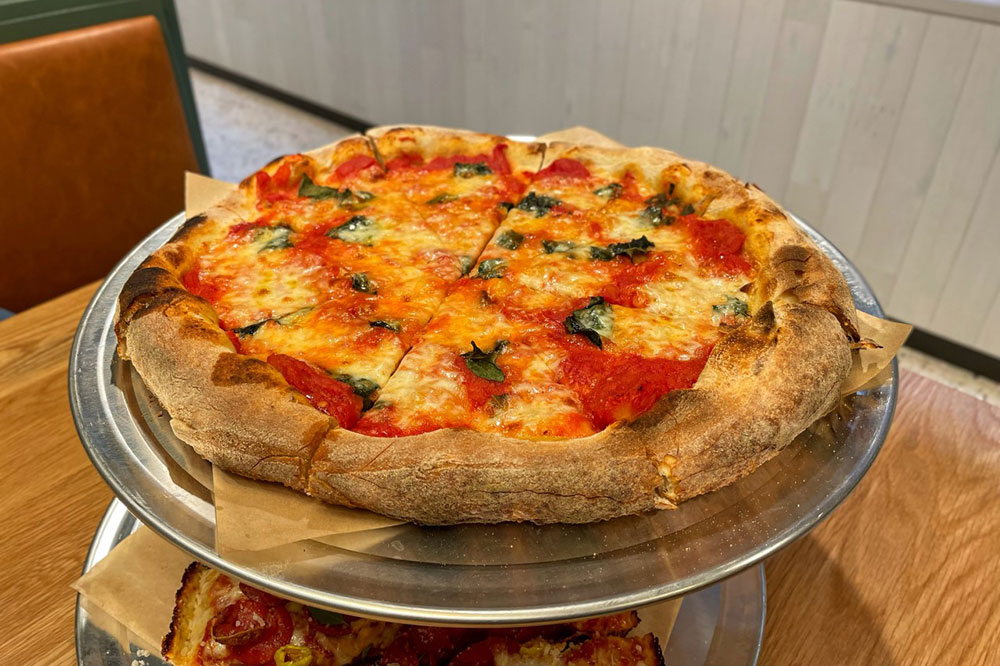 The round pie is influenced by California establishments such as Flour + Water and Delfina’s, a bakers’ pizza that synthesizes New York and Neapolitan styles. The lower-hydration dough is made with a blended sourdough and yeast starter, which helps with the structure of the pizza and adds a soft back-note of lactic acid tang. It’s a lovely thin-crust pie, with a little bit of crackle on the perimeter and a gentle tug in the center.

The restaurant will offer a variety of round pie builds ranging from “Basic” (cooked red sauce with mozzarella and provolone blend, topped with Grana Padano and fresh basil) and “Margarita: (house-pulled fresh mozzarella, crushed fresh tomato, garlic and basil) to more elaborate specialty options such as a buffalo-chicken-influenced pie called “Mad Mex San Fran Wild.” There also is a vegan pizza on the opening menu.

The square pie draws influences from Detroit-style with its lacy frico edges but is about half as lofty. The focaccia base is light and crispy, and will be available with builds such as “Pepperoni Classic” (red sauce, pepperoni, hot peppers and fresh oregano) and “Artichoke” (white pie with fontina, artichokes, blistered tomato, Pecorino Romano and rosemary).

Layre says the specialty pies will expand and change as we move into the growing season. “We’re in a low point in the seasons. There isn’t much that’s popping right now. So we’re playing with the pizza fundamentals right now. We’ll hit those baselines and then get into more fresh produce later,” he says.

The rest of the establishment’s menu is a streamlined version of the Alta Via menu (that establishment is set to open a second location Downtown in Market Square early next year).

There are vegetable side dishes such as asparagus and broccolini, appetizers such as pull-apart garlic knots, tuna crudo and fried calamari, and various salads. For diners interested in heartier meals, there is a small selection of pasta such as cavatelli with rapini and sausage and sandwiches such as the AVP burger and eggplant parmesan, as well as a selection of desserts. The establishment has a liquor license, too. 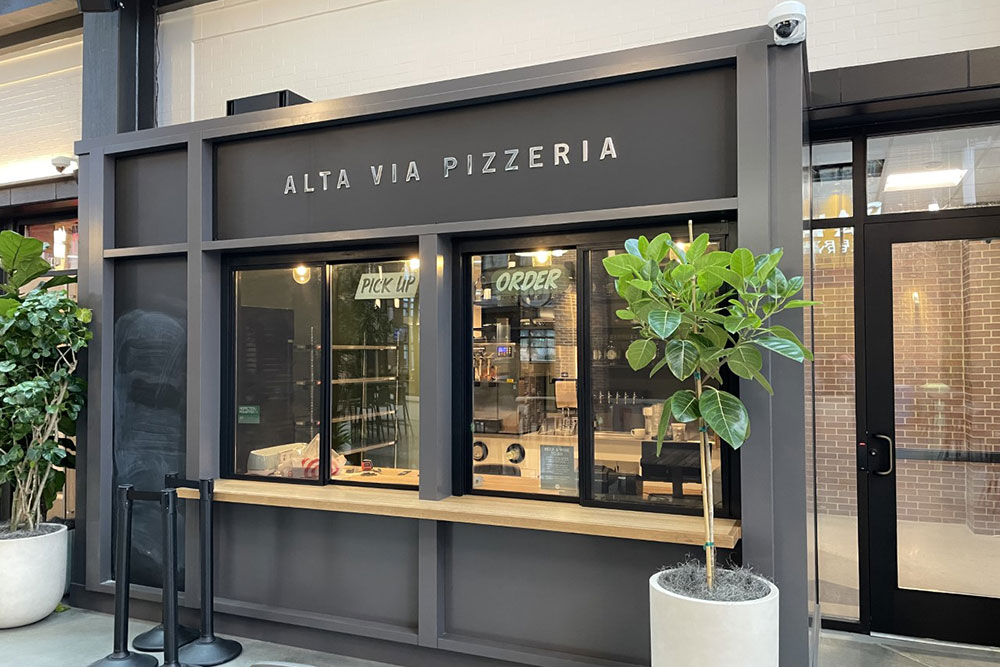 “It’s a full-service restaurant that features pizza,” Fuller says. “We want a place where you can sit down and have pizza, but pair it with a nice salad or some good vegetables and have a glass of wine or a cocktail.”

For guests who don’t want the full-service experience, there’s a kiosk at the front to streamline pickup of takeaway orders, with delivery options expected down the road.

Alta Via Pizzeria will offer a soft launch of a limited menu, carryout only service (pre-order online) through Saturday. Fuller says the restaurant will be closed next week to train front-of-house staff, with the full takeaway menu available on March 7 and indoor service in the restaurant, which has approximately 100 seats indoors and a 40-seat patio in the atrium, to begin “very shortly after that.”