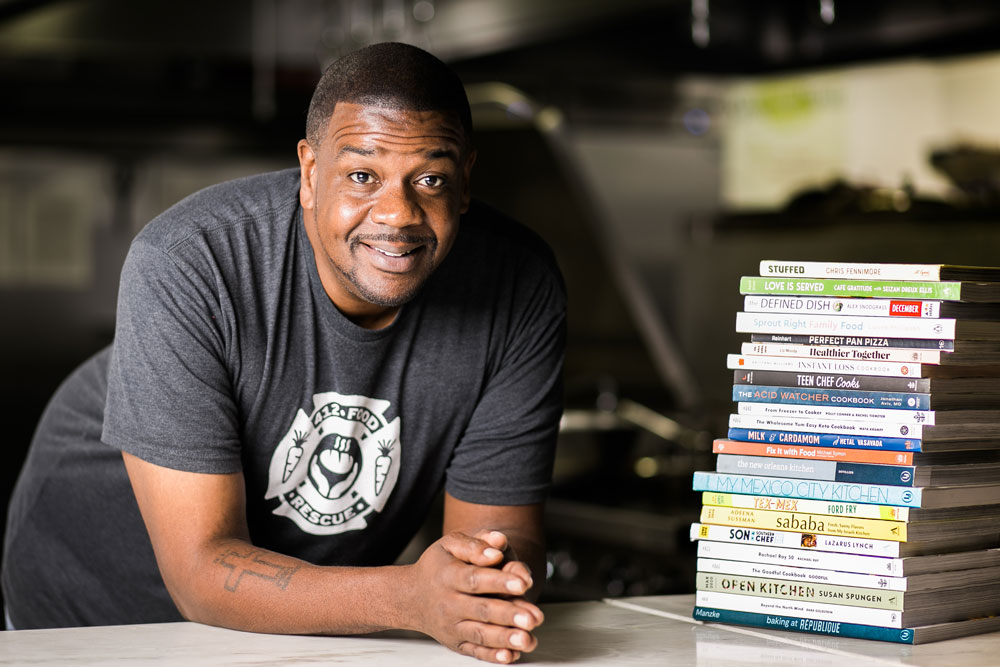 For Edward Anderson, better known to colleagues as Chef Ed, a day on the job is like an episode of the culinary competition show “Iron Chef.” There always is a secret ingredient.

“The thing about this job is that when other chefs create their menus, they send out for ingredients. I create a list of ideas and hope the ingredients I need for them will come in,” he says.

In his role as culinary manager for 412 Food Rescue, Anderson oversees the hunger-relief non-profit’s Good Food Project, which is based in Millvale.

Anderson launched phase one of Good Food Project’s kitchen in June, cooking approximately 30 lunches per week for the Millvale Library summer lunch program. As of October, he was preparing more than 200 hot meals a week in a newly built, well-outfitted kitchen inside New Sun Rising’s Food + Energy Hub and slowly scaling up to 300 for the end of the year. Those meals are prepared and delivered free of charge to 412 Food Rescue’s partner organizations. Additionally, the Red Cross has run practice drills with 412 Food Rescue so that it can have fully cooked, prepared meals ready in an emergency.

Anderson sees his role as spearheading a program that, as it grows, will expand access to healthy food, and dignity, for the region’s food insecure population. “A lot of people don’t know what to do with a fresh head of cabbage or don’t have the time to do it. It’s easier for people if I can make them cabbage rolls or coleslaw or cabbage soup. That’s one less meal they have to think about,” he says. 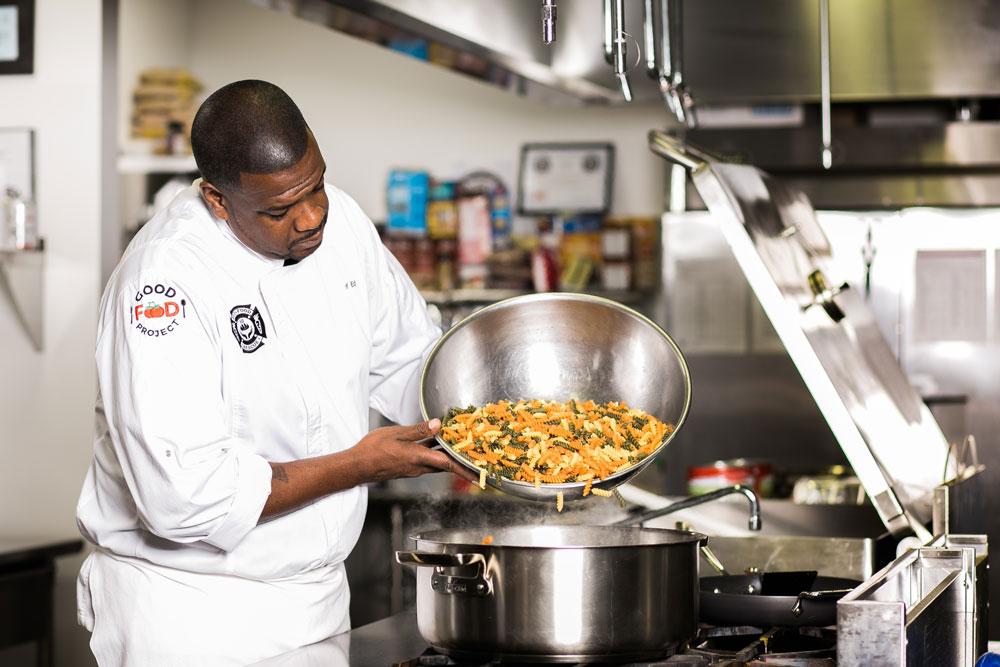 It’s an evolution in logistics for 412 Food Rescue, which until June moved all of its food, which otherwise would have been destined for the compost heap or landfill, as uncooked ingredients to more than 200 non-profit partners such as the Allegheny County Housing Authority, the Housing Authority of the City of Pittsburgh and Community Kitchen Pittsburgh. It’s moved a lot of food, too — the organization has rescued nearly 7.5 million pounds of surplus food since it was founded in 2015.

“Early on with 412 Food Rescue, even before the Food Rescue Hero app [which allows volunteers to immediately connect with establishments that want to donate food] was developed, we would get giant donations of things such as cabbage and tomatoes. As we were trying to place the food, we thought, ‘Wouldn’t it be nice to have a kitchen?’” says Hana Uman, program director, special programs and projects.

In 2017, the organization won a $110,000 grant as an UpPrize finalist, which allowed it to move forward with a plan to turn rescued food into frozen meals that are an inexpensive, healthier alternative to store-bought frozen food options. When the program is fully running, low-income individuals will be able to use their SNAP benefits to purchase the meals.

Food comes from a number of different places such as Sysco, Consumer Fresh Produce and Giant Eagle. “Even if it’s coming from rescued food, it’s still served with dignity. I wouldn’t serve anybody anything I wouldn’t serve my family,” Anderson says.

Family is where Anderson learned the joy and importance of food. His grandmother was a cook in a school cafeteria, as well as an avid home baker, and his mother also was an accomplished home cook. Anderson learned a thing or two from them and cooks at home for his own family, but he found his first professional calling in social services rather than in a restaurant kitchen. What started as an entry-level job at Auberle, a McKeesport rehabilitation facility for at-risk youths, evolved into a 15-year career in which Anderson eventually became a senior counselor and trainer. Later, he worked for Allegheny County Juvenile Probation CISP program and had plans to open a community center or after-school program. 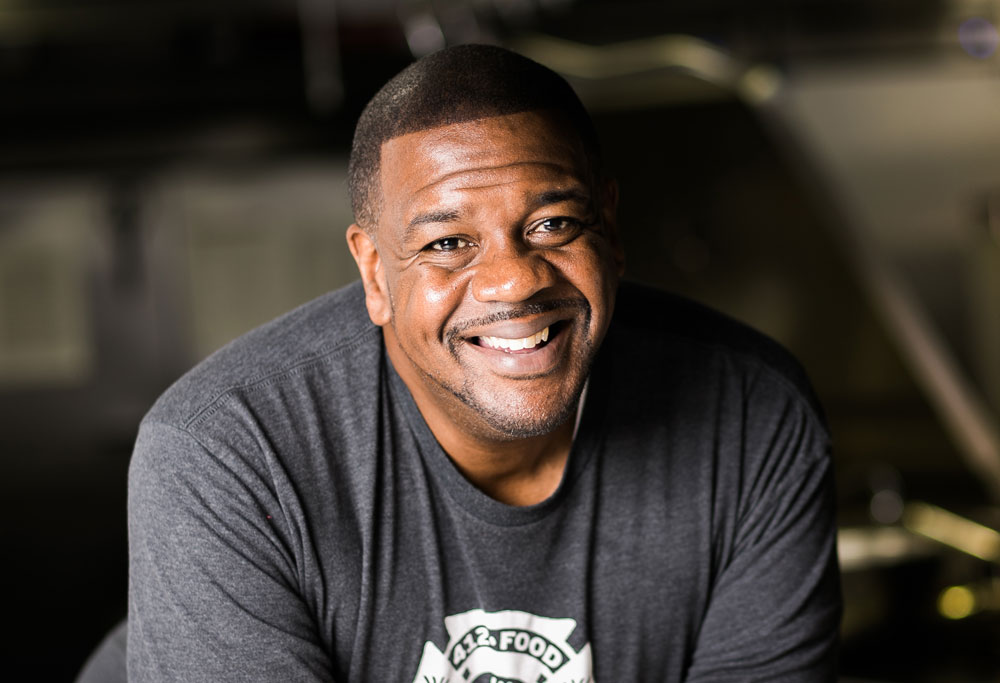 However, feeling a little burnt out with social services work, he thought he might want to return to his culinary roots and open a restaurant. So he enrolled in Bidwell Training Center’s one-year culinary arts program.

Toward the end of the program, he heard 412 Food Rescue was looking for a culinary manager. “I was interested in the social services aspect of it, but I still was thinking of opening my own restaurant,” he says.

A job placement coordinator convinced Anderson that applying for the job was the right move. The 412 Food Rescue team saw the same thing, that the gregarious cook with a background in taking care of people would be the right fit for the new project. Anderson agrees, too. “This is perfect. I still get to develop my own culinary program. I get to keep my social services hat on. Everything fits,” he says.

Every Friday, Anderson sends out a wishlist of ingredients he’d like to use during the following week. “I have to be versatile. I need back-ups just in case I don’t get what I think I’m going to get,” he says.

On Mondays, Anderson knows what he’s going to have — then he starts brainstorming by combing through cookbooks, the internet and his culinary repertoire. Tuesdays are for cooking, often with the help of volunteers, and food is delivered the rest of the week. One week in September, he received a big shipment from Sysco Pittsburgh of chicken legs and thighs, which he braised with peppers and onions, all served over rice.

This article appears in the December 2019 issue of Pittsburgh Magazine.
Categories: Eat + Drink Features, From the Magazine, Hot Reads, PGHeats