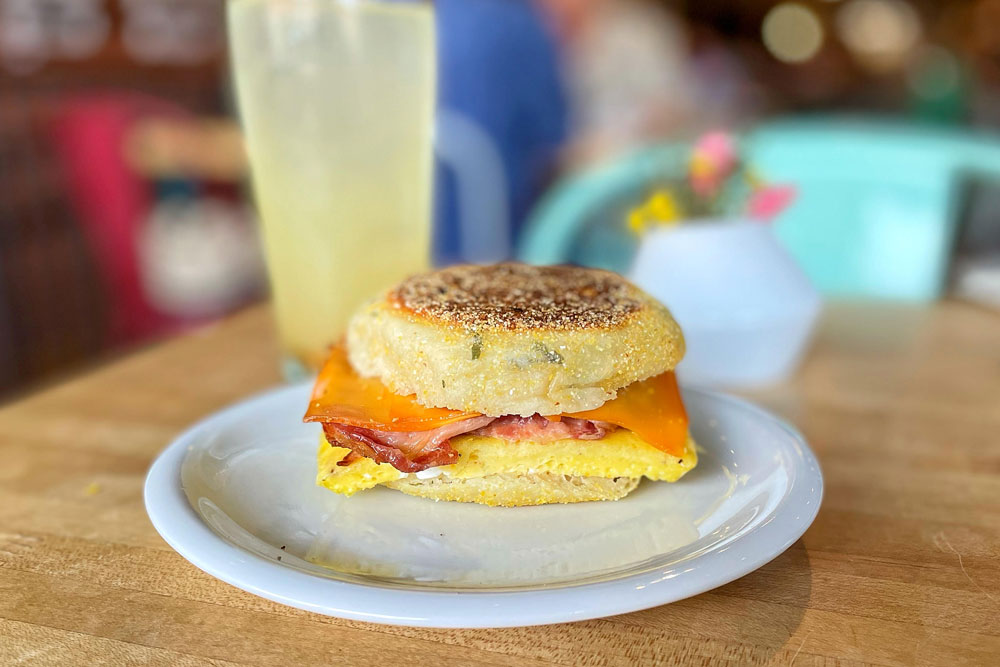 I’m pretty into egg sandwiches right now. It might be that I’m hotly anticipating tomato sandwich season and looking for something to bridge the gap until then. Possibly it’s a dose of nostalgia. Maybe it’s simply because egg sandwiches are fabulous. I hadn’t planned on eating so many egg sandwiches in a fortnight that I’d write an egg sandwich round-up, but there are four that I think you’ll want to get, too.

This isn’t by any means an exhaustive list, though all the sandwiches mentioned would undoubtedly earn a spot on a best breakfast sandwich list if that were ever a thing I’d write.

De Fer Coffee & Tea: The Elegant One
As cliché as it sounds, sometimes the best inventions are the ones that come from necessity. Such is the case for the elegant egg sandwich at De Fer Coffee & Tea. When Matt and Vanessa Marietti opened their chic, comfortable cafe in the former 21st Street Coffee in the Strip in December 2017, and they had to make do with limited kitchen space and equipment when building their slender food menu. “How do we make a good tasting sandwich in a small space and make a lot of them, too? How do we layer texture and umami?” Matt Marietti says about the process.

It’s a good thing they already had an ace in hand, having connected with Richard Levkoy of Willow Bend English Muffins while the Mariettis were nurturing De Fer at farmers markets prior to opening in the Strip (this year, they expanded with new locations at The Highline and The Riviera).

Because they only have small ovens to work with, the eggs, with a bit of shaved Parmesan for added umami, are baked into a neat little square. The De Fer egg sandwich is rounded out with crispy pancetta, smoked cheddar from Troyer Farms, marinated, sun-dried tomatoes from Strip District neighbor Stamoolis Brothers Co. and housemade garlic chili aioli, which bolsters the moisture content and adds a mild spiciness. All of it makes for a crunchy and savory egg sandwich that, along with a cup of skillfully made coffee and a good book, is an excellent way to start the day particularly if you decide to hang for a bit in De Fer’s airy main room. If you’re looking for something on the go, this also is an egg sandwich that, by design, travels well. 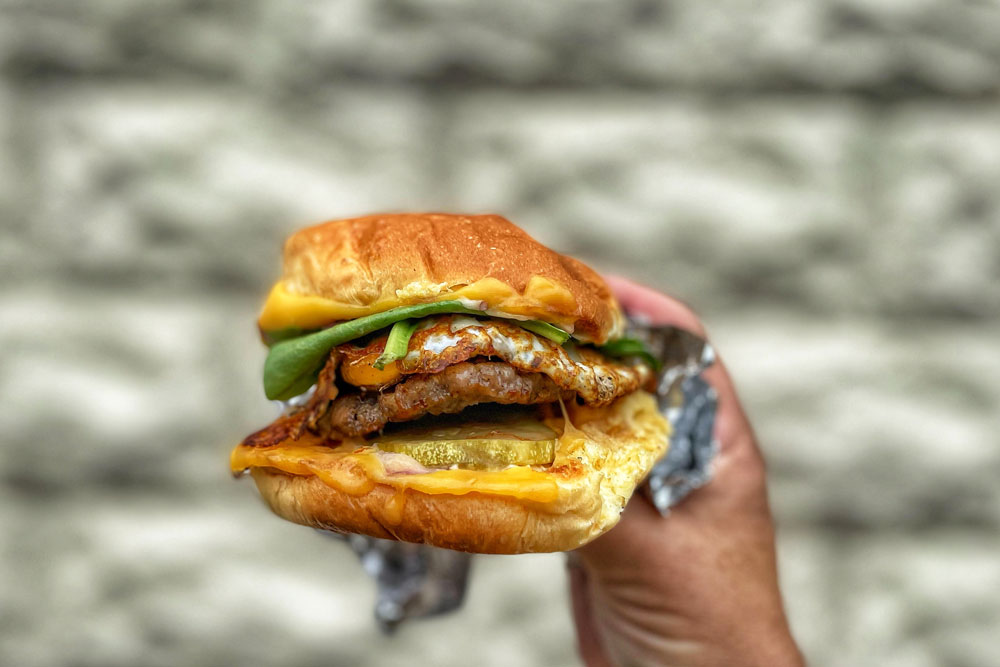 Pear and the Pickle: Have It Your Way
I love the customizability of Pear and the Pickle’s egg sandwich. You can go straightforward with a fried Primrose Farm egg and cheese on a soft buttery Kaiser roll at Alexis Tragos and Bobby Stockard’s Troy Hill gem if you’d like to. But there are so many possibilities of where to take it. There are fundamental questions such as which of the seven cheeses should I pick, and do I want to add bacon or sausage? And in a pre-coffee haze, you might even get deeper: Do pickles belong on a breakfast sandwich? What about avocado? When I had mine the other day, I went with sausage, egg and American cheese accompanied by greens, onions and garlic aioli. Made this way, it’s a substantial sandwich, one that makes for a hearty breakfast and also works as a lunchtime sandwich. The egg was fried hard, which I didn’t mind as it provided a nice textural contrast to the crunch of the greens and onions and the softness of the roll and sausage. It also made the sandwich perfectly portable — the restaurant’s cozy dining room is yet to reopen, but I was able to enjoy eating it while walking around the block and not making too much of a mess of myself. 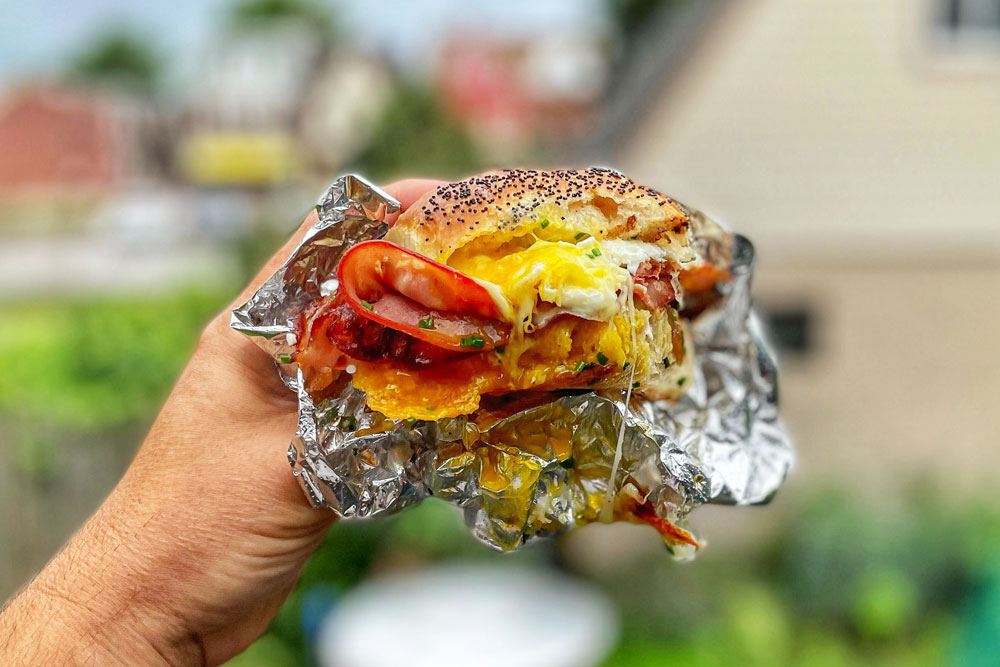 The Thyme Machine: A New Classic
New in town is The Thyme Machine, a spin-off of Bloomfield’s Bitter Ends Luncheonette. Longtime Bitter Ends chef Ryan Chavara is at the helm, and his initial menu of three egg sandwiches has me singing high praises. I tried two of them this week, and both were fabulous (bacon, egg and cheese, as well as what look to be some marvelous pop-tarts will have to wait for another day). As is the case with Bitter Ends, the sandwiches are built with outstanding ingredients, most of which are locally grown, and housemade bread.

I dig the bitter, sweet and just-a-little-spicy balance in Chavara’s broccolini, egg and cheese sandwich, which features roasted broccolini from Bitter Ends Farm Co., deeply caramelized onions, cherry pepper aioli and American cheese. It sure is nice to have a vegetable-packed sandwich for breakfast, too. Likewise, the fried mortadella sandwich hits that sweet intersection of crisp, unctuous and bright, with nicely griddled pistachio mortadella, marinated peppers and provolone. I appreciated Chavara’s egg cookery in both sandwiches, too — just shy of full-dippy, the yolks were loose enough to coat the other components but not so runny as to get all over the place. For now, The Thyme Machine is stationed outside of Bitter Ends on Thursday and Friday mornings and at tina’s on Saturday and Sunday evenings, but be sure to check its Instagram for schedule and menu updates.
instagram.com/thymemachinepgh 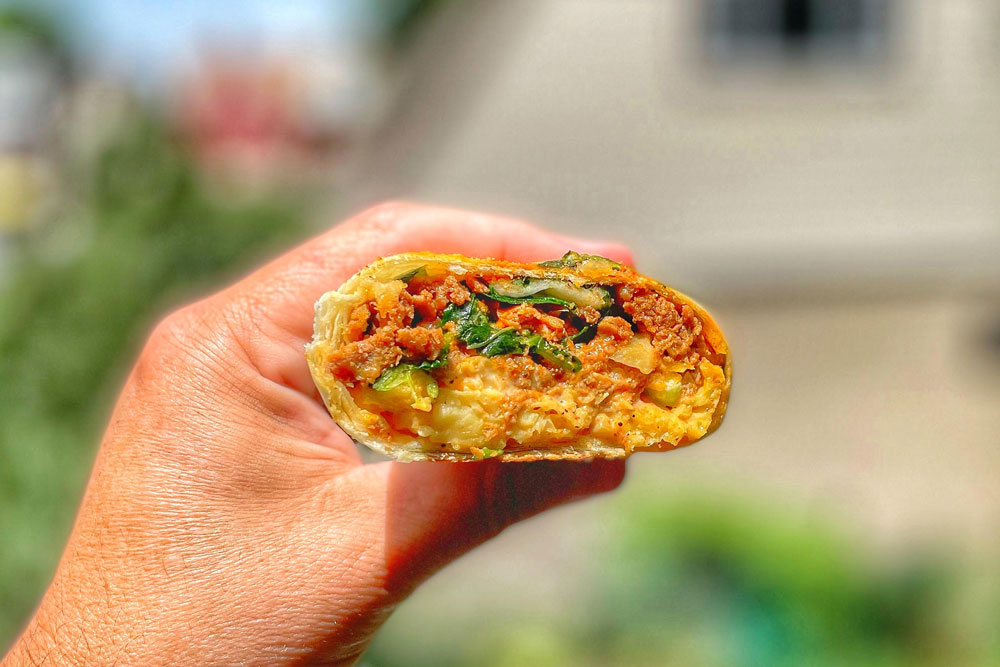 Reed&Co: Vegan to the Max
I crushed a Reed&Co. breakfast wrap a few weeks ago while reporting for my forthcoming story on Pittsburgh’s vegan and vegetarian restaurants. The grab-and-go Lawrenecville eatery’s breakfast sandwich is utterly delicious, and it’s been nudging my heartstrings since I tried it. Here’s what I love about the sandwich: although it eats just like any egg sandwich you might find, it’s entirely plant-based. Reed&Co chef Justin Crimone says that for the third iteration of the establishment’s breakfast sandwich, he aimed to craft a perfectly balanced product that anyone — vegan or not — can enjoy for what it is.

It’ll get into this more in my September issue story, but it’s pretty remarkable how plant-based ingredients such as the ones Crimone uses offer similar flavor and mouthfeel as animal-based ones in applications like his egg sandwich. JUST eggs, made from mung beans, have an equivalent texture to a medium-soft scramble. Crimone blends Impossible Foods beef into a crumbly, chorizo-spiced sausage that adds a lovely richness. Violife cheddar, made with coconut oil, vegetable starches and ground sunflower seeds, melts and tastes nearly like dairy-based Cheddar cheese. Crimome rounds out his wrap with red pepper sauce and pickled onions, and it’s all stuffed in a flour tortilla which is griddled for maximum crunch.
4113 Butler St., Lawrenceville; 412/605-0237, reedandcopgh.com