Look for smörgåsbord delivery and, down the road, a specialty market from the popular pop-up. 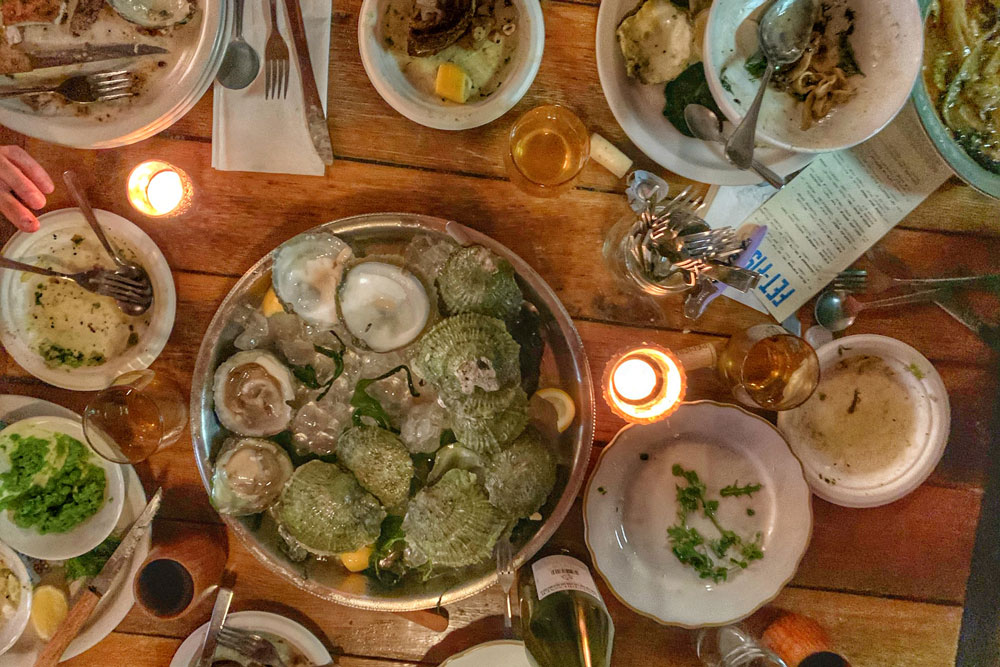 A year ago, Nik Forsberg and Sarah LaPonte were throwing some of Pittsburgh’s most enchanting pop-up dinners in recent memory. Fet Fisk, their Nordic-inspired, Pittsburgh-rooted dinner series sailed through locations such as Black Radish Kitchen and Penn Hebron Garden Club before landing a semi-permanent residency at Pear & Pickle in Troy Hill. They were in the process of looking for a Fet Fisk restaurant location when COVID-19 put a halt to on-premise meals in Pennsylvania. As the pandemic lingered on, plans for an in-person Fet Fisk feast went up in the air.

Forsberg spent the summer growing vegetables on a 10,000 square foot city lot. LaPonte moved to Greensboro, N.C., to pursue a Masters of Fine Art. They also collaborated on a cookbook-magazine hybrid chronicling the first year of Fet Fisk. “We’re not doing dinners any time soon,” says Forsberg. “For a while, I was of the mind that I didn’t want to do anything at all. I like being in the same room with people while I’m cooking. I like the interaction that happens at Fet Fisk. Would it devalue the brand if we’re packaging things to go? That’s not really us.”

However, when an opportunity arose for Forsberg to take over an existing commercial kitchen space on Mount Royal Boulevard in Shaler, the ideas started rolling. “I feel like there’s some good opportunity for jokes, like, ‘Ahoy, Shaler!’” he says.

Happily, for Fet Fisk fans — count me among them — Forsberg has more than a series of nautical-themed puns in mind for the space he’s calling Fet-Fisk: Royal Market.

Forsberg’s long-term vision is to transform the space into a thoughtfully stocked seafood, meat and specialty ingredients market. But he’s not rushing into that. “We’ll implement this all very slowly, so we have the time to hammer out the logistics and get it right. Start small and take baby steps. That’s what we’ve done this whole time, and it’s worked out for us,” he says.

Forsberg says the market will roll out in phases, beginning with a weekly smörgåsbord. The meal will include a neatly packaged repast of charcuterie, spreads, pickles, vegetables from Forsberg’s garden, and bread baked by Saturn Bakery owner Jack Miller (he is sharing the Shaler space). Forsberg says one of the highlights of the initial offering is that it will be available for direct delivery to Pittsburghers.

“There’s a market for getting food brought to your house. And a lot of times if you order from a big company like Amazon or GrubHub, that food isn’t very good, and there’s a huge service charge. I’d like to try to insert ourselves into that market right now,” he says.

The likely next step is the introduction of pantry items such as housemade salad dressings, sauces, compound butters, spice mixes and pickles, and, at some point, hot family-style meals. “It’ll be carefully curated. We’ll see what people respond to and take it from there,” he says.

Forsberg says he plans on operating on a pre-order only model, which will allow him to better source products while keeping a lower overhead because of less waste. It’ll allow him to offer things that are hard to find in Pittsburgh — fresh, sustainably raised seafood and unfrozen local meat, including less popular animals such as rabbits. As it all comes together, it’ll mean a varied choice of high-quality options for customers. “If you want ready-to-eat stuff, we can do that. If you want to spruce up your meals during the week, that’s cool. If you want to get together with your pod and cook a rack of lamb or a nice dry-aged steak, we’re going to have that, too,” Forsberg says.

Look for Fet-Fisk: Royal Market to open sometime in September. His long-term goal, he says, is still to open a Fet Fisk restaurant.