Feel The Groove, and Fill Your Belly, at Fet Fisk 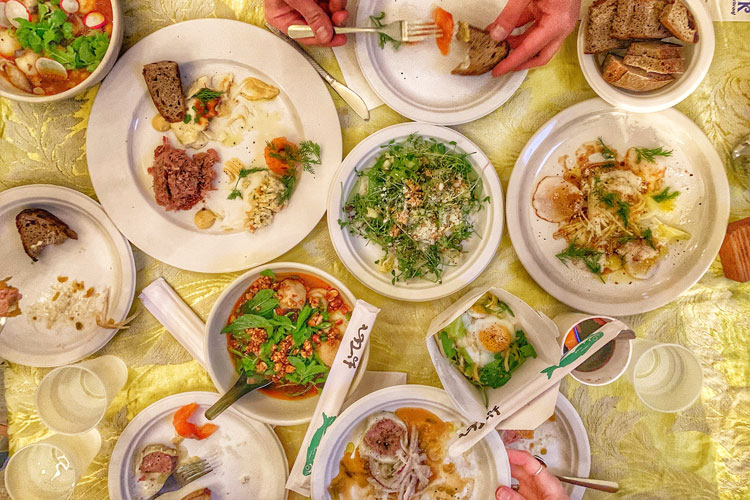 Not since Apteka forerunner Pierogi Night has a recurring pop-up caught my attention quite like Fet Fisk has. The bi-weekly, Scandinavian-inspired feast from Nik Forsberg, Sarah LaPonte and a crew of their restaurant-industry friends has since January served as a transportive and often-delicious escape from the doldrums of Pittsburgh’s gray winter.

“We really like good food, but none of us have a lot of money. So wanted to create a place where you could go for a nice meal, have a good time and not spend a ton of money,” LaPonte says.

Forsberg runs the kitchen. He moved to Pittsburgh two years ago from North Carolina, where he was a chef at The Bull and Beggar in Asheville. In Pittsburgh, he’s worked in the kitchens of B52, Whitfield, Dish and Apteka, but he says he never quite found what he was looking for at those restaurants. “I'm a little disillusioned. So I wanted to do it myself,” he says.

Forsberg says that he and LaPonte found inspiration for Fet Fisk on a road trip to North Carolina, and also from a conversation with a colleague from B52 who half-joked about opening a winter pop-up called “Soupsters” at Twisters in Bloomfield (the popular soft-serve spot is closed in the winter). Between that and Forsberg’s desire to offer a dining experience built around fresh, affordable seafood, Fet Fisk was off and running.

The menu changes with every Fet Fisk. Expect to find freshly shucked oysters, a smörgåsbord plate with gravlax, pork rillette, pate and pickles, as well as house-made bread, soups, smoked fish and vegetables from Tiny Seed Farm, where both Forsberg and LaPonte work during the growing season. Most dishes have a foothold in Nordic culinary tradition, but Forsberg isn’t afraid to stray from the fold with a recipe such as a Thai-inspired fish-ball soup laced with fermented chili paste, spices and fresh herbs. "It's not trying to be authentic in any sense. But the theme seems to work,” he says.

Fet Fisk — which loosely translates to “fat (or oily) fish” — will launch its sixth iteration on Monday. The weeks between the events, Forsberg posts a handful of whimsical, Nordic-ish-meets-stream-of-consciousness-poetry Instagram posts teasing what’s to come (Instagram direct messages are also how they take reservations, which are required). “Sometimes I get a little carried away,” he says.

The idea of fun, casual, communal dining is an essential element to Fet Fisk. For each evening, LaPonte transforms the host space with long communal tables, dried flowers and herbs, twinkle lights and candles. “The aesthetics change with the space. We want it to feel like a party because you’re a bit packed in and so you’ll interact with everyone,” she says.

I like the creative energy coming from a crew of people who genuinely seem to dig working together. While that’s helpful, but not necessary, for restaurant dining, it to me is an essential part of the transformative experience of a recurring pop-up series such as this one. “That kind of thing translates even if you won't come away from a meal thinking about it — it's still in your subconscious. In situations where everyone is super-tight, like you're family, when everyone is passionate about what they're doing and helps each other out, that translates to the guest,” Forsberg says.

There’s a fine line between authentically hip and forced-cool, and Fet Fisk plants itself on the side of a vibe that works. And while it might be for everyone — the hip, DIY ethos doesn’t resonate in all circles — it does for me. Forsberg and LaPonte originally had planned on Fet Fisk being a winter thing, but due to its popularity it will continue through spring and perhaps summer. Information about upcoming Fet Fisks, including a special April Fools Day event, are found on its Instagram page.