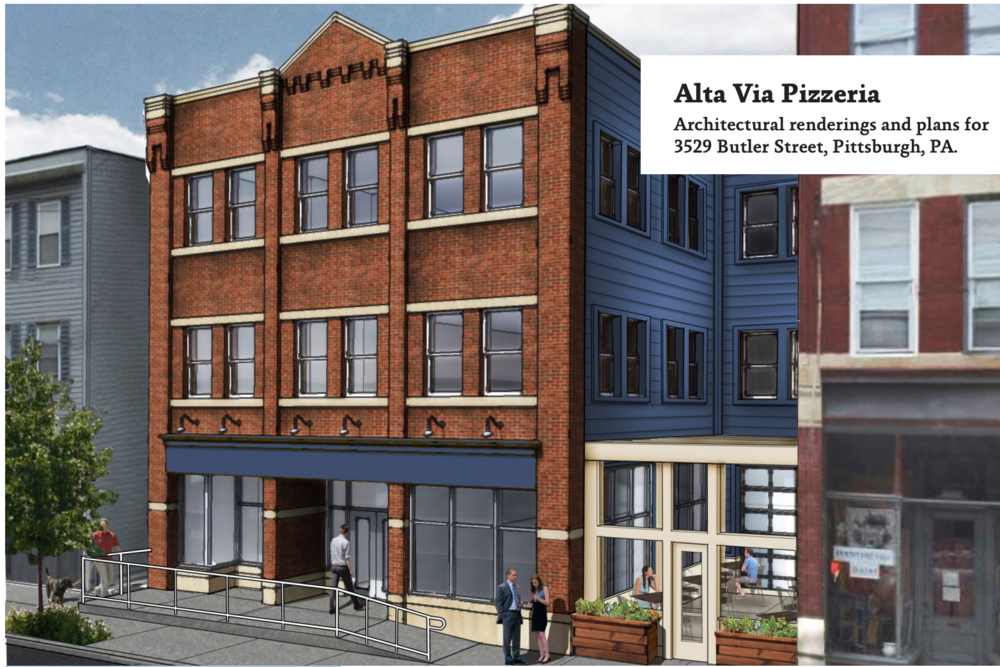 Details about the new big Burrito Restaurant Group concept in Lower Lawrenceville are beginning to trickle out following a community presentation to Lawrenceville United and Lawrenceville Corporation. A .pdf was posted online detailing a concept called “Alta Via Pizzeria.”

The restaurant group, which operates Eleven Contemporary Kitchen, Alta Via, Mad Mex, Casbah, Soba and umi, is going to open a pizza-focused restaurant. The specifics of the restaurant, which is expected to open in September or October, are still being nailed down. “It’s going to be fun and casual. It’s good food that’s affordable in a fun environment. We want to have that all-day fun that Mad Mex has, but with a different kind of food,” says Bill Fuller, big Burrito corporate chef and president.

Fuller says that the basic ideas circulating about the restaurant are correct, but the details, including the name of the restaurant, are still being ironed out. “It’s a menu that was built just as a structure. These aren’t specific menu items,” he says.

The restaurant will indeed be pizza-focused, with at least two styles cooked in new Pizza Master electric ovens, which can heat up to 900 degrees. Fuller says they are developing a pan pizza that isn’t quite Roman-style and isn’t quite Detroit-style and a 14- or 16-inch round pizza. Both pies will begin with a multi-day fermentation of the dough, and the pizza will be available for dine-in, takeout and delivery.

Fuller says that he and his culinary team started playing around with pizza while they were building the menu at Alta Via but that it was never intended for the menu at that restaurant.

The Lawrenceville menu will be rounded out with salads, vegetable-forward dishes, hamburgers, sandwiches and more. Fuller says the establishment will have a full bar and a wine list with a focus on selections from California and Italy. The restaurant will be open for lunch and dinner service.

As for opening a restaurant that centers around pizza in a neighborhood already abuzz with pizza options, including being in roll-a-bowling-ball distance from the outstanding Driftwood Oven, Fuller says the market is far from saturated. “It’s a different kind of restaurant. Just because there is pizza here and pizza there doesn’t mean that we can’t fill two different sides of the market,” he says.