By employing its technology to power efforts such as Downtown Community Takeout, the organization is serving as an essential cog in the wheel of many programs. 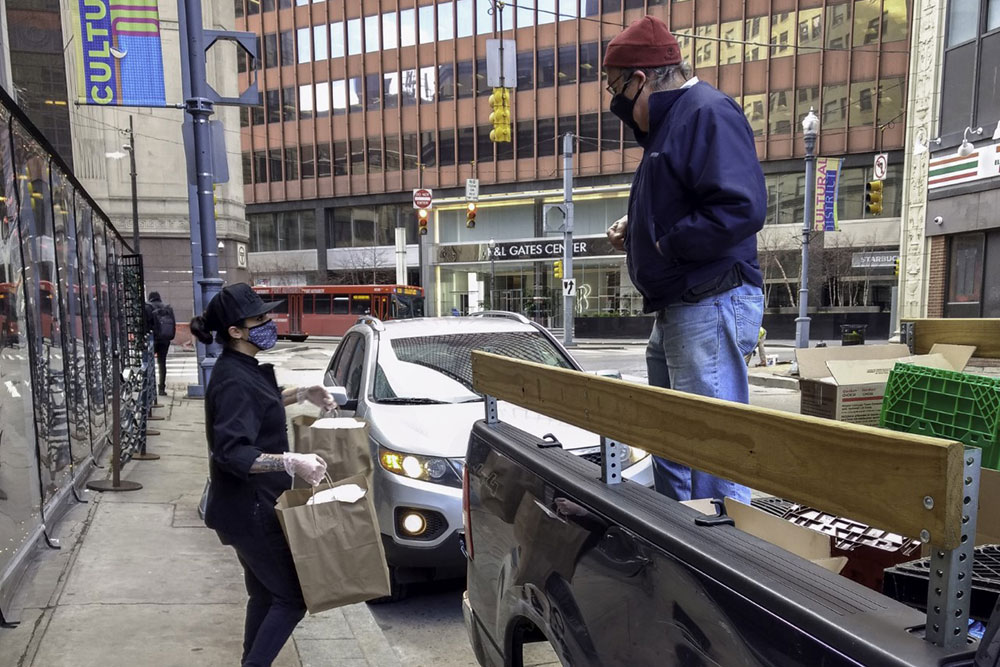 412 Food Rescue is best known for moving surplus food that would have otherwise gone to waste into the kitchens of people who can use it. It’s an extraordinary effort that has impacted the lives of tens of thousands of people throughout the region since the nonprofit launched in March 2015. 412 Food Rescue’s most recent impact report notes that the organization worked with 744 donors to rescue and distribute 7,941,689 pounds of food from January to November 2020.

412 Co-founder and CEO Leah Lizarondo believes that the underlying reason for the nonprofit’s success is the technology it has developed to administer its goals, including its innovative 412 Food Rescue Hero app. “We are a logistics organization. The one thing we are really good at is getting food from one place to another,” she says.

To that end, 412 Food Rescue has become the cog in the wheel of a substantial number of efforts to ensure that food gets to the homes of those who need food throughout the COVID-19 crisis. Often, the programs it is involved with also support the region’s struggling hospitality industry. 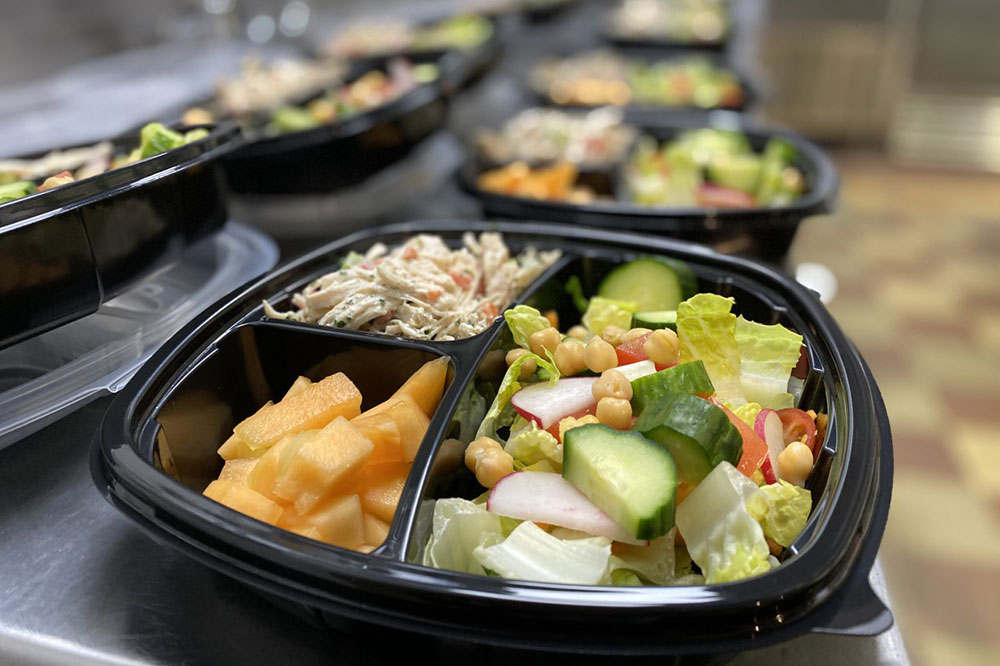 A newer pandemic era program is Downtown Community Takeout, a partnership between 412 Food Rescue and Pittsburgh Downtown Partnership, which is funded primarily by a grant from the Richard King Mellon Foundation, though it also welcomes the support of individual donors. It’s a perfect example of how 412 Food Rescue has adapted to the needs of the moment.

The program began with a pilot program called Community Takeout last May, with eight restaurants throughout the city participating. The short-term intention was to help both restaurants and food-insecure people, many of whom were experiencing food insecurity for the first time, weather the initial storm of what was then called the Red phase.

As the pandemic stretched on, 412 Food Rescue and its partners looked for a way to continue to support restaurants while fulfilling their mission of alleviating hunger. Downtown made sense as a focal point as its restaurants have been hit particularly hard as the number of daytime office workers, evening leisure visitors, business travelers and convention-goers continues to be a minuscule fraction of what it was prior to the pandemic. 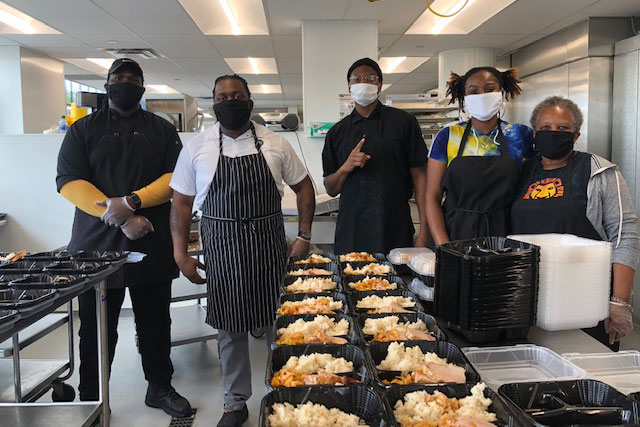 “Downtown Community Takeout is something I’m really excited about. We’ve had these restaurants that have supported us all these years, and now we were in a position to do the same for them while still fulfilling our mission of feeding people,” says Lizarondo.

Pittsburgh Downtown Partnership is responsible for contracting with the restaurants, and the funds offered cover meal costs, overhead and employees’ salaries. Bae Bae’s Kitchen, Las Velas Mexican Restaurant, Arepitas, The Speckled Egg and Proper Brick Oven & Tap Room are among the 18 participating restaurants. 412 Food Rescue volunteers can sign up to deliver the meal via the organization’s app — currently, approximately 3,000 meals are being provided each week — and volunteers can choose to set up a regular delivery route.

Meals are delivered to 412 Food Rescue’s nonprofit partners; currently, the majority of the meals go to Housing Authority of the City of Pittsburgh and Allegheny County Housing Authority sites. The restaurants can choose what they want to prepare, as long as the meals include a protein, starch and vegetable. “The meals must be wholesome and substantial enough to sustain an adult. Meals have ranged from pad thai, to grilled chicken with rice and veggies, to enchiladas. We encourage the participating restaurants to mix up their offerings if possible. We also make sure that at least one of our restaurants is preparing halal meals,” partner experience manager David Neimanis says in an email.

Downtown Community Takeout is the latest in a series of efforts by 412 Food Rescue to serve as an essential bridge for Pittsburghers experiencing food insecurity during the COVID-19 pandemic. 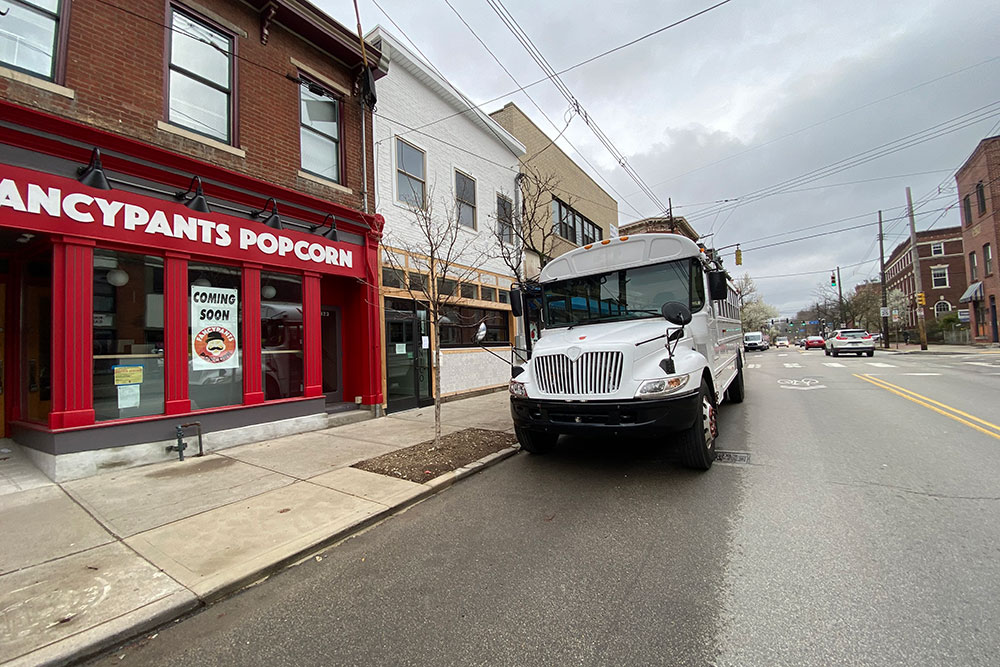 Its Farmers-to-Families program offered 36 food distributions in six counties, distributing 4.5 million pounds of fresh produce, dairy and groceries from May to October. And special programs such as Mom’s Night Off, a collaboration with Single Mom Defined, EAT Initiative and Women and Girl’s Foundation, delivered meals to 100 single mothers between Dec. 19 and 26.

Its most recent partnership is with Allegheny Eats, an organization dedicated to supporting Pittsburgh restaurants and regional farmers and food producers; once again, 412 Food Rescue will provide the people-power to deliver the meals to participants.

“For many of us, we don’t think about how easy it is that we can have things delivered. We forget how important convenience is as part of a social service, too. We can make sure that not only is the food people need available, but also that the people who need it can get it,” says Lizarondo.