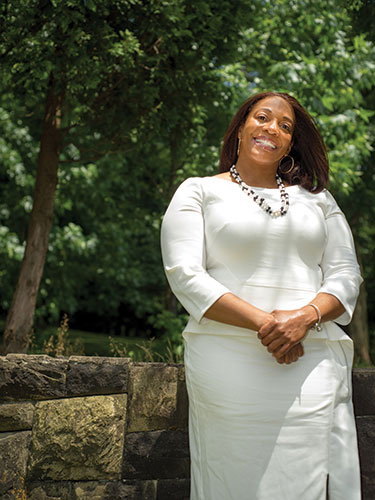 Shortly after earning a degree at the University of Pittsburgh, Germany joined the Pittsburgh Housing Authority’s development division. There she was responsible for relocating residents of a senior citizen high rise in the East Hills that was slated for demolition into a new housing development in Homewood. “The goal is to create an environment where everyone can be a winner.”

It didn’t take long for a private Boston-based developer working with the Housing Authority to recruit Germany. For three years, Germany worked on everything from budgets and financing to engineering and construction. Then she read an article about a Columbus-based company called KBK Enterprises that had won a $60 million contract to redevelop public housing in Garfield. The president, Keith B. Key, was establishing a Pittsburgh office. “I had never seen an African-American developer before. I called him. I was his first hire in Pittsburgh.” Germany started as an assistant project manager in 2006, and has grown a one-woman office into one with more than 40 staff members — most of whom are minorities and/or women. Today she is a vice president at one of the largest minority development firms in the country with a role that spans development, operations, strategic planning and leadership/mentorship and government relations. Germany, 45, has been involved in more than $500 million in housing and commercial development.

“I work with the community, public organizations, elected officials and financial institutions to create housing and economic development opportunities for communities all over the country,” Germany said. KBK has been in the news recently as it is part of a team hired to develop housing at the Civic Arena site.

Germany has been a member of the Pressley Ridge board since 2013, currently serving as the first vice president on the governing board. There she visited the facilities for autistic and deaf children. “I knew that I could use my experience to provide a better environment for our students.” A $10 million state-of-the-art facility was completed in 2019.