Hedge is a senior trial attorney at the Office of General Counsel at the U.S. Dept. of Veterans Affairs. 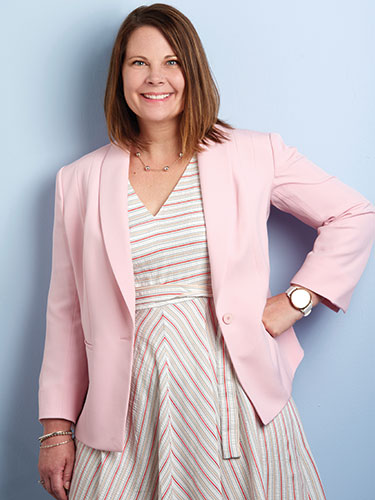 Jennifer Hedge grew up in New Richmond, Ohio, just outside Cincinnati. After earning a bachelor’s degree in international business, she took a job at a hospital network where she gained experience in the human resources and supply chain departments, among others. After nine years, she pursued her dream of becoming a lawyer, starting law school part time. Even then, Hedge knew she didn’t want a law career that focused on billable hours; she wanted a mission built around helping people. A fellowship sent her to Washington DC for a summer where she worked with the federal government. It was a fit.

Today, Hedge is a senior trial attorney at the Office of General Counsel at the U.S. Dept. of Veterans Affairs. Like other large law firms, the OGC is organized by subspecialties such as malpractice and personnel. Hedge specializes in procurement law as part of a team who support those who sign contracts on behalf of the federal government. “The VA is involved in thousands of purchases each year — from pens to pacemakers to parking garages — in order to serve our veterans,” Hedge said. “When things go sideways, and litigation is imminent or has commenced, my job is to resolve the issue.” At its core, the VA exists to serve veterans. “We care for those who were willing to give everything for our country.”

What is the best advice Hedge has ever received? “Change your view of ‘win.’ I used to think of ‘win’ as a judge deciding in our favor.” Now Hedge understands that settling a case may bring greater rewards to her client than a judge’s decision. Hedge sees this play out in her personal life as well. “When I get my toddler out the door on time without tears – even though he’s wearing two different shoes he put on himself – that’s a win.”

The hardest and most rewarding part of Hedge’s life? Being a foster parent. “As a foster parent, my husband and I are given this incredible opportunity to walk alongside a child who — through no fault of his/her own — is not safe at home. We provide love, support, and the safety the child needs at that time.” Hedge interviewed several agencies before selecting Pressley Ridge and recommends potential foster parents do their research to find the right organization for their family. “Foster care is a rollercoaster ride of emotions and a complete faith walk with God,” Hedge said.