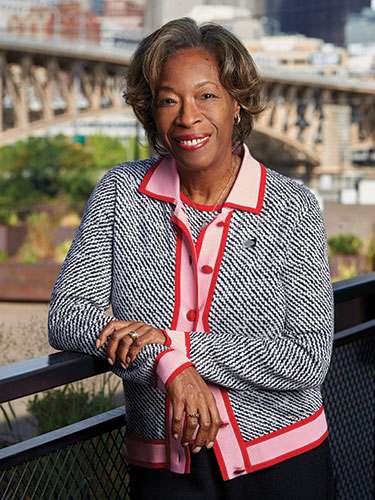 In 1977, when Doris Carson Williams returned to Pittsburgh after a 12-year absence, things had changed in her hometown. “It was an exciting time for me and for Pittsburgh.” Williams met philanthropist Elsie Hillman, who encouraged her to run for public office. A campaign for City Council failed — but succeeded in propelling her career.

Williams’ work for an IT company that helped financial institutions with tech conversions led her to a position at Dollar Bank, where she worked for 11 years in operations, planning and small business development. While there she graduated from the Graduate School of Banking and Finance at Fairfield University.

Next she joined the Office of Business Enterprises at Carnegie Museums of Pittsburgh where she helped to create revenue streams with new developments such as the Carnegie Science Center. After 12 years at the museum, she started to get calls from Robert Agbede, a successful entrepreneur who was convinced Williams was the right person to create a chamber of commerce for African Americans in Pittsburgh. Williams resisted at first but eventually embraced Agbede’s vision,

Williams opened the African American Chamber of Commerce in October 1998 with 28 paid members (and Agbede as chairman). “We are now the 9th largest chamber in the 10-county region,” she said. The African American Chamber of Commerce is a full-service chamber that advocates for minority and small business owners throughout Western Pennsylvania—in good times and bad. Since the pandemic started in March, 25 new companies have joined the chamber, Williams said.

Notably, Williams was featured in Elsie Hillman’s book “Never a Spectator” and was called for a reference when Pittsburgh executive Paul O’Neill was nominated to be the U.S. Secretary of the Treasury.

What is the best advice she’s ever received? “Never give up on your goal; keep the faith and move forward.”