Christine and Brigette are co-owners of ArgyleStudio. 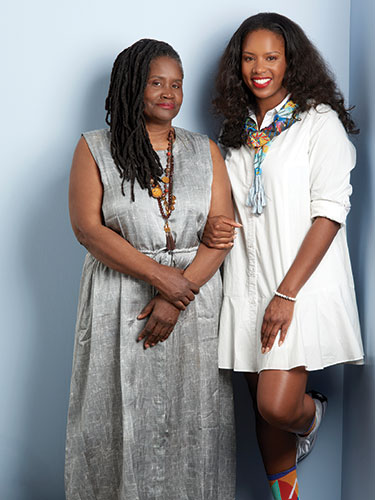 In May, a shop called ArgyleStudio “popped up” on Forbes Avenue in Oakland. It’s just the latest venture for the high-energy mother-daughter team of Brigette M. Bethea and her mother and business partner, Christine McCray Bethea. ArgyleStudio carries a curated selection of handmade goods and one-of-a-kind wares created or resourced by local artists, makers and entrepreneurs. Brigette and Christine selected the artists and makers based on an application process with priority given to local, independent artists and makers that may not have a brick-and-mortar presence. More than half of the vendors are people of color, and the shop also features multi-generational, multidisciplined artists and representation from the LGBTQ community.

Leading and managing projects is nothing new to this pair. Brigette earned a Bronze Star during her military career, among other honors, and founded a leadership development firm in 2015. Christine, who is a mixed media artist, has been a leader in arts administration for more than 20 years.

After leaving the military, Brigette began studying for her master’s degree at Georgetown University. Her master’s thesis was on the topic of leadership, and she spent time traveling back to her hometown of Pittsburgh for research. In 2015, the thesis evolved into a business plan for ULEADx, a leadership development firm. “I knew very quickly I wanted to reconnect to Pittsburgh and help others discover their leadership potential,” Brigette said. ULEADx landed its first contract in 2018, to create a leadership academy for more than 500 members of a national student organization.

It wasn’t long before Brigette decided to enlist her mother, Christine, to help grow the business. Contracts followed with East Liberty Development Inc., The Nyamwange Foundation in New Jersey, University of Pittsburgh’s Center for Urban Education and Graduate School of Public and International Affairs, Propel Schools Foundation, FAME Academy, The Pittsburgh Promise, and others. ULEADx offers a variety of services to help its clients reach their goals. “Our experience helps us to listen, leverage and lead projects from the planning stage to fruition,” said Brigette. Services include training and programming, community relations engagement coordination, facilitation, creative strategy and general consulting.

“I couldn’t think of anyone I’d rather work with than my own daughter,” said Christine, who has won awards for the facilitation of business and arts collaborations from the Pittsburgh Technology Council, among others. She currently serves on the board of Contemporary Craft and as president of Women of Vision Inc. Her Geek Arts/Green Innovators Festival, Pittsburgh’s first eco, art and tech fest, lasted 10 years as an annual event and attracted some of the city’s best emerging projects and programs at the time.

For several years, Brigette worked a full-time job while growing ULEADx on the side. Last year, Brigette was laid off due to COVID cutbacks and decided to “lean in” and focus on the business full-time. “I most enjoy seeing the little lightbulb pop over someone’s head when they begin to discover their purpose and potential.”

The opportunity to open ArgyleStudio was a lightbulb moment, too. Considered a pop-up pilot project, ArgyleStudio is part of a strategy aimed at building wealth by improving ownership opportunities for disenfranchised entrepreneurs through increased connection and exposure in Oakland. “It is critical for the Black community to have ownership in business. Prosperity strengthens the community,” said Brigette. “I see my work as an act of Social Justice in supporting the idea of equity through excellence.” Argyle’s project partners include ULEADx, Oakland BID, UPMC, Pittsburgh Innovation District, Allegheny County Community Infrastructure & Tourism Fund, City of Pittsburgh, and the Urban Redevelopment Authority.

Why Oakland? As one of the region’s economic engines, Oakland is the hub of the Pittsburgh Innovation District with almost $4 billion in new real estate projects underway. But retail storefronts are dominated by food and convenience establishments, which don’t tend to serve Oakland’s residential, employee and destination visitor populations and the growing startup tech office scene. Further, according to project partners, more than 60 percent of Central Oakland storefronts were temporarily shut down and for those that remained open, revenue losses ranged from 50 percent to 80 percent, forcing business owners to cut staff and reduce hours of operation. The impact has been even more devastating for communities of color, according to project partners.

Christine and Brigette are up to the challenge. “I will forever have a military mindset,” Brigette said. “I believe that people and mission always come first. I am decisive when it matters and delegate when necessary. I believe in building other leaders and passing knowledge. I am learning that as an entrepreneur there is no cap to what I can be or do.”

The mother-and-daughter team offer different kinds of advice for women in business. Christine advises: “Fear nothing. Time is more on your side than you think.” And Brigette shares the following: “Learn the business side of your business, and never neglect your profits by solely focusing on your passion.”