Some restaurants require the booster shot while others do not, further blurring the line of what it means to be fully vaccinated against COVID-19. 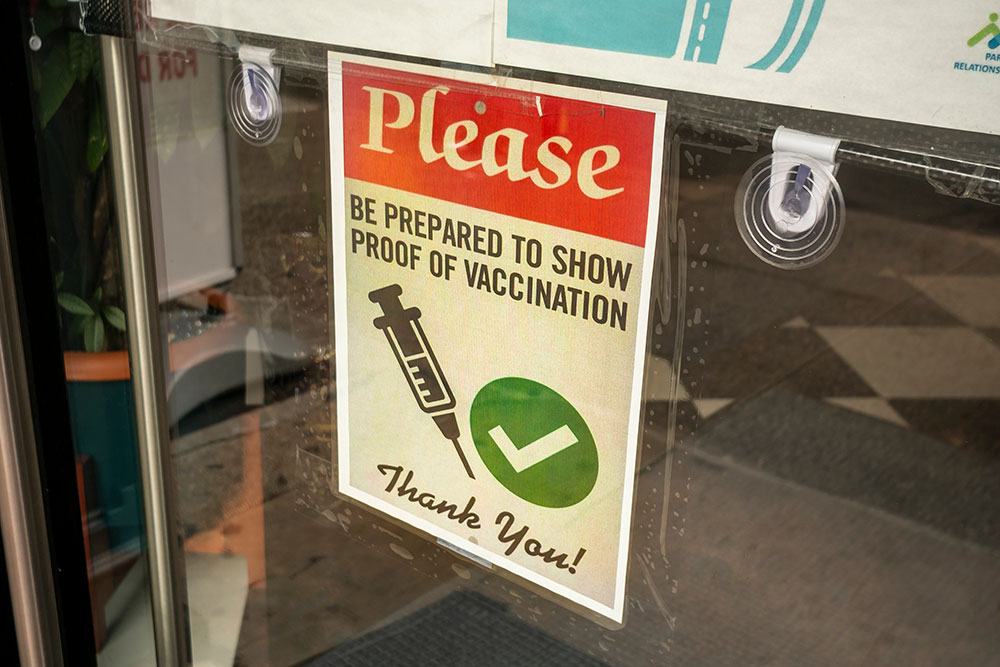 As the recent surge in COVID-19 cases continues, some local eateries are taking extra steps to keep patrons and staff as safe as possible.

A number of local restaurants have announced that anyone hoping to eat there will have to show proof of vaccination.

Hidden Harbor in Squirrel Hill, a tiki bar with Polynesian-inspired cocktails and snacks, announced the policy on Dec. 28, after a week of transitioning to takeout-only because of positive cases among the staff.

“After extensive testing and even more extensive consideration, we are carefully reopening for service this evening at Hidden Harbor, with one important caveat: beginning tonight, we will now require proof of vaccination AND booster shot for indoor seating (exception: guests who have received their second dose only within the past six months),” reads the Dec. 28 announcement, posted to Instagram.

Unvaccinated guests are not allowed to dine inside, but are still able to eat outdoors on the restaurant’s heated, covered patio.

“This change to our vaccine policy is not one we take lightly, but we are convinced that it is the best way to mitigate risk during the omicron surge, which is creating pandemic highs both in Allegheny County and Pennsylvania as a whole,” the announcement continues. “As we now require the booster of our staff, we believe it is only fair and prudent to also require it of the general public.”

The Independent also announced on Dec. 28 that proof of full vaccination — including booster doses — will be required for indoor dining.

According to Peter Kurzweg, co-owner of the Independent Brewing Company and its sister restaurants, the decision was made with both public health and some semblance of normalcy in mind.

“This is the only path out of this hell — to create a community that is vaccinated to the fullest extent possible,” he says, adding that mask mandates in a restaurant aren’t necessarily effective alone because of how often people have to remove them to eat and drink.

“Arguably as a society, we have pushed the individual protection of vaccines and we’ve made the case to people in America that they need to get vaccinated to protect themselves, but the real point of getting vaccinated is to protect other people,” he says. “There are times you have a social obligation to protect others in your society.”

These decisions have been met with mixed reactions. To vaccinate or not to vaccinate? Many Pittsburgh restaurants are caught up in the crossfire of overtly politicized arguments both for and against getting the jab.

One Instagram user commented, “I won’t be returning,” on the Independent’s post announcing the policy, while another wrote, “From a health care worker: thank you for being concerned about everyone’s health and safety, and not just the money.”

Another user praised Hidden Harbor’s decision on Instagram, writing that they feel less anxious knowing some restaurants are maximizing safety.

“I am really glad, and have been anxious the past few days with cases in the country. But all of your actions through the pandemic have been sound and maximizing safety the best you can for both staff and customers! 100000% have been supporting you and feel much better about coming in for our reservation tonight,” the user wrote.

Kurzweg says his restaurants have received many 1-star reviews as a result of the vaccine mandate, filled with angry voices calling him a “segregationist” for only allowing the unvaccinated to dine on the heated patio outdoors rather than inside. Some people, he says, have gone as far as to say the restaurant is treating them “like dogs” for making them stay outside. None of the reviews addressed the quality of service, food or drinks, only the requirement that guests have received all their jabs.

“I’ve been called a Nazi, and recently we had a post accusing us of genocide,” he says.

Hidden Harbor also posted the announcement of its mandate on Facebook, and one user responded with, “I guess Nazis are alive and well in Pittsburgh,” seemingly addressing the anti-vax movement’s talking point that requiring vaccinations is a crime against free speech and bodily autonomy.

But Kurzweg points out a contradiction: For ages, restaurants have been carding individuals under the age of 21 and restricting their access to certain parts of the facility, like the bar. And the reception hasn’t been all bad.

“For every crazy person out there … there are five incredibly grateful people who just want to get back to normal,” he says.

As for the people who have been the most vocal about opposing the mandate, Kurzweg says they’re still welcome to dine outdoors, or are welcome to pick a different restaurant for their night out.

“You don’t have to be here if you don’t want to, but we’re creating a community that is taking each other’s safety seriously,” he adds. “That’s what any good bar or restaurant would do.”

Similarly, Siempre Algo on the North Side requires proof of vaccination and, while no longer requiring masks for staff and patrons, encourages guests to wear them if they feel more comfortable. According to its website, the restaurant also separated tables, reduced seating capacity and improved its air filtration.

East Liberty’s Square Cafe was closed for a few days earlier this month because of COVID-related concerns, but reopened on Jan. 10 with a vaccine mandate in place.

“Out of an abundance of caution and care for our staff and guests, we are now requiring proof of vaccination to dine with us,” reads the Instagram announcement. “In order to keep our doors open and everyone protected, this is the best course of action for our community.”

Diners are also encouraged to wear a mask when they aren’t actively eating.

This list is a snapshot of Pittsburgh restaurants and is subject to change. There are likely other local restaurants that may also require proof of vaccination now or in the future. If you’re not sure, it’s best to check ahead with the restaurant before making plans to dine there.