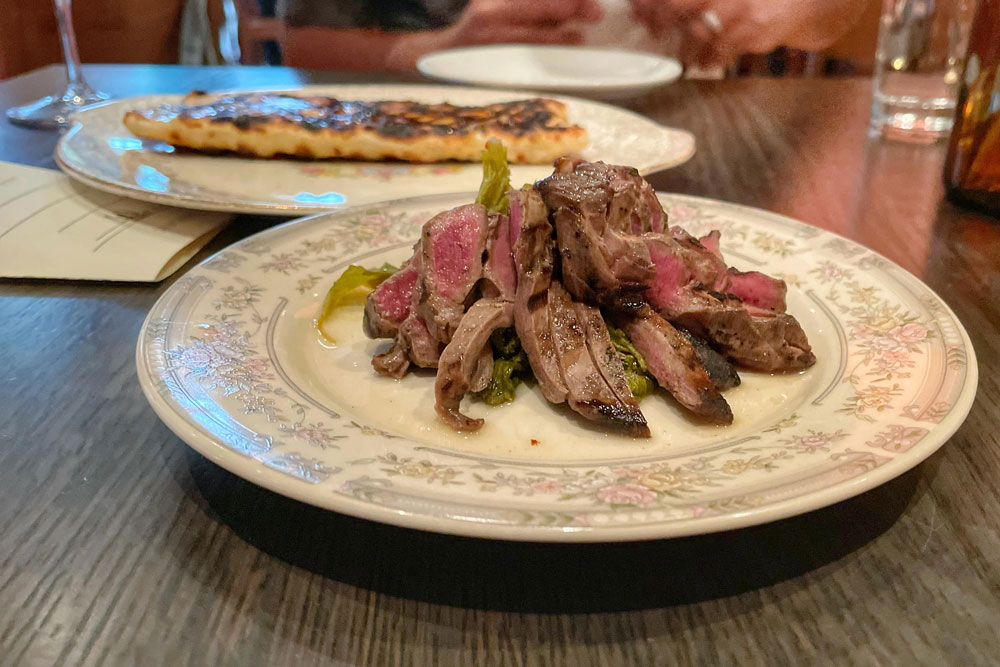 40 North Restaurant & Bar
Pittsburgh lost one of its more enticing dining establishments when Whitfield at Ace Hotel closed in the wake of the COVID-19 pandemic. (The entire hotel shuttered early in 2020 and has never reopened.) Now, Whitfield’s former executive chef, Bethany Zozula, as well as a good number of its previous front- and back-of-house staff, are back in action at 40 North Restaurant & Bar, which opened two weeks ago in the Alphabet City building on the North Side.

When I spoke to Zozula in May, she envisioned her 40 North menu as something that would mingle the ethos of her work at Whitfield and influences throughout her career, which includes a four-year run as executive sous chef of Eleven Contemporary Kitchen. That’s just what I found at dinner last week — a confident chef speaking with her culinary voice, one that celebrates the work of Pittsburgh-area purveyors such as Tiny Seed Farm, be.wild.er Farm, Who Cooks For You Farm and Jubilee Hilltop Ranch, and leans almost as heavily to vegetables as it does toward meat.

But meat is where I want to begin. Zozula is getting two whole lambs every week from Salem’s in the Strip District, and this could prove to be one of the most exciting cornerstones of the restaurant. She brings them in on Thursdays, which is the best day to come for dishes made with the lambs’ offal. A pal and I ordered heart; grilled and served with bright and tangy pickled mustard greens, it was among the best heart dishes I’ve ever eaten. Zozula gave it a nice char on the outside and cooked it rare inside, then sliced with the precision needed to break up the grain on what often is a tough muscle cut. There were two other lamb specials that night — head-and-ankle soup and a liver dish — and I’m looking forward to trying those on future visits if they are offered. If you’ve ever been even a bit curious about eating offal, I suggest trying it here; you’re getting fresh-as-can-be, high-quality lamb cooked by a person who knows how to do it. The program will feature rotating specials with various other cuts of lamb, too.

Among the other dishes I tried, khachapuri wasn’t quite what I expected it to be — I’m most familiar with the version that resembles a bread canoe filled with a sea of melted cheese and an egg — but I enjoyed it nevertheless. Zozula is making it in the style of an early mentor, David Kadagishvili, chef/owner of Chef Dato’s Table in Latrobe; it’s something more akin to a char-grilled cheese wrap. It might not be what you imagine, but with a tasty interplay of bitter, sweet and savory flavors, it certainly is worth ordering.

Of the main courses, the pan-fried rainbow trout — cooked crispy-skinned without drying the fish’s meat — is easy to love, particularly when dressed with bright chimichurri. And don’t overlook the roasted chicken with lemon and herbs; it’s easy to pooh-pooh ordering chicken at a restaurant, but when it’s roasted just right, like this one is, it’s a comforting treat to get it. I’m looking forward to trying dishes such as beet and cabbage borscht, spelt tabbouleh and the double smash burger on future visits.

The front-of-house staff, which includes FOH manager Josh Bondi and FOH manager/beverage director Sam Suter, is leaning forward, too. Service was attentive and I was so into the staff’s curated moody yet upbeat soundtrack, which included throwback tracks such as Roxy Music’s 1975 dance hit “Love Is The Drug,” The Blue Nile’s 1984 electronic groove “Tinseltown In The Rain” and more contemporary music such as Juana Molina’s ambient 2017 “Halo.” It was a reminder to me that one of the best things about dining out is having someone else set the vibe for you — when they do it well, as they did here, it can sure set a mood.
40 W. North Ave., North Side; 412/435-1111, 40northpgh.com 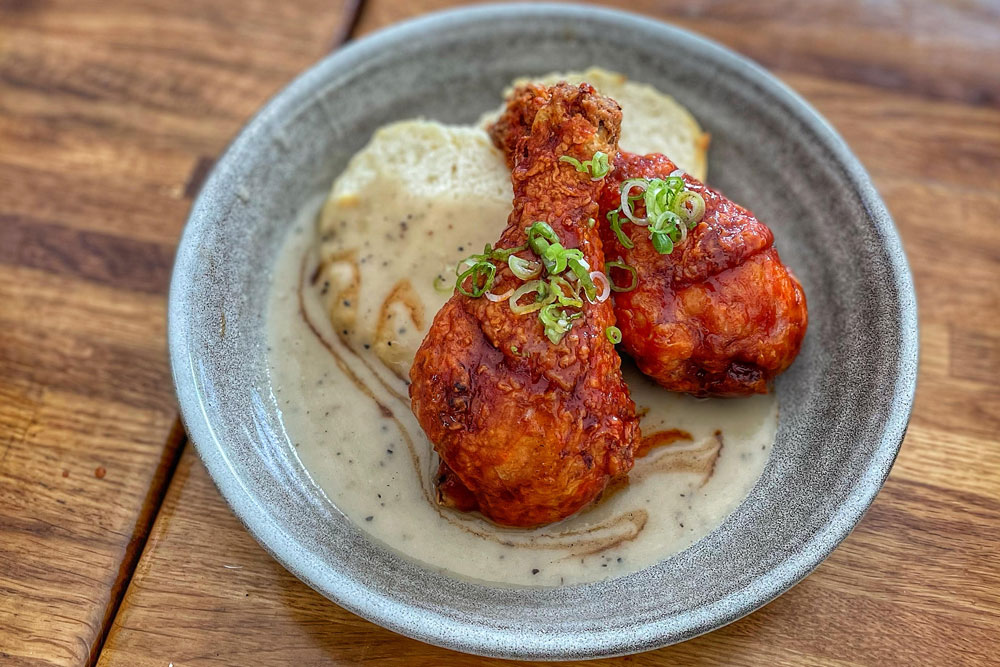 Nanban
“It was kind of planned … but not really,” says Roger Li of his latest restaurant, Nanban. Li runs the business, located in the former Ki Pollo space, with chefs/co-owners Claudia Moyano and Domenic Branduzzi (Piccolo Forno, Grapperia).

Li says that, because Ki Ramen typically is busier in the winter and Ki Pollo in the summer, they had for some time mused about combining the two Butler Street concepts into one. However, it took a flood in the Ki Ramen basement in December to finally prompt the merger of the establishments into Nanban. “We looked at it as an opportunity to change what we were doing,” Li says.

They examined what was working at the individual restaurants and then meshed them together for Nanban’s opening offerings, adding dishes such as “Korean Joints with Biscuits” that draw a bit from both to bolster the menu. That dish has ultra-crisp fried chicken drumsticks coated in sweetly spicy gochujang paddling with a crumbly house-made biscuit and a savory gravy made from tonkatsu broth. It’s delicious.

The menu is deep with fried chicken options and includes three ramen varieties — shoyu, miso and shio — that made the cut from Ki Ramen’s lineup. In addition, a reinvented dan dan udon with sesame paste, bean sprouts, doubanjiang, rayu cukes, nitamago and smoked tofu is on the menu; the dish is lovely to eat, hitting an umami-rich sweet spot on a warm summer afternoon. Moyano’s excellent empanadas are still at the forefront and a small selection of bao are available.

Li says he’s already thinking about what’s next for the former Ki Ramen space. He launched a popup, Parlor Dim Sum, to raging popularity last year and is considering turning that as well as a few other experiments he’s worked on into a modern Cantonese-American style restaurant with weekend dim sum service. As for the much-anticipated omakase restaurant on the floor between Umami and Round Corner Cantina, Li says that it still is in the works, too.
4407 Butler St., Lawrenceville; 412/224-2518, nanbanpgh.com 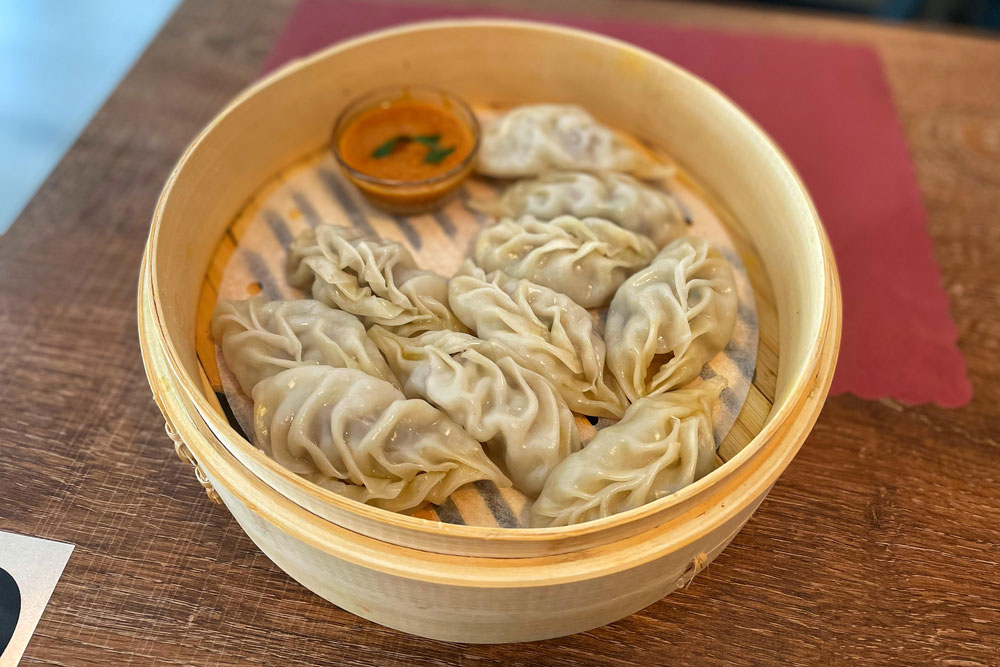 Sagun Asian Restaurant
Sachin Kunwav and Deepshika Ghimire continue to make a splash in the South Hills restaurant landscape. The couple launched Namaste Momo Corner in 2018 and took ownership of Himali Kitchen the following year. Earlier this year, they sold Himali Kitchen to their uncle (and also have divested their interest in Namaste Momo Corner). Two weeks ago, they launched their newest venture, Sagun Asian Restaurant in Baldwin Borough. Like their previous restaurants, Sagun specializes in Nepali cuisine. Kunwav is Nepali, and Ghimire was born in Bhutan but grew up in a refugee settlement in Nepal; she emigrated to Pittsburgh in 2010 as part of the refugee resettlement program.

Once again, momo is front-and-center on the menu. I tried the pork version, and the filling, luscious and with just the right amount of sweetness and pungency from alliums, is even better than I remembered it to be at Namaste Momo Corner. Although the couple currently purchase dumpling skins rather than make their own, they are steamed to perfectly soft and chewy texture. I also tried chicken chau-chau; the brothy Nepali noodle dish with ginger, garlic, tomatoes and spices such as turmeric and chili powder was exceptionally satisfying. I’m excited to work my way through the rest of the small menu sometime soon.
4871 Clairton Blvd., Baldwin Borough; 412/668-0357