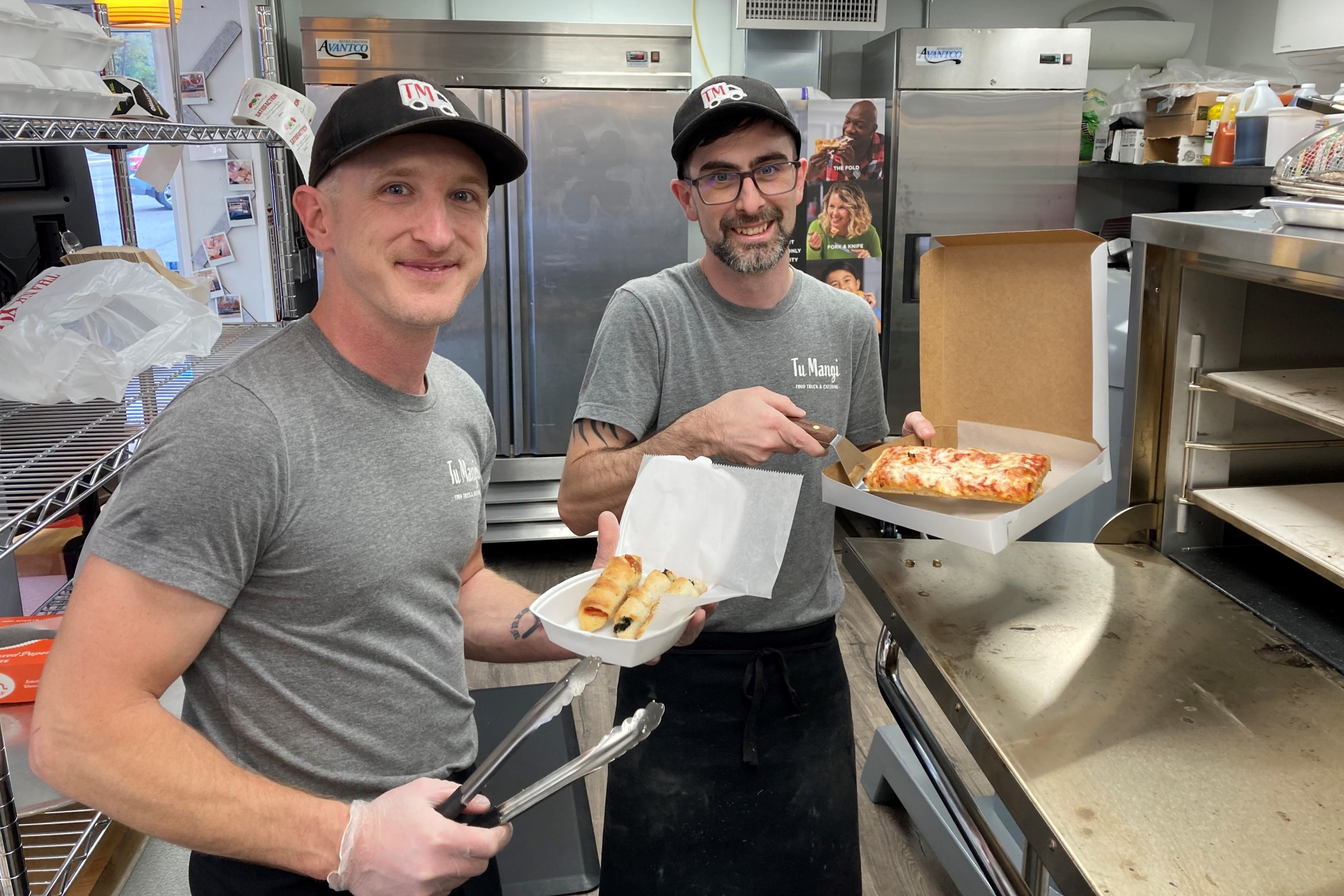 Less than six months after hitting the gas pedal on their Italian food truck Tu Mangi, Rocco Levine and Richard Pine found themselves in the fast lane to restaurant ownership.

If you drive down Route 51 in Baldwin Borough, you’ll see the vehicle parked beside the brick-and-mortar shop that opened Oct. 18. It’s worth a stop to fill your tank and brush up on your Italian. Hours are 11 a.m. to 7 p.m. Tuesday through Thursday, 11 a.m. to 8 p.m. Friday and Saturday and noon to 6 p.m. on Sunday.

“Tu mangi” means “you eat,” but you won’t find the typical Old World fare at this take-out and delivery spot.

Through lots of research and taste-testing, Levine and Pine, who’ve been friends since their high school days, developed a menu filled with specialty hoagies, Sicilian-style pizza by the slice, salads, appetizers, dips and wedgie sandwiches. 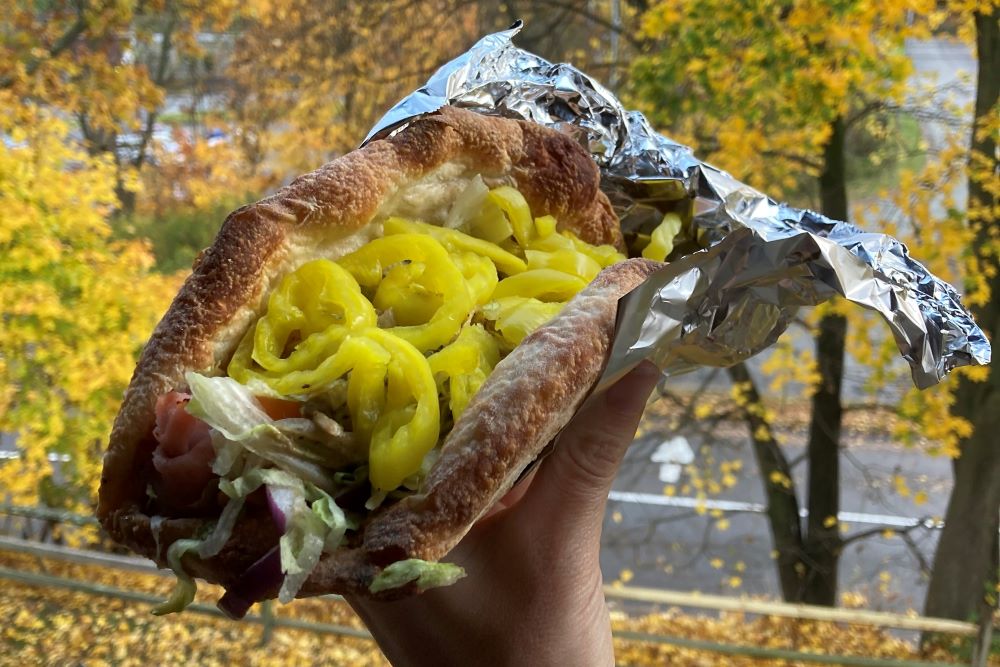 What is a wedgie? Homemade white flour dough is filled with sweet or savory ingredients, baked in the pizza oven and folded over like a large, but still manageable taco. The filling combinations are endless and Tu Mangi allows you to build your own or choose one of their creations.

I ordered the Typical Italian, which was anything but typical: grilled salami, ham and capicola, mozzarella and provolone cheeses, lettuce, tomato, onion, pickled hot banana peppers and house-made balsamic dressing. (I would drink this delicious dressing by the gallon.)

The crust — a recipe that, like his marinara and pizza sauce, has been years in the making — has a nice chew to it and the meat and veggies are fresh and flavorful. Other specialty wedgies (which can be turned into a hoagie on a Mancini’s roll) include spinach and feta, stuffed pepper, Buffalo chicken and steak.

This month’s special, The Gobbler, (stuffing, oven-roasted turkey, green beans, corn, cranberries cheddar cheese and gravy) allows you to hold Thanksgiving dinner in your hand while the waffles & chicken — available in wedgie-form only — is fried bird drizzled in locally sourced maple honey syrup and powdered sugar in a vanilla-flavored waffle dough.

If you want to eat the sweet dough by itself, Tu Mangi offers zeppoles — bite-sized Italian donuts with powdered sugar and your choice of cream cheese icing or raspberry or chocolate dipping sauce. I popped a few dozen zeppoles while sitting in rush hour traffic at the Liberty Tubes. Highly recommended to avoid road rage. 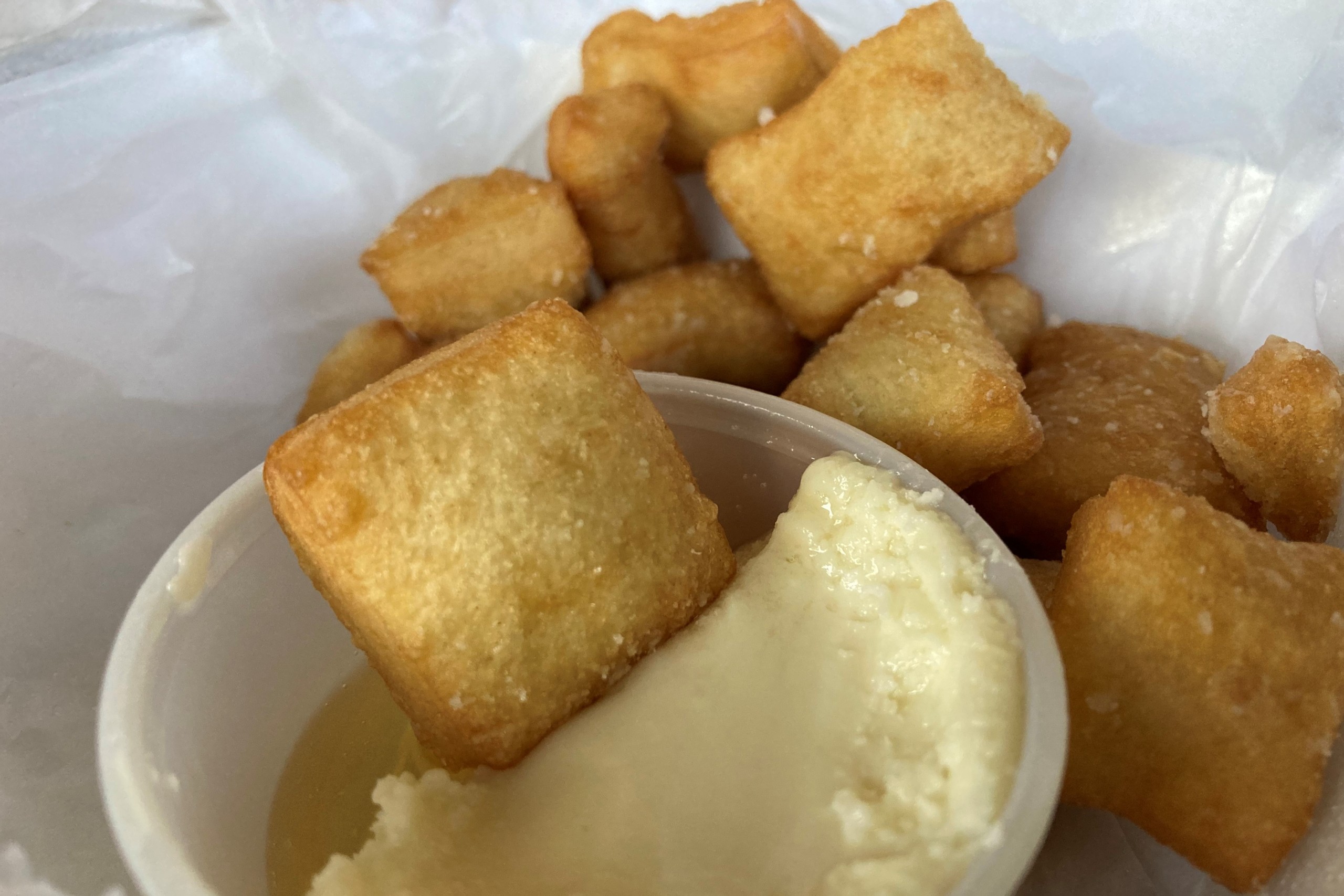 He grew up in his dad’s Italian Village Pizza franchise in Squirrel Hill and has worked at various shops around Pittsburgh, such as DeMore’s Pizzeria in Millvale.

Pine, a Cleveland native and entrepreneur, would make the drive to Pittsburgh just to get a taste of Levine’s pizza.

After a lifetime in food service, Levine left to work in the medical marijuana industry. Pine joined him on the dispensary endeavor. Last year, feeling burnt out, the friends decided to launch their own business that caters to folks with the munchies. 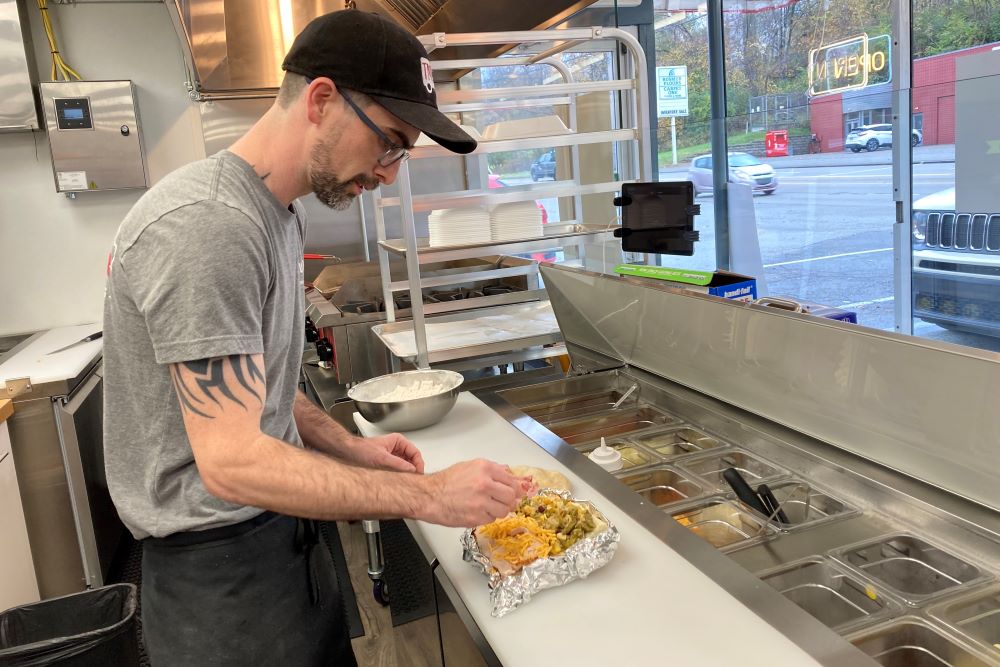 The food truck hit the road in June and visited events and breweries from Washington, Pa., to Butler County. Word of mouth helped Tu Mangi make a name for itself. Then a building at 4851 Clairton Blvd. became available and the guys jumped on the opportunity to expand.

Most recently, the spot housed Peace Love & Little Donuts, but for decades, it was Danny’s Pizza & Hoagies. Longtime Baldwin Borough and White Hall residents drop in to reminisce about the old eatery and Levine and Pine are selling the enormous Danny’s sign to the highest bidder to help pay for their own signage.

Despite being a grab-and-go restaurant, Tu Mangi customers tend to hang out for a while. The kitchen is wide open, which allows the owners to chat while they’re working. An order usually starts with a patron asking what “tu mangi” means.

“It’s a great conversation starter and it creates more of a personal relationship with the customer,” says Levine, who, like Pine, is affable and chatty.

The truck, which is decorated with the words “You eat.” in different languages, will be back out and about this spring and the owners hope to franchise Tu Mangi in the near future.

When you go to Tu Mangi you’ll definitely eat, but you might not know when to stop.