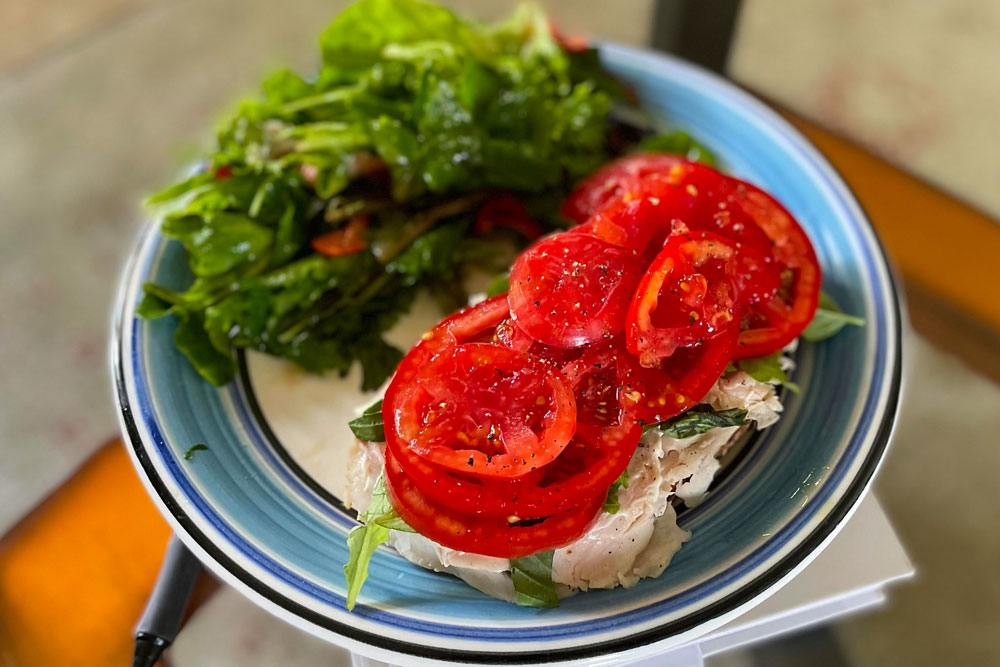 Slicer Tomatoes from be.wild.er Farm
Everyone has their top tricks and know-betters for picking out hit-or-miss produce such as tomatoes and melons at the farmers market. Here’s the only trick you need to know, and it’s not a trick at all: develop a relationship with your farmers. Last week at the Bloomfield Saturday Market, Dan Wentmore of be.wild.er. Farm of Natrona Heights nudged me away from the array of heirloom tomatoes to an F1 hybrid slicer called BHN 589, telling me that he and farm owner Megan Gallagher made delicious BLTs with them all week. We were coming off a rainy week and the humidity was downright swampy; terrible conditions for heirlooms.

So even though the hybrid slicers didn’t have that old-time complexity of a peak Oxheart or Black Krim, they tasted like the reason a thick slice or two became standard practice for inclusion on a sandwich or hamburger. I made a couple of open-faced sandwiches on toasted seeded sourdough from Mediterra Bakehouse, and the sweet-tart-sour BHN 589s did precisely what they were supposed to do, adding a bit of fruity acidity to my tartines; all three tomatoes I purchased were consistent in flavor and texture, too. And that’s exactly what you want when you’re looking for a tomato to play co-star to bacon or turkey or avocado or whatever else you’re using as a sandwich base.

I was hoping for a drier spell this week so that I could thrust some heirlooms into the spotlight with a Caprese sandwich on a Madeleine Bakery and Bistro baguette and a salad with feta and pickled shallots. It looks like it’s going to be another slicer week. Bring on the hamburgers. 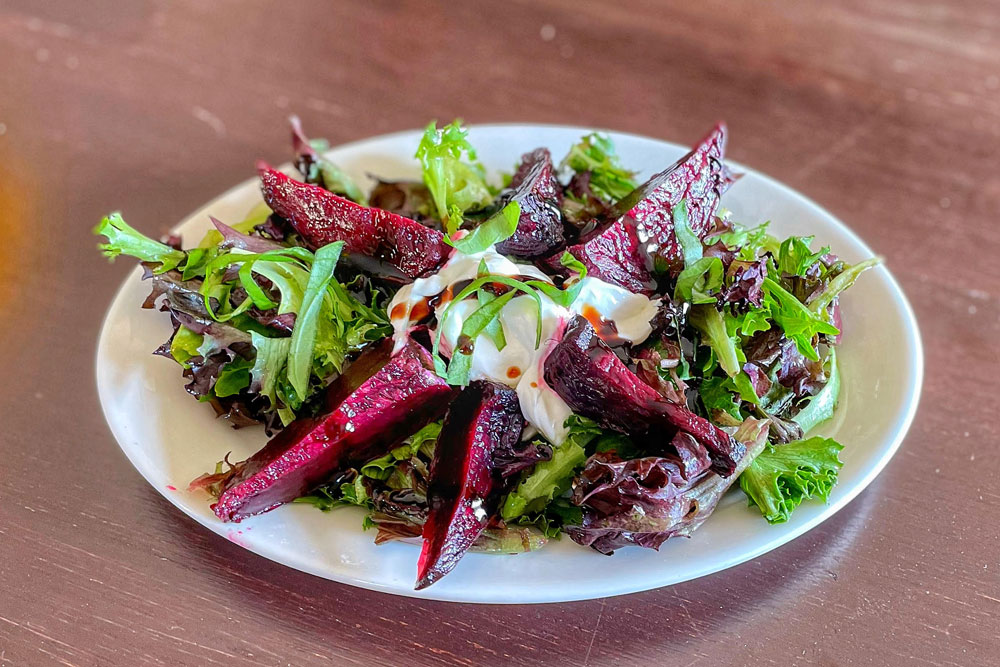 Beets at the Billy Motel
Every once in a while, I know right away I’m going to have a long-lasting love for an establishment. That’s exactly how I felt as soon as I walked into the Billy Motel in Davis, West Virginia, last year. A friend suggested that I get a drink there when I visited Canaan Valley last year. What she didn’t know was that its dynamic owner Joy Malinowski, a chef who had worked in Philadelphia and San Francisco prior to returning to her native West Virginia, had added a menu of globally influenced but locally sourced small bites to bolster business on the revamped motel’s patio since the COVID-19 pandemic had put a hold on drinks inside its cozy bar. My brother and I ate nearly the entire menu that evening, and I lauded the beets tahina for being as tasty as the version at Zaha; the Philadelphia restaurant is one of my favorites in the country.

A year later, I was back in Canaan Valley and made it a point to stick around long enough to return to the Billy when it opened at 5 p.m. on Wednesday.

The beet salad was different this time — Malinowski said the taproots were so good this time of the year it would have been a shame to do anything that didn’t fully highlight their flavor — so they were roasted and dressed with balsamic reduction and sour cream, and served over a bed of tender greens. Fantastic. Napoleon in Rome featured two hulking slices of heirloom tomatoes, each variety stacked with eggplant and mozzarella and topped with basil, capers and red pepper coulis. Beef wrapped in grape leaves — inspired by the Vietnamese dish Bò nướng lá lốt, which uses lolot leaves — was accompanied by a tart and funky fish sauce. And charred Shishito peppers with fried halloumi cheese, Marcona almonds and oil-cured olives made what would be a delicious bar snack on their own. Everything was as delightful as the memory of my first visit.

If you’re like me, you’ll be tempted to order a dish or two more than you need at the Billy. Do it. This is a special place, and it’s worth seeking out. It’s approximately a three-hour drive from Pittsburgh. 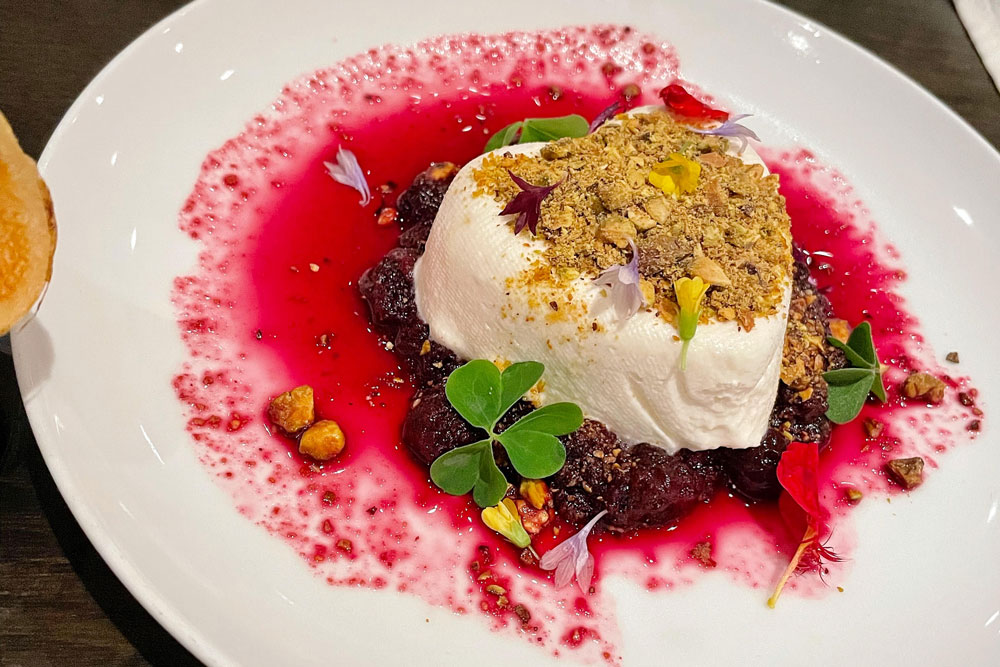 Coeur a la Creme at 40 North
Coeur a la creme is a heart-shaped dessert typically served on and around Valentine’s Day. The French treat — a no-bake, crustless cheesecake — is a light and lovely way to end a meal. I’m glad the kitchen at 40 North decided to break the holiday boundary and establish it as a signature dessert at the North Side restaurant. It’s serving as a canvas for executive chef Bethany Zozula to celebrate peak seasonal fruit (and in the winter, I suspect, as a way to highlight the preserved versions of that fruit). Two weeks ago, the chevre heart melded with a compote of blueberries. It was adorned with wild rose syrup, crowned with crumbled pistachio and jeweled with edible flowers and leaves such as sorrel. It’s one of my favorite desserts in town right now, and I’m looking forward to experiencing its evolution as we head into apple and pear season. (If you’re looking for a more savory heart, I’ll point you to the outstanding lamb heart dish Zozula is serving on Thursdays and Fridays; see my What’s New in Pittsburgh Food for July for more on that dish.)