Say so long to summer by consuming these seasonal foods and beverages. 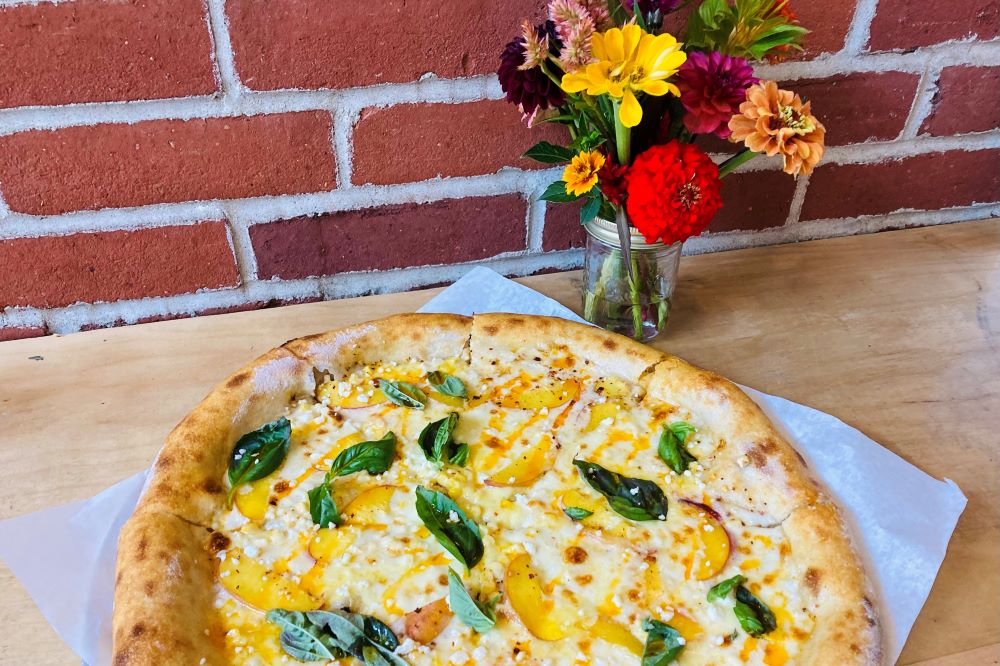 Pittsburgh Magazine headquarters is located on Washington’s Landing, formerly Herrs Island. That’s about as close to a vacation as I’m going to get this year. I’m sure a lot of Pittsburghers are in the same boat thanks to high gas prices, inflation and the lingering threat of Covid.

The good news is that you don’t have to travel far to experience summertime food and beverages. I spent a day pretending to be a tourist in my own town. These roads are confusing. 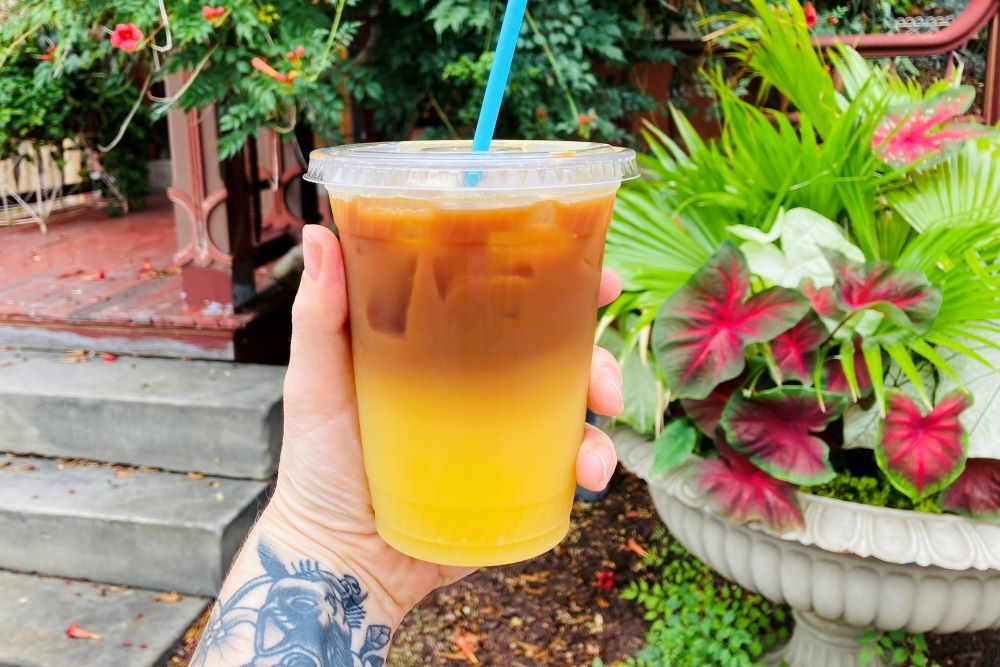 I’m not a morning person, but my day started with a Shadyside Sunrise on the North Side.

Adda Coffee & Tea House, which has multiple locations, including one Western Avenue, makes this beverage that doesn’t look or taste like your average cup of joe. When you float a double-shot of espresso on ice-cold, fresh pineapple juice, it creates a surprisingly tasty and beautiful, break-of-dawn beverage.

This eye-opener became a customer favorite when it debuted several years ago at Adda’s original South Highland Avenue spot in Shadyside. Now, even on cloudy days, it’s brightening peoples’ mornings across the ‘Burgh. And, thanks to that one-two-punch of caffeine, it’ll keep them going right through sunset.

As a pizza purist, I rarely veer from a traditional, red-sauce pie.

Driftwood Oven, a sourdough pizzeria and bakery in Lower Lawrenceville, provided the latest exception to that rule by bringing back their Peach & Corn pizza.

Throughout August, you can get a slice, a 16-inch round or a 12-cut Roman loaded with the two summertime staples plus mozzarella, buttercup cheese and white wine shallot cream sauce. It’s finished with morita chili oil (which adds a slight, but not overwhelming, spiciness to), queso fresco and fresh basil.

If you’re offended by the sight of any pizza topping besides pepperoni, keep your sunglasses on when you take a bite. Your taste buds deserve a vacation, too. 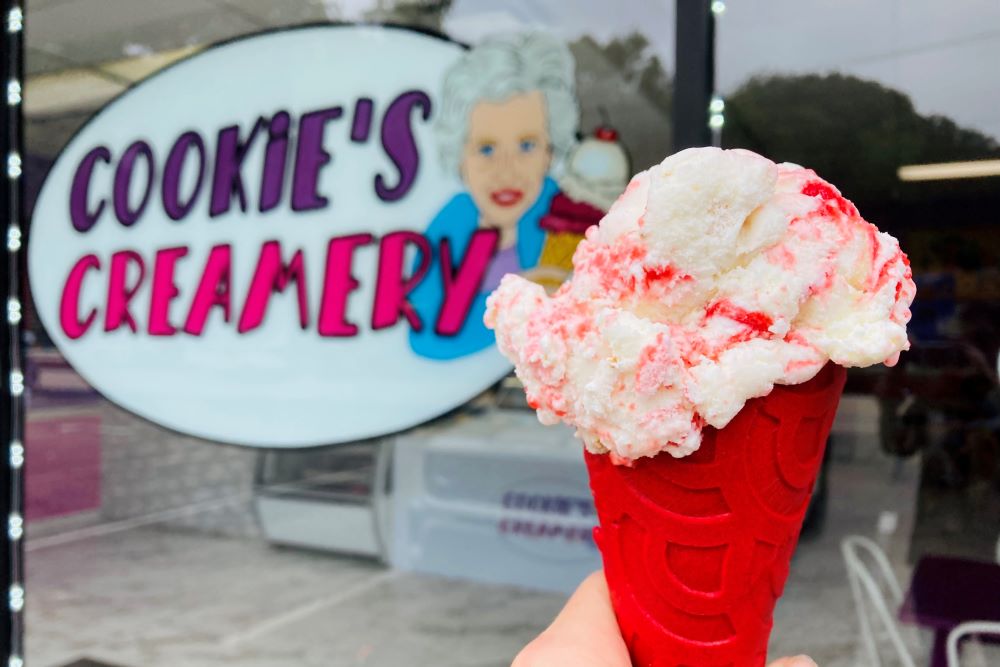 It’s worth a trip over the river and through the woods to Cookie’s Creamery in Ross. Owner Josh Helfer named the new business after his late grandmother, who was affectionately known as Cookie. The menu items are as sweet as that story.

In addition to offering more than 30 varieties of hard ice cream, there are milkshakes, sundaes, freezes, floats, gourmet chocolate and, of course, cookies from nearby Good L’Oven Cookie Shop. The parlor also has homemade waffle cones in different colors and flavors, including red velvet, cinnamon brown sugar, salted blue corn, birthday cake, orange creamsicle, dark chocolate and pink vanilla. My daughter’s go-to scoop is the Superman, which, thanks to the sugar-content, enables her to leap small buildings in a single bound.

Forget the Man of Steel; I like “The Golden Girls.” Ever since Betty White died, I’ve been on a Strawberry Cheesecake kick. I intended to capture a summery picture of my purchase, but, when placed atop a red cone, this particular scoop resembles a bloodshot eye. Fitting, given that I’m a Halloween-obsessed insomniac with a sweet tooth. I scream, indeed. Happy Augtober! 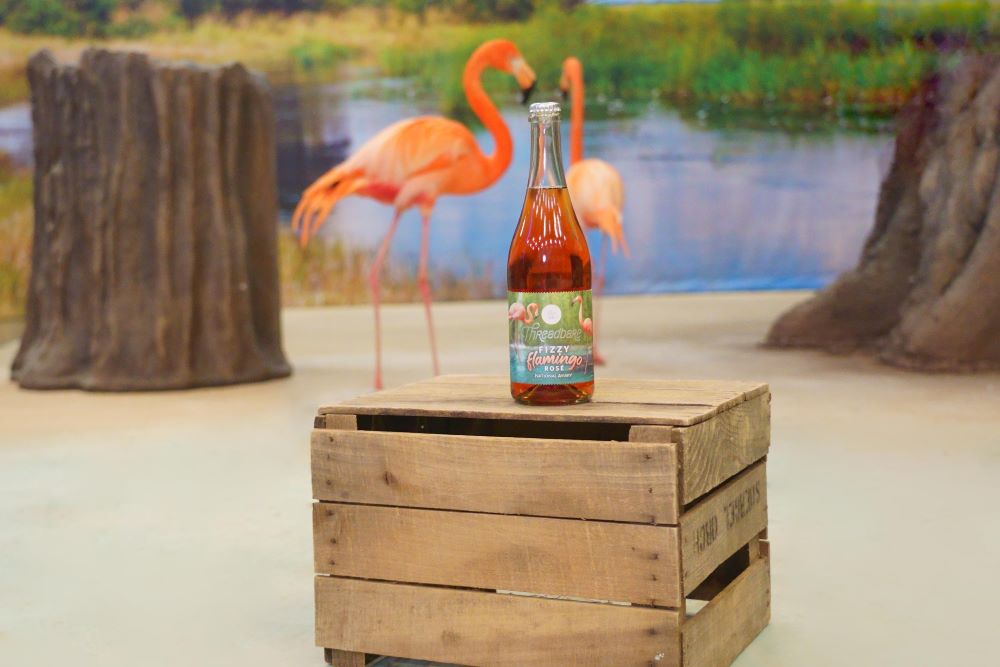 For many, back-to-school sales mark the beginning of the end of summer.

If you’re already stocking up on fashion essentials for the kids at Ross Park Mall, visit the company’s bottle shop on the lower level to pick yourself up a bottle or two of Fizzy Flamingo Rosé. 9.99% of each sale will be donated to the National Aviary on the North Side.

After fermenting a custom blend of local apples at the cider house in Spring Hill, the Threadbare crew infused it with rose hips and hibiscus flowers. The end result is a bubbly, pink beverage that pays tribute to the living lawn ornament it’s named after. 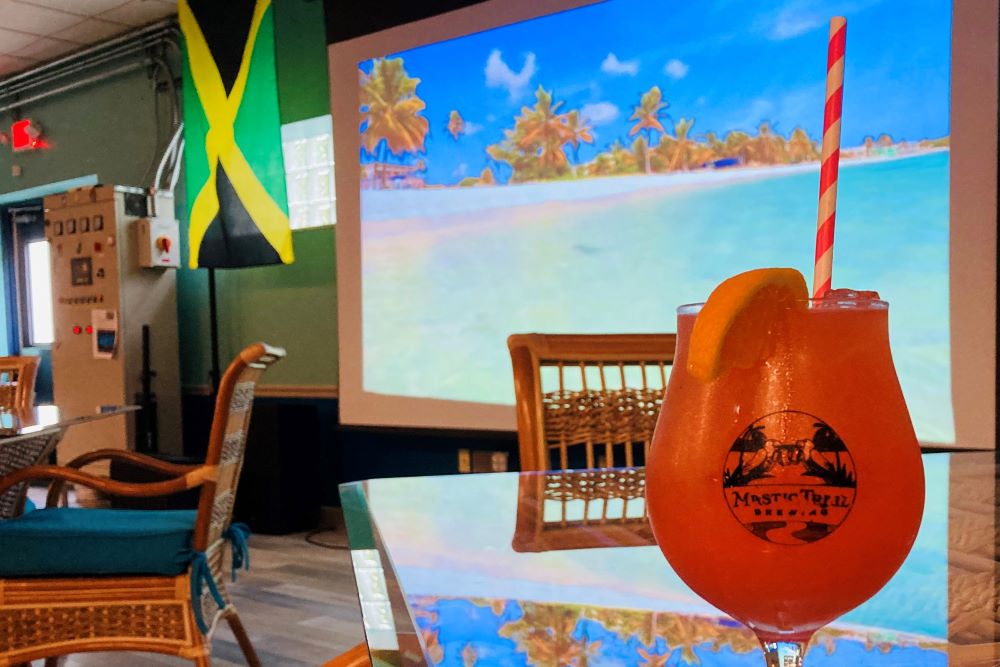 Two summers ago, Ben Williams transformed a former Moose Lodge into a 7,000-square-foot Caribbean-themed brewery named after a 10-mile scenic pathway on Grand Cayman Island. From the rattan furniture and cabana bar vibe to the floor that’s painted to look like sand and sea, it’s a nice, little respite from the heat and the industrial chic of typical taprooms.

Order a beachy beer such as the Surfin’ Moose Blonde Ale, Ghost Ship Mosaic IPA or St. Croix Coconut Vanilla Oatmeal Stout and relax on the back patio. Not a beer fan? Mastic Trail serves all the classic vacation concoctions including Rum Runners and Bahama Mamas.

The food menu is similarly island-inspired with Bacalao Fritters, a Cubano sandwich that’s roughly the size of Cuba and a Coconut Shrimp Po’boy.

Instead of sending postcards to family and friends this year, you can simply post a picture on social media with the caption “Wish you were beer.”