The mobile eatery will soon open brick-and-mortar spots throughout Pittsburgh. 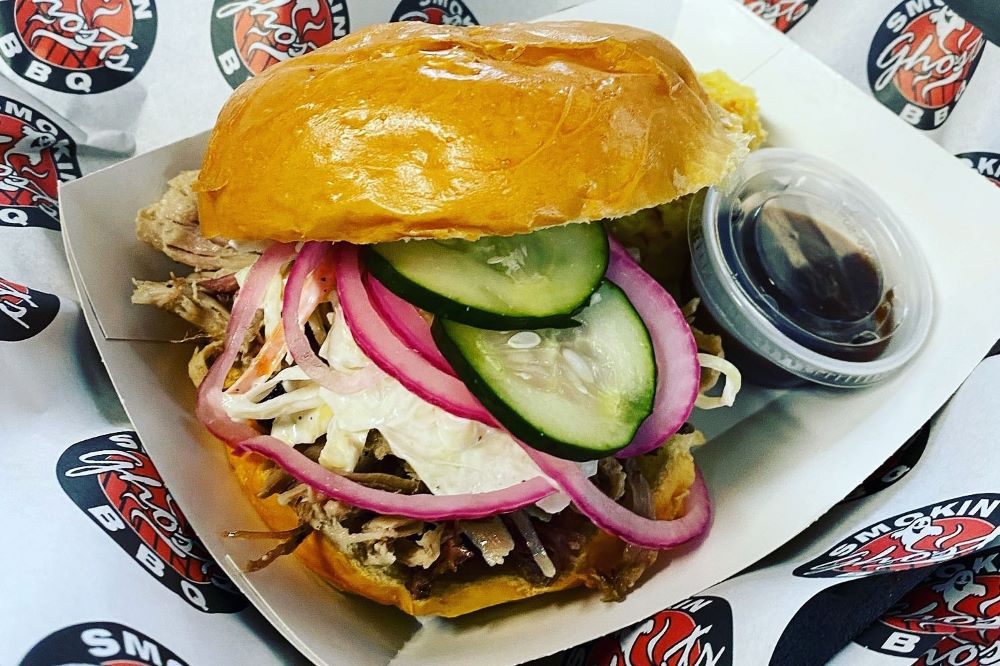 During the early days of the pandemic, when workers disappeared from office buildings, Smokin Ghosts BBQ food truck began haunting neighborhoods throughout the region.

“When Covid hit, it knocked everybody out of the industrial park, so we went into these 60-home communities,” says Don Garrett, who owns the business with his wife, Lori. “That’s how we were able to survive.”

With restaurants closed and hungry families housebound, the Garretts’ vehicle became like a Good Humor truck for carnivores. They sold a lot of brisket mac-and-cheese, pulled pork sandwiches, pork belly burnt-end tacos and full racks of St. Louis-style ribs — and lifted spirits in the process.

Now the Pleasant Hills couple, who moonlight as paranormal investigators, have a permanent spot in the SouthSide Works Town Square, a revamped recreational area that should be fully operational by late September or early October. Developer SomeraRoad is investing more than $37 million in capital improvements and more than $130 million in the riverfront property.

Smokin Ghosts will be joined by two other, all-seasons food and beverage purveyors — Levity Brewing Co. and Slice on Broadway — along with a stage, a dog park (it opens this weekend!) and an outdoor seating area.

The prefabricated, modular eatery has a small dining area inside but is mostly designed for grab-and-go customers. Don Garrett, a Georgia native, is always conjuring up new menu ideas for the hickory-smoked meat, including creative twists on Carolina-style pork and Texas brisket. He’s got an on-site smoker that can hold a 160-pound pig, 64 chickens or 30 pork butts at a time.

Due to skyrocketing costs and supply chain issues, he’s had to improvise, replacing the best-selling smoked turkey sandwich with a smoked pork belly BLT.

“I’ll sous vide the pork belly in duck fat in herbs for 8 hours and then smoke it,” he says with just a hint of a southern drawl. “When you order, we will put it on the flattop for caramelization and then add garlic aioli sauce, lettuce and tomatoes.”

The heavenly aromas wafting from the business could raise the dead.

After working in IT for 18 years, Don Garrett decided to take his barbecuing hobby to a professional level. He bought a customized trailer and set up a food stand at 1825 Liverpool St.in Chateau near the Ohio River in September 2019 and, soon after, added a food truck to the fleet to keep up with demand.

Then COVID snuck up like one of the specters he’s encountered on his paranormal adventures throughout the region, including the Trans-Allegheny Lunatic Asylum, West Virginia Penitentiary and New Castle’s Hill View Manor.

Within the next year or so, Smokin Ghosts BBQ will make contact with customers at a space near Robert Morris University and another spot inside The Distillery at South Shore. Located in the former Joseph S. Finch & Co. building on McKean Street near Station Square, the complex will feature a 5,000-square-foot craft distillery and tasting room, artisanal marketplace, rooftop bar and indoor and outdoor seating.

In the meantime, Don Garrett’s traveling around the country with his barbecue team, 3 Taxi Guys, trying to rack up awards on the competition circuit. This month, he’ll go hog wild at Praise the Lard, a cook-off event in Murphysboro, Illinois.

He says he’ll leave his barbecue empire to his children when he’s gone. But, like the scent of hickory smoke, he plans to linger for a long time.