Josh Sickels will continue to make classic Queens-style pies at the new location of his White Oak pizzeria. But he’s adding a selection of specialty pies to the mix. 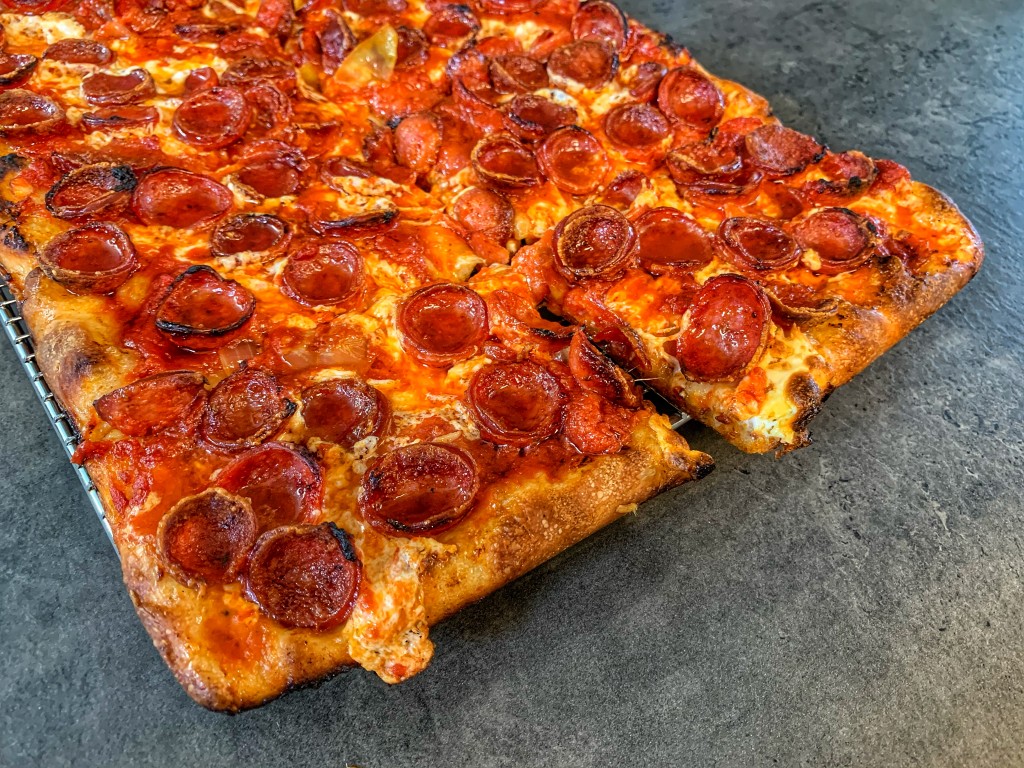 “I’ve probably made a hundred pizzas in the last month and a half,” says Josh Sickels as he stretches a rectangle of dough in an old, heavy, steel pan.

The Rockaway Pizza owner is working out the kinks of a pan pie inspired by Prince Street Pizza in Manhattan. Prior to baking, the dough, fermented for 48 hours, is dressed with a cooked tomato sauce seasoned with piles of onion, garlic, butter and red pepper flakes and then is topped with ovals of fresh mozzarella cheese and a mountain range of thick-cut pepperoni. It’s a crunchy, spicy, full-bodied bite when it’s pulled from the oven 15 minutes later. I found it hard to stop myself from eating square after square.

This pie, which he calls Carcosa, is an evolution in form for Sickels. His singular focus on perfecting a Queens-style New York pie earned him high praise from pizza enthusiasts (including this native New Yorker dining critic) when he operated Rockaway Pizza just a few hundred feet from his new spot. Sickels closed his original location more than a year ago, anticipating that he would have a relatively quick transition into the new, significantly roomier space. 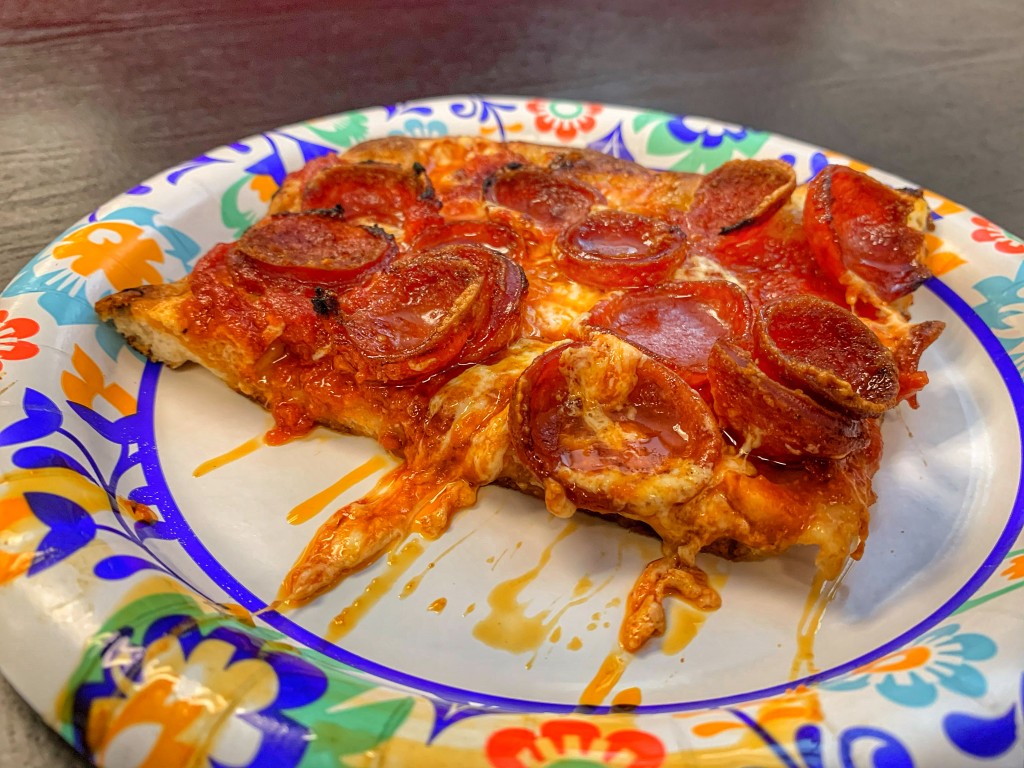 Sickels suffered a series of setbacks, including a financial dispute with an equipment distributor, the emotional fallout from the termination of a seven-year relationship, COVID-19-related construction delays and the lag of a civic inspection bureaucracy that often moves like molasses. It looks like the wait is over.

The lengthy delay offered Sickels a lot of time to think about technique. “The bakers have taken over. They’ve infiltrated the pizza world. Everyone is making pizza with sparse cheese,” he says, referring to the neo-Neapolitan and, more recently, Roman, styles that have dominated the American pizza landscape in the past decade.

This isn’t to say that Sickels doesn’t respect the craft of baking. Even a neighborhood slice shop, he says, is better when you put some effort into the base of a pizza. “We’ve evolved beyond making dough that starts at 5 a.m. and is used for an 11 o’clock lunch rush,” he says, looking to the new-school-meets-old-school pizza makers such as Scarr’s Pizza in Manhattan as an example of where he thinks the progression of the New York pie could go. “It’s still New York pizza, but it’s more forward-thinking. A couple of days of slow fermentation adds complexity to the flavor.”

Sickels isn’t milling his grain like Scarr Pimentel, but he has used the last year to explore the push and pull between holding close to pizza traditions and having fun experimenting with pushing his passion forward. 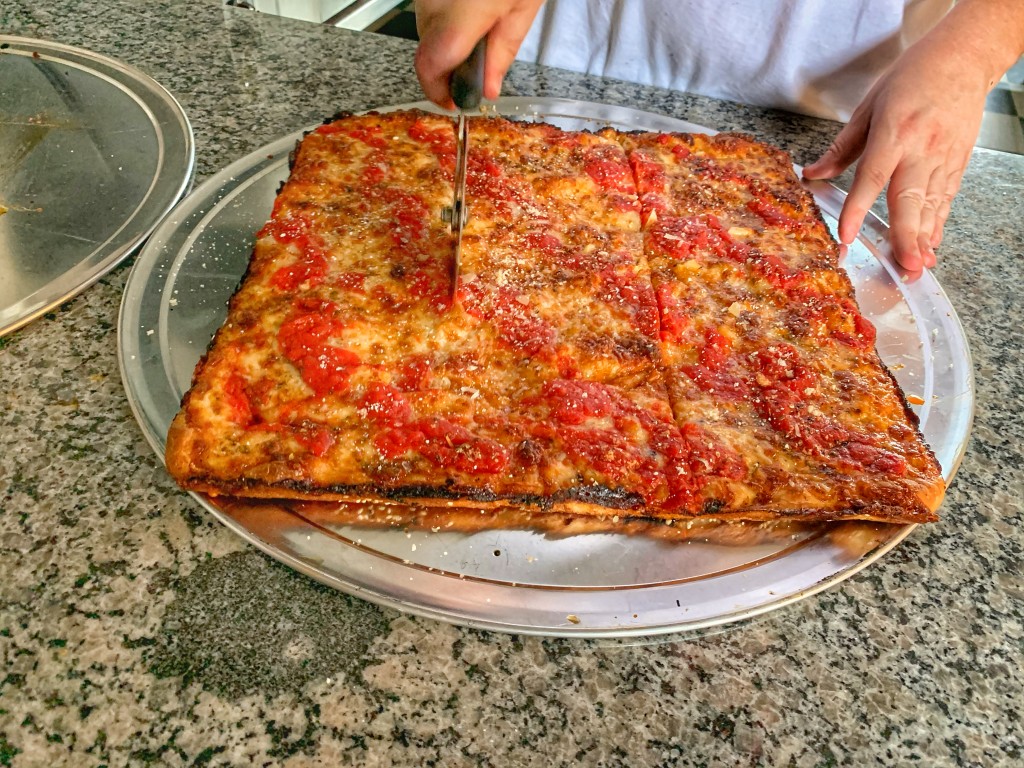 He says that one way to do that is to allow for the execution of sauce — raw or cooked, enhanced with elements such as onions or pure tomato, for example — to get as much attention and celebration as the dough does. “The sauce, and the way you spice it, is a difference-maker,” Sickels says.

To that end, Sickels will open Rockaway Pizza 2.0 with an expanded repertoire of styles. In addition to the Carcosa, Sickels is introducing a Grandma-style pie coated at the bottom with sesame seeds; the seeds add a hint of crunch as well as a modicum of earthiness that pairs nicely with the pie’s raw tomato sauce and shredded Mozzarella cheese. He’s even taking a geographic departure from New York City, heading to Connecticut with a New Haven-style white clam pie. Eventually, he plans to introduce more northeastern pizza permutations such as New Jersey tavern pies and a Trenton Mustard Pie inspired by Papa’s Tomato Pie. “I’ve been fooling around with that, but with limited success so far. The flavor of spicy brown mustard just takes over everything that’s on it. I’m trying to find the balance,” he says. 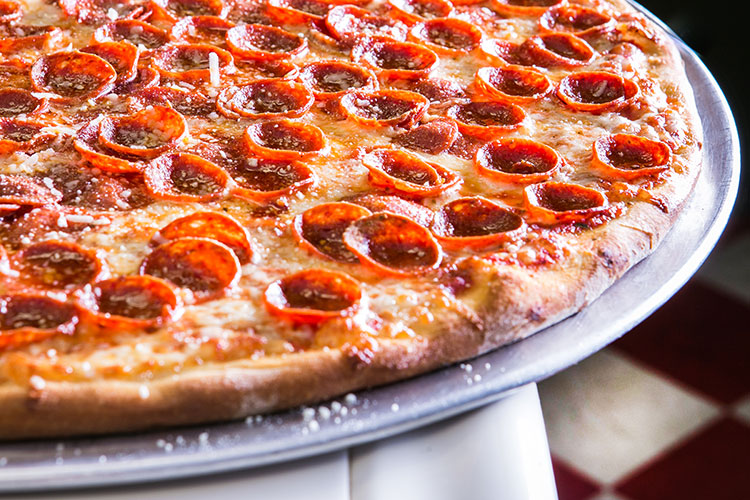 There’s good news, too, for those of us enamored with Rockaway Pizza’s Queens-style pie — even with the introduction of new items, these still will be the focus of the menu. Sickels says he has the cheese-melt and sauce dialed in, and he’s spent time working to build a slightly crispier crust structure that will hold its quality over time. One way he’s doing that, he says, is by using a higher quality olive oil.

I’m thrilled Rockaway Pizza is ready to be back in the mix of Pittsburgh-area eateries. The umami-rich, gooey, slightly oily and salty slice that flops a bit at the end and offers a bit of tug in the thin-but-not-too-thin crust when you bite into it rarely is made outside New York (or even within the city limits) with Sickels’ skill. “I always need to have one foot firmly planted in this style of pizza. I want to get nuts with specialty pizzas. But I want my key pizza to be that slice with the orange oil dripping down your arm,” he says.