A new chef and a liquor license turn the Lawrenceville restaurant into a dinnertime destination. 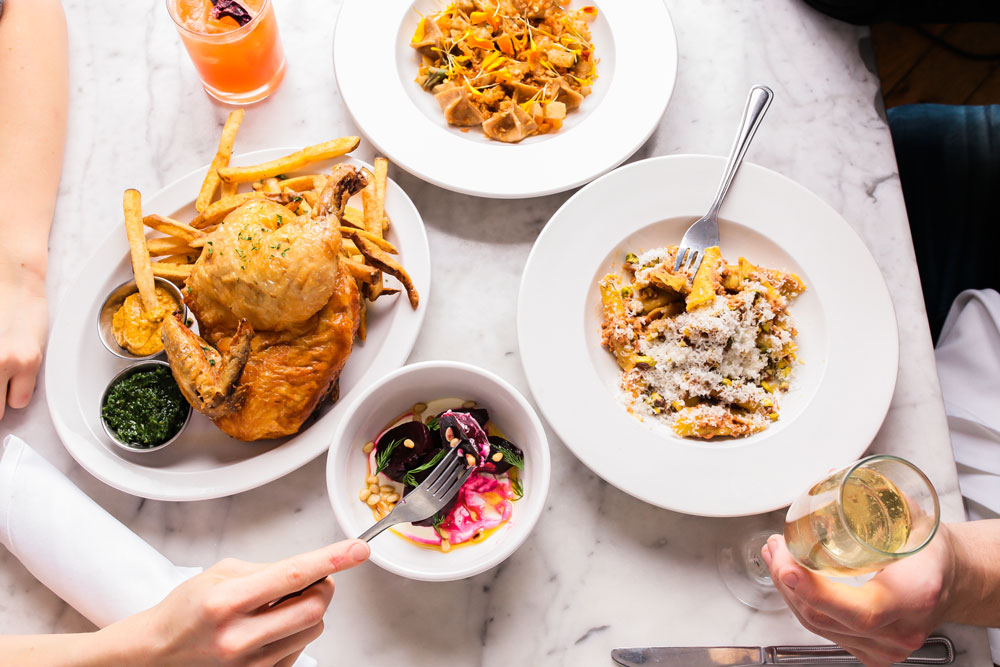 When Joey Hilty and Emily Slagel opened The Vandal in Lawrenceville in 2015, it was the hip, fresh place to be in a neighborhood garnering praise as Pittsburgh’s next hip, fresh destination. The blocks surrounding the establishment have, indeed, blossomed over the years but the neighborhood transformation pumped out a proliferation of party bars that offer generic culinary options, often making Central Lawrenceville feel as though it’s a new South Side, with most of the destination dining located in Lower Lawrenceville. It’s not to say there aren’t good places to eat, but the ascendance of The Vandal from slick daytime joint to intimate evening destination makes it even more valuable as a restaurant. Armed with a liquor license and a young chef who is cooking with focus, it’s worth giving the spot a second look.

Becca Romagnoli was promoted to executive chef about a year ago after working as sous chef and line cook at the restaurant for several years. She’s already cooking with touches of finesse that belie her relatively short experience running a professional kitchen. 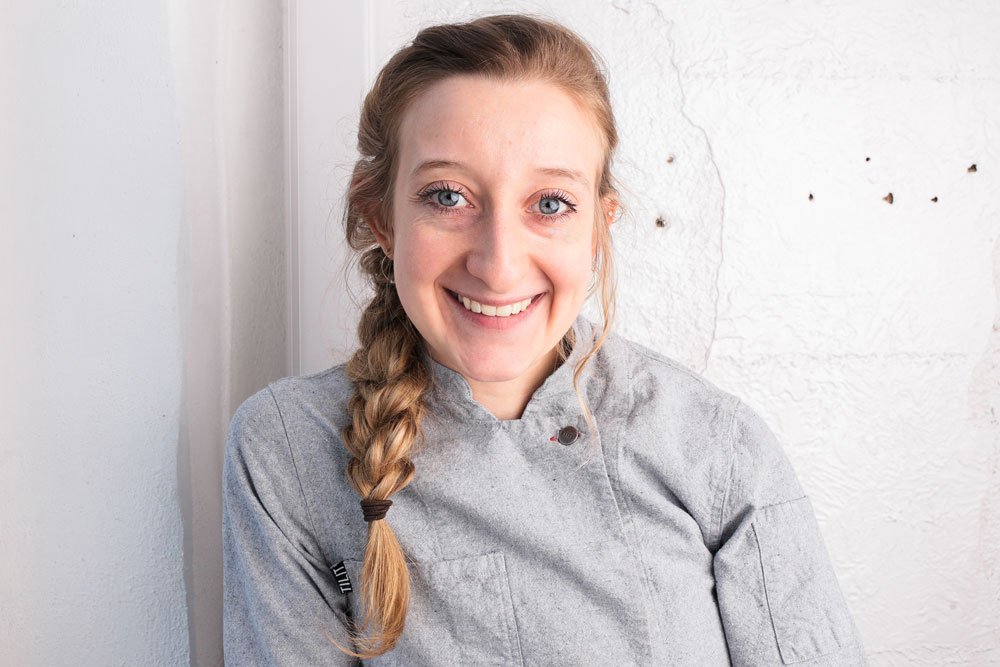 Romagnoli is one of a growing number of chefs around town who are on a mission to find pasta perfection. Indeed, various preparations of one of the world’s ultimate comfort foods is having a moment right now in Pittsburgh, with high-buzz restaurants from the Strip District to O’Hara Township touting house-made pasta as a reason to visit their establishments. So why go to The Vandal?

I like that Romagnoli, who also co-owns the subscription-based Forma Pasta, is weaving flavor and form that move beyond traditional preparations yet doesn’t venture into the realm of a novelty just for the sake of an Instagrammable photo. For example, Romagnoli makes cestini, a basket-shaped pasta, with whole-wheat flour. It adds a toothsome toastiness, without the grainy texture often found in whole-wheat pasta. I wished there were a little more celery root stuffed inside the night I had it, but I loved the harmony of the classic combination of brown butter, sage, butternut squash and apples. Romagnoli folds house-milled pistachios into garganelli, a square pasta rolled into little cylinders. It’s a lovely muted green when it’s cooked; more importantly, the pistachios add a mild sweetness. In December, she served her garganelli with lamb ragout and just enough fennel and Parmesan cheese to create a well-rounded bite. 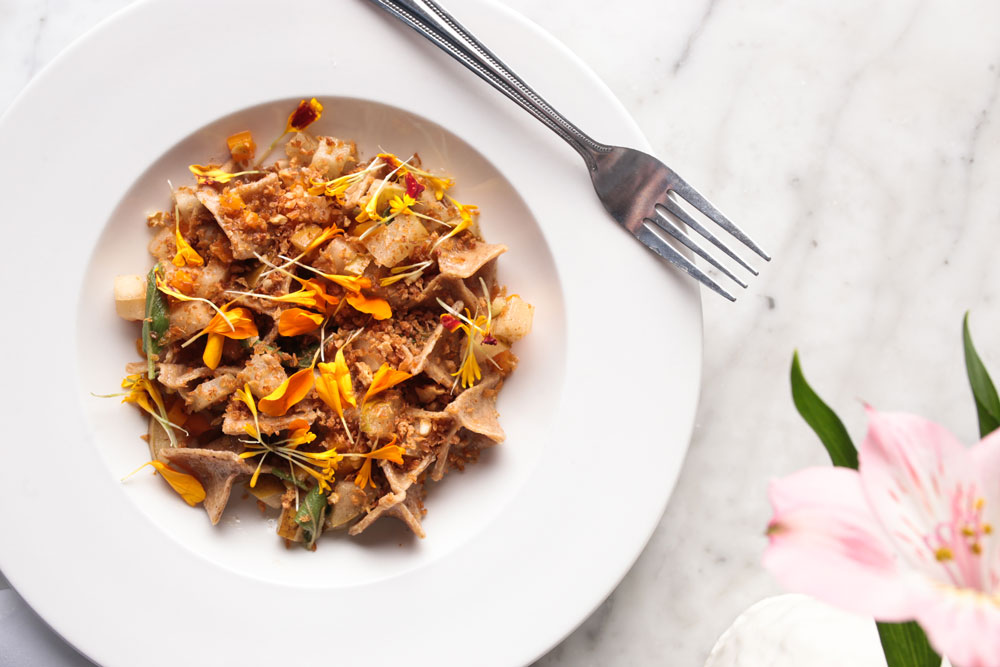 While $20 for a bowl of pasta might create a bit of sticker shock, it’s on-par with or a bit lower than other establishments that are doing the same thing.

Romagnoli shows promise beyond pasta dishes, too. Start your meal with pickled beets. Soft-textured, bright and earthy, with a good punch from citrus and complementary accents of pine nuts and dill, it’s a dish that stimulates the appetite. Crostata with hearty greens, leeks and ricotta, built on a layered crust that crunches with buttery delight, is another worthy small plate. The tender greens are bolstered with a sweet and soft pungency from the leeks, and the bite finishes with a touch of heat by way of red pepper flakes. All of that is tied together with house-made ricotta.

There are a smattering of larger-format dishes worth considering. Romagnoli’s chicken ranks among my favorite dishes of the year so far. A half of a chicken is brined overnight then cooked sous vide until nearly done. It’s finished (unbreaded) in the deep frier, which sets up for a crispy, salty and juicy bite that celebrates the flavor of the bird. I also was a fan of pork belly served with sweet potato, parsnip and spiced apple. In this crowd-pleaser, the belly was cooked to highlight its natural sweetness, with the fat rendered precisely as it should have been. The super-smooth sweet potato puree was a slightly savory ballast, and shards of dehydrated parsnip added dimension to the presentation (but were a little tough to eat in the context of the dish). 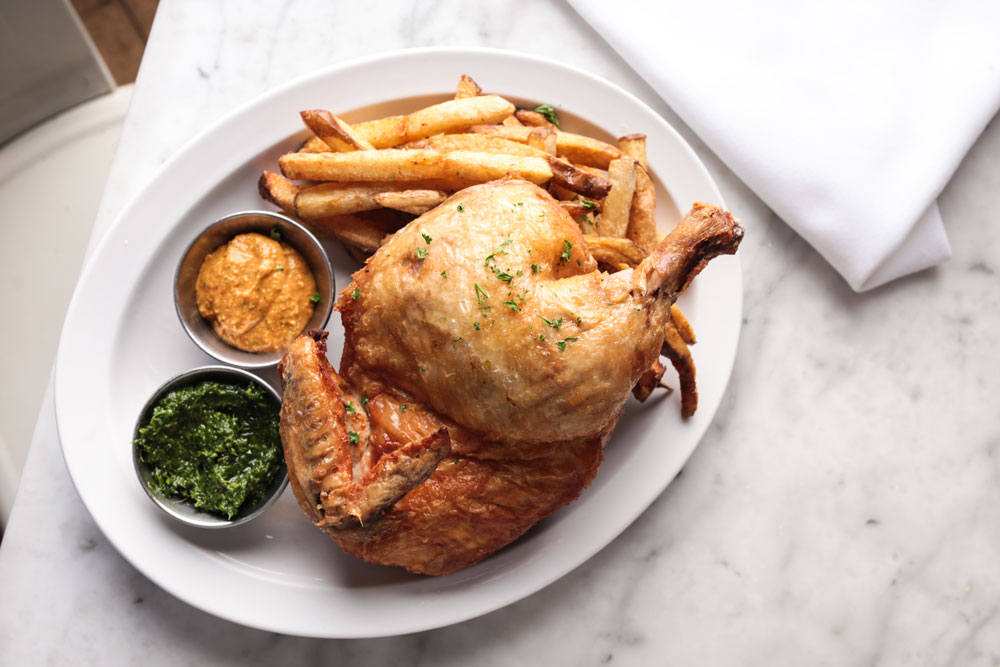 The liquor license seems to be working out just fine, too. The Vandal doesn’t have a destination bar program, but it serves its purpose. At any given time, there are four or five selections of red and white wines, all of which pair well with food and are available by the bottle and glass. The Vandal’s cocktail selections are gentle spins on the classics and are made with finesse. There are a couple of good beers, too.

I like The Vandal’s warm, slightly quirky service. The space has limited, slightly cramped seating, and its minimalist interior design feels a bit more aloof in the evening than it does during daytime hours —  which is to say it won’t be for everyone. However, if you’re looking for an intimate evening destination that feels of-the-moment but crafted with a softer swagger than some of the other prominent names in town, I’d suggest getting to know what Romagnoli is doing by making reservations for dinner at The Vandal.