The reinvention of the Lawrenceville restaurant is a culinary and architectural delight that offers Pittsburgh diners an evocative experience. 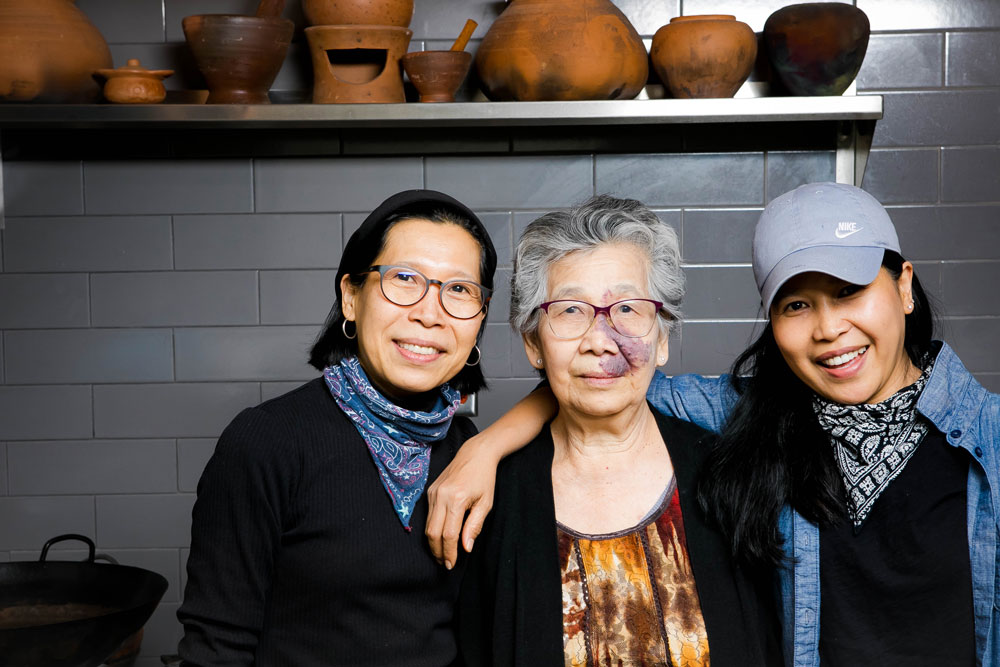 Box away the fond recollections you had of the old Pusadee’s Garden.

When owners Watcharee Tongdee, Bootsaba Tongdee and Michael Johnson closed their nearly decade-old business in late 2017 for remodeling, they shut the book on that chapter of the Upper Lawrenceville restaurant. Their reimagined Pusadee’s Garden, framed by its fresh menu perspective, new building construction and thoughtful design choices, is ripe for new memories. It might have taken them more than three years to get from there to here, but what they opened in January is extraordinary.

Bootsaba Tongdee is the restaurant’s primary chef. Family matriarch Pusadee Tongdee, 79, is on-site every day preparing hung lay, all the curries, nam priks and lunch for the kitchen crew. Johnson and Watcharee Tongdee add to the restaurant’s culinary voice. The rest of the kitchen staff are a talented bunch. Together, they’ve built a honed-in menu of multi-regional and homestyle Thai dishes, and, for the most part, they’re not playing it Pittsburgh-safe.

The menu is the perfect size — big enough to offer enough choices to assemble a pretty epic shared dinner yet easy to navigate for a well-balanced, restrained meal. I found nearly all of the dishes I had to be well-composed, layered and well-executed in composition and cookery — so much so that you’ll have a hard time choosing your favorites. 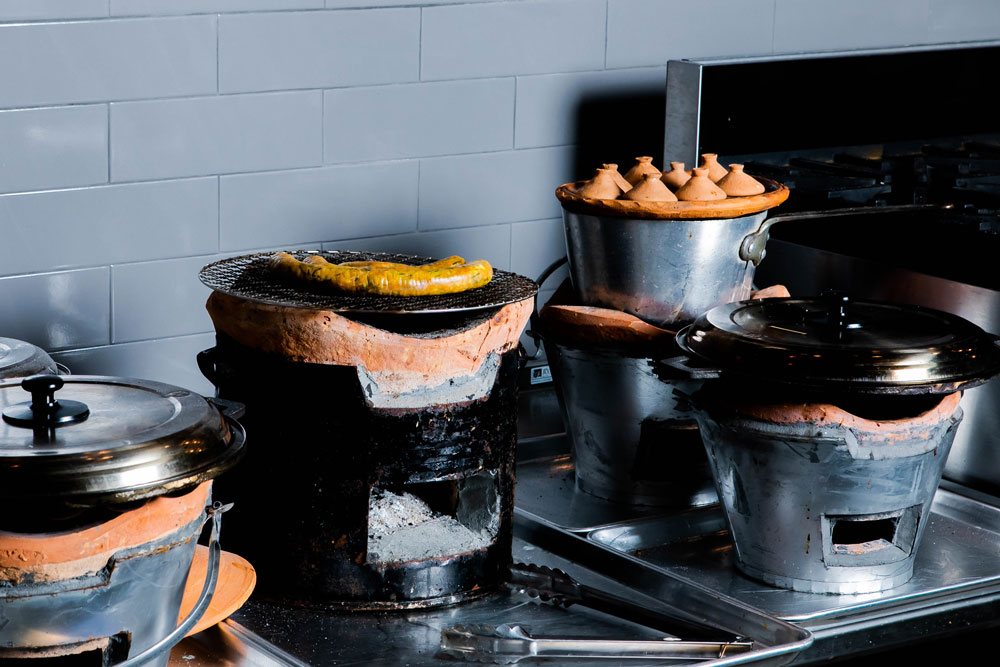 One of the kitchen upgrades is an array of tao charcoal grills. That open-fire method of Thai cookery, which uses long- and hot-burning rambutan charcoal, produces many of the restaurant’s star dishes.

There are crispy, juicy, sweet chicken thighs that make a good entry point for people who may be a little tepid about approaching a menu more specific than what you may find at your neighborhood Thai restaurant. Grilled Humboldt giant squid, served with lemongrass, chili and garlic sauce, eats like a steak rather than the little ovals or tentacles you typically picture. These massive cephalopods, which can be 5 feet long and weigh more than 100 pounds, aren’t commonly found on menus around here. Lemongrass pork meatballs, one of just a few holdovers from the old restaurant, are vastly improved by cooking over live coals. A new addition, Wagyu beef with butterhead lettuce, is a satisfying option, too. 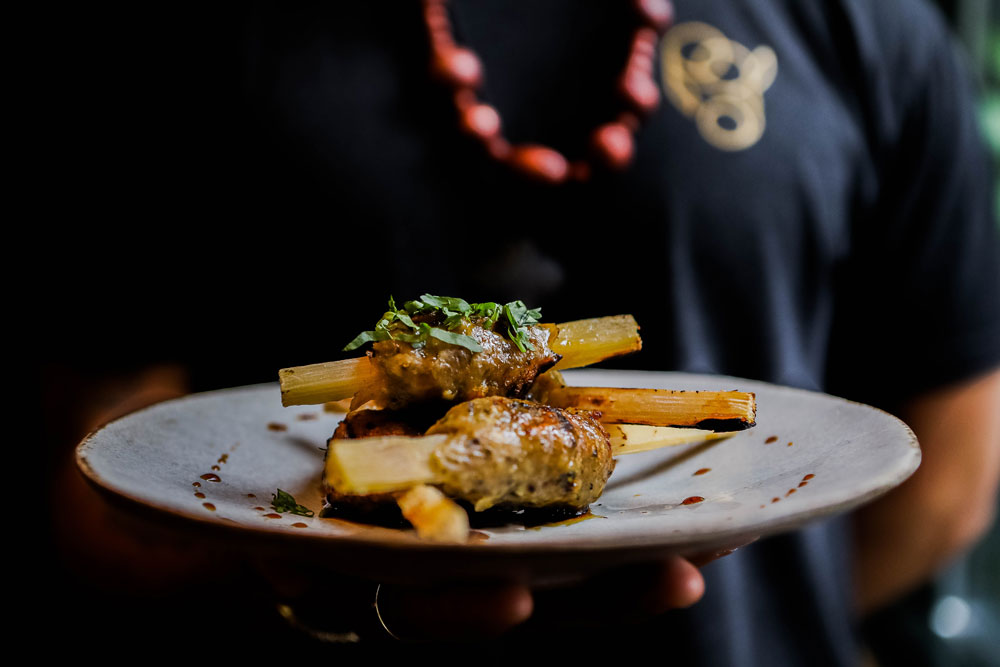 But if I had to pick one favorite dish from the tao grills, it would be pork belly with what’s billed as caramel sauce (it’s soy-and oyster-sauce heavy and lively with garlic and chili). Unctuous fat and melty meat are bathrobed in smoke and punched up by sweetness, heat and umami from the caramel. “This is the best pork belly I’ve had in a very long time,” said a well-traveled friend. Don’t overlook the tender-crisp greens that come with the pork (or with any dish; the vegetable cookery at Pusadee’s Garden is exemplary and something I’d love to see come to the forefront more often). 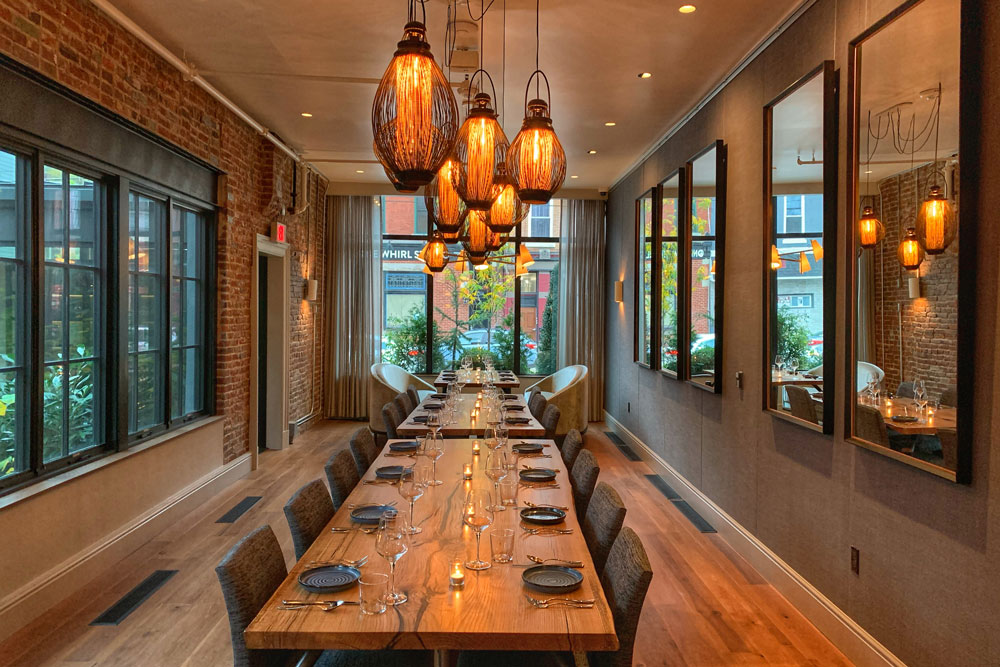 Local architecture firm mossArchitects did masterful work transforming the original Pusadee’s Garden building — where indoor dining never was a draw — and a long-standing but neglected neighboring building into an intimate, sophisticated space smartly sectioned with five gracefully appointed dining rooms, each with its own tranquil color scheme and design. The two buildings are connected in the front by a newly built, elegant entrance arcade. Its dark, glossy concrete floor and the long chain of glass windows overlooking the new garden together spark transition from the hubbub of Butler Street into the peaceful restaurant. On the far side of the interior is an open kitchen; inside, as you’re passing from one side of the restaurant to the other, you can observe the team of cooks at work (and, if you stay late enough, get a little jealous of what look to be delicious staff meals). Throughout the restaurant, picture windows offer sightlines to the garden.

The best view of the garden is from the new glass-box bar in the far left corner, which is a perfect place to have a drink and a snack. Pusadee’s Garden now has a liquor license — but don’t fret about the loss of another BYOB restaurant, because the bar program built by Johnson and lead bartender Curran “Curry” Dewhirst is a triumph. Dewhirst has flown under the radar in Pittsburgh’s craft cocktail community. At Pusadee’s, his selection of bespoke and riffs on classic cocktails deserves high praise, finding a wide berth of layered, well-built offerings that sometimes read as a little too complex or sweet (or both) but always drink balanced. Beer drinkers — and this is a cuisine that pairs well with beer — will appreciate the 12-tap, mainly local selection, as well as a smartly curated reserve bottle list. Johnson has also curated a magnificent wine list that includes a grand selection of global bottles as well as a deep by-the-glass program. 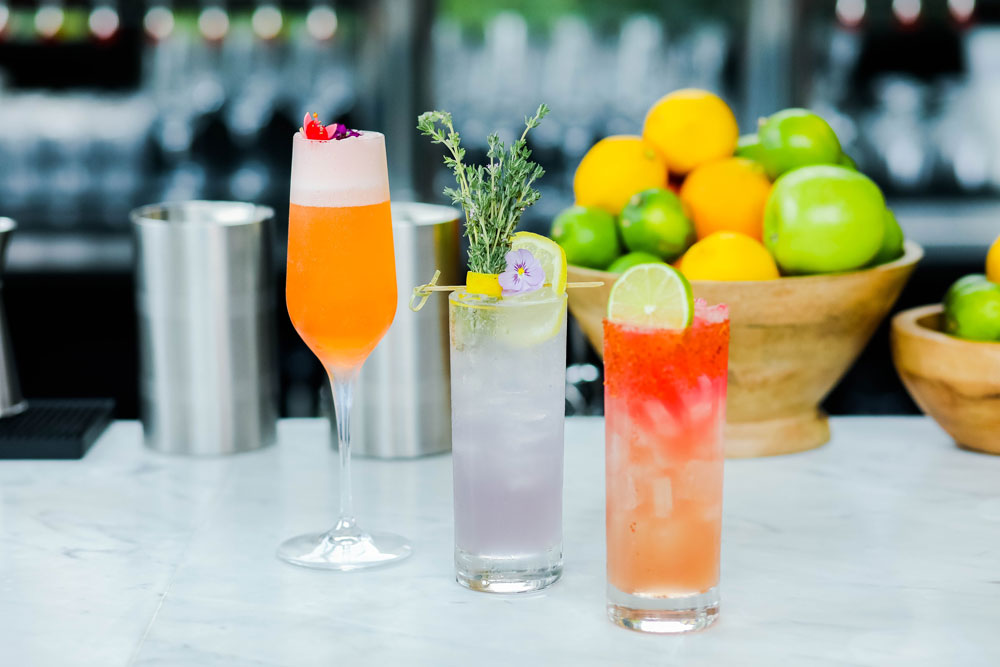 Once the restaurant settles more deeply into its rhythm, I’d love to see a limited late-night menu at the bar. This way, they can still offer dishes such as Street Noodles #1, a holdover from the old Pusadee’s and a popular dish at Johnson and Watcharee Tongdee’s other restaurant, Noodlehead; right now, it feels square-peg-round-hole-ish on a menu so rooted in regional cooking. As nicely prepared as it was when I ordered it on one visit, I’d skip it in favor of more remarkable offerings such as fall-off-the-bone lamb shank in rich, warmly spiced Massaman curry or a bone-in short rib Panang curry with textures from a nearly caramelized exterior to meltaway meat. Then there’s the crisp skin and meaty, juicy and (just a little) briny flesh of grilled Pacific amberjack. It’s topped with tart, savory and aromatic three-chili, tamarind and garlic sauce with a heat that builds as you eat it. It’s a light dish that eats like a substantial one, and another set of perfectly cooked greens rounds it out.

Inside all of this is the eponymous garden which is more modernist than its previously lush iteration. Julie Kachniasz of Ground Stories designed the patio layout and even in its first season — a garden takes years to grow into itself — the space is already one of the most lovely places in Pittsburgh to have an al fresco dinner. Jeff Pierce and Tom Bedger of Toadflax maintain the ever-changing garden and all interior floral plant displays. 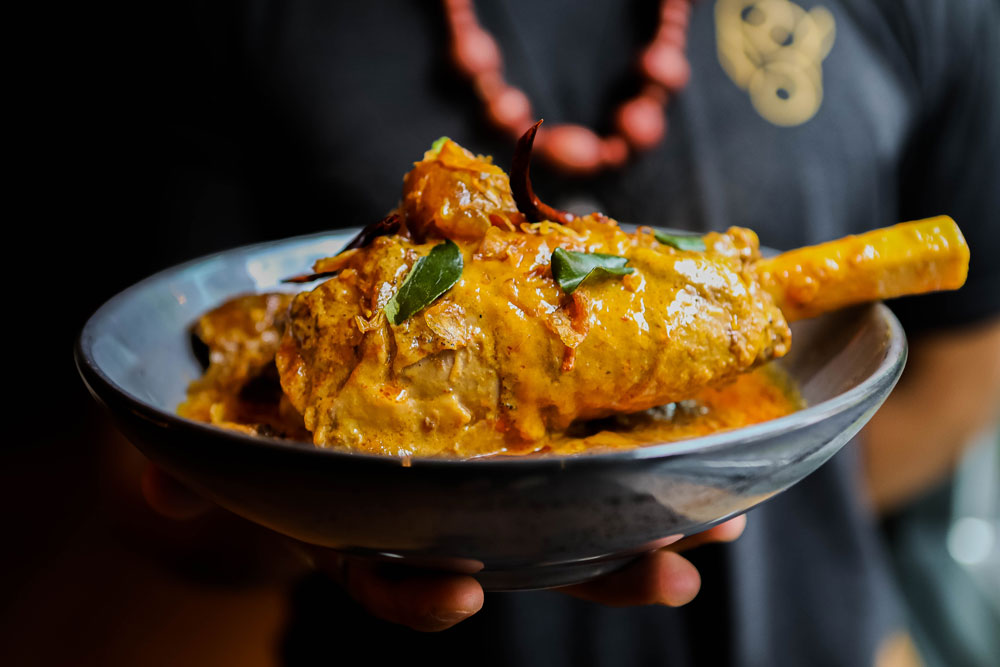 As exceptional as Pusadee’s Garden is just a few months into its reinvention, there’s space for improvements that would serve to hone the establishment from something that’s peak Pittsburgh into a destination that deserves a place in the national conversation.

Two are lingering safety precautions brought about by the COVID-19 pandemic: I’d get rid of the QR codes and move back to paper menus. It might seem like a bit of a quibble, but I don’t want to scroll through various windows to find what I’m looking for or take my phone out every time I want to order a cocktail or another glass of wine. There’s a place for digital menus in our new restaurant world, but it’s not as a little square of dots, dashes and blots plopped on a handsome wood table in a stylish establishment such as Pusadee’s Garden. I didn’t dig that I have to pack up my own leftovers like I’m at a fast-casual restaurant, either — shoveling them into boxes and stacking them at the end of the table when they could instead be packed and held in the kitchen until the end of the meal.

Offering “share” plates the size of coasters is another issue at way too many Pittsburgh restaurants — Pusadee’s Garden doesn’t stand alone in this — but when serving meals designed to be shared, there should be plates to match. Pacing can be a bit off, too. On one visit, the grilled items came moments after we started small plates (of which the roti with sweet potato and shredded chicken in yellow curry was a real standout). Finding enough people to properly staff a restaurant right now is challenging across town; this restaurant is no exception, but I do hope that service will tighten up a bit over the next few months. 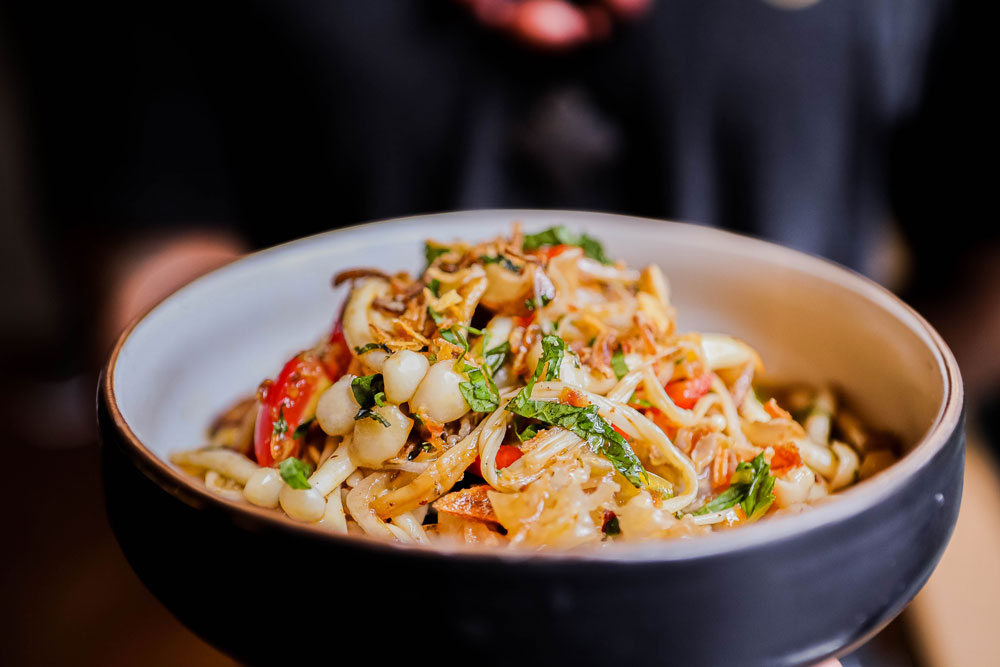 I’m curious to see how Pusadee’s Garden evolves from here. I recognize that the Tongdees and Johnson have to adjust for the fact that a good segment of Pittsburgh diners might not be willing to delve outside their comfort zones, and that many are coming in with expectations and favorites from the old Pusadee’s. But I also think the Tongdee family could further share their culinary roots with a few dishes if they wanted to — and a lot of us would be thrilled for the opportunity to embrace it. The menu will ebb and flow somewhat with the seasons, and this might offer a space to experiment with new offerings; for example, the pomelo salad I had in February presented the opportunity to get a little deeper into bitter flavors, especially since you can’t get a steady supply of fantastic pomelo here. In the same vein, the menu staple nam prik noom could use a bit of sour, acid or pungency to round out its smoke-forward flavor.

Pusadee’s Garden already is Pittsburgh’s most thrilling restaurant opening in years. And what they’re doing is working — Pusadee’s Garden has been the toughest reservation in town since the moment it opened and that shows no sign of letting up (tip: the restaurant holds back a few spots and you can score a day-of table or bar seat by showing up early). It also is so very close to being an out-of-this-world memorable experience. Why not lean into that just a little more?