The massive brewpub from Cinderlands Beer Co. shows potential as a dining destination. It isn’t there quite yet. 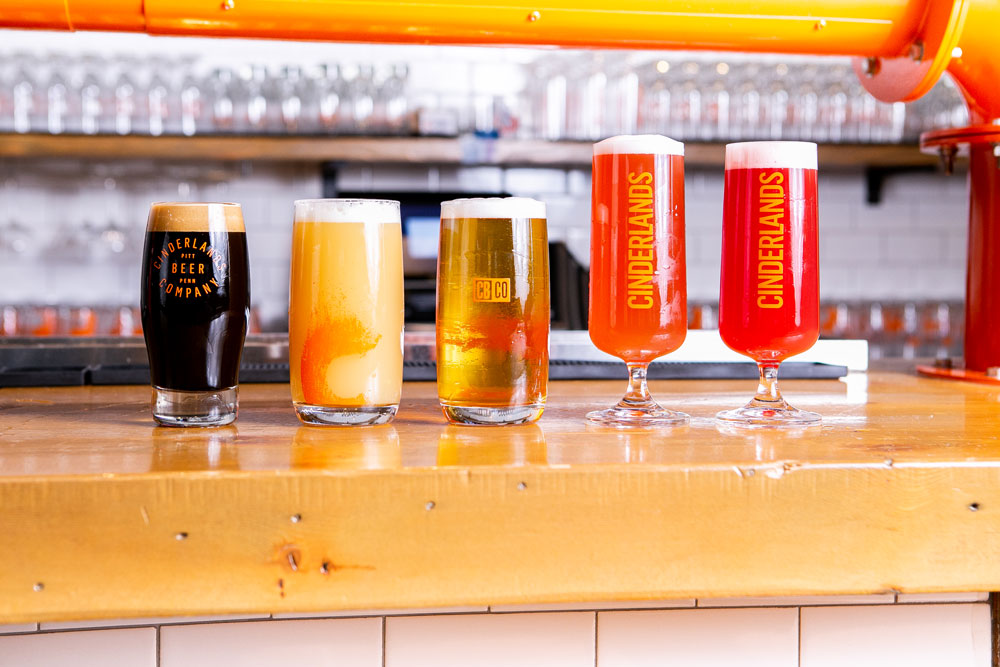 When Pittsburgh’s brewery-as-social-destination movement started in 2011, gastronomy wasn’t at the forefront. Following a relaxation in liquor laws that allowed for on-premise consumption, a brewery could comply with the regulation that something edible had to be sold with a bag of chips or similar salty snack. A few years ago, the dawn of the food truck trend meant that ambitious chefs could roll their concepts right to the brewery door. Some breweries even had trucks on a weekly schedule — a nice amenity, but one that left food taking a backseat to the beer.

Pittsburgh is on the cusp of a new era in which breweries combine forces with chefs to offer in-house menus that frame their establishments as modern-day gastropubs. Leading the charge is Cinderlands Beer Co. The operation started in late 2017 with a small Lawrenceville location (now Cinderlands Foederhouse) where you could find the sort of thing you might expect at a brewery restaurant — crushable sandwiches and the like dominated a limited, and generally excellent, menu. 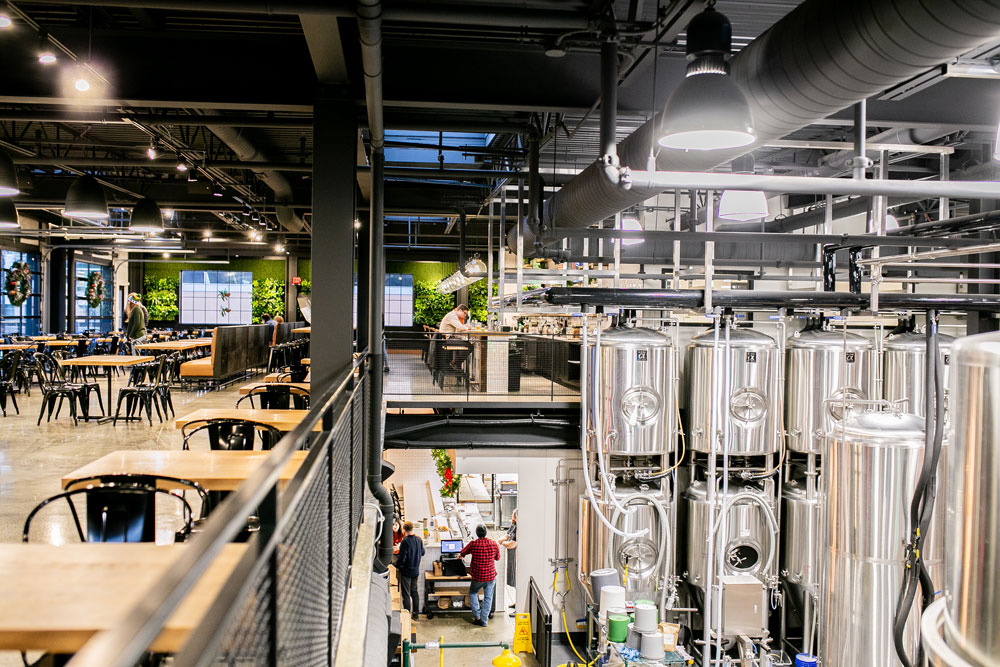 Cinderlands owners had something bigger in mind all along — a brewpub that would be the city’s largest in terms of both restaurant space and beer production. They oversaw an ambitious buildout of the former Spaghetti Warehouse space in the Strip District, calling the multimillion-dollar refurbishment Cinderlands Warehouse; it opened in May. The owners did their best to preserve the building’s historic, though crumbling, late-1800s brick exterior. Good for them for going the extra mile to maintain a beautiful piece of architecture, one that stands in contrast to some of the newer, less elegant builds in the rapidly developing neighborhood. Inside is brand new, though beams from the original building are used throughout the space. It’s a funhouse that appeals largely to a younger generation, but with room for 350 people, as well as an additional 60 seats on the patio, it also needs to please a crowd.

The flow on the first floor is a little off the mark. A big brown banquette in the middle cuts off the energy between the primary downstairs dining area and the vast open kitchen and small seating section. There’s a bar on the side that feels like a side thought and some beer-in-hand games that are a nice amenity. The whole space feels a little cold.

The upstairs area is more convivial. Here, you feel like you’re spending time in a contemporary brewery space. There’s a full bar, comfortable-ish seating and nothing that breaks the flow of energy. Unfortunately, the only time I was directed upstairs was for a mid-week lunch visit.

Joe Kiefer runs the kitchen. Formerly of Meat and Potatoes, Kiefer has been with Cinderlands from the start. With top-line equipment and a large back-of-house staff, his Strip District menu is significantly more ambitious than it was in Lawrenceville. At times, it shows a lot of promise. Too often, however, an inclination to reinvent a dish when refinement would be a better idea gets the best of him. What this means is a fairly incongruent and inconsistent menu. 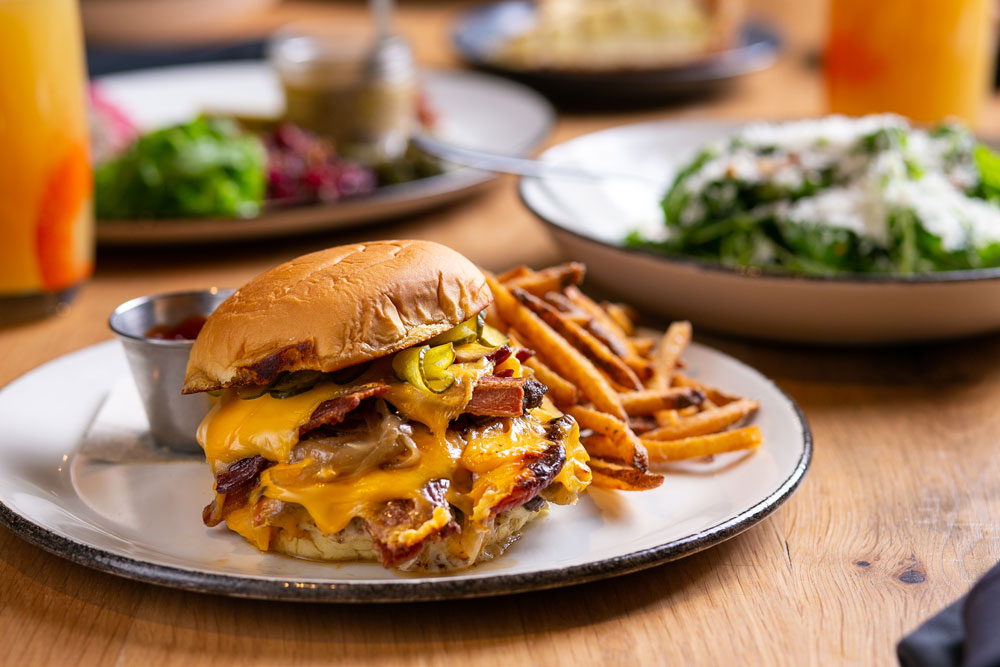 When Kiefer is on his game, he’s sending out some marvelous, beer-friendly food. Cinderlands hamburger ranks among the best in the city. A double stack of Jubilee Hilltop Ranch patties is funky and full-flavored in just the right way, griddled with lacy edges. Sweet and smoky bacon is cooked perfectly, housemade bread-and-butter pickles add a little bright tang, and caramelized onion dijonnaise provides a peppy dressing. Kiefer shows admirable restraint when it comes to cheese selection — American cheese isn’t cool, but it’s the proper cheese to drape on a burger.

A dish simply called “Pork” was, alongside the hamburger, my favorite offering on all of my visits. Pork shoulder, tender from the restaurant’s smoker and juicy with rendered fat, had terrific caramelization from being finished under a broiler; this is good cookery. Its house-made accoutrements, particularly pickled mango and kimchi, provided a nice counterpoint to the luscious meat, and I loved the romaine lettuce wraps, which allowed for interactivity in the assembly. I’d be thrilled if more dishes move in the direction of this one — full-flavored and not too fussy, yet interesting enough to go beyond the standard pub dish. 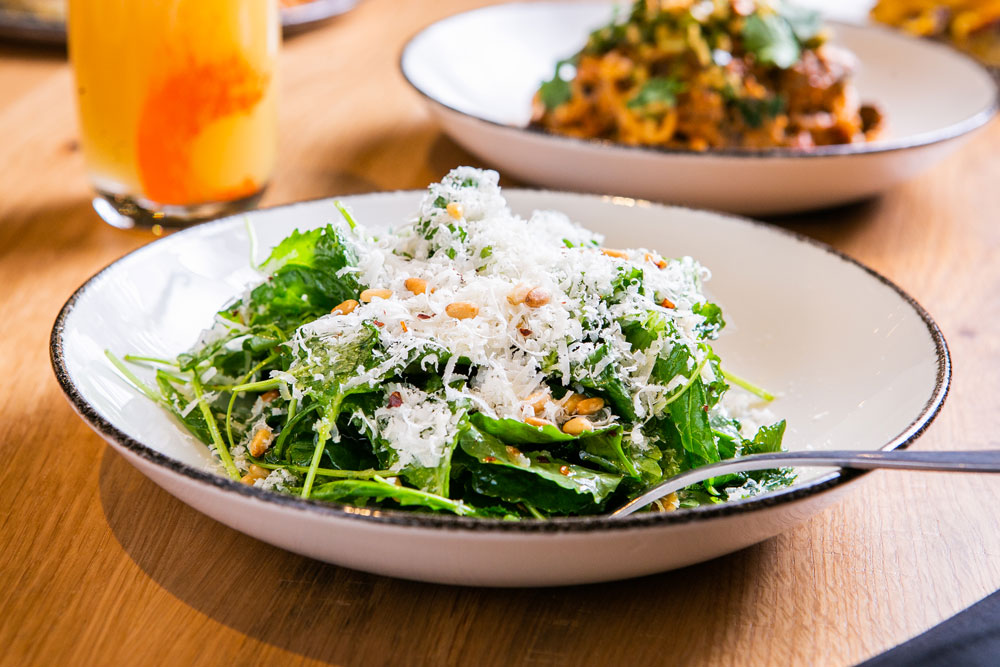 Then there are dishes that are well-executed but take unnecessarily weird turns. Goat Rodeo Dairy cheese curds, for example, are, in execution and support for local foodways, a beer-drinking dish as good as they come. Breaded and fried to perfection, the little nuggets are much better than the let’s-grab-these-from-a-freezer-section version still found at too many restaurants. But adding strawberries to romanesco takes what should have been a complementary dipping sauce into a curious realm where, somehow, you don’t want to eat all the fried cheese sitting in front of you because there’s a cloying fruitiness obstructing you and your joy.

Same for the Scotch egg. It’s a dish open for interpretation, but using chorizo rather than a more traditional pork sausage is too piquant a choice, too gummy, tacky and emulsified; you don’t get the juiciness that coarse sausage imparts. “It’s crunch, glue, yolk,” a friend said. Also using a tiny quail egg is a little cute for its own good — a duck or chicken egg would have allowed for a creamier yolk.

Some dishes are downright bad. Beet salad was an odd mix of beets, lavender wheat berries, Marcona almond brie, blueberries and plum vinaigrette. It felt like two salads mixed together: a grain and nut combination that tasted like eating flat cologne sharing space with clashing mix of blueberries and beets; blueberries made the beets taste too earthy and diminished their natural sweetness. All in all, it felt as if the kitchen were pursuing an idea that hasn’t been thoroughly tested. 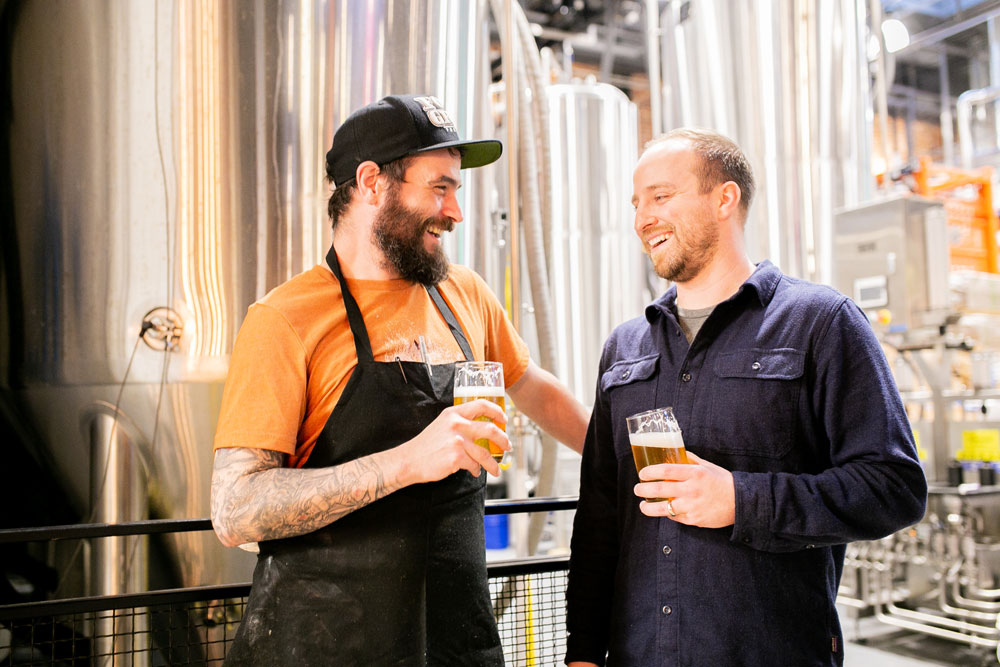 Cinderlands head brewer is Paul Schneider. He’s leading an ambitious beer program with a 15-barrel brewing system and production list that aims to please everyone from beer geek to casual imbiber. Overall, he’s crushing it. I’m not a fan of labeling classic, easy-drinking styles such as Pilsner as “Dad Beer”; nonetheless, brews such as Tracks Again, an unfiltered German-style pilsner, and Virgil Cain, a Vienna lager, are crisp, well-made easy drinkers that pair perfectly with food. Grizzled Canary, a low-ABV farmhouse beer, is another excellent beer perfect for enjoying with dinner. I like Schneider’s IPAs, most of which aren’t too aggressive. Trouble No More, for example, has a hoppy, bright nose, clear color and some bitterness from the Mosaic hops that is mellowed by Strata hops; you get pine and citrus and cheerful happy in this well-balanced beer. His sour beers, tart and low in alcohol, are a strong foil for the restaurant’s richer dishes, too.

American beer is deep in an over-the-top, anything-goes moment, in which beer that would likely not be recognizable as beer by Pittsburgh’s foundational brewers are rising in popularity. Cinderlands offers a menu category called “Out There,” where you’ll find permutations such as Star Crumb Key Lime Pie, a Tartshake IPA brewed with key lime, graham cracker, cinnamon, Madagascar vanilla bean and milk sugar. It tasted like slightly malty lime dessert, and it started a spirited “What is beer? Do graham crackers belong in beer?” debate at our table. People who loved it really loved it, and those, like me, who didn’t enjoy drinking it still agreed it was fairly flawless in execution, even if we wouldn’t personally want to order it again. 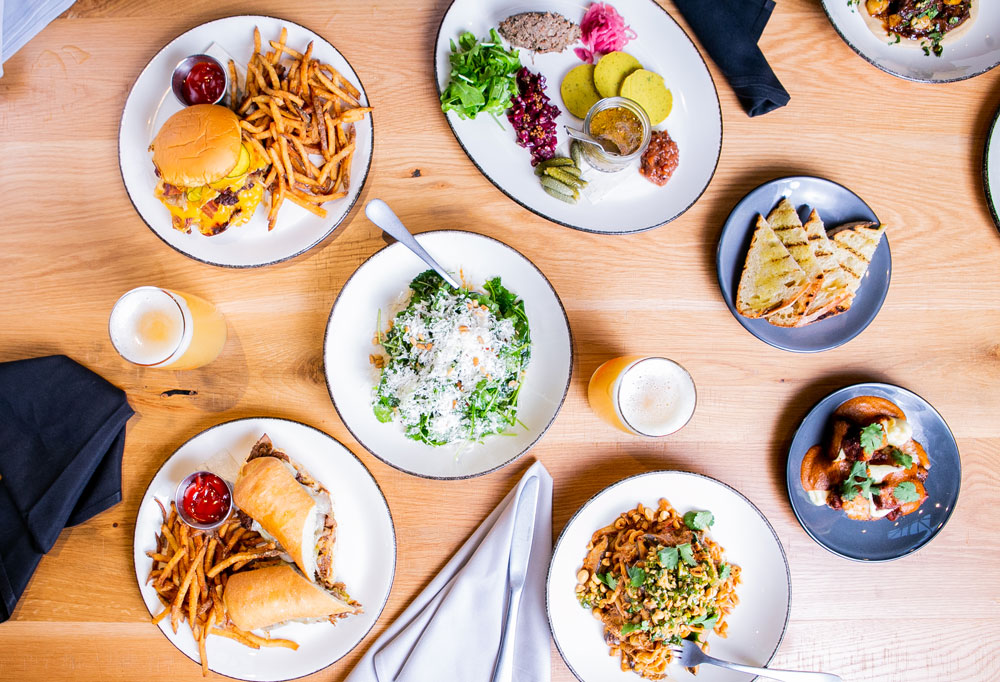 As much as I enjoy the beer, the more I visited Cinderlands Warehouse, the more I wondered what might draw me back for a meal in the future. Perhaps if the menu had a bit more of a through-line, I’d be into it. The try-too-hard items don’t feel right for the space and, at least with the ones I tried, they don’t really work. I’d love to see Kiefer strike dishes such as an over-conceptualized beige-on-beige-on-beige squash dish in favor of continued, tested refinement of his gastropub food such as his slightly spicy and smoky, very tasty spin on a cheesesteak or a fried cod that was a little more messy and muddled in flavor than it needed to be. Then, we might just have a winner.