On the shoulders of hometown hero Britt Baker, the long history of the Steel City and pro wrestling gets a raucous new chapter. 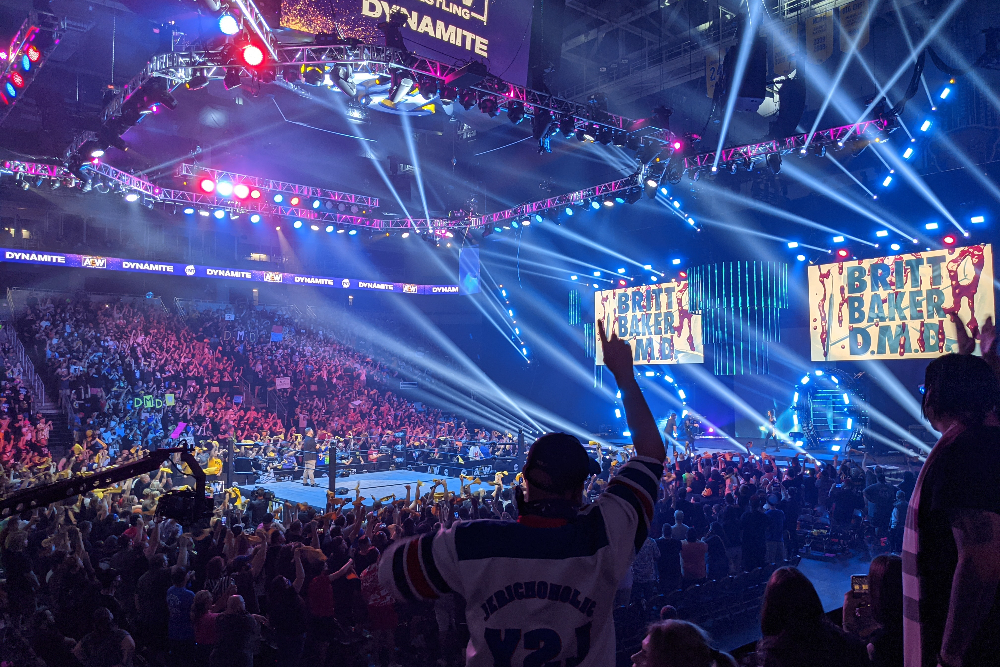 Pittsburgh has always been a city that loves wrestling.

Fans with long memories can tell you about the glory days of “Studio Wrestling,” hosted by “Chilly Billy” Cardille, and sold-out crowds packing the Civic Arena to see Bruno Sammartino. In the late-’90s heyday of the then-WWF, fans gathered in the same building to see one of the most indelible moments in pro-wrestling history: Mick “Mankind” Foley, who himself learned to wrestle in the Pittsburgh area, being hurled off a massive cell by The Undertaker before crashing through a table on the arena floor. At the same venue a few years later, hometown hero Kurt Angle would win a world championship before an ecstatic crowd, some of whom mobbed the ring to celebrate.

For a while, though, the Pittsburgh wrestling tradition receded from the public consciousness. The rebranded WWE kept coming, but crowds shrunk. In 2014, WWE broadcasted one of its biggest annual events, the “Royal Rumble,” from PPG Paints Arena. Dissatisfied with the stories being presented, fans began to boo; a title match between John Cena and Randy Orton was thoroughly razzed, with the crowd only cheering when another wrestler interfered to end the match. The main event, an extended battle royal, ended in a shower of jeers.

The casual fan would certainly think that Pittsburgh no longer cared much for this stuff. Simultaneously, however, a young crop of wrestlers was learning the craft in local rings. Plucky independent organizations were showcasing fresh new talent, and smaller-scale shows — some even with the WWE brand — in intimate venues were finding a dedicated audience.

All the while, a University of Pittsburgh dental student was honing her skills. In 2015, Britt Baker had her first match with longtime local organization IWC. Six years later, she’d lead All Elite Wrestling (AEW), a nationally broadcast, increasingly popular company, to Pittsburgh for two nights of rapturously received pro wrestling — in the process becoming the heir apparent to Pittsburgh’s wrestling tradition.

Bruno Sammartino, Kurt Angle, Britt Baker. If the reaction at the Petersen Events Center last week was any indication, listing her alongside those names is very appropriate.

“If I am the torch holder right now, I’m happy to be in that position,” Baker says. There are other Pittsburgh-bred wrestlers on large stages; her fellow AEW performer Wardlow is also an IWC veteran, and WWE talent Elias and Joaquin Wilde developed locally. For Baker, though, her Steel City origins are a part of her character. “I bleed Black and Gold. I wear the colors loud and proud, everywhere I go … I love Pittsburgh. I’m so proud of this city.”

When fans arrived at the Petersen Events Center Wednesday for a broadcast of AEW’s “Dynamite,” they found yellow towels emblazoned with “Brittsburgh” for sale at merchandise tables. (The towels were also distributed for free to fans with floor seats.) When Baker emerged for an in-ring interview, the fans erupted, waving towels as if it were a Steelers game.

It was a far cry from the sleepy crowds at some shows over the past two decades. Fans at “Dynamite,” which is broadcast on TNT, reacted vocally for every match — chanting, cheering and sometimes performing full-throated singalongs with wrestlers’ theme music.

Baker says that the success of smaller-scale shows has developed an appreciation among local fans. “Pittsburgh has a big core [of] independent wrestling fans,” noting similar reactions for both IWC shows and stops at Stage AE by groups such as Ring of Honor and WWE’s niche offshoot, NXT.

She also believes that AEW is attracting newcomers. “I’ve had a lot of fans tell me that their first-ever wrestling show was an AEW one,” she says. “The feeling they had when they were in the arena was something they couldn’t describe.

“I think the AEW crowd is just growing. Look at our TV ratings, our demographic ratings — we cleared a million [viewers] a couple of times in a row … All across the world, people are really catching on.”

“Dynamite” wasn’t a one-night stop for AEW at the Pete. Two nights later, the group returned for the premiere episode of “Rampage,” a new, Friday-night broadcast also airing on TNT. (Both shows will switch to TBS in 2022.) For the debut of “Rampage,” AEW scheduled a match guaranteed to set the crowd afire: A title defense by Britt Baker, in front of her hometown fans.

Red Velvet, a younger competitor with AEW, challenged Baker for the title in the main event of “Rampage.” Velvet was game for the contest, but Baker performed like a superstar; the crowd responded in kind, repeatedly chanting “here we go, Brittsburgh, here we go” to the cadence of the recognizable Steelers chant.

Baker, of course, emerged victorious. After the show went off the air, AEW founder Tony Khan emerged to thank the Pittsburgh crowd for giving AEW such a warm welcome.

When Baker and AEW next return, there’s every reason to believe the response will be every bit as enthusiastic and just as vocal as if it were Sammartino or Angle stepping between the ropes. The Pittsburgh wrestling legacy may have experienced a bit of a drought in the early 2000s, but — on Baker’s shoulders — it seems that it is in fine form in 2021.

Meanwhile, new homegrown talent is eager to join in that tradition. “There’s so much talent in Pittsburgh,” Baker says. “Anytime I can, I come home and watch an IWC show … They look the part, they wrestle the part.” Who should local fans keep an eye on? “My debut match was a mixed tag with Andrew Palace as my partner,” she says; Palace is the current IWC heavyweight champion. “That’s somebody I would love to see on the big stage one day.”

For at least one night, she got her wish. As AEW taped matches for its online-exclusive programs, “Dark” and “Elevation,” Palace turned up to showcase his skills. A bevy of other local talent did, too, including Katie Arquette, Ray Lyn, The Mane Event and Lee Moriarty.