The Mane Event stays motivated through the pandemic with the promise of a dream. 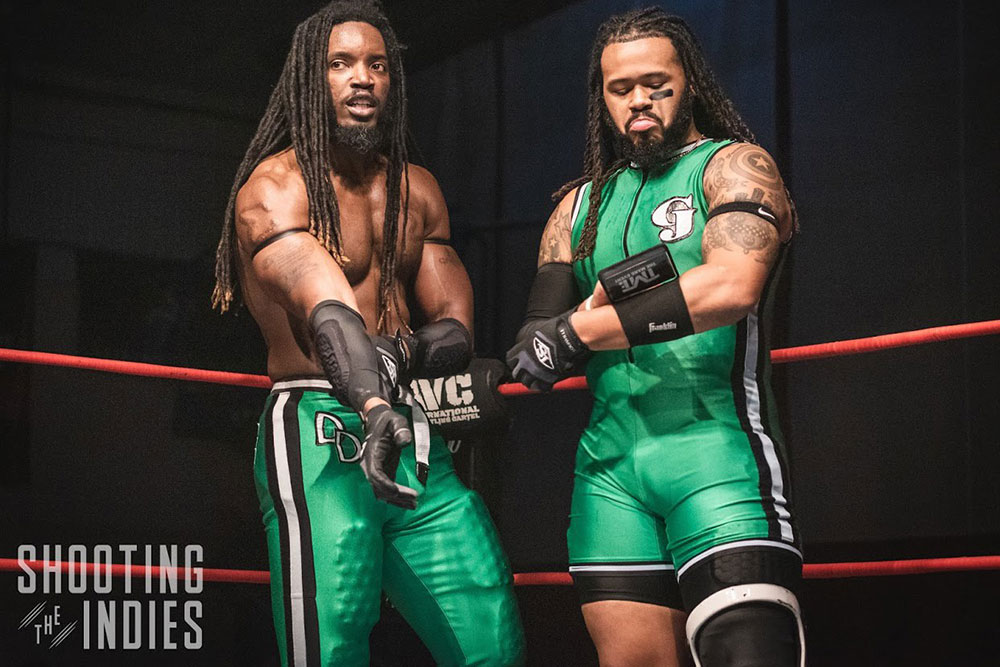 PHOTOS COURTESY OF THE MAIN EVENT

As a wrestling tag team, Pittsburgh’s The Mane Event – Ganon Jones Jr. and Duke Davis – look like superheroes. Tall, with long dreadlocks, smiles that are equally endearing and intimidating, and an almost otherworldly ability to anticipate one another’s moves and take the bad guys down, the duo’s story is as magical as their presence in the ring.

Both are fathers of 3-year-old daughters. Both gleaned their love of the ring (both wrestling and boxing) from older women relatives — an aunt or grandmother. Their undercover jobs, in finance and mortgage, are as peaceably Clark Kent as it gets. And they both miss the small joys of the road — long talks, gearing up, and gas-station chili cheese dogs. 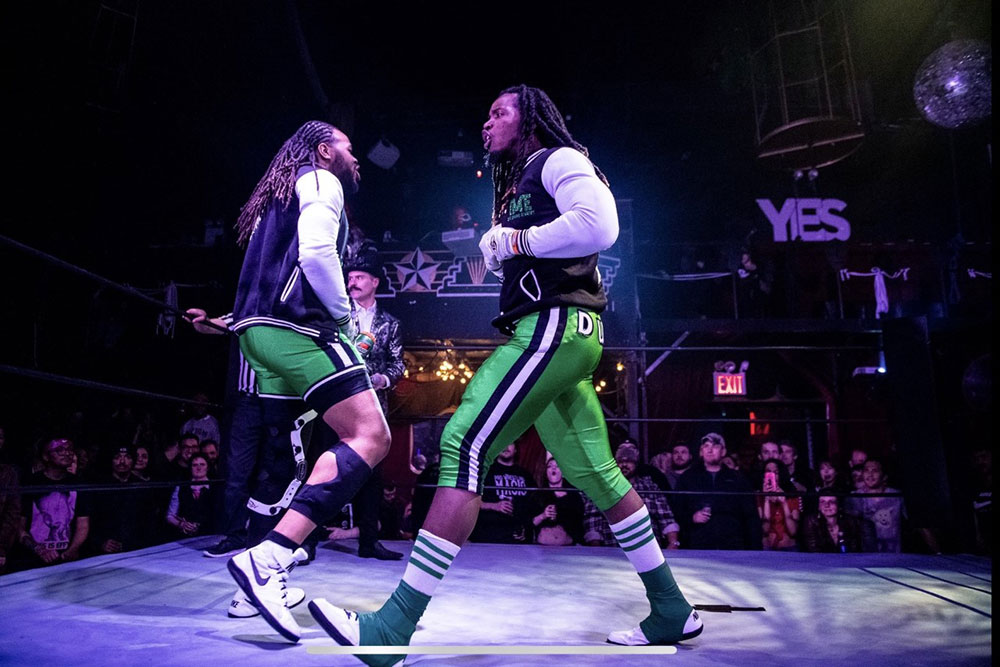 Right before the COVID pandemic hit, The Mane Event had a tryout with Vince McMahon’s WWE, the dream of a lifetime. It’s a memory and a promise that has kept them motivated through lockdowns and more.

A quote Duke keeps on his Facebook page — “Stay hungry” — sums up that motivation. 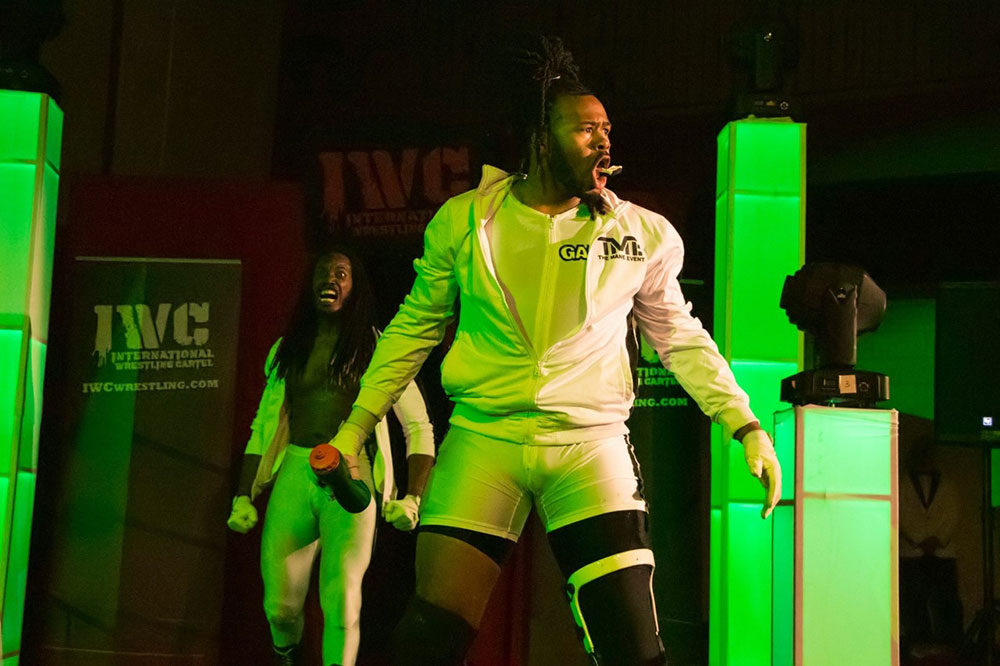 Ganon:
March came and we had a big show. We heard the rumblings of shutdowns, and it sounded like a farce. Then the owner of the International Wrestling Cartel [IWC], Justin Plummer, pulled everyone aside and said, “This might be it for a while, and if this is it, I want you guys to go out there and leave a lasting memory on these folks, because who knows when they’ll see you again.” All of our shows after that were canceled.

Duke:
There was a huge turnout for that show, which we were not expecting because fans were hearing what we were hearing. People were scared. But people came out. I think they were thinking if this is the last time, let’s go big. Let’s make a memory that will last.  We had just come back from our WWE tryout in December and we felt like we were about to catapult to another level. I remember joking with one of the other wrestlers, Ethan Page, “Hey, I’ll see you in September.” We haven’t seen him since. 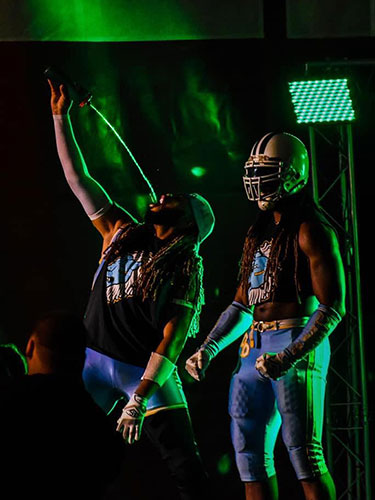 Ganon:
Once you get a trial at the WWE, you’re in their system. We got our feet in the door, and now it’s up to us to continue to grow, once the pandemic clears up and we’re free to do it.

The WWE has always been a dream for us, for me. I fell in love with wrestling when I was 6 or 7. I’d go over to my Aunt Eva’s house. She loved wrestling, specifically Lex Luger. She loved the bad guys. She thought Lex was so handsome and muscular. I’d get a rise out of cheering against whoever Lex Luger was wrestling. It drove my aunt crazy and I loved it.

It wasn’t until I was in high school when I thought this might be something cool to do. My sophomore year, a wrestler named MVP debuted. I thought he was the coolest guy ever. And suddenly I didn’t want to be just a fan anymore. It took me a few years to get serious. I was 23 — after I went to college and did the things — before I started to train and wrestle for real. Three or four years later I met Duke, and that was it.

Duke:
People are going to think this is really cheesy, but Ganon and I, we have the same path. My grandmother loved wrestling and when I say she loved wrestling, she really loved wrestling. She would go to the shows. … She’d scream her lungs out and get crazy. The first wrestler I ever saw was Ric Flair. And I was like, is this guy for real? Why is he screaming like that? What is wrong with him? I loved it. My grandma loved it. She got me hooked.

Ganon:
My grandma didn’t love wrestling, but she loves boxing — she’s a huge Muhammad Ali and Joe Frazier fan — so she wasn’t into wrestling but she still likes seeing guys with their shirts off beating each other up. I don’t know what it is with older women in our families loving wrestling and boxing, but I’m glad it was a thing.

Duke:
My grandmother, yes, but my mom isn’t a wrestling fan. Still, when my mom saw I loved it, she gave in and bought me the shirts, the wrestling figures. And then one day I was like, “I want to be a wrestler.” I was maybe 7 and my mom took me to school and signed me up and I started wrestling. A few years later, though, I stopped. I started football. I watched wrestling as a fan, but I wanted to go to the NFL. I had a trial with an arena league, but then I started to realize this wasn’t what I wanted to do.  Later, when I was about 23, I watched a Dave Bautista documentary. He talked about starting wrestling when he was 30. And I remember saying, that’s not going to happen to me. And then nine years later, I’m 32 years old, and I’m at a wrestling tryout for Stronghold Wrestling Academy and pretty much was like, now or never. A year later, I met Ganon. And we joked — hey, we have long hair, dreadlocks, and like, woah, nice look, we’d make a cool tag team. And we were mostly kidding, but a year later, we started to talk for real and decided we needed to do this. The stars aligned and we formed our first tag team, Locked & Loaded, in 2017. And the rest is as they say. 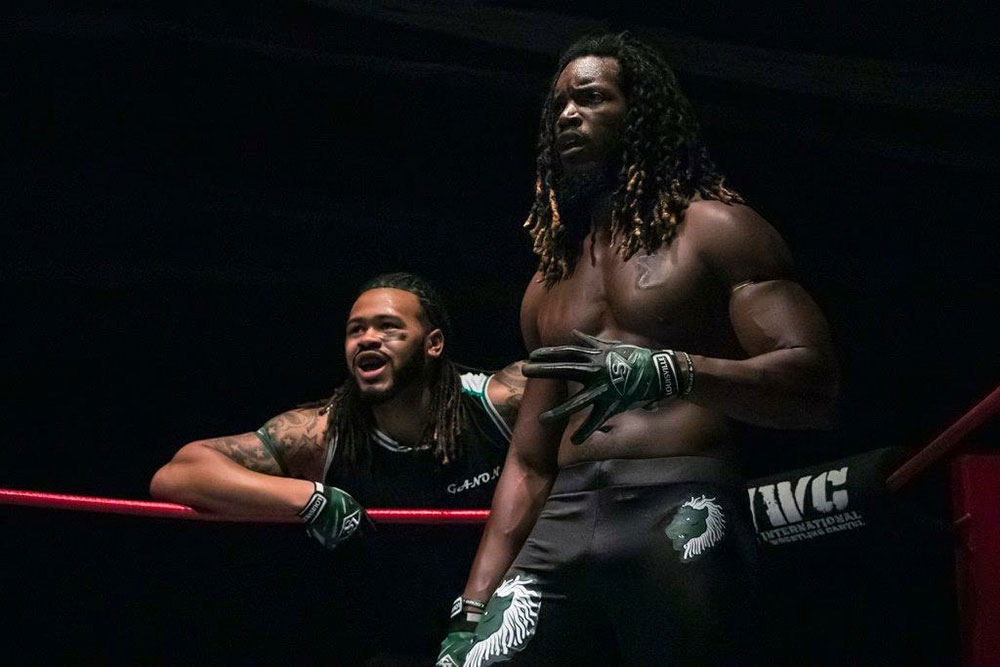 Ganon:
For tag-team partners, it’s important for the chemistry to be right. We talk every day, but it’s usually never about wrestling. We talk about our daughters. We’re both helping raise 3-year-old girls. I’m married. Duke’s engaged. We have so much of life in common. Family is so important to both of us. The saddest thing in the pandemic for me was one day, my daughter was playing house with her dolls. She was being the mom. She had her own little babies. And she was like, ‘“Alright, we’re going out now. Oh, wait, hold on, I have to get all your masks on.”’

That’s not something a 3-year-old playing house should be ever thinking about. But she went and put these little napkins over her dolls’ faces, and said, “OK, we can go now.”

I really hope this ends for everyone’s sake, but for my daughter’s sake and Duke’s daughter’s sake and everyone’s kids’ sake most of all. But you know, when you’re a kid, things don’t seem to bother you as much. And that’s a beautiful thing, maybe. As adults, we can’t escape the world, but kids can act like it’s a thing that they can get around or over.

Neither of our daughters has seen us wrestle yet. My daughter knows I wrestle. She always asks when we have a show if I’m going with Uncle Dukey to beat up the bad guys. She thinks we’re superheroes who beat up bad people. In 2020, we’ve been hit from all sides, not just the pandemic. There’s so much going on. And so when my daughter says, ‘Did you punch the bad people?’ I can tell her, yes. We’re faces, which in wrestling means the good guys.

When I come home from a show, my daughter asks me, “Did you punch the bad guys? Did you kick them and punch them and make them pay?”

And she says, “All right then.” Like the world can go on from there.

Lori Jakiela is the author of the memoir “Belief Is Its Own Kind of Truth, Maybe” and several other books. She lives in Trafford and directs the Creative and Professional Writing Program at Pitt-Greensburg. For more, visit lorijakiela.net.  If you know someone who would like to share their story, or if you’d like to share your own story for this new monthly series, reach out to us at pghstories@gmail.com.

Categories: Stories of Our Neighbors