Pitcairn caterer Jeremy Knauss gets fired up about family, good food and the neighborly art of stoop soup. 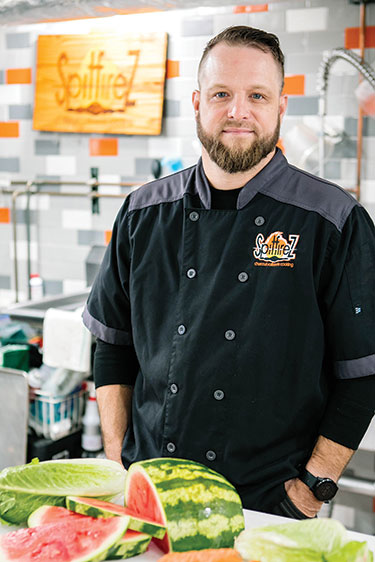 Jeremy Knauss runs SpitfireZ Catering out of a private kitchen in Pitcairn, one of Pittsburgh’s old railroad towns. He prepares artisanal rotisserie meats — ham, turkey, lamb. And he makes soup.

A lot of soup.

“Soup for everyone,” he says, laughing. “I never want to be the Soup Nazi from ‘Seinfeld’ — ‘No soup for you!’”

Knauss lives — and works — with his wife, Susan, and their 7-year-old son, Jaece, in the same Rust Belt neighborhood where he grew up.

“It’s been our dream,” Knauss says. “This is home, simple as that.”

My stepfather was an executive chef at the Allegheny Club. There was a hamper in the bathroom where he put his chef’s clothes. It stunk so bad, all fish and grease. There’s a picture of me, 7 years old, stabbing a big hunk of meat and putting garlic cloves in it. I swore I would never work in food.

So I work in food.

I graduated with an arts degree from Pittsburgh Technical Institute, but there were no arts jobs. A guy I’d known had a catering business called Have Spit Will Travel. He was a tax accountant. In winter, he needed help with his tax business. In summer, he needed someone to help cook pigs. I did both. 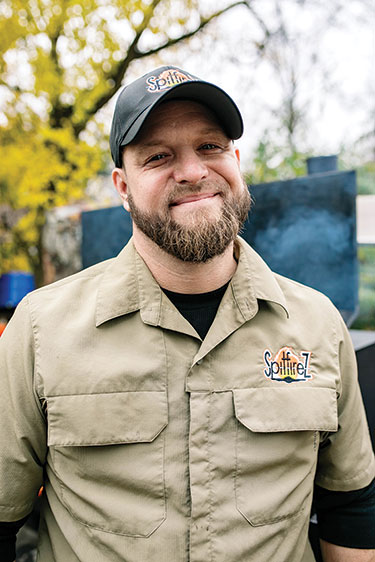 One thing I learned doing taxes — money is a trap. You have to do something you love.

No one gets into the food business for money. When you average out your hourly wage, it’s pretty depressing. But I get a kick out of watching people eat food I’ve made. I love being at parties, talking to people. I love the way cooking allows you to connect with people and be creative.

When you’ve made something good, seeing people enjoy it — you don’t even have to hear them, just sit back and watch them gesture — that’s the best.

What’s food without love put into it? Everything we make, we really cook, every sauce, every bite. The flip side of that — when I first started, I’d look in garbage cans to see what people threw away. People are kind. They’ll say, “Delicious!” but then you see a bunch of the same thing in a garbage can at a party. Big fail.

Flash forward 14 years. Same guy, Drew, called us to do his family reunion. He said, “Do you remember me?” And I said, “Of course I remember you. I messed up your pit potatoes.”

I started in the business by selling quarts of soup on Facebook. It’s hard to get good soup. Canned or bagged? That’s not soup! There’s no love in that. I still do a lot of soup for fundraisers. My Italian wedding soup is the best, and I say that with all humility. We did a fundraiser for a dance studio last year, our biggest ever. Over 500 quarts of soup. Fifteen 5-gallon buckets. I delivered so much soup. It was overwhelming. At my soup peak, I was delivering 140 quarts of soup a week.

Everything runs through a website now. We have a form. People order. They pick it up. If Art “The Chief” Rooney called, he’d have to fill out the form. It keeps life manageable. 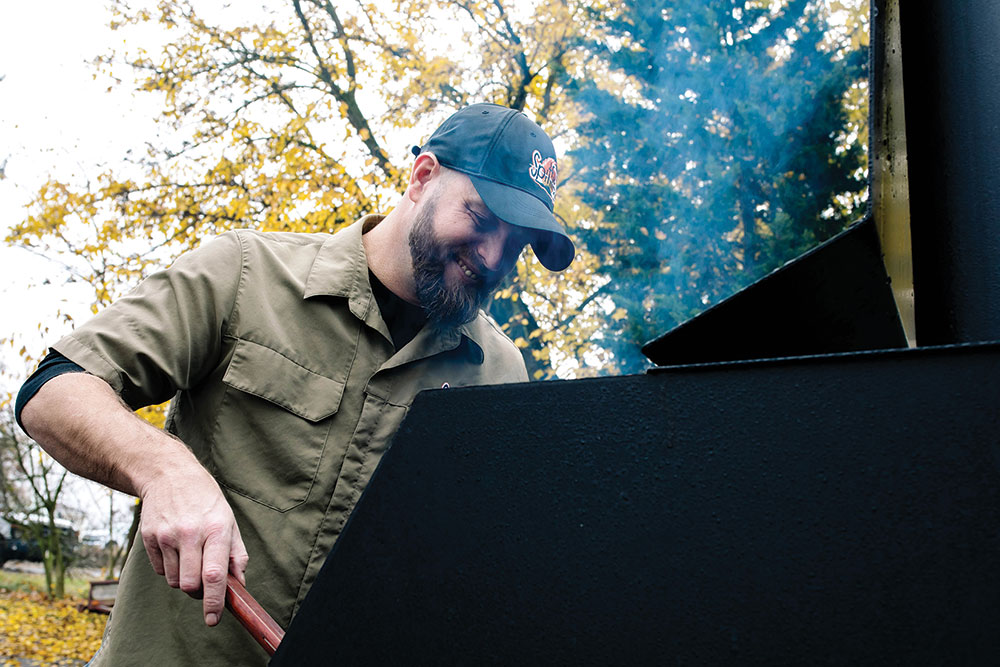 People love our ham. I’m a ham guy. And turkey, though we’ve been having supply-chain issues. I’m getting nervous. People need that holiday turkey.

I still get together with my art buddies once a month. We call it Drink and Draw. We draw together and remind each other there’s this other thing we love. It’s really hard to go on as a creative person in this life. I feel like the world just tries to suck the creativity out of people. And being creative is what makes us human. So my art friends and I, we try to keep ourselves keeping on. We try to keep our knives sharp.

I do a lot of drawing for my son now, for all the kids in our neighborhood. We have like 13 kids on our street. They give me homework. They tell me what they want and I’ll draw it — Ninja Turtles, Darth Vader. I’ll give them homework, too. I always tell them there are no rules. Use a crayon, a pencil, a pen. Mix it up. Use whatever you have. Make something that makes you happy.

Cooking is like that, too. No rules. Let’s play.

My little brother’s with me now. He’s a butcher. We make sausages. We make lasagna. We make meatballs and pierogi. We experiment a lot. Next we’re putting a pizza oven in the backyard.

My son likes to cook, but he’s built for middle management. We’ll all be in the kitchen and he’ll come in and tap us on the back and say, “Good job, good job.” Then he’ll go back into his room and play video games.

He eats only macaroni and cheese and chicken nuggets. I tell him, “Look, we’re cooks. Professionals. What are you doing?” He’ll say, “Good job!” and ask for mac and cheese. If it’s not spirals, he won’t touch it.

When I was growing up, my favorite food was spinach balls. My grandmother made them, that’s why they’re still on the menu. That’s why I give them to our neighbors and all the people I care about.

What I love most about this work? Being part of families’ lives. I’ve done people’s weddings, their baby showers, the christenings, the graduations. I’ve watched their kids grow.

The biggest compliment is that these people think I’ve done a good enough job to keep me coming back. They’ve invited me in and shared these moments with me. It’s been my great privilege and honor.

Lori Jakiela has a new poetry collection, “How Do You Like it Now, Gentlemen?” and has written several other books. She lives in Trafford and directs the Creative and Professional Writing Program at Pitt-Greensburg. For more, visit: lorijakiela.net

This article appears in the December 2022 issue of Pittsburgh Magazine.
Categories: Stories of Our Neighbors