Stories of our Neighbors: Our Lady of the Ring

Writer Lori Jakiela climbs into the ring with wrestling champion Katie Arquette, who brings an aura of Hollywood magic to the International Wrestling Cartel. 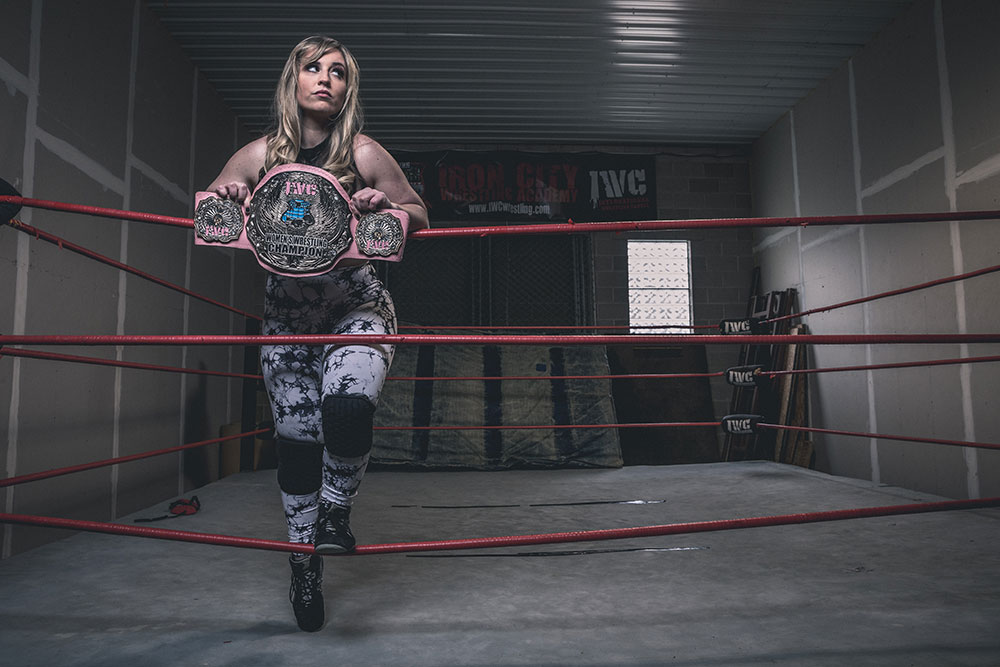 International Wrestling Cartel (IWC) Women’s Champion Katie Arquette, aka The Queen of the Silver Screen, makes a dazzling entrance — fur coat of indiscriminate animal origin fluffed around her muscular shoulders, a Hollywood clapper board set for action, a flank of paparazzi she spurns with a wrist flick.

Since 2017, Katie’s link to actor and wrestling aficionado David Arquette has brought Hollywood mystery into the ring for Pittsburgh-area indy wrestling fans. These days, though, Katie (whose real name is Katie Cerda, but please don’t tell the kids), 25, has worked hard to keep that Hollywood magic alive, both for her fans and herself.

Born in North Carolina, raised in Greensburg, Katie now lives in Pittsburgh. A theater major from California University of Pennsylvania, Katie lives for the fan interaction that wrestling offers.

When we talk via Zoom, her glamorous fur coat and her IWC championship belt hang on a wall behind her, waiting.

For Katie, from the very beginning, wrestling was about not only magic but endurance.

“One day my older sister was watching wrestling, and the wrestler Kane was on. I was hooked. I was like, ‘Who is that?’ and my sister told me his story, how he was brothers with the Undertaker, and he was fire and darkness. I thought he was just wonderful. I couldn’t imagine how someone like that existed, how he survived. I wanted to be like Kane.” 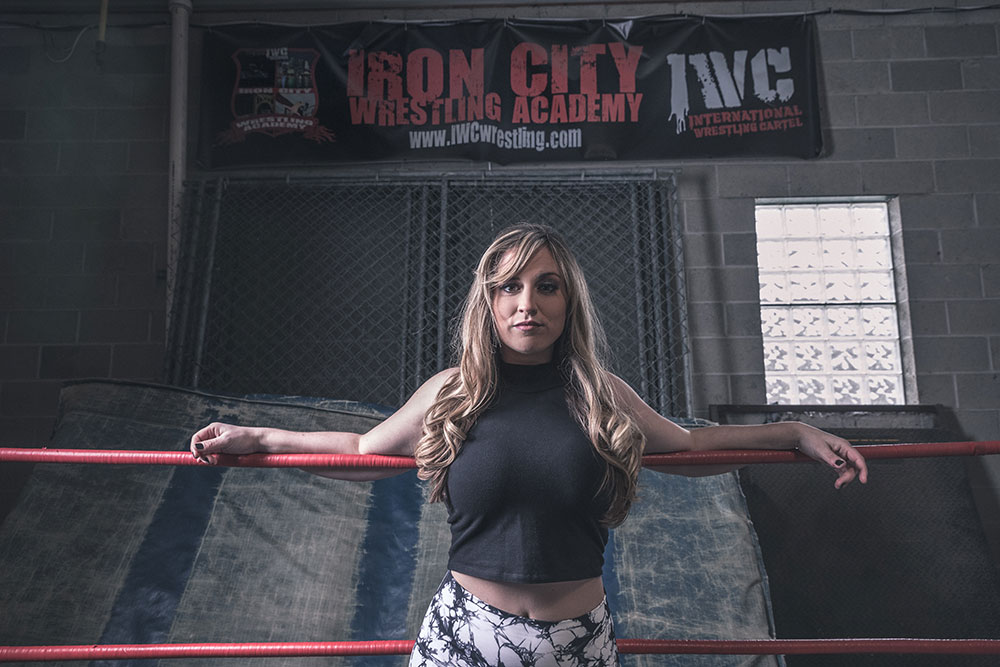 I’m still on the Independent circuit. I’m not signed anywhere. I’m all by myself. But this year, I had opportunities to travel and broaden my horizons. And I wasn’t able to do that. IWC is my home, and they are number one, always. But my dream is one day to be able to make a living wrestling, and that means getting out there, which was impossible this year.

For wrestlers, home is the gym. Now home is the gym. YouTube became my best friend in quarantine. I invested in some workout bands, a barbell, a dumbbell. I triggered some muscles I didn’t know I had. The downtime allowed me to focus on other parts of my life, too. I’ve been able to reach out, talk to family and friends more. Even though I spend a lot of time alone, things feel in some ways less lonely.

I live with my boyfriend. He is a wrestler, too — I’m not going to say who — and we met through wrestling, at IWC. A wrestling love story. So I have someone here, someone who really gets it. But it’s been bittersweet. It’s been really meaningful to me to spend more time with my significant other, with my dog, Bear, and just to be able to analyze my life a bit — where I am, where I want to be.

It’s a strange thing, wrestling, I know, but I love it so much. When I was young, I let it go for a while, but then I got to college, and my friends were big wrestling fans. One night we were watching Monday Night Raw and Kane came on. I was stunned. He was still wrestling, still surviving. And maybe right then I decided to train at IWC and do this thing. I trained in 2016 and started wrestling in 2017.

I think people love wrestling because everyone loves seeing a good guy and a bad guy. Everyone needs a story to hold on to, to help us escape, maybe.

I love theater and being on stage, but the ring is my favorite stage to perform in and I want to perform in it as long as possible. It’s live. It’s improv. But even more than that it’s being out there and having fans react to what’s going on with you. When you make eye contact, they feel like they’re part of something because they are. You feel like you are part of something larger because you are. In wrestling, there is no fourth wall.

IWC fans are so passionate, so limiting the number of fans during the pandemic was hard. But in our last few shows, when we had to keep the numbers way down, it felt like everyone had been missing it so much it sounded like there were 1,000 people instead of 100. When there’s finally room to breathe, I think wrestling is going to come back bigger than ever. People need a release. We need something to cheer and boo and bring us together.

You know, I love the indy circuit and I would also love it if Vince McMahon gave me a call and said, “Hey, you want to try out?” I would love to be on TV. The only thing I’ve ever wanted is to make money off of being in a big square box and making people laugh and cry and hate me and love me. Love me, maybe, mostly that.

When I met David Arquette, he was one of the humblest and most down-to-earth humans I’ve ever met. The fact that someone like me just decided, Hey, you know, the name Katie Arquette has a nice ring to it. But then to have it work out? That’s magic.

I was in a cage match in August 2017. Leading up to that, a friend tweeted about the match and tagged David Arquette, asking who he was rooting for. David responded, Let’s go Katie! And it kind of blew up from there. 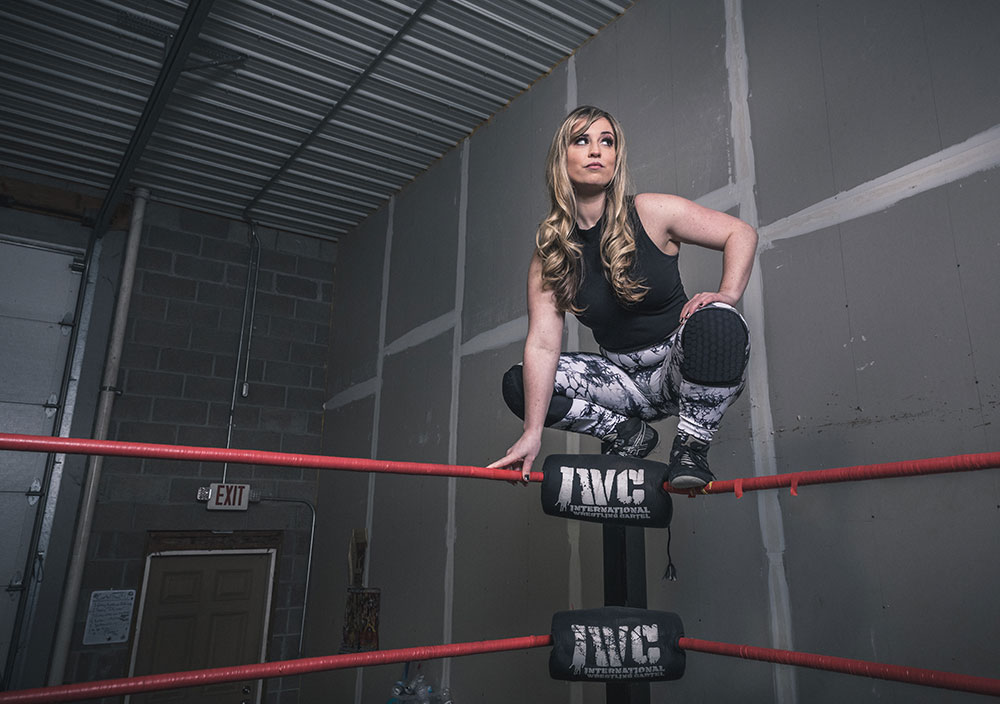 The IWC owners and other people asked me to reach out to David and I kept explaining I didn’t know him. I finally messaged him on Twitter. I said, ‘Hey, would you maybe want to come to maybe a match like this?’ I didn’t expect him to respond, but he did. He said, ‘Hey, thanks. I’m not going to be able to make it, but I could cut a promo if that would help.’ And he did. And it did.

After that, things kept building. In November 2018, the day when I first won the IWC title, David got in touch and said, “We got done with filming early. I can make it.” And he showed up and gave me the fur coat in the ring. I wear that coat to this day as part of my character. It feels a little surreal, a bit of Hollywood magic.

Wrestling’s all about magic. Good versus evil. I think we all need magic in our lives. We shouldn’t ever give up on that. We shouldn’t ruin magic, especially for the kids. When I think about what wrestling gives people, it’s that: a chance to believe in something again.

This article appears in the March 2021 issue of Pittsburgh Magazine.
Categories: From the Magazine, Stories of Our Neighbors