Our 50 Years: Myron Cope on Sports

In the earliest years of Pittsburgh Magazine, we didn’t quite know how to cover sports — so we just let Myron Cope say whatever he wanted. 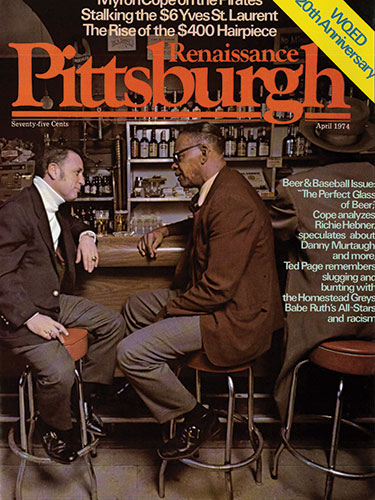 As another Steelers season dawns — we cover the team’s future in our “Alone in the Huddle” feature, beginning on p.52 — I looked into the archives to try to find some of our early sports coverage.

We were born a periodical focused on the fine arts, publishing poetry and exhibiting an alarming level of concern over weekly radio programming. Sports was, initially, barely in our bailiwick. The first athletic coverage I can locate is in our October 1970 issue; it’s a lovely account of the steeplechase races at Rolling Rock by the magazine’s founding editor, Mary Lynn Menair.

“Once again the horses will make that final breathtaking jump and then bear down upon us,” Menair wrote. “Their coats will still glisten as they thunder past to the finish, spent and wholly magnificent in the bright splendor of an October day.”

That is, no doubt, some lovely equine rhapsodizing. I would argue, however, that the National League Championship Series between the Pittsburgh Pirates and Cincinnati Reds, which was also occurring that month, probably also warranted coverage.

We eventually got around to the national pastime. Our April 1974 cover announces the “Beer & Baseball Issue,” and the photo certainly supports that moniker: Myron Cope and Negro League great Ted Page are depicted sharing a beer at the Squirrel Hill Cafe.

Cope’s contribution, and the nominal cover feature, is an analysis of the Pirates’ prospects for ’74 — a job that the late writer and broadcaster was too pragmatic to fully embrace. “But what of the upcoming season? I have dwelled upon possible pitfalls, but that is only because of a philosophy that it’s ridiculous to predict a club’s finish sitting 162 games away from the finish line,” Cope wrote. “I like [the team’s] chances as well as I’ve liked any Pirate team’s chances — on Opening Day.”

Cope was willing to criticize, of course, and didn’t spare Bucco favorite Richie Hebner. “His mind, whether it be on his next date or on a heckler in the third-base stands, seems to require constant flow when not otherwise absorbed by action on the field.” Perhaps Cope could predict the future; Hebner posted a career-high 28 errors that season.

Page, meanwhile, reflected on his time in the Negro Leagues, including stints with both the Pittsburgh Crawfords and the Homestead Greys. The account contains some excellent pieces of oral history. Page, for example, was utterly unfazed by his occasional teammate, occasional rival, Satchel Paige, in spite of the latter’s reputation as among the best of all time. “Now to me, Satchel wasn’t the best right-handed pitcher we had, because I killed him,” Page wrote. “Satchel had nothing but a fast ball.”

As for the sudsy half of the Beer & Baseball issue, it’s thorough, at least; writer Timothy Wilkinson’s article begins in ancient Mesopotamia, providing an overview of beer history. To the shock of the modern beer snob, however, our criteria for good beer in 1974 mainly consisted of temperature and glass cleanliness; as for the variety, beer was beer in those days, long before the advent of craft-beer culture. To wit: “Fibber McKee’s, Potomac Avenue, Dormont, serves probably one of the best beers in Pittsburgh,” Wilkinson wrote before breaking down the construction of the bar’s tap system.

This article appears in the September 2019 issue of Pittsburgh Magazine.
Categories: From the Magazine, Hot Reads, Then/Now