The fast-casual restaurant and specialty grocery is the second location from the owners of Mediterra Bakehouse. 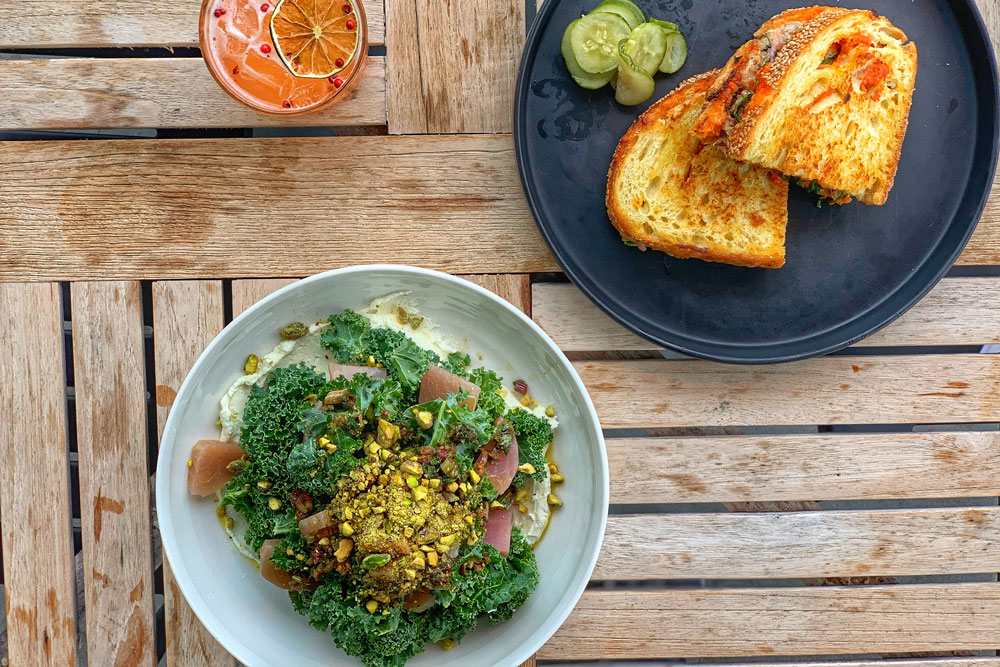 Nick Ambeliotis knows good food. He began his career in the retail food trade at his father’s Ohio corner grocery store. He left that business to work internationally as a fine-foods forager and importer prior to opening Mediterra Bakehouse in Pittsburgh in 2001. His family business now includes a 40,000-square foot Pittsburgh headquarters and acres of wheat fields in Arizona, and you can find its bread everywhere from farmers markets to Whole Foods.

The tug of that Ohio store never went away, though. For years, Ambeliotis envisioned opening a space that would serve as a hybrid fast-casual eatery and neighborhood specialty grocer. In 2018, he launched Mediterra Cafe in Sewickley. He viewed it as a pilot location for what eventually might become a small chain of storefronts. “Sewickley was the perfect size for us. And the community has really embraced what we are doing,” he says.

Now, he and his family have a second location.

After looking in various neighborhoods for a place to expand, Ambeliotis landed in Mt. Lebanon. He says the space was a perfect fit; it initially had been set up as a butcher shop and eatery called Block 292, and its most recent tenant, the excellent restaurant Fairlane, was forced to close in August due to the economic fallout of COVID-19. 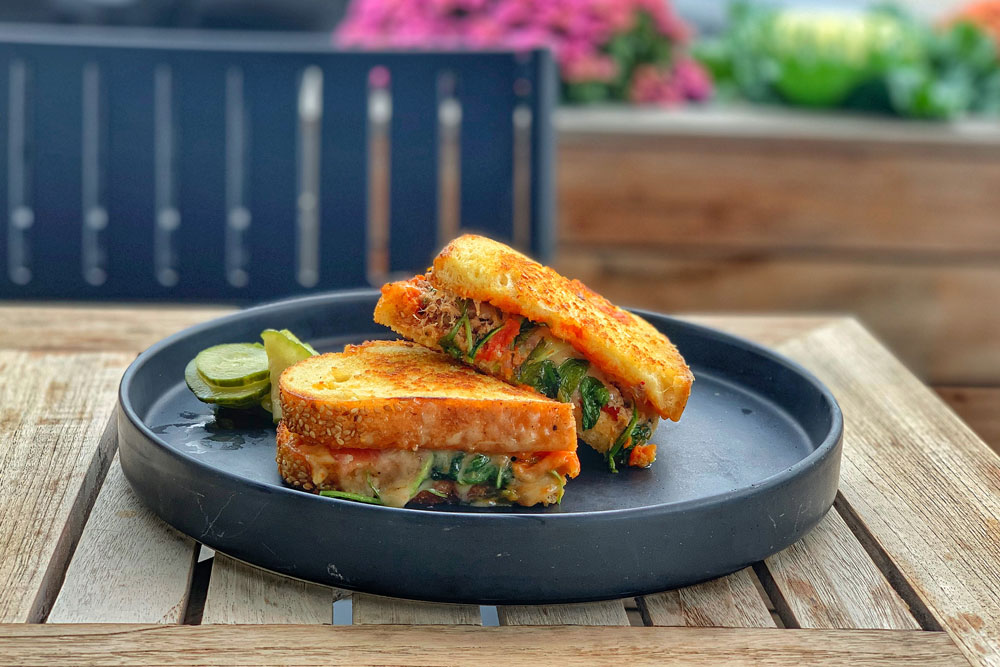 Aniceto Sousa is the executive chef and his menu, aside from a smattering of daily specials, is the same at both locations. There are all-day breakfast options such as porridge, french toast and a delicious breakfast sandwich. Sandwiches, salads and pizzas (Nick’s son Anthony Ambeliotis runs the bakehouse’s pizza program) make up the rest of the menu, and there are plenty of choices for kids, too. Sousa’s offerings are approachable — turkey and pastrami sandwiches are highlights, for example — but his dishes include some smart touches that set Mediterra Cafe apart from other fast-casual daytime concepts.

Tuna melts are easy to make but challenging to make memorable, and I like what Sousa is doing with his. It starts with quality ingredients — the oil-packed tuna is better than what you’ll find on most tuna sandwiches. Sicilian pesto olive oil and arugula contribute pleasant bitter vegetal notes, there’s cheddar cheese and pickled red onions to round things out — this is a well-balanced sandwich. It’s served on sesame semolina, and here’s the terrific thing about a restaurant that’s attached to a bakehouse: each sandwich gets the bread that’s right for it.

Those breads, and many more, are available for takeaway at both locations, and they’re very good. If your taste for baked goods veers sweeter, head pastry chef Aundrea Ambeliotis stocks the shelves with excellent cakes, cookies, galettes and pies. 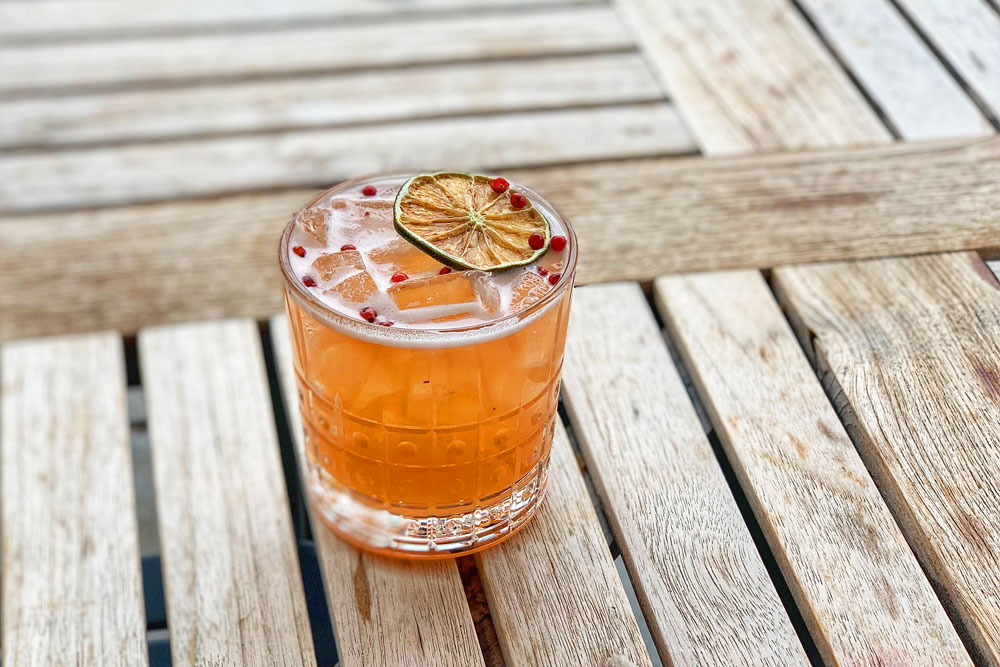 Two things set the Mt. Lebanon location apart from Sewickley: a liquor license and significantly more space. Christina Squillace is the bar manager, and she manages to pack a lot of flavor options into a six-item cocktail list. Among the highlights is a drink called Golden Hour, a balanced tequila cocktail with lime, pineapple, Aperol and pink peppercorns. Squillace’s bar program also includes a nice selection of beer and wine.

I love the flow of the Mt. Lebanon location. The layout offers a room that serves as a retail shop and another as a dedicated dining space, which can sit approximately 100 at full capacity. It feels spacious and breezy at the current state-mandated 50 percent. If you’re like me and are only dining outdoors right now, there is a small, heated courtyard that I found rather comfortable for lunch, even on a chilly November afternoon.

I’m smitten with the marketplace at Mediterra Cafe Mt. Lebanon. Ambeliotis’ history as an importer is on full display, with a fantastic selection of packaged goods including bottles of vinegar, canned tomatoes, tinned fish, olive oil, pasta and condiments galore. There’s a dairy case stocked with a large selection of cheese, many of them hard to find elsewhere in the region, as well as first-rate butters, eggs and milk. There are prepared foods, charcuterie and sausages, too. Short of fresh produce, you can find everything you want to stock up for some pretty special meals and snacks. “I try to channel my efforts into affordable luxuries that people will like. We’re trying to pick items now that will allow somebody, if they want to, to pick up what they would need for that night’s dinner when they come in for lunch,” Ambeliotis says.

As for the future, Ambeliotis says, “We’d like to do more of these. We have an army of very talented people. But I never think too far ahead of my current project, and I’m still in the middle of this one.”