Brandon Blumenfeld left a career as a restaurant chef to build a business based on a longstanding family culinary tradition. 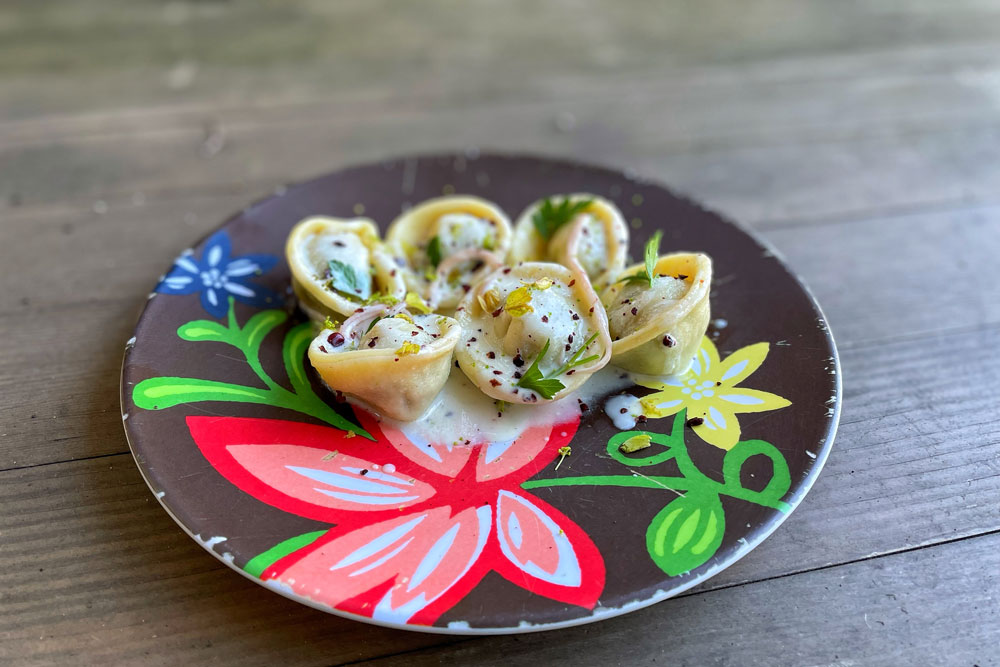 Brandon Blumenfeld spent the last seven years building a reputation in Pittsburgh as a chef who delivered soulful, seasonal and vegetable-forward cuisine, most notably as executive chef of Brick Shop and Scratch Food & Beverage. The fourth-generation Pittsburgher, who also worked as a chef in Pittsburgh at Spirit and Morcilla and in New York City at Momofuku Noodle Bar and Franny’s, had even started thinking about opening a restaurant, perhaps a Jewish deli.

But as he processed the arc of his career and the litany of systemic flaws throughout the hospitality industry, he started thinking it might be time to find a way to cook for people outside of the restaurant trade.

And then the COVID-19 pandemic struck.

“I was thinking about the restaurant and food industry so differently through this period. Even before this, I was unhappy with how disproportionate my life felt in terms of being indebted to the space I worked in and the people I worked for. It was always to please other people,” he says.

The more he thought about it, the more drawn he became to tapping into a family tradition that his great-grandfather Joseph Rosenbloom, affectionately known as “The Little Tailor,” brought to Ellis Island, along with a wooden mixing bowl and tapered table leg that he used as a rolling pin, when he emigrated from Poland in 1921: kreplach.

Kreplach are an integral part of the Ashkenazi Jewish culinary canon. The filled dumplings are similar to pelmeni, tortellini, uszka and its roots trace down the Silk Road to dumplings such as wonton (many Jewish-American kreplach makers even use frozen wonton skins as the wrapper for their fillings). In the United States, kreplach are most often eaten during Jewish holidays such as Purim, Hoshana Rabbah and Erev Yom Kippur to keep a connection to the old world. The dish has long-standing symbolic meaning to Jewish people, too.

Blumenfeld started distributing his kreplach to friends and family in March. “When I first got started in my home kitchen, testing them out and giving them to friends, it felt high stakes. Would people enjoy it? Would they even be interested in having these at home? You feel like you have so much invested in this little baby of an idea,” he says.

Blumenfeld accepted donations to cover the cost of his ingredients and time. To sell them, however, he had to work in a commercial kitchen. Curtis Gamble, owner of Station in Bloomfield, offered space for Blumenfeld to work during hours when the restaurant was closed, but even this took some time to get moving as it had to be inspected by the Allegheny County Health Department as a separate operation.

Scaling up from his home kitchen into commercial production has taken some figuring out, too. But the more he moves forward with the Little Tailor Dumplings, the better he feels about it. “You come at every step from different angles, trying to see if there are holes in the process. You’re gaining more information every time you do it. And you can see how quickly you were able to make 10 dozen as opposed to two dozen. You can see the progress you made in shaping them faster,” he says.

Blumenfeld says he’s limiting the fillings to one meat and one vegan batch per run, which he says has helped him hone in on the nuances of each batch. It also makes labeling easier. “Wholesale distribution of a product is so different [than developing recipes for a restaurant]. You might change your restaurant menu on the fly, but you can be vague enough on that menu where you can have your server explain what the dish is. With this, by law, if you have to state every single thing that’s inside the product,” he says.

The sturdy exterior of Blumenfeld’s kreplach is toothsome and perfectly chewy. His meat filling — a classic mix of chopped beef and onion — has just the right balance of juiciness from the beef and pungency from the onion. Kreplach are traditionally served in chicken soup, but they also can be prepared just about any way you’d plate a stuffed dumpling. I love them with a savory yogurt sauce or pan-fried and served with butter and onions like you would a pierogi.

The kreplach currently are available for sale on the Little Tailor Dumpling website and in the Bryant Street Market freezer case in Highland Park. And Blumenfeld has his sights set on widespread distribution down the road.

“We’re making steps in the right direction. I like the product and where it’s going. I like the branding. I like, most of all, that people have been enjoying what I’m making,” he says.