A Pittsburgh chef and his family continue to craft a family recipe with roots in Poland. 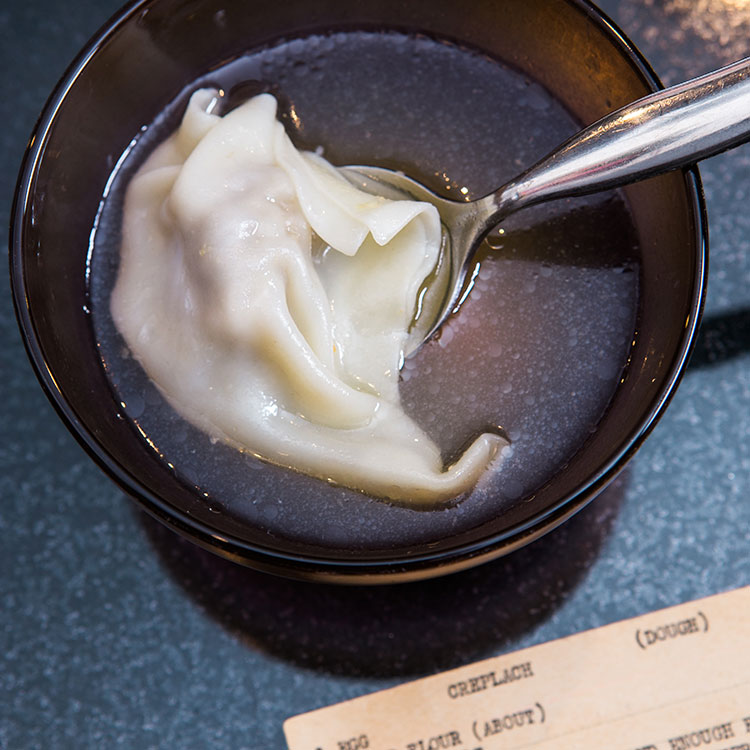 Joseph Rosenbloom didn’t bring much with him on his journey from Poland to Ellis Island to Pittsburgh in 1921. Among his few possessions were a tan wooden mixing bowl and a tapered, dark brown table leg that he used as a rolling pin. He brought those tools to prepare something he didn’t need a suitcase to transport to the new world — his kreplach recipe. 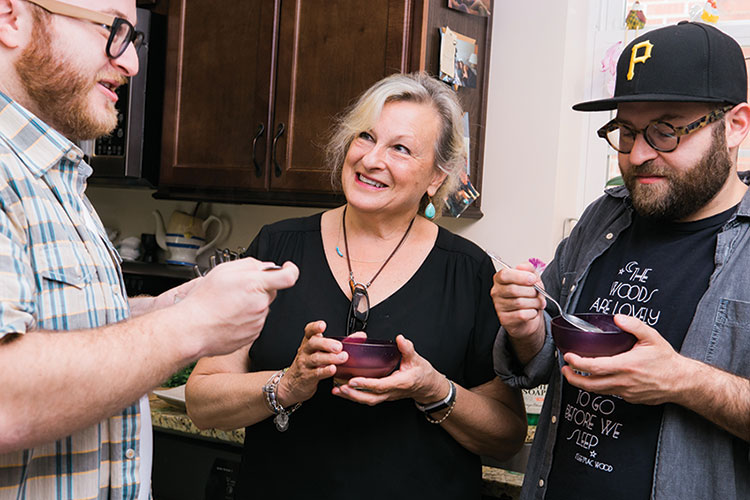 Kreplach is a boiled dumpling traditionally filled with minced meat or potatoes and almost always served in chicken soup (though it also is a treat rubbed with schmaltz and set under a broiler). The tasty triangles aren’t as widely known as another Jewish soup accoutrement, the matzo ball, yet their long history rings just as mighty in many eastern European Jewish kitchens as well as theose of the Jewish diaspora in the United States. “Every kreplach is basically made the same way. But everyone does something a little different with the filling,” says Rosenbloom’s granddaughter, Cheryl Blumenfeld.

​Blumenfeld has fond childhood memories of the ritual around Rosenbloom’s kreplach. “The Little Tailor,” as he was affectionately known, would mix eggs, flour and salt in his wooden bowl, then knead the ingredients until they were supple. After the dough rested for a half hour, he’d press the dough with his table-leg-turned-rolling-pin until it was an eighth of an inch thick. Then, he’d let the sheets dry until supple but not brittle. He cut the dough into squares, filled them with a mix of chopped beef, onion and egg, and folded the packets into triangles before boiling them for a few minutes. “We used to sit around the table and watch him make it. For him, everything had to be just right,” says Blumenfeld. 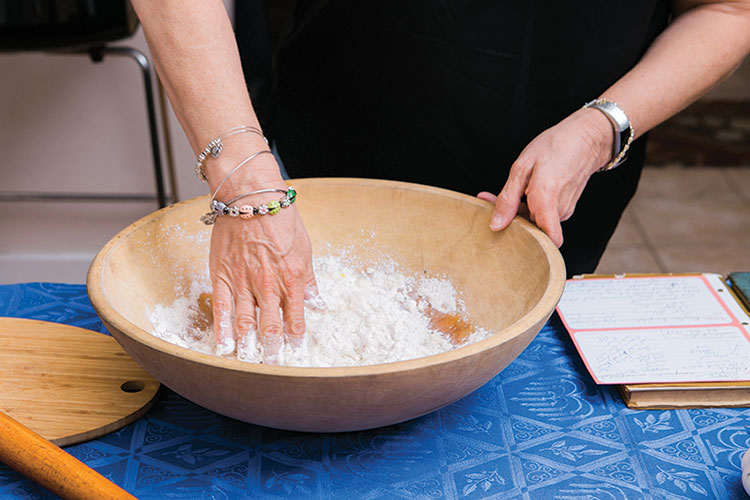 Over the years, family recipes were shared, swapped and sometimes stolen — 40 years ago, a distant cousin swiped the recipe box of Blumenfeld’s mother, Mildred Rosenbloom, a notable baker who once won the Pillsbury Bake-Off, while the family was sitting shiva following her death. Happily, an eagle-eyed Blumenfeld spotted the box 15 years ago and took it back home with her.

Joseph Rosenbloom’s love of cooking lives on today, most prominently in the fourth generation of the Pittsburgh family with Brandon Blumenfeld, executive chef of Scratch Food & Beverage in Troy Hill. He spent his childhood observing his paternal grandmother, Rochelle Blumenfeld, in her kitchen and learned how to cook from his mother. She taught him how to caramelize onions when he was 10. “I’d cut two onions up, caramelize them and eat them out of the bowl,” he says.

His Scratch menu is full of hyper-seasonal, comforting dishes prepared with a layered, contemporary touch. But, even if it doesn’t necessarily come across at the restaurant, his culinary roots as an Ashkenazi Jew are strong. “My grandmother died when my mom was 18. So I never got to meet her. I’d always heard she was this amazing baker and won all these awards. I asked my mom if she had any recipes, and we didn’t have them for the longest time,” says Brandon Blumenfeld, who now thumbs through the recipes and cooks one from time-to-time; he also cooks his paternal great-grandmother Rose Blumenfeld’s stuffed veal breast instead of turkey for the family’s Thanksgiving table. 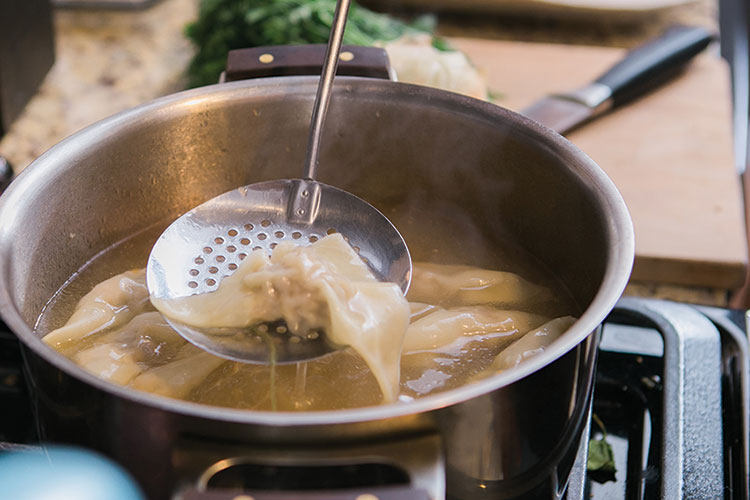 As for the kreplach, it now is a family affair. Every Rosh Hashanah, Cheryl’s cousin Cookie Elbling makes the chicken soup and another cousin, Carol Wolsh, prepares the kreplach. Cheryl still uses the wooden bowl and the table leg that Rosenbloom brought with him from Poland more than 80 years ago. “Multiple people are involved in making this one dish.

Everyone has their specialty. And it’s all for one meal on one night,” says Brandon Blumenfeld.

“Jewish holidays, Jewish homes, it’s all centered around food. It’s about tradition. It’s about passing it on from generation to generation,” says Cheryl Blumenfeld. 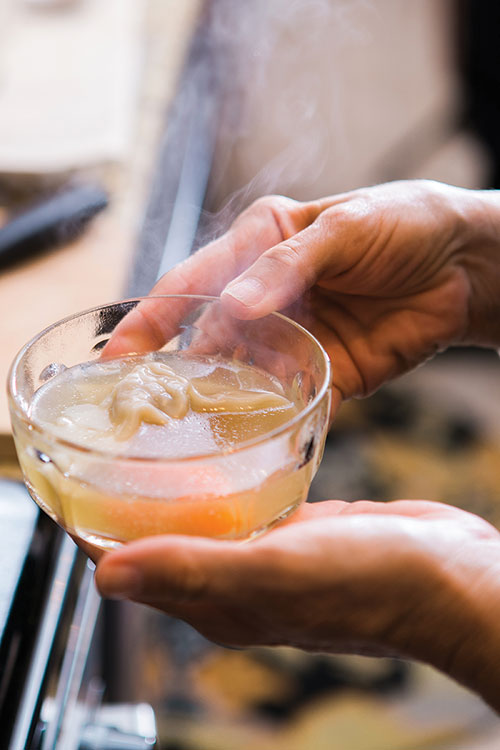 The Little Tailor’s Kreplach
This recipe is typed on an old note card.
Wrapper
1 egg
2/3 cup flour (about)
¼ tsp. salt

Filling
1 lb. chopped meat
1 tsp. onion juice
1 egg
salt and pepper
Beat egg slightly. Add salt and enough flour to make a stiff dough. Knead very well and let stand, covered for ½ hour. Roll out very thin and spread on cloth to dry for about an hour. The dough must not be sticky, yet it must not be dry, so it will break or be brittle. Cut as desired.
Note: To finish the kreplach, cut the dough into 2-inch squares. Place a teaspoon of the beef mixture (we like an 80/20 blend) in the center of the square, fold into a triangle and press to seal. The kreplach should be cooked for three minutes in boiling water. Serve in chicken soup.

This article appears in the August 2018 issue of Pittsburgh Magazine.
Categories: Eat + Drink Features, From the Magazine