Pete Aiello, scion of one of Pittsburgh’s most notable pizza families, aces a variety of styles at his Westmoreland County pizzeria. 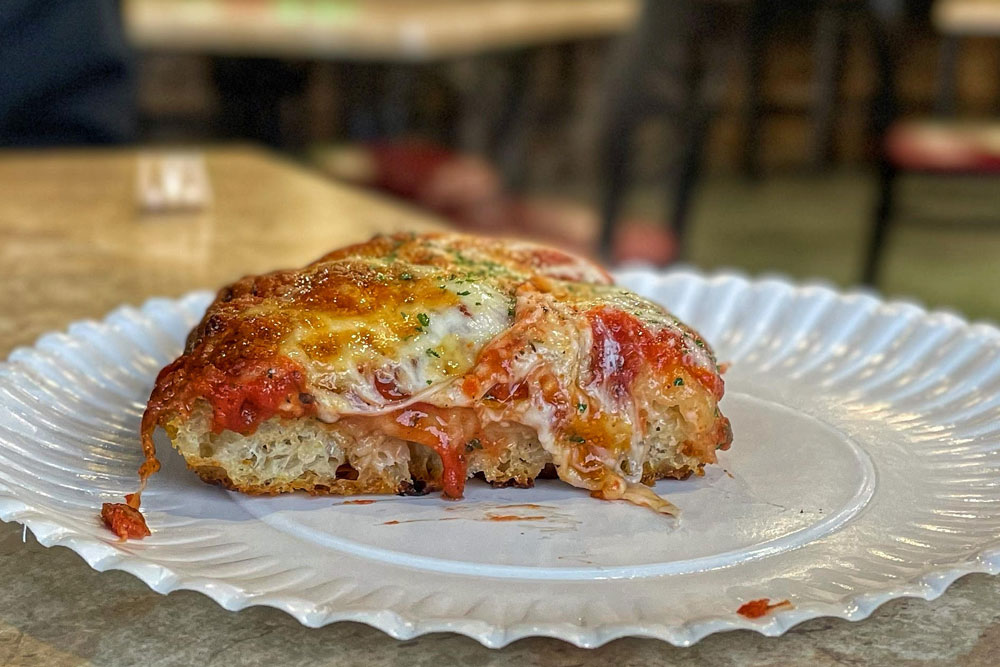 The Sicilian pie at Aiello’s Pizzeria LLC has a crispy and crunchy inches-thick crust with a whispered aromatic backdrop of fermentation that bolsters its depth of flavor. The rectangular tray pie is hewed into 16 cuts with creamy, slightly sour mozzarella tampering the richness of a well-proportioned layering of herbaceous tomato sauce. You’ll find yourself eating more than you planned. Unless you’re with a group, you’ll still likely have some to take home. You’ll be happy for it — this is quality craftsmanship that is just as good reheated late-night, or the next day.

The Sicilian is just one outstanding permutation on a roster of pizza styles prepared with gusto by owner/pizzaiolo Pete Aiello. He’s spent a lifetime in the pizza trade. Now, he’s crafting a variety of destination-worthy pies that land his pizzeria squarely in the region’s top tier.

If Aiello’s last name sounds familiar, that’s because he’s the scion of one of Pittsburgh’s most famous pizza families. Aiello’s Pizza, the iconic Squirrel Hill pizza joint, was founded by his late father, Giuseppe Aiello, in 1978. 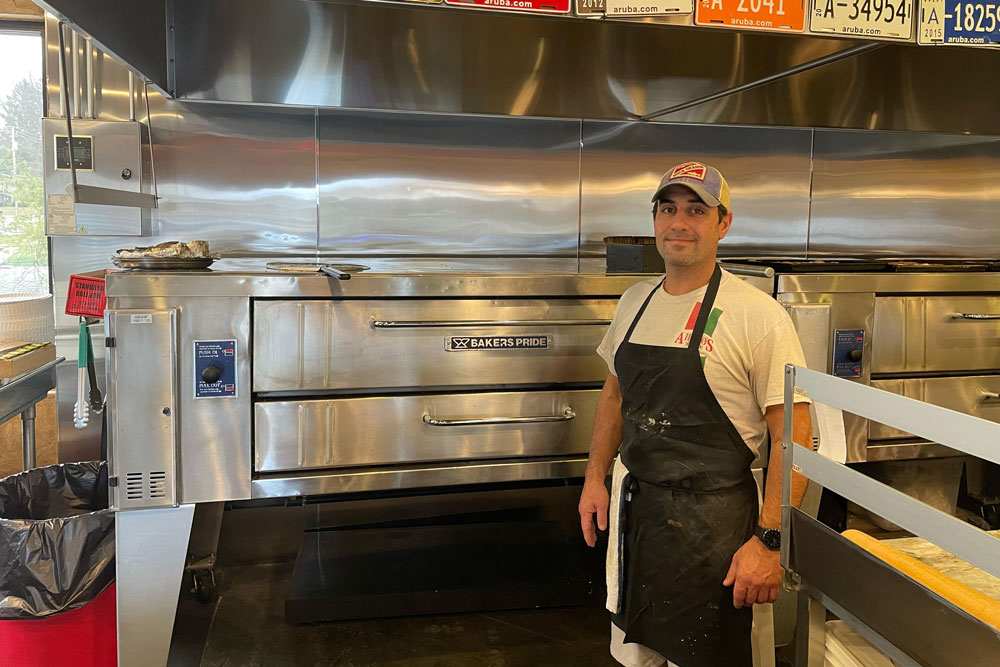 Pete grew up in the family business and he caught a passion for pizza early in life. “I was 8, 9 years old standing in front of a sink with a mixing bowl,” he says.

However, he says, he always felt like the outlier of the pack.

Aiello was living in Westmoreland County in 2014, and he felt that by opening in Harrison City there would be enough distance between him and the Squirrel Hill location to strike out on his own. However, legal disputes and family feuding over naming rights followed his opening.

“My last name is Aiello. It wasn’t like Joe Smith was trying to take the Aiello name,” he says.

The two sides settled out of court, allowing Aiello to use the family name but distinguish his business as an LLC and use the term “pizzeria” rather than “pizza.” According to Aiello, everything is, while not copacetic, at least cease-fire. “It’s fine. I don’t talk to them and they don’t talk to me. They do their thing and I do mine. And that’s how it is.”

Aiello says that what drives him is his ongoing quest for technical expertise and obsession with quality ingredients. 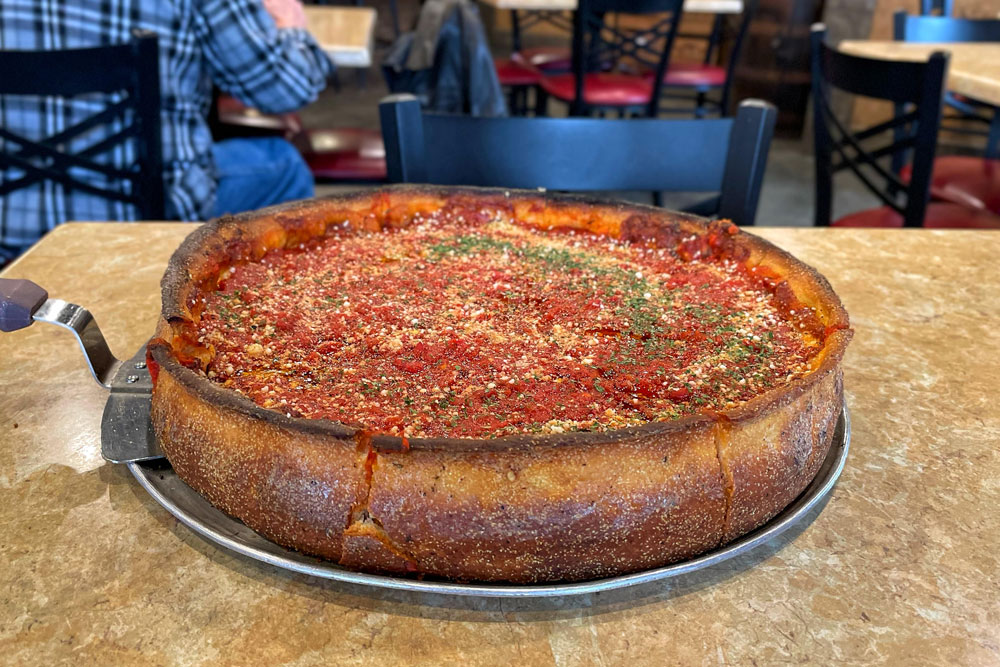 His Chicago-style deep dish is one of the best versions I’ve ever had. The buttery crust is sturdy yet has a tender snap, with buttery flavor and a hint of pebbly crunch from cornmeal. The casserole of sausage, pepperoni and gooey cheese, topped with vibrant, tangy tomato sauce, grated Parmesan cheese and oregano, will have you swimming in pleasure, particularly when you find the river of melted cheese close to the bottom of the crust. The hefty pie, weighing more than 11 pounds, comes in one size only, so bring some pals or take one home to feed the family. The pizza takes about an hour to prepare, so it’s a good idea to call ahead if you’re craving one.

Aiello starts working at 5:30 a.m. six days a week, mixing dough by hand using a method he learned from his father.

“When you mix dough by hand you get a feel for what’s happening each time. You get a lighter crust. The crumb is better. You can’t do that with machinery. It’s a lost art now,” Aiello says. 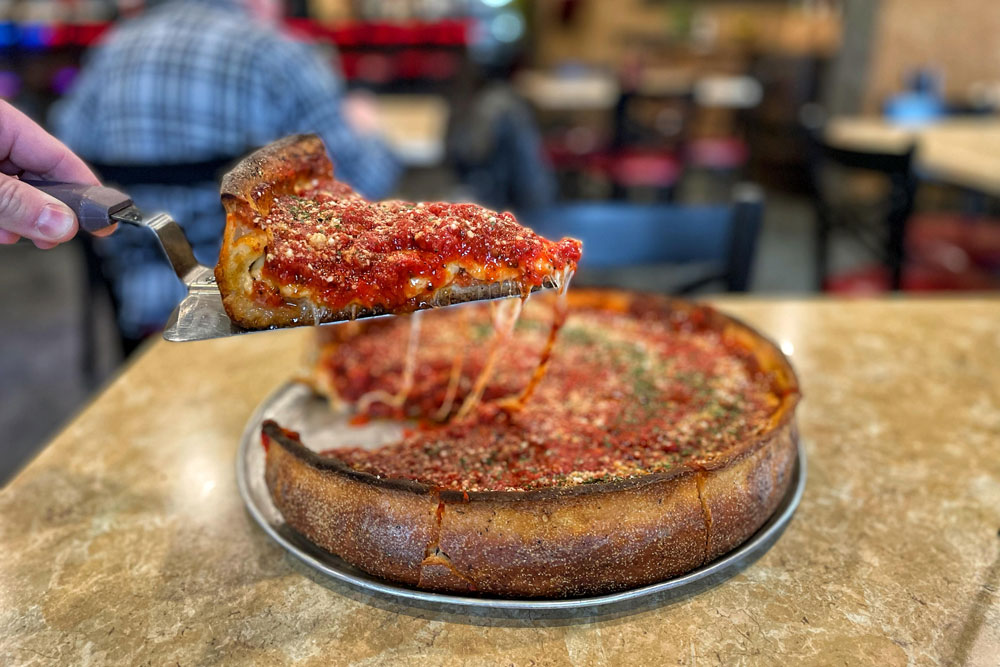 Each style of pizza gets a different blend of flour, which comes from Italian and domestic mills. That Sicilian pizza, for example, receives a higher proportion of strong bread flour to achieve the tray pizza’s characteristic airy crunchiness. Meanwhile, he uses a lower protein content flour for his deep dish, which, combined with organic leaf lard, is tough enough to withstand the weight of the ingredients yet still.

He begins the process with pre-ferment such as a biga or poolish and then lets the mix ferment for up to 96 hours depending on his structural goals as well as the ambient temperature and relative humidity of the day. What’s great about this long-fermented method is that not only are his pies extraordinarily flavorful, the long fermentation also means they don’t weigh as heavy on the stomach as a made-that-morning pizza dough.

The same drive to choose the best ingredients for each pie follows to his choice of tomatoes — always whole, canned fruits that are ground in-house — which vary from bright and tangy California tomatoes for the deep dish to rich, sweet, imported Gustarosso D.O.P. San Marzano tomatoes Campania, Italy for his artisanal pies. Aiello shreds whole milk mozzarella from blocks, and he pulls his own fresh mozzarella from curd for some pizzas, too. 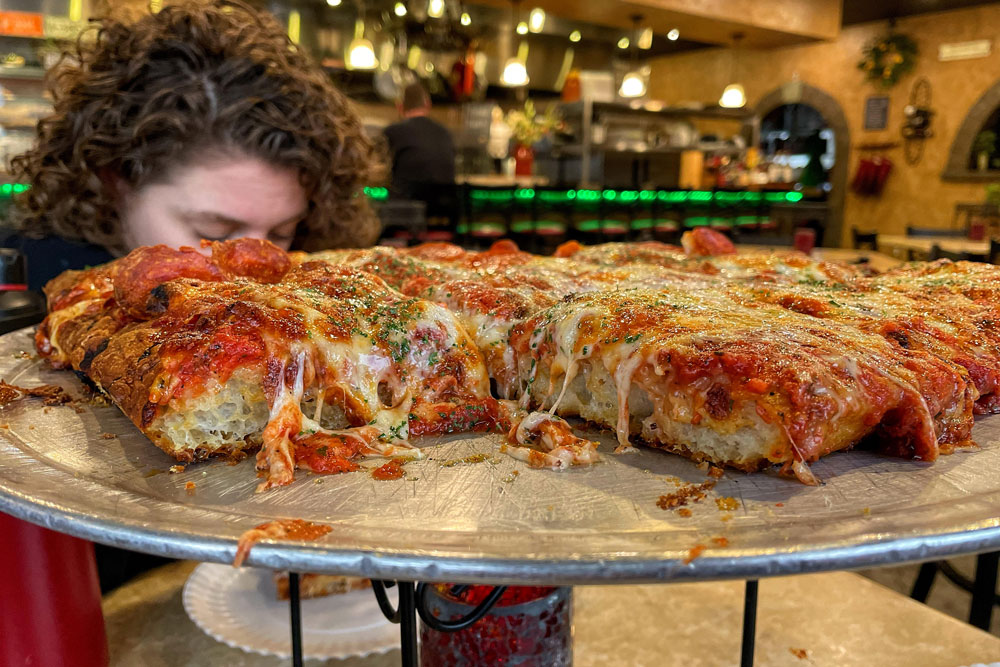 Aiello says that one of the most important things he does is paying attention to the little steps before and during the bake. He waits to add raw, seasoned tomato atop the deep-dish pies until the final 15 minutes of cooking because, he says, “it’s like slop otherwise.” He tops the Sicilian with a 50-50 mix of water and tomato for the final two hours of proofing, a technique he learned from the owner of a former pizza shop called Mamma Lucia’s in Northway Mall. “It sucks the mix right into the dough, which gives it more flavor and texture,” he says.

On my second visit to Aiello’s, I watched him pull a Detroit-style pizza from the oven, and it looked picture perfect. He started working on the now-popular pan pizza, beloved for its caramelized Wisconsin brick cheese latticed edges, eight years ago, and he says he feels pretty homed in on the right way to make it. Now, he’s looking to perfect a cracker-thin tavern-style pizza prevalent in Chicago and Milwaukee; it’s not on the menu yet, but Aiello says he’s getting there. I’m ready for it.

“I’m beyond obsessed with making pizza. If you care about what you do, if you want to be great at what you do, you have to be there doing it,” Aiello says.