Can Customer Expectations Meet the Reality of Restaurant Staffing?

As Pittsburgh area restaurants struggle to staff up to pre-pandemic levels, customer behavior is beginning to fray around the edges. 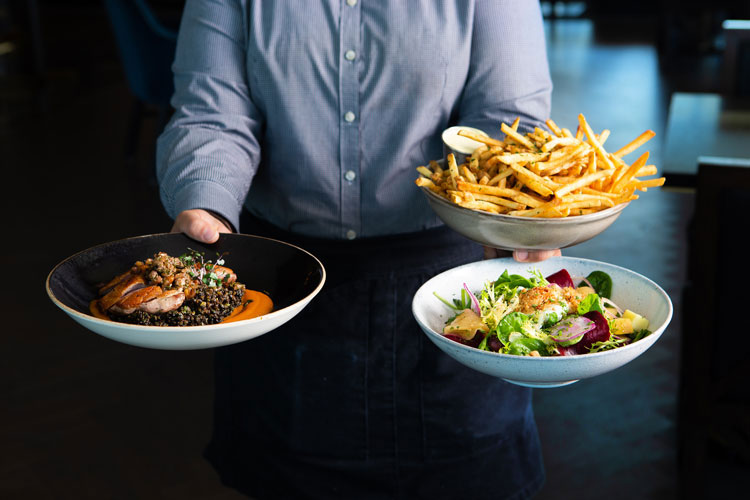 During the last few months, the comportment of a segment of diners has worsened as restaurants reopened for full dine-in service.

How bad is it? Last week, The Wall Street Journal published an article titled, “Restaurant and Hotels Push Back Against the Uptick in Customer Tantrums.” In September, Food & Wine Magazine posted an infographic on its Instagram page called “The New Rules of Dining Out” with directives such as “The Customer is Not Always Right” and “Patience, Patience, Patience.” Rule 10 is “Be Kind,” reminding adults going to dinner the same thing we might tell a child on the first day of school. Yikes.

“It’s absolutely crazy what’s going on. I’ve never been this stressed out in my life. It’s a constant game of emotional Russian roulette. You just don’t know what table is going to be happy, upset or whatever,” says Fiore Moletz, executive chef and co-owner of Della Terra in Zelienople and Burgh’ers Brewing, which has locations in Zelienople and Lawrenceville.

Most Pittsburgh restaurants are short-staffed. The lack of staffing forces establishments to augment service with compressed menus, shorter and, possibly, irregular hours and longer wait times for meals to come to the table. People are also paying more for those meals, as the rising cost of everything from ingredients to typically unseen necessities such as sanitation services translates into higher menu prices. On top of that, hosts, servers and general managers are tasked with enforcing COVID-19 safety measures such as masking, physical distancing and proof of vaccination status to a pandemic-weary public.

“People outside this industry don’t necessarily understand the supply and staffing issues we’re having,” says Amy Beatty of The Warren Bar & Burrow, Downtown.

Of course, people choosing to visit restaurants have every reason to count on having a smooth time while they’re out. So it’s fair to feel disappointed that the buzz of returning to gathering in social settings is dimmed by having to flag down a server to order another round of snacks and cocktails. If you’re paying a couple of bucks more for that chicken sandwich, it’s reasonable to expect it to arrive hot and crispy.

“I get it. It isn’t exactly the way you were hoping it was going to be or like it was before the pandemic. But we are victims of the circumstances as much as your experience is. Nobody wants to come to work and have a bad service. We’re not doing this to you on purpose. We’re doing the best we can,” says Curtis Gamble, executive chef and co-owner of Station in Bloomfield.

Pittsburgh’s hospitality industry professionals report that most diners are kind, or at least tolerant, when things don’t go as expected. But they say that those that aren’t — and there are more of them than ever — are responding with verbal attacks or taking to social media to wage war over small things. Hosts are yelled at for enforcing publicly available mask and vaccination policies; servers are dressed down for a soup that didn’t arrive speedily and diners are demanding their appetizers get comped because nobody checked in on them for 20 minutes. Another segment of the dining populace is weaponizing peer review websites such as Yelp, given a low star rating because the establishment ran out of certain menu items or refused to split a check for a large group individually.

“You get these reviews that say the food was good, the atmosphere was great. But everything was slow, so here’s your two stars,” says Beatty.

It’s hard to say precisely why this is happening — there isn’t yet enough data to back any specific theory — but hospitality industry veterans believe factors such as repeated slow experiences (an outburst might not happen the first time something goes awry; it will on the third) and the overall hyper-politicization of life right now are part of what’s driving it.

“The smallest thing will set a table off,” says Moletz. “Serving and cooking are respectable jobs. Why is there a perception that people can be treated like scum just because you’re working in a restaurant?”

Repeated rude behavior is demoralizing restaurant workers throughout the region, something that’s in line with a nationwide trend. An August report from the restaurant industry data analytics firm Black Box Intelligence called “The post-pandemic restaurant employee: Who wants to work and why” that surveyed 4,700 current, past and potential restaurant industry workers, 62% of respondents report having experienced emotional abuse or disrespect from customers (and nearly 80% say their mental health had been negatively impacted in the past 12 months).

Most experienced hospitality industry workers who chose to stick around through the pandemic say they are committed to riding out the wave. But the newcomers, the people who are needed to restaff the restaurants, don’t have the same incentive to stick around, even if wages have gone up in recent months.

“How do we teach that to our new hires, when they don’t know what the industry used to be like before all of this? How do you keep people when guests throw a temper tantrum because you have to enforce rules about masks, or they have to wait a little longer for their meal?” Hillard says.

Restaurants are trying various ways to manage expectations, such as limiting the number of available tables to ensure a smoother service for guests (though this sometimes has the unintended consequence of a potential walk-in throwing a tirade because they see empty tables but are told they can’t be seated) or letting people know upfront that the meal might take a little longer than expected. Staff are feeling more empowered to let customers know when they are crossing a line, too. And management, at many places, is backing them. “I’m not invested in someone’s temper tantrum. I just want to make sure that the people who work here feel good about their jobs,” says Gamble.

Supporting a restaurant isn’t a charity operation — diners are entitled to a reasonable expectation that the food and drinks they ordered are prepared with attention to detail and served in a relatively timely fashion. But the reality is that until restaurants can fill in the gaps and new staff are trained to work with the fluidity of industry veterans who have moved on to other jobs, it’s a good idea to take a breath and reflect on how you’re going to let someone know your dinner isn’t going as you hoped it would.

Things will, eventually, level off. Until then, Hillard says, “The collective trauma of what we’ve all gone through has and continues to affect all of us. So have some empathy. We are trying to get our bearings again. We love providing comfortable, warm spaces for people. We want to be there when you want to get out of the house, when you want to blow off steam. We want things to go well. But right now, you have to meet us in the middle to some extent.”